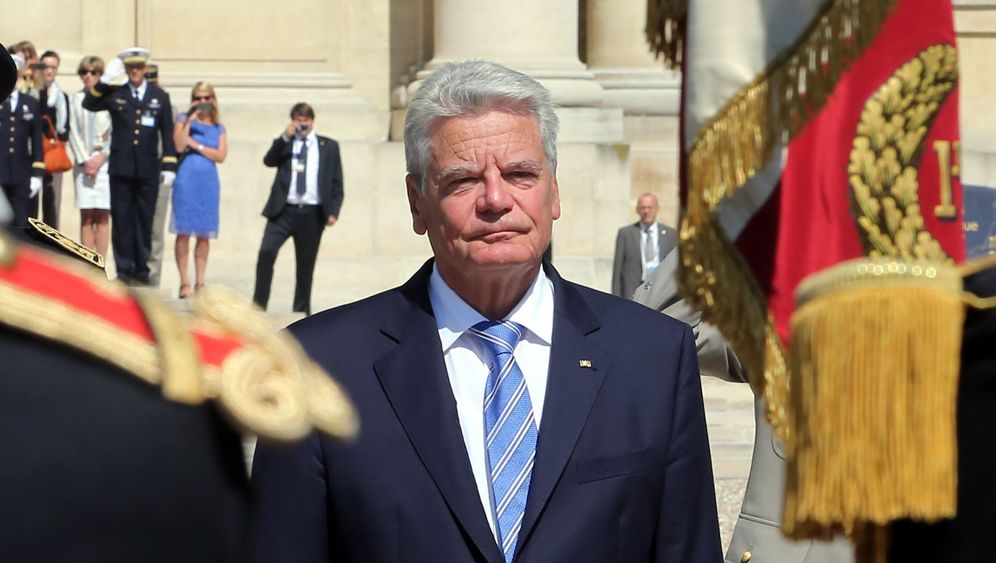 German President Joachim Gauck has commemorated Nazi crimes across Europe. In 2012, he visited Lidice, a Czech village completely destroyed by the Germans in 1942. He also paid his respects to the at least 560 people killed by the Waffen SS in the Italian village of Sant'Anna di Stazzema in 1944. In the Dutch city of Breda, on the anniversary of the liberation from Nazi Germany, Gauck honored those who lost their lives in the German occupation.

Now he is visiting Oradour-sur-Glane.

A high-level German representative has never been to the central French village, which lies northwest of Limoges. And 10 or 15 years ago, people there say it probably wouldn't have been a good idea. Germany and France may be celebrating 50 years of friendship this year, but that won't bring Oradour-sur-Glane back to life. On June 10, 1944, members of the Waffen SS massacred 642 people there, shooting residents with machine guns, and then torching the village in reprisal for attacks by the resistance. Anyone who had survived the hail of bullets died in the flames.

Just six people survived the massacre in Oradour-sur-Glane, the ruins of which still stand today in quiet admonishment. When World War II ended, then President Charles de Gaulle ordered that the site be preserved as a memorial to the victims.

Gauck insisted on going to the site, which he will visit on Wednesday afternoon with French President François Hollande for a tour with a survivor before meeting with representatives of victims' families and giving a speech. "I will not hide what is in my heart," Gauck said after arriving in Paris in a joint press conference with Hollande.

The German president, whose position is largely symbolic, was born during the war in 1940, and wants to show the French what he has already relayed to the Czechs, Italians and Dutch. That what the Germans did here weighs heavily upon him, but also that Germany is a different country now -- though it will never forget its crimes.

An Uncomfortable Chapter of History

Gauck is making the first state visit to France by a German president since Roman Herzog in 1996. And the fact that he is going to Oradour-sur-Glane made a few waves in the country. That's partly because the name of the village, which was rebuilt just 500 meters away from the memorial site after the war, also represents a sensitive chapter of French history.

During the war, men from the Alsace -- a region on the German border that has historically been passed between France and Germany, and was occupied by Nazi forces in 1940 -- served under the soldiers in an SS Panzer Division called "Das Reich," which was responsible for the massacre. Whether the Frenchmen fought for Hitler voluntarily or were forced to become murderers remains disputed in France to this day.

According to Hollande, the visit to the site with Gauck was his own idea. But given the domestic difficulties surrounding Oradour-sur-Glane, one could have doubts about this. Indeed, the visit has sparked an uncomfortable discussion, with the association of war orphans in the Alsace region calling for the president to commemorate the fates of the forced recruits, for example.

A guest like Gauck can be difficult, something Hollande may have thought after his arrival on Tuesday. Naturally, Gauck praised Hollande and the close German-French partnership in the ostentatious press conference room at Elysée Palace, and at the state dinner in the equally ornate banquet hall at the presidential residence. But Gauck often follows praise with exhortation. "I am among those people who are pleased when concrete steps toward consolidation and reform are taken," he said. That, however, is precisely what France has failed to do.

While central Paris may be characterized by more pomp than practically any other European capital, just a few kilometers away things look very different. There has been little economic progress, unemployment is growing and state finances are out of control. Of course, having succeeded nearly a decade and a half of conservative rule, there is only so much President Hollande, a member of the Socialist Party, can do. Nevertheless, he is still expected to tackle the problem -- not least of all because Europe needs a strong France. So far, though, Hollande has done little, mainly out of fear those steps will place him in direct conflict with his own party. Hollande is aware of how difficult things were for former German chancellor Gerhard Schröder and his center-left Social Democrats when he launched his Agenda 2010 economic reforms in 2003, which pared back the social welfare system, cut unit labor costs and helped fuel an economic comeback.

Gauck likes to praise Schröder's economic policies, and during the banquet he said to his host: "Reforms -- that's an easy word to say. But changes have many small enemies: fear, complacency, and deep-seated influences stand in their way."

It was a statement without condescension. "I bear no malice toward France," he said, adding something likely to be unpopular in Berlin. It wouldn't be long, he suggested, before "we'll be having a reform debate in Germany." The next round of reforms is needed in the country, he said, and Germany is "no island of bliss."

Of course, that won't make things any easier for Hollande.