Popping champagne bottles and chanting, "Maggie, Maggie, Maggie, dead, dead, dead," hundreds of people gathered in cities around Britain on Monday night to celebrate the passing of former Prime Minister Margaret Thatcher, a woman who had a deep, divisive and lasting impact on Britain.

But their cheers have been drowned out by tributes to the "Iron Lady" from political allies and adversaries alike, in Britain and around the world.

In Germany, former Chancellor Helmut Kohl, frail, wheelchair-bound and suffering from slurred speech, made a rare appearance to praise her, even though their relationship had been an uneasy one and she did not support German unification after the fall of the Berlin Wall in 1989.

"She was a great woman," said Kohl. "I am full of respect and awe." He described her as one of the most "consummate British prime ministers that ever lived. In many situations and disputes over the economy, she stood her ground."

On Tuesday, German newspapers look back on Thatcher's legacy with commentaries highlighting the force of her personality and the huge impact she had domestically and internationally. Some conclude, however, that her policies were too radical, and that Thatcherism no longer offers the answers to the economic problems of today.

"If it didn't sound disparaging to many ears, one could say that it was her incorruptible housewife's common sense that enabled her to act so resolutely. Her path from reaching a decision to taking action was a short one."

"When she came to power, she faced a Britain that was still stuck in old dreams of being a world power while blocking its own progress through the almost archaic power of the trade unions. With aplomb, she curbed the might of the unions and hauled the country out of its royal socialist slumber. She massaged the nation's soul with the Falklands War, which fed the illusion that Britannia still wielded some power in the world."

"But with Margaret Thatcher, as with others, the flipside of her great strength was a weakness. She helped ready Britain for the growth of financial market capitalism -- and helped drive her country to the brink of deindustrialization. She slapped limits on EU expansionists and kept a sharp eye on efforts to turn the EU into a superstate -- and in doing so discredited the EU in her own country. Without her steadfastness, Ronald Reagan's strategy against the Soviet Union may not have succeeded -- but when it came to German reunification, she, a child of World War II, remained insensitive and negative."

"The social coldness that is making Britain shiver once again today is her legacy, just as much as the fact that people from lower social classes can rise to positions that were previously closed to them. It was a Conservative of all people who radically shook up the British class system."

"After her forced resignation in 1990, she was asked what she had changed as leader of the country, and she answered with one word: "Everything."

"That wasn't wrong, but it was so immodest, so un-British, so devoid of all understatement that it almost seemed ill-mannered. But that one-word, crowing answer probably provides the key to understanding this woman. She was never the cool Briton, the well brought-up daughter of strict parents with strict rules and regulations. She was always a rebel."

"Very few people get a political ideology named after them. Thatcherism stands for deregulation, privatization and the destruction of the welfare state, as well as of a sense of community. No one divided British society as much as former Prime Minister Margaret Thatcher. She is responsible for the destruction of the trade unions and the ruin of the public sector, and especially of the National Health Service."

"One of her first acts in office was a gift to the rich: she lowered the top tax rate from 83 to 60 percent. At the same time she raised the value-added tax from 8 to 15 percent. She pushed through this upward redistribution of wealth without prior consultation with her cabinet."

"Thatcher got away with her authoritarian leadership style for a long time. She publicly snubbed difficult colleagues, or just sacked them. During her time in office she used up more than 100 ministers and surrounded herself with yes-men. The hope that she, as the first female leader of a major nation, would fan a feminist wind into politics went unfulfilled. She was never interested in the women's movement, and only one women made it into her cabinet during her long tenure."

"The prime minister's most momentous act was perhaps the 'Big Bang' with which she liberalized Britain's strictly regulated financial sector. The move triggered the massive boom of the City of London and made a lasting impact on Britain's economy. Freed from all their chains, traders and bankers gave the entire economy fresh momentum: Between 1993 and 2006, the British economy grew by 2.8 percent on average per year while unemployment fell from nine to four percent."

"But since then, the world has learned the extremely painful lesson that absolute faith in self control and the self-healing power of free markets was a mistake. The Big Bang was followed by the Big Bust. Thatcher's laissez faire dogma was the intellectual basis for the wild growth of the financial sector that ended up leading to a major crisis."

"Now Britain is paying the price for the one-sided faith of its politicians in the service sector. Today Prime Minister David Cameron and his Finance Minister George Osborne are enviously looking at the industrial core of the German economy. The structural change after the financial crisis has hit Britain hard and its economy has been on the brink of recession for many quarters. With his rigorous austerity policy, Osborne is trying to repeat the Thatcherite economic miracle. But this time the people don't regard scaling back the government as liberation. They know that the entire country has to tighten its belt after the excesses of the boom era. The recipes of the Iron Lady have lost their effectiveness once and for all." 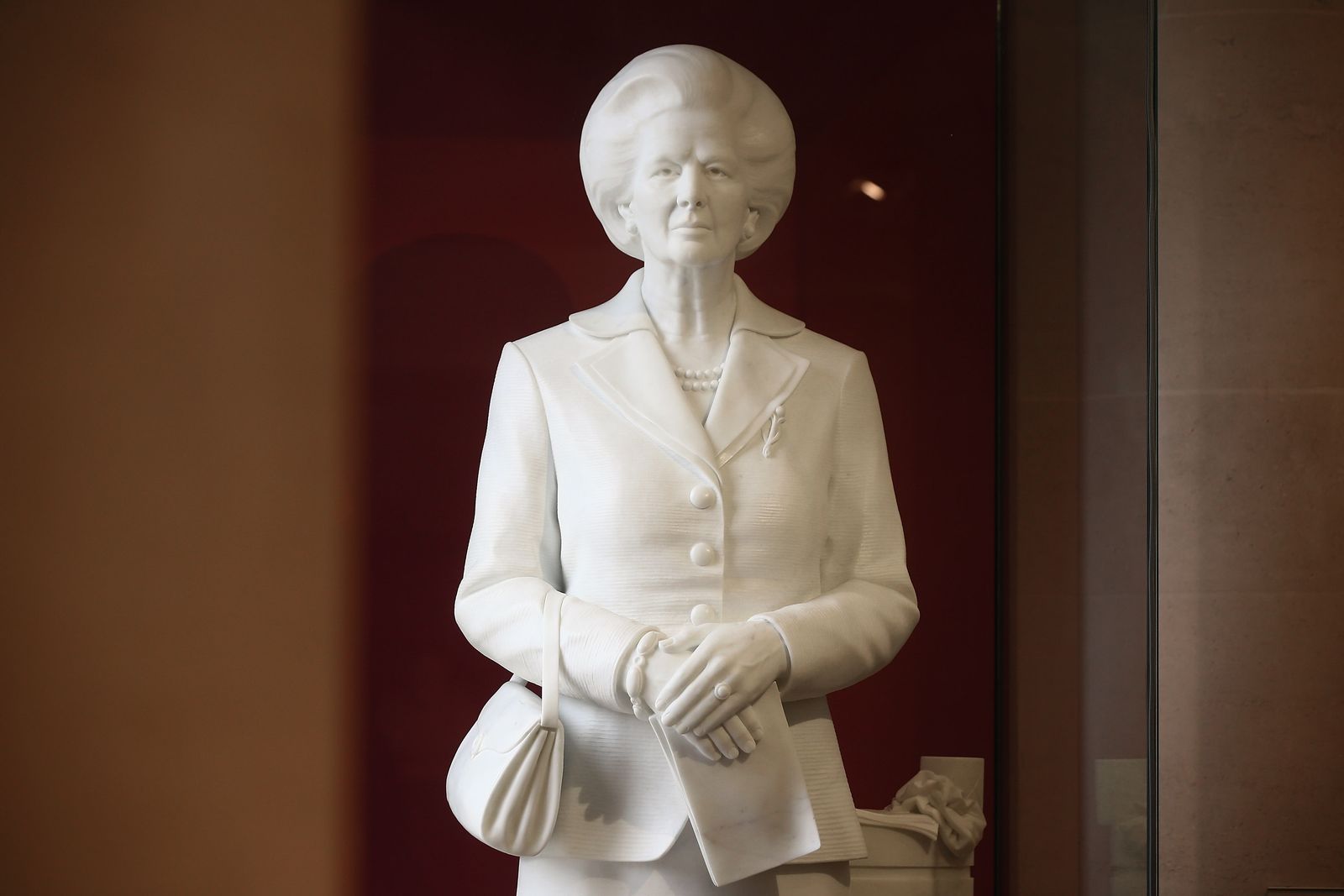 A statue of the former British Prime Minister in London's Guildhall Art Gallery.