Italy faces political stalemate after its election left no group with a clear majority in parliament, effectively making the euro-zone's third-largest economy ungovernable at a time when it urgently needs to continue reforms.

Predictably, Italian share prices fell and government bond yields rose on Tuesday. The euro fell as far as $1.3042, its lowest since Jan. 10. Investors around Europe and worldwide have been spooked by the election outcome, which has the potential to reignite the euro crisis.

They are unlikely to be reassured by a suggestion on Tuesday from former prime minister Silvio Berlusconi that his center-right might be open to a grand coalition government with the center-left bloc of Pier Luigi Bersani, which has secured a majority in the Chamber of Deputies, the lower house of parliament, but not in the upper house, the Senate.

Any coalition government must have a working majority in both houses to be able to pass legislation. German media commentators note on Tuesday that more than half of Italian voters backed two populists -- Berlusconi and comedian Beppe Grillo with his anti-establishment Five-Star Movement -- who told people what they wanted to hear, rather than the simple truth that Italy will have to keep on tightening its belt and reform its economy to maintain investor confidence and be able to cope with its burgeoning public debt.

Grillo's party won the most votes of any single party, with 25 percent of ballots cast. He wants Italy to hold a referendum on remaining in the euro. He also wants cuts in politicians' privileges, a minimum income for the unemployed, clean energy and free Internet access.

"Silvio Berlusconi ruined Italy -- a founding member of the European Community -- and brought it almost as close to bankruptcy as Greece. One had hoped that he wouldn't get another chance after a lean but necessary year of reforms under Prime Minister Mario Monti. He probabably won't get that chance -- but he succeeded in at least getting close to the winning Democratic Party. It is worrying that voters didn't punish this jester by ignoring him."

"In the campaign he promised the abolition of the IMU real estate tax and even the repayment of the taxes already paid under it. The failure to punish such nonsense casts a bad light on a country that requires a fundamental political renewal. If you count the results of the Five Star Movement of the rabid Beppe Grillo, who has been preaching wild hatred of the 'freeloaders up there,' then more than half of Italians voted for some form of populist. This amounts to an almost childlike refusal to acknowledge reality."

"The Italian election has a special lesson for everyone involved in the euro crisis: If you hesitate, you lose; if you hum and haw, you get punished; and half-measures don't count. Italian voters left a simple message at the ballot box: We haven't understood. One can't criticize them for that, they live in a political climate that rewards half-truths and elevates satire to state reason."

"Two comedians stood in the election campaign and were rewarded for their defamatory shouting: Silvio Berlusconi and Beppe Grillo. How could that happen? Because the serious politics in the form of technocrat Prime Minister Mario Monti and the center-left candidate Pier Luigi Bersani hesitated, hummed and hawed and resorted to half-measures."

"Without Monti's pledge of a return to seriousness, Italy as a euro nation wouldn't exist anymore today. But this blunt message hasn't reached Italy. No, it wasn't the austerity-obsessed Germans who forced Italy to tighten its belt. It was the circumstances, the markets, it was the political and economic conditions in the country itself that left Monti with no other option than to tackle reforms and reduce the ludicrously high debt levels."

"Now populism, yelling and lies rule Italy once more. In the Greek election dramas of recent years it was the radicals who profited from the crisis. In Italy it has been the populists. They're radical too in their ways: They deny reality, they pass blame for the misery to enemies outside the country, they witter on about the simple solution to all the problems. Italy won't get a simple solution after this election. It will get a new election at most. And that wouldn't be a blessing either."

"The road from this election result to the formation of a government is difficult in a two-chamber system with fragile parties vulnerable to blackmail by splinter groups. Even if enough support emerges for a center-left alliance, this election is a signal: half the Italians voted for aggressively anti-European platforms. That's an alarming signal that rings out beyond Itay's borders."

"Italy is ungovernable. But that's only the one side of the Italian drama. The election also shows that Italy remains vulnerable to populist rhetoric. The 25 percent support for the hackneyed outbursts of rage by the antiparty party of comedian Beppe Grillo prove that. As does the 30 percent for Berlusconi. More than one in two Italian voters succumbed to populist temptations. A pretty eerie thought that doesn't bode well for Italy's future. The Berlusconi disease is far from being cured." 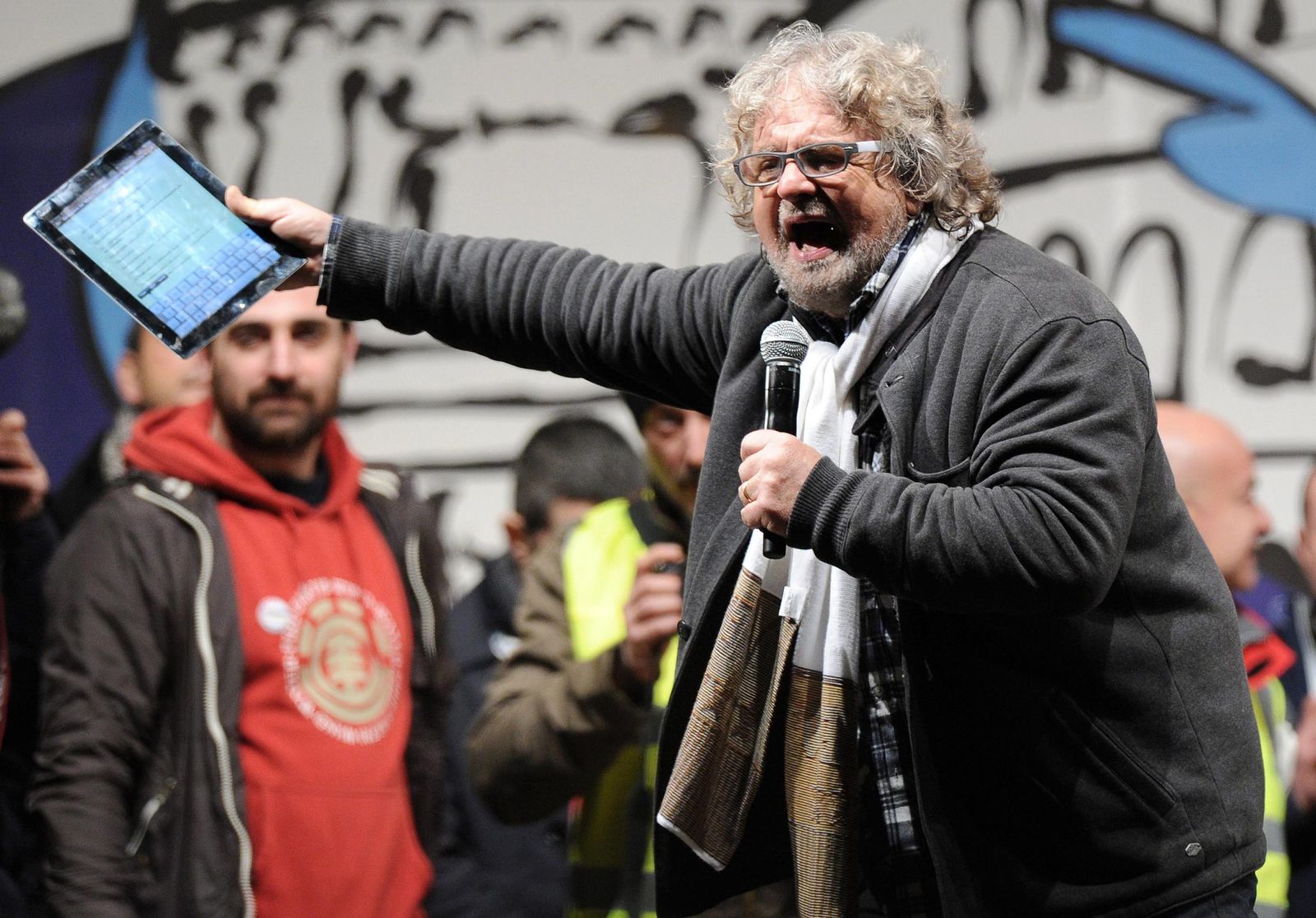 The biggest winner: Boisterous veteran comedian Beppe Grillo' anti-establishment party got more votes than any other.