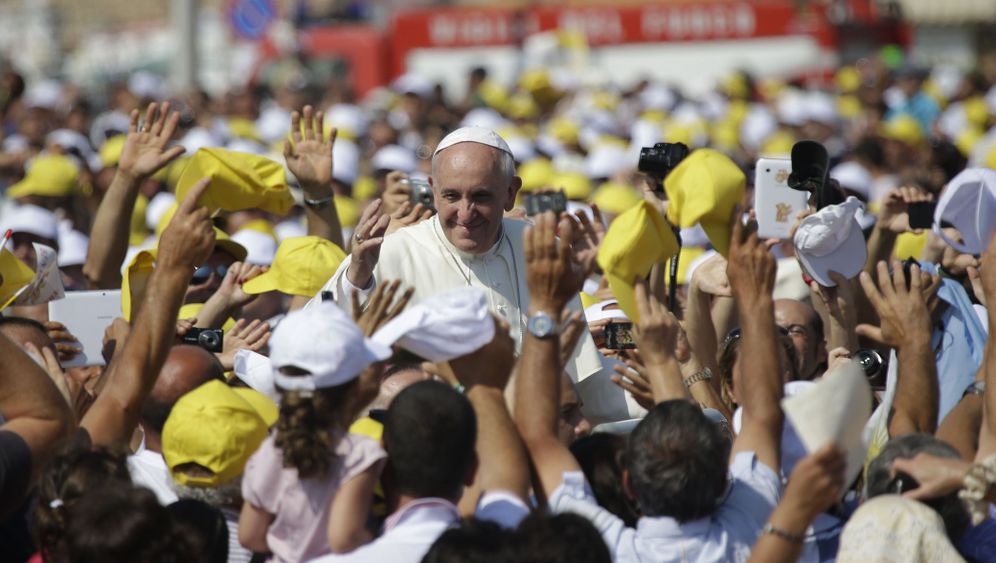 On the first pastoral visit of his papacy, Pope Francis traveled to the Sicilian island of Lampedusa on Monday to draw attention to the struggles of the African refugees who end up stranded there in their quest to reach Europe.

In keeping with his aim to lead the Catholic Church with modesty and a focus on evangelism and missionary work, Francis greeted recently arrived migrants with little fanfare, refusing to use the bullet-proof Popemobile usually brought on trips outside the Vatican.

The rocky, four-mile-long island between the northern African coast and Italy is the main port of European entry for refugees on boats making the treacherous crossing, often from Libya or Tunisia. Even as Francis arrived, a boat carrying 162 Eritreans was brought to shore. According to officials, the refugees were in good health, just cold after the journey.

But many migrants trying to reach the island aren't so lucky. Between 1994 and 2012, some 6,450 people have died crossing the Canal of Sicily, according to Fortress Europe, an Italian agency that registers migrant deaths. The United Nations refugee agency (UNHCR) believes some 500 died making the journey in 2012 alone, and some 40 have already died this year.

Behind an altar constructed of wood from shipwrecked migrant boats, Francis prayed for the dead and called on Europe to show compassion to the people trying to make a better life for themselves there. "The culture of our own well-being makes us insensitive to the cries of others," he said. "It brings us to feeling indifferent to others, to the globalization of indifference."

He also thanked the island's residents and volunteers who help care for the refugees on shore, and criticized smugglers who take advantage of their misery.

On Tuesday, German commentators praised the message sent by the pope's visit, agreeing that Europe must reform its approach to handling refugees.

"Francis has now shown that he does not intend to stop criticizing what he called the 'globalization of indifference.' On the contrary, he made symbolic marks in Lampedusa that no one can ignore unless they are completely jaded."

"First, he made a show of sincere mourning when he threw a wreath into the sea in memory of those who have drowned. Second, he warned of God's judgement upon the indifferent, and in a place where guilt for this is apparent, also prayed for it to be forgiven. Third, he made this place and the horror associated with it unavoidable through liturgical sacralization … Fourth, he called on European politicians to show determination in alleviating the suffering. But Francis avoided the presumption that he might know how to solve it all. He's not responsible for that. That job goes to the politicians and to all Europeans. They should be thankful that Christians won't stop criticizing them."

"Europe will still build new walls to deter these people … But the fact that Pope Francis' first trip was to a refugee camp outside the border of prosperity does change things. Jorge Mario Bergoglio is breaking through what he called the 'globalization of indifference,' which he said has caused the displacement of shock and forgetting of tears. He has directed the world's attention to those who exist on the fringes, and are thus at the center of humanity. Politicians and citizens, as seriously as they take their Christianity, will no longer be able to keep the plight of refugees irrelevant."

"Last Friday, Francis published a well-formulated encyclical over the 'light of faith.' On Monday, he showed how to put the theology into practice. Jesus once did something unprecedented: He touched the lepers who came to him, those who people took to be physically and morally unclean, and therefore disgusting. Pope Francis has embraced the lepers of today."

"Francis' demonstrative first trip to the island, which has become the epitome of refugees dying in the Mediterranean, has for the first time shifted the focus away from the European Union's policy of 'asylum crisis,' and on to those who, in an attempt to save their lives, or live lives that are just a little less miserable, are often killed in the process. But Pope Francis has drawn attention to this knowledge with a gesture that gets more attention than all the necessary protests from his charity or from NGOs."

"Still, Francis will need to work a miracle to get European capitals to see the issue from the perspective of those drowned and barely surviving refugees. Because phantom fears are being cultivated among Western citizens about how they can't be expected to take on the misery of the world, and of refugees' limited willingness to integrate ... But more realism in immigration policy would mean taking a closer look."