Banks in Cyprus will remain closed until Thursday to prevent a run on deposits in the wake of the bailout deal reached on Sunday night that imposes a major levy on big depositors, many of them Russian, and shuts down the second-largest bank, Cyprus Popular, also known as Laiki.

Cypriot Finance Minister Michalis Sarris told the BBC that the government was still hammering out details of capital controls on the size and amount of money people will be allowed to withdraw. He said the controls would "probably be a bit stricter" on the two largest banks, Bank of Cyprus and Laiki. He also said people with deposits of more than €100,000 ($129,000) could see about 40 percent of their deposits converted into bank shares.

Meanwhile, even though the banks have been closed since March 16, large amounts of money have been withdrawn from them, according to Reuters. The news agency quoted an EU source saying the Central Bank of Cyprus had requested more banknotes from the European Central Bank than were warranted in terms of the withdrawals it was reporting to the ECB.

The scale of the outflow isn't known. Money has been moved out in various ways. Transfers for trade in humanitarian products, medicines and jet fuel remain allowed, for example. In addition, Laiki and Bank of Cyprus have units in London which remained open throughout last week and they placed no limits on withdrawals, according to Reuters. Bank of Cyprus also owns 80 percent of Russia's Uniastrum Bank, which put no restrictions on withdrawals in Russia. 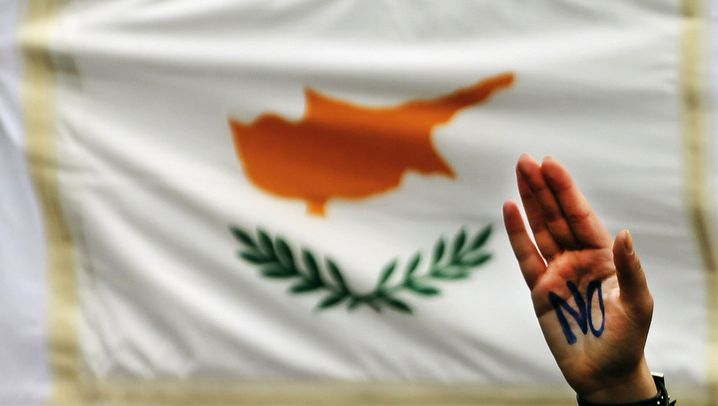 Within hours of the bailout being agreed on, the head of the Euro Group of euro zone finance ministers, Jeroen Dijsselbloem, fanned market uncertainty on Monday by saying it would serve as a model for dealing with future euro zone banking crises -- a departure from previous rescues in which taxpayers have had to foot the bill. The comment unsettled investors with assets in larger euro-zone nations and sent share prices and the euro tumbling. Later in the day, Dijsselbloem backtracked and said Cyprus was a special case.

The terms of the bailout have predictably angered Russia, and Germany is once again being vilified for taking a hard line. German media commentators say that while Cyprus brought its problems on itself, the rescue reveals an erosion of solidarity among euro-zone members after three years of crisis. The messy wrangling that preceded the bailout has done lasting damage to the EU, they add.

"The Cypriots may see themselves as victims, but their European partners aren't to blame for the mess. The case of Cyprus shows how rife alienation and anger are among Europeans: Many in the crisis-hit nations are blaming their plight not on their own corrupt elites or bad governance but on supposedly unsympathetic EU governments, meaning the supposedly neo-hegemonial Germans. The donor countries in turn feel they are the victims of blackmail who are rewarded for their help with insults. At the start of the fourth year of the debt and euro crisis, one can't help but register that trust and empathy have been eroded along the way. It doesn't inspire hope for the future of the EU."

"This drastic infringement of property rights was possible due to the unique constellation in Cyprus: Cyprus is the third-smallest country of the European Union, so its political weight isn't very relevant. Cyprus set up a dubious business model that attracted dubious people; they're now being punished, so the burden isn't necessarily hitting the wrong people. The expropriation satisfied the sense of justice of most Germans, and not just them."

"Thirdly, a remarkably poor set of Cypriot politicians refused to see reason for much too long, and in the last week displayed an unpleasant gambling mentality. Anyone who manages in just four days to alienate the entire euro zone, discredit the Euro Group chief, tries to involve Russia in a circumventing maneuver and welds together the German government and opposition in an election year has failed to understand a few basic rules on transparency and policymaking in Europe."

"In this unique combination, Cyprus will remain a unique case. But Europe has changed a lot as a result of this rescue drama. The readiness to show solidarity is eroding by the minute. The euro zone has long since stopped being a brotherhood for increasing prosperity and mutual stability. It has transformed itself into a school of gladiators in which everyone fights for his own advantage and his survival."

"The solution for Nicosia is no blueprint for dealing with other bank crises. Authorities wouldn't dare to repeat such a procedure in Italy or Spain. If a bank has obtained most of its money from other banks or financial institutions, a radical cut becomes far more complicated because the consequences would eat through the entire financial system. The collapse of Lehman Brothers made this dramatically clear."

"While the international impact of the Cypriot bank restructuring is likely to remain limited, the island nation itself will struggle. Not just rich foreigners but many Cypriot companies will lose a large part of their deposits -- which will inflict major damage on the country's economy."

"The Cypriot compromise is a big experiment. Its outcome will determine how Europe tackles future crises. And whether taxpayers will in future be able to avoid always having to foot the bill for troubled banks."

"The case of Cyprus will mean once again that billions of euros will be shifted around. Whenever there's a minor problem, investors in Portugal, Italy or Spain will hurriedly transfer their money to Germany or the Netherlands. They will all try to turn their Spanish or Italian euros into German or Dutch euros. The monetary union may still exist, but it is history nonetheless. Officially we may still have one euro, but in effect we've had 17 different euros for a long time now."

"The washing machine for illegal Russian money has been switched off! And the Kremlin is fuming. When Cyprus needed savings, Russia didn't lift a finger. Now it's throwing dirt at the rescuers. For Russia's billionaires, Cyprus was a euro colony where they could increase their wealth. It's only fair that they and not the small savers have to pay a high price for rescuing Cyprus."

"Anyone who describes that as theft -- as the Russian prime minister did -- can't be a man of the people. He's a servant of the billionaires. And people who compare the share that the Russians now have to pay with the evil robbery of Jewish assets lack character and know no shame."

"The European Union too has been damaged. People will remember the rudeness of the German finance minister, who was more focused on public sentiment in Germany than on the welfare of the community. And the politicians have made one thing clear to all investors and savers inside and outside the currency union: If you invest your money in the euro zone, you take on enormous political risks in addition to economic ones. This loss of confidence will have lasting impact, in the crisis-hit nations and far beyond Europe's borders." 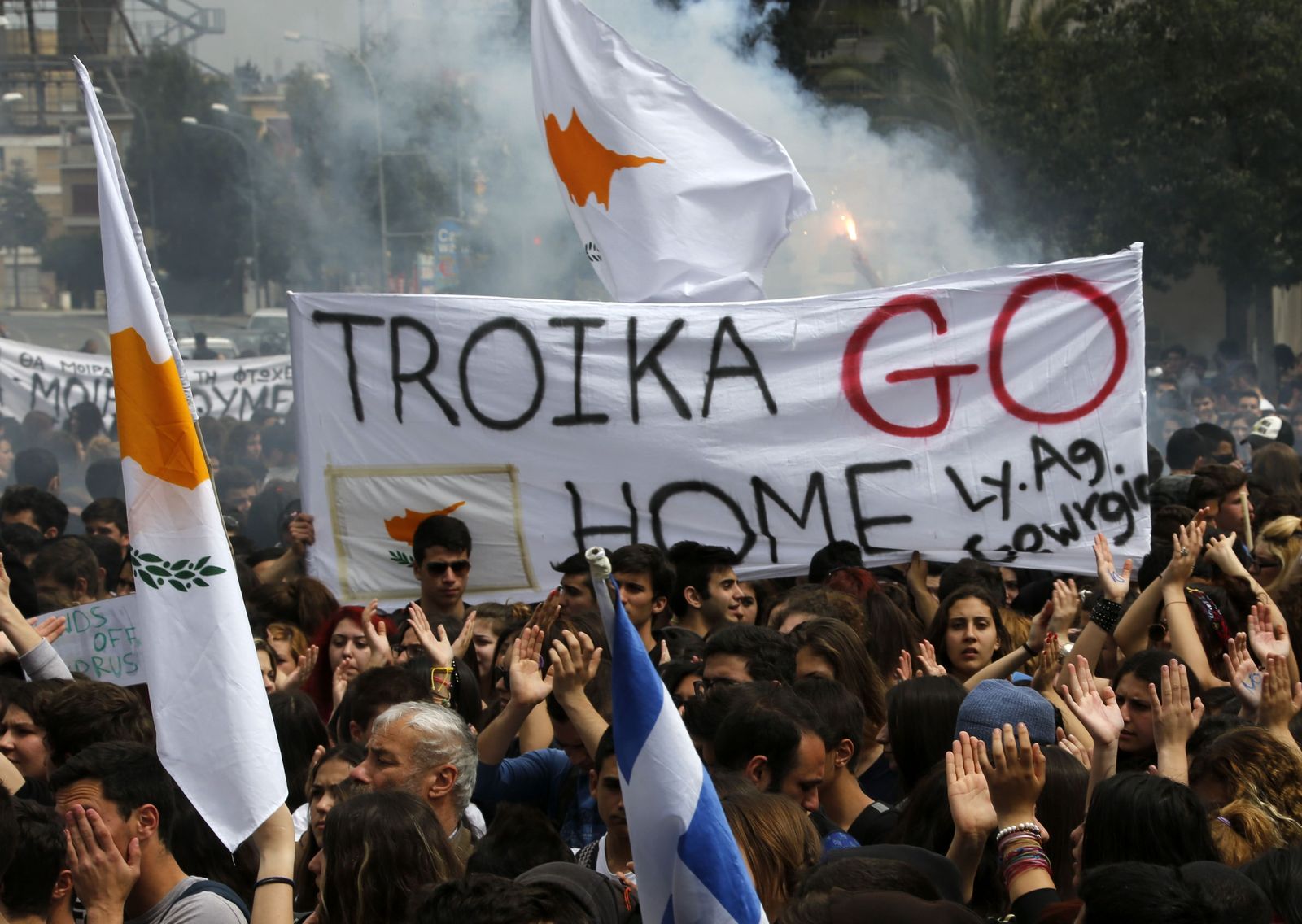 The original deal for Cyprus called for imposing a one-time levy on all savings accounts held in the country, including those with less than the guaranteed sum of 100,000. Not a single Cypriot parliamentarian voted in favor of the deal, which had been hammered out together with the country's president Anastasiades.