Presenting a prestigious German media prize in Potsdam, near Berlin, on Thursday evening, German Finance Minister Wolfgang Schäuble only had good words for the recipient. The man, who received the award for his efforts to save the euro, was the "ideal" winner, Schäuble said. A "great man" was being honored, he added.

The man in question was none other then European Central Bank (ECB) President Mario Draghi, who just hours before had made one of the most keenly awaited announcements of the euro crisis. Speaking in Frankfurt on Thursday afternoon, Draghi confirmed that the ECB is to launch a new bond-buying program to hold interest rates on euro-zone sovereign bonds in check. The program, called Outright Monetary Transactions (OMTs), allows for unlimited ECB purchases of sovereign bonds on the secondary market. The program is to focus on bonds with a maturity of one to three years.

Some of the elements of the new program appear to be designed to assuage German concerns. For example, the ECB will only assist countries that appeal for help to the euro bailout fund and submit to the required austerity conditions. Draghi also indicated that any bond purchases would be counteracted by measures to ensure that the money supply in the euro zone remains stable in order to avoid inflation, a top concern in Germany.

Turning On the Money Presses

The markets reacted to the announcement with euphoria. On Friday, the German DAX stock market index climbed to over 7,200 points, its highest level in 2012. Yields on Spanish and Italian sovereign bonds dropped, as well.

But the criticism of the ECB's course continued in Germany. Bundesbank President Weidmann reiterated his opposition to the move, saying it was too close to "state financing via the money presses." Alexander Dobrindt, general secretary of Bavaria's conservative Christian Social Union, said that the ECB must be "a stability bank and not an inflation bank".

Jörg Asmussen, a German member of the ECB's Executive Board, defended the decision, however. "We have no inflationary pressure," he said. "Everyone has to do their part to make the euro irreversible."

On Friday, German commentators expressed their considerable doubts about the plan.

"Rescuing the euro at any price could be an economic disaster -- that is the red line that must not be crossed. The other limit is the law: In a community based on law, the ends can never justify the means. A euro community that is based on constantly breaching treaties is built on a shaky foundation."

"On Thursday, the ECB unfortunately crossed both red lines. It did so reluctantly and not irrevocably, and yet it did so with determination. The purchase of government bonds by the central bank means that the ECB will tolerate and even reward economic mismanagement. (…) The crisis countries are not out of the woods yet. And that means that if the ECB provides them with unlimited help, then it is financing unsound states. It can only do so by printing ever more money. Ultimately, there will be the threat of bubbles, crises and inflation. It will benefit speculators, and the vast majority of citizens will have to foot the bill."

"The ECB can still turn back. This is precisely why the persistent protests by Bundesbank President Weidmann are important. In the end -- and this is something Mario Draghi also knows -- the euro cannot be saved if Germany, the most important economy in Europe, doesn't want to play along. The ECB and the other parties who are in favor of an unconditional rescue should not drive the German people to the barricades in the interests of Europe. But they are close to doing just that."

"Draghi has made it clear that, from now on, the ECB will only buy bonds when a crisis-hit country asks for help from the euro rescue fund or agrees to other conditions. But that promise isn't new. The would-be saviors of the euro have been insisting on structural reforms for years. The recipients of aid make promises but often do not keep them. But what will the ECB do if, say, Italy does not carry out the labor market reforms it has promised? Is it going to start selling Italian bonds? It can't if it takes its own argument seriously, that monetary policy in the euro zone no longer functions properly."

"The central bank is getting tangled up in its own arguments because it has allowed itself to become the prisoner of politics. Since it is willing to make up for the failures of European politicians, it can not quit the bond-purchasing program."

"The leaders of southern euro-zone countries should be happy: They can continue to borrow at low interest rates and do not need to worry about finding investors. But the northern leaders are satisfied, too, because they can hide behind the ECB and do not need to face uncomfortable questions in, say, the Bundestag (Germany's parliament) about all the additional risks that Germany is taking on. In the euro zone, there is no longer a distinction between monetary and fiscal policy."

"Every time the politicians shout 'fire,' the ECB puts it out. (…) Thursday's decision by the Governing Board to buy as many government bonds as necessary, no matter what the cost, is a sad culmination of this policy. It's the ultimate politicization of a young central bank, which, according to its statutes and the EU's treaties, should be one of the world's most independent."

"With his reference to a possible breakup of the euro zone, Draghi tried to justify the fact that he is trampling all over the ECB's statutes. In doing so, he is doing the dirty work for governments, who can slow down the pace of reforms a bit now that they are being protected by the central bank. At the same time, the ECB will get clogged up with government bonds from the crisis countries."

"The dangers of this policy are enormous. At the moment, it's not inflation that is the big problem. Rather, it is the redistribution of wealth from the north to the south in a completely non-transparent way and without political legitimacy. (The money is flowing) from the savers to those who benefit from this irresponsible monetary policy. This is undemocratic and antisocial."

"The fact that Draghi is conducting smart and rational central bank policies is demonstrated by his latest announcement of bond purchases. First, the Governing Council under his leadership -- with the exception, as was expected, of Jens Weidmann -- signaled that the central bank was not prepared to accept excessive interest rates on government bonds, no matter what the cost. At the same time, the central bank set the condition that the states in crisis would have to apply for assistance from the euro bailout fund, thereby having to subject themselves to reform requirements."

"But the financial markets and the indebted states can not actually be totally satisfied because Draghi is passing the buck for solving the crisis back to the politicians. Those politicians have to commit themselves to the rescue fund -- both in the countries in crisis and in the more stable countries. For example, the German Bundestag has to say whether it will approve a country's receiving aid from the rescue fund."

"Hence, it is not central bankers who will decide about the bond purchases -- meaning that they will no longer be the sole target for criticism. The members of national parliaments will also have to decide what they consider to be the greater evil: accepting a country into the bailout program, or risking the disintegration of the currency union."

"The crisis has given the ECB Governing Council such an increase in power that no national government and no other European institution can hold a candle to them anymore. The Governing Council can at any time, with a majority vote, decide the fate of at least half a dozen governments, supporting them or bringing them down -- and that number is increasing."

"The opposite position -- often repeated by many in the banking industry, who have good reason to defend their ECB -- is that the ECB was forced to act because the governments were not doing their jobs. They are actually the ones responsible for saving the countries in crisis and the monetary union, but they are not doing so. Instead, they are relying on the ECB. There is something to that argument."

"But it is national constitutions, parliaments and citizens who are standing in the way of politicians. The simple and illegitimate solution is to outsource projects that are not feasible politically to institutions that are only subject to weak, if any, democratic control. And the alternative? That would be to respect constitutions and the will of the population."

"The fuss in the German media and political circles over the decision was predictable, but that doesn't change the fact that Draghi's decision was the only correct one that can ensure the euro zone's survival."

"The ECB Governing Board, which doesn't exactly have a reputation for a nonchalant monetary policy, has decided on this step by a large majority. The head of Germany's Bundesbank, Jens Weidmann, may have voted against it -- but he has also now totally isolated himself."

"Weidmann has been exposed as an ideological hardliner who, without delay, would prefer to allow an economic catastrophe rather than soften his views, which are far removed from reality. He was maneuvered into the position as head of the Bundesbank as a minion of (German Chancellor Angela) Merkel. But he has failed to offer plausible alternatives for pulling out of the crisis even in major appearances in the run-up to the decision, such as his recent interview with SPIEGEL. As the intellectual successor to his predecessor Otmas Issing, Weidmann, together with his neo-liberal ideas, is one of the most dangerous men in Europe."

"In the annals of the United States of Europe, Sept. 6, 2012 may go down together with ECB President Draghi as an important day. United States of Europe, you might be asking? Of course we still have a long way to go to reach that goal, but without Draghi's courage and farsightedness, the euro's days would be numbered and probably those of a united Europe, as well."

"With his new, unlimited bond-buying, Draghi isn't transforming national debts into European ones -- at least not directly. But he is acting on the view of the majority of experts that, in an acute crisis (like the current one), only the ECB can rescue the common currency. Why? Because we don't have a European Finance Ministry yet, and the euro bailout funds so far haven't been big enough to impress investors. Meanwhile, the national governments in the donor states are growing wary of having to explain to voters why they must provide ever-greater guarantees. Likewise, the ECB has the enormous advantage that it can print the money it needs for the unlimited purchases on its own. It can defend against all speculative attacks and win because no investor has unlimited money."

"In rescuing the euro, politics has the first say -- it democratic legitimation is higher than that of the ECB. Second, this (decision) creates the nucleus of a common euro economic government. Third, the ECB has made exceedingly clear who is responsible for doing their homework -- namely, the national governments."

"In order to enter into the history books, you need the right point in time, the right strategy and the right answer to the crisis. It looks as though Mario Draghi may have achieved that feat." 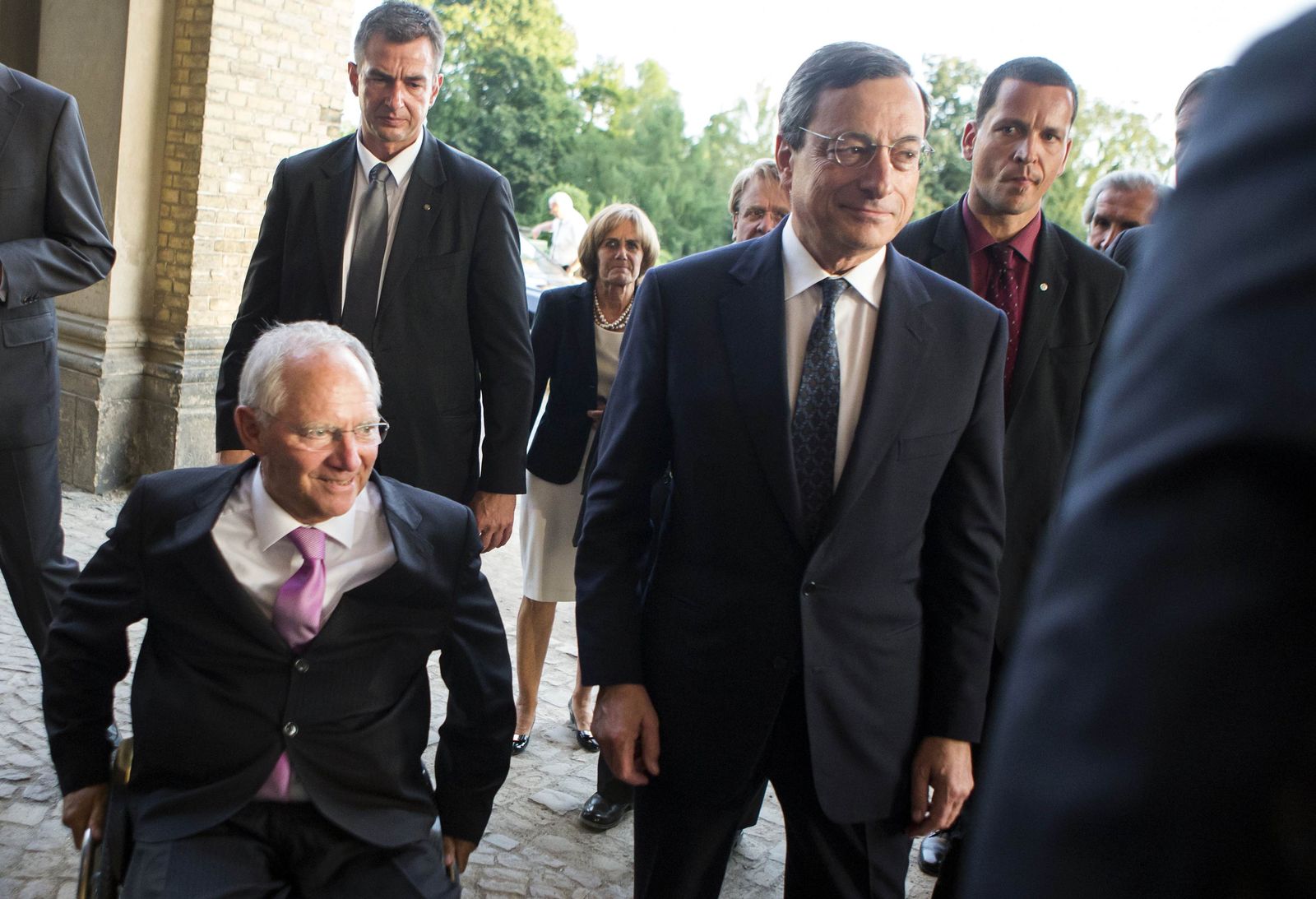 Thursday was a busy day for Mario Draghi (second from right), seen here as he arrives for the M100 Media Prize award ceremony in Potsdam with German Finance Minister Wolfgang Schäuble (left).