Greece appears to be sinking ever further into a political quagmire after a first push to form a new coalition government failed on Monday, just one day after outraged voters chastened the parties that have supported the country's bailout and austerity measures.

Sunday's election results revealed clear anti-austerity sentiments from voters, who toppled the two main parties that have dominated Greek politics for some four decades, the conservative New Democracy and socialist PASOK. Instead, many Greeks voted for smaller, more extreme, parties that oppose the strict requirements levied by the European Union and International Monetary Fund in exchange for bailouts.

Observers believe there is little chance of any of the parties being able to put together a viable coalition government, meaning that new elections may become necessary.

After New Democracy, which came in first with just 18.8 percent of the vote, failed in its attempt to form a coalition on Monday, the baton was handed to the second-placed Radical Left Coalition on Tuesday. The left-wing, anti-austerity party will have three days to come up with a power-sharing deal.

The risk that they, too, might fail, along with the new popularity of the unconventional parties, has sparked alarm on financial markets and among the country's creditors, who have urged Athens to maintain agreements made in exchange for aid.

"Of course the most important thing is that the programs we agreed with Greece are continued," German Chancellor Angela Merkel said on Monday.

According to European Commission spokesman Amadeu Altafaj Tardio, solidarity with Greece is a "two-way street," and the country must strive for "full and timely implementation" of its agreement with creditors.

Meanwhile Greece's financial situation continues to deteriorate. In its fifth year of recession, with unemployment over 20 percent, the country has agreed to implement tough new austerity measures in June. It is also scheduled to receive its next tranche of aid in May, which the IMF is already threatening not to pay. But without that money, Greece may have to default on its debts and possibly leave the euro zone.

"The continuation of the austerity and reform programs is at risk. Most of the radical and extreme parties that will enter the new parliament reject what the voters have been told is the 'austerity diktat' from the EU, IMF and Germany. What will happen if the new government actually demands new conditions or just plain rejects further economizing? The European Commission can insist that they maintain the course that has already been set."

"But if Athens decides to veer from the agreed upon course, then trouble lies ahead. The debt and euro crisis would boil over once again, bringing with it the dangers of contagion that kept markets and politicians holding their breath in the past. And there would be renewed pressure on Berlin to be charitable. Hopefully Athens can find a practical coalition that understands its responsibility to Greece and its partners. Or there will be new elections sooner or later, and everything will remain uncertain."

"The election results are also a defeat for Germany. The Greeks and the French have rejected what they see as a German austerity and reform diktat. That is certainly unfair, given the massive obligations and risks that Germany took on to save the EU's problem countries from bankruptcy. And Germany's capability is being greatly overestimated by those who say Berlin should shell out even more money for things such as growth programs. But in the end, the results are also proof that Europe doesn't work. Every country still only debates within its own national borders, because there is no European public sphere. Germany's joint liability for the precarious finances of the countries in crisis remains a one-way street because the Germans can't manage to adequately assert their positions, interests or the significant efforts they've made."

"And in the end the parties that win in Greece are the radical ones that want to keep the euro, but don't want to fulfill the obligations agreed upon in return for the financial aid -- an untenable position. … The German chancellor must master a difficult balancing act in the coming weeks. The Greeks will require hard resolve, while the French will require flexible diplomacy. Whoever ends up governing Athens, it must be made unmistakably clear to the new leaders that they're welcome to venture out on their own, but if they want to take advantage of the financial help from the donor countries and remain within the euro zone, then they must adhere to the stipulations already laid out. The German citizens are certainly not prepared to finance Greece's vacation from reality."

"Can the Greeks simply vote out austerity? Can a new government in Athens simply abandon the reform and debt reduction targets it agreed with the EU? On Monday, Chancellor Angela Merkel emphasized that the fiscal pact was a done deal and could not be renegotiated. But what if nobody in Athens wants to stick to it? Greece can't be kicked out of the euro zone -- the EU treaties don't allow for that. The crisis-ridden country can only abolish the euro by itself. It's unlikely that the Greeks would do this, given the vast drachma-denominated sums that they would then have to pay to service their debt. Hence a new round of negotiations is likely to begin, once the political chaos has passed and a new government has been formed -- negotiations over the conditions for further Greek aid."

"But the election had one unreservedly positive outcome: The Greeks have been freed from the stranglehold of the three ruling political dynasties with their two parties, the conservative New Democracy and the center-left PASOK, which used to hold quasi-monopolies. The first step toward a new political era in Athens has been taken. But this long journey needs to first lead through the chaos of many small parties, which put the country at risk of ungovernability."

"What good does it do to complain that extremist parties were strengthened at the expense of moderates in the Greek election? Or that the Greek people decided on a protest vote rather than on an endorsement of the current system of political reform? Or indeed that the establishment of a government in Athens and consequently the attempt to save the euro has now become more difficult than ever?"

"The result was as predictable as it is frightening. And yet the EU, and especially its former ruling duo, Merkozy, did nothing to prevent it. Instead of offering the ruling coalition political support, it dictated austerity measures that would cripple both the Greek economy and government. After all, opposition to the EU grew alongside extremist parties. Merkel had trusted that things would work out. But unsurprisingly, they didn't."

"If the most important goal is to strengthen the euro and overcome the crisis and investors are to be persuaded that they can put their trust in Europe, and if politicians are to show that they can learn from their own mistakes, then the harsh austerity measures imposed on Greece must be re-examined. Germany must set forth a new strategy to promote growth in the crisis-hit countries rather than stalling it further."

"If this happens quickly, then one of the smaller parties could enter a coalition with New Democracy and PASOK. Then Greece and Europe would gain another chance at forming a government dedicated to political reform. This might not necessarily work, but it is Europe's last chance."

"Many protest voters cast ballots not against austerity in and of itself. They very clearly voted against a recipe for austerity that was imposed on them (by the EU and the IMF). They are opposed to a savings policy that will impoverish large parts of the population and, in their eyes, leave the people truly guilty of the mess Greece is in -- the massive tax evaders, the corrupt and powerful -- unscathed. They are against austerity measures that also put large burdens on pensioners and normal workers as a way to enable politicians to shirk painful structural reforms like the radical elimination of bureaucracy. They are opposed to a cost-cutting policy that threatens to eliminate the middle class and isn't even a worthwhile sacrifice, given that it is choking the economy."

"Is it really too much to demand of politicians that they be fair and sensible, even in times of crisis? The EU and the IMF also share responsibility for the fact that their Greece strategy has failed so spectacularly. For as long as things looked right on paper, they allowed the government in Athens to get away with not tackling necessary reforms and torturing its people with ever new taxes instead. They insisted on a recipe for austerity that sent the economy into a death spiral. And they created the impression that Europe's banks are more important to them than the people of Greece. And that's how they lost the people. One cannot rule out that the Greek people might agree to further austerity measures."

"What one can predict, though, is that, no matter which government rises from the ashes in Athens, without renegotiations and without stronger incentives for growth for the Greek economy, Berlin and Brussels will not be able to keep the euro rescue packages (for Greece) in place."

"The election's real victor is named Alexis Tsipras, head of the Radical Left Coalition and future leader of the opposition or even a member of the governing coalition. In contrast to the name, the party is relatively moderate and much more open than, for example, the orthodox communists of KKE. The Radical Left Coalition may even be prepared to join a temporary coalition with the conservatives."

"But before the leftist alliance acquiesces to such a marriage of convenience, it should first … explore the possibilities of creating a coalition with all leftist political groups. At the moment, such an alliance looks unlikely, primarily because some of the parties on the left are unable to see the forest for the trees and are involved in bickering and personnel debates."

"But what could one expect from such a government? Under the Radical Left's leadership, such a coalition would first and foremost chart a course of confrontation with Greece's international donors…. Such a shift now appears to be possible. It is up to the leftist parties not to let the opportunity slip through their fingers." 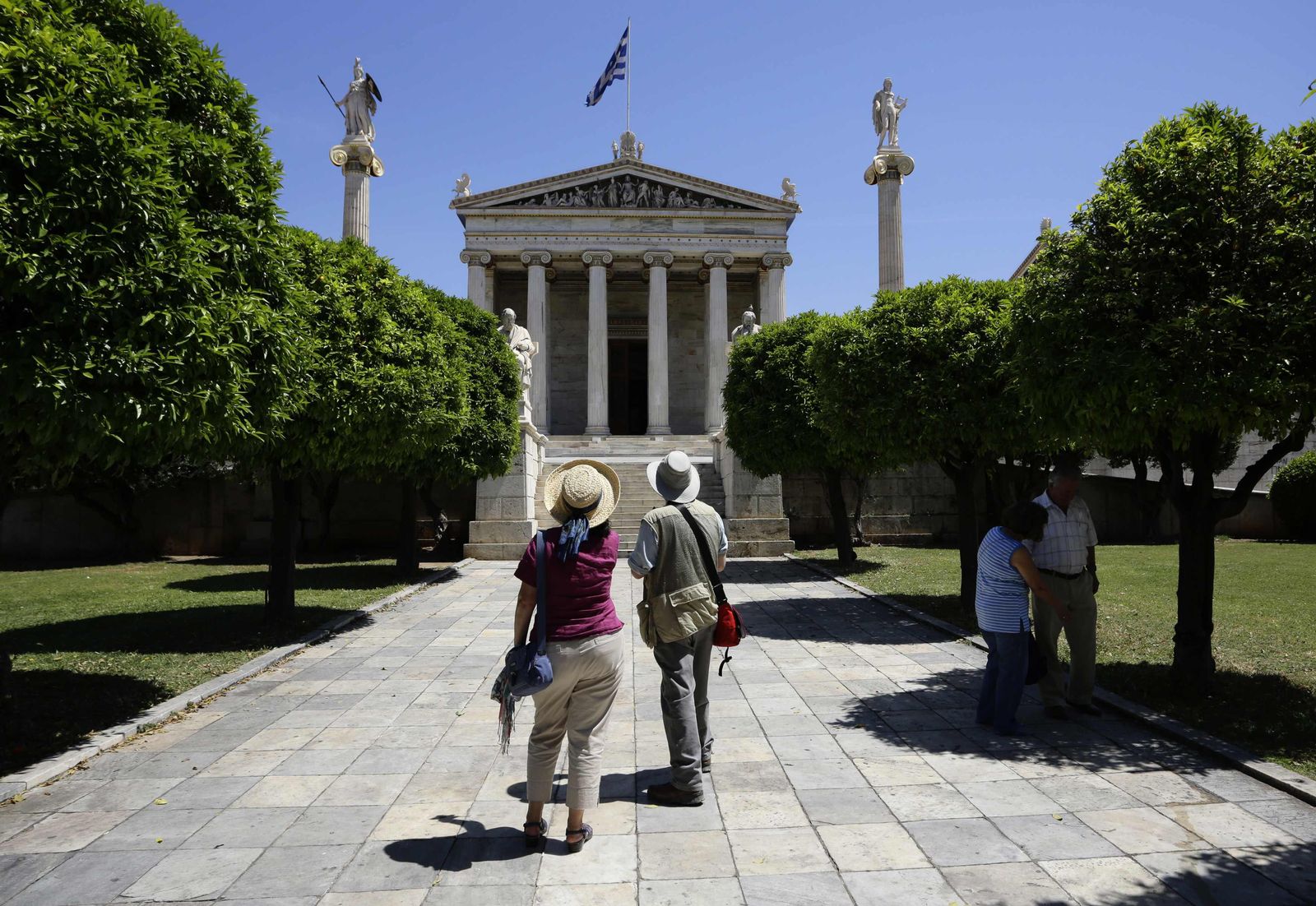 Tourists at the Athens Academy on May 7, the day after Greece's election.