German Chancellor Angela Merkel and her finance minister, Wolfgang Schäuble, have been accused of crossing many of the "red lines" that they have set for themselves over the course of the euro crisis, making U-turn after U-turn as the crisis escalated. They officially stepped over the latest red line on Friday, when European Union finance ministers meeting in Copenhagen agreed to boost the scope of the euro zone's firewall to over €800 billion ($1 trillion). Berlin had long rejected such an expansion out of hand.

Austrian Finance Minister Maria Fekter announced on Friday that the permanent euro rescue fund, the European Stability Mechanism (ESM), would be expanded, by considering the around €200 billion in current bailouts as being separate from the €500 billion earmarked for the ESM -- originally, the €500 billion figure was to have included the €200 billion in existing aid. The ESM, which is due to come into operation in mid-2012, will also be boosted by including around €100 billion in bilateral aid that was given to Greece in 2010, as well as aid from other EU funds, bringing the firewall's total capacity to over €800 billion.

Fekter expressed her confidence that Friday's move would be enough to calm the financial markets. "The markets are already signaling relative calm," she said. "That shows that the markets can work with what we have set up here."

On Thursday evening, in the run-up to Friday's summit, German Finance Minister Wolfgang Schäuble had said he was prepared to combine the existing bailouts with the new permanent mechanism. He said that the €800 billion capacity was "convincing" and "sufficient."

But not everyone shares his view that the sum is enough. On Thursday, French Finance Minister François Baroin called for the permanent euro bailout fund to be increased to €1 trillion, to shore up market confidence and prevent contagion in the euro crisis. "The firewall, it's a little like the nuclear option in military planning, it's there for dissuasion, not to be used," Baroin said in a radio interview. He was echoing calls made by the Organization for Economic Cooperation and Development (OECD) earlier in the week to boost the firewall to €1 trillion.

At the beginning of the week, SPIEGEL reported that Merkel and Schäuble had dropped their long-held resistance to allowing both the temporary European Financial Stability Facility (EFSF) and the ESM, which was supposed to replace it, to operate in parallel for a period, thereby expanding the scope of the funds available. Berlin had come under massive international pressure to increase the size of the firewall so that it was large enough to potentially bail out countries such as Spain and Italy.

Opposition parties in Germany were quick to make political capital out of the Merkel administration's many U-turns during a debate on the euro rescue fund and the European fiscal pact in the German parliament, the Bundestag, on Thursday. "Your red lines have, in reality, become shifting sand dunes," Frank-Walter Steinmeier, floor leader for the center-left Social Democratic Party (SPD), said to widespread applause.

During the Bundestag debate, the opposition also reiterated their position on linking their support for the European fiscal pact with stricter regulation of the financial markets and measures to encourage growth. "We need a tax on financial transactions," said Green Party floor leader Jürgen Tritten.

The fiscal pact, which will introduce tougher rules for budget offenders, is Merkel's pet project and was agreed upon by 25 EU member states at a summit in January. But the German government is reliant on opposition support to get the pact through the Bundestag -- because it affects the parliament's competency on budget matters, it needs to be approved by a two-thirds majority. A vote on the pact is expected in May.

However, it seems unlikely that the opposition will get their desired financial transaction tax. Plans for a Europe-wide tax, or even one within the euro zone, appear to be dead in the water for the moment, given stiff opposition from Britain and even some euro-zone countries. The SPD is also reported to be divided internally on the issue, with some party members arguing that opposing the fiscal pact -- which many in the SPD regard as a sensible idea -- can only damage their credibility. On Thursday, Steinmeier appeared to signal flexibility on the financial transaction tax, saying in the Bundestag that if a pan-European tax were to fail, there were other ways to implement the same goals.

On Friday, German commentators take a look at the German debate on the euro crisis.

"It is to be doubted whether all members of the Bundestag actually understand the financial dimension and the technical details of the ESM. It doesn't help matters that the federal government has repeatedly shifted its position on this issue -- as the SPD's floor leader Frank-Walter Steinmeier rightly pointed out."

"But the entire euro rescue is a balancing act. On the one hand, fiscal discipline needs to be promoted. The pressure on the crisis-stricken euro-zone members to carry out reforms must not be undermined by the knowledge that, if they fail, they will be caught by a financial safety net. On the other hand, there is the need for solidarity. Those countries that are in a better position can 'help the others to help themselves,' as Schäuble put it."

"As always in the EU, these things lead to compromises in practice, which also explains why the government has readjusted its position on the ESM. The high ratings that Merkel enjoys in the polls may be related to the fact that the Germans seem to intuitively understand this delicate maneuver."

"In the debate over the euro rescue, the SPD and Greens are increasing succumbing to the temptation to make political capital out of the government's mistakes. During the parliamentary debate on Thursday, the parties' respective floor leaders, Frank-Walter Steinmeier and Jürgen Trittin, gleefully listed the many red lines that Chancellor Angela Merkel has drawn, only to cross them a short time later."

"They have a point. In December, Merkel argued, entirely convincingly, that boosting the euro bailout fund was the wrong course to take. After all, she said, it would reduce the pressure on crisis-stricken states to push through reforms. There was also the question of whether the creditor countries, including Germany, were in danger of being overwhelmed by ever-higher guarantees."

"Now, the fund is indeed being expanded, and the coalition government's former concerns have suddenly disappeared. Instead, the administration is attempting to conceal its own U-turn with highly flawed arguments. Volker Kauder, leader of the conservatives' parliamentary group, argued in all seriousness that the move would decrease the risk to taxpayers because a higher firewall would actually calm the situation. This is, at best, naïve. More probably, it was a deliberate attempt to deceive people."

"If we ignore the ritualized rhetoric, the pretense of indignation and the petty jibes, then two things are clear following the Bundestag debate on the future of the currency union: The fiscal pact will happen -- and the financial transaction tax won't. Even if the SPD is insisting that, for them, tougher budget rules in the EU member states and a participation by the banks in the costs of the debt crisis are linked together, it is already clear that the SPD will not veto the fiscal pact in the parliamentary vote in May because of the transaction tax. That's a good thing."

"Of course it would be sensible to use a transaction tax to put limits on purely speculative financial deals, generating billions in revenue as a side effect. But as long as peripheral groups -- such as the British Conservatives, Luxembourg's banking lobby and Germany's FDP -- resist introducing the tax on the EU or euro-zone level, it is pointless to try to fight them. It would be smarter to try to achieve the same goals through other means."

The left-leaning Die Tageszeitung focuses on the calls to boost the ESM to €1 trillion:

"A trillion! That's how much money France is now demanding for the euro rescue fund. Until now, Chancellor Angela Merkel only wanted to come up with €700 billion. On the surface, it looks as if a Franco-German showdown is on the horizon. In fact, it is nothing more than a PR battle, where nothing is really new. It was already clear last summer that the existing EU rescue fund, the EFSF, was much too small to save Italy or Spain in an emergency. Even then, people were talking about €1 trillion as a target."

"One trillion euros is a lot of money, and yet even this huge sum will not be enough. But again, that's nothing new. For months, calculations have been doing the rounds that show that at least €1.5 trillion will be needed. The only interesting question left is how long it will take France and Germany to acknowledge this reality." 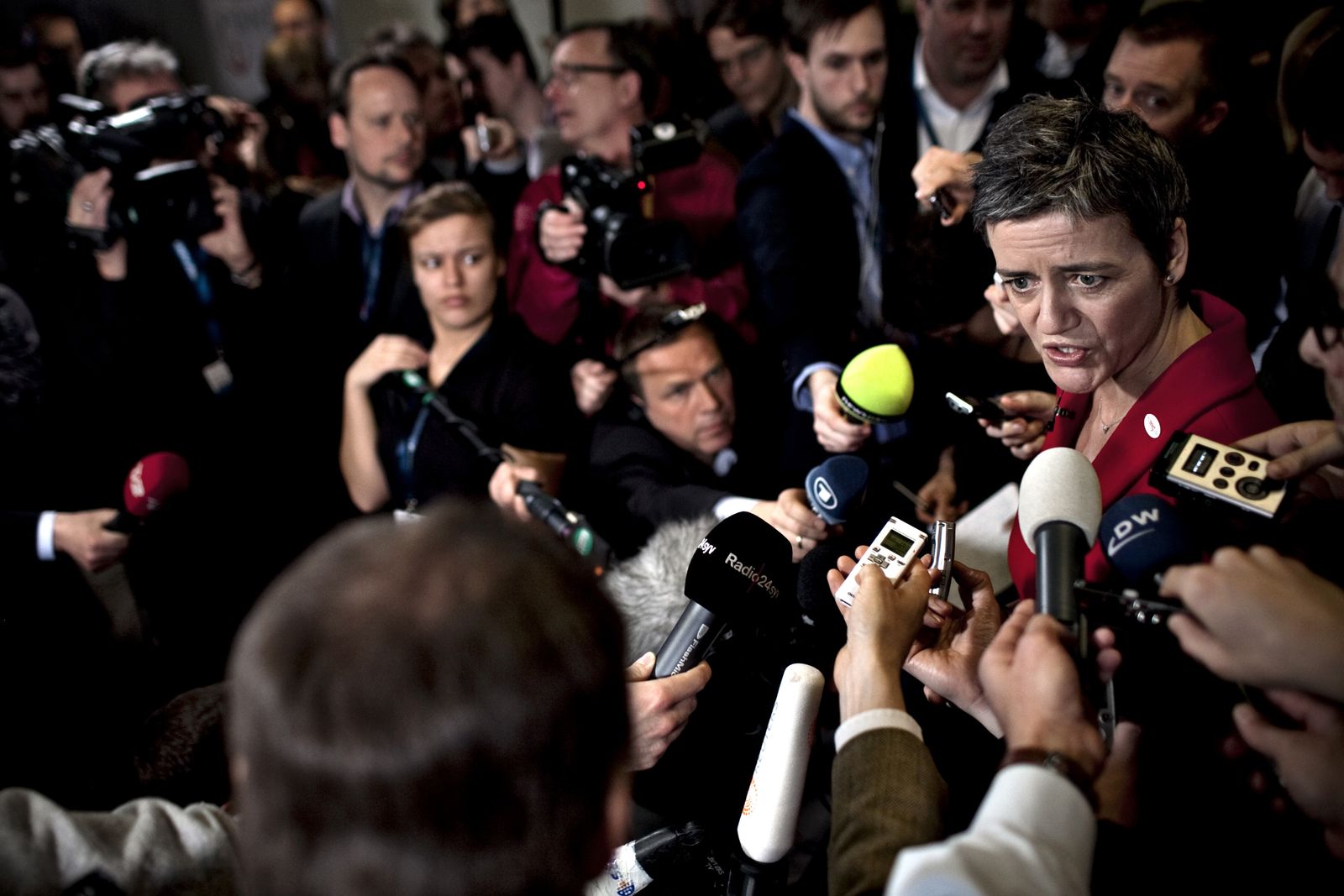 Danish Finance Minister Margrethe Vestager gets a grilling by reporters at an EU finance ministers' meeting in Copenhagen on Friday.