The European Union has been wrangling over a potential financial transaction tax for more than two years, and there appears to be no end in sight. After attempted negotiations between EU finance ministers ended in disagreement on Tuesday, efforts have stalled indefinitely.

Last autumn, the European Commission filed a draft directive proposing a financial transaction tax that would extend to most financial operations and come into force in 2014. With an aim toward discouraging risky financial transactions, it would apply to trading in stocks, bonds, derivatives and other financial contracts, and could raise up to €57 billion ($75 billion) each year, according to the Commission.

But tax laws in the EU can only be implemented with unanimous support from all 27 European Union members, and Great Britain and Sweden won't get on board unless it's introduced globally. Ahead of the meeting with his counterparts on Tuesday -- the first to have the issue on its agenda -- German Finance Minister Wolfgang Schäuble already seemed prepared for failure. "Alternatives or compromises" may also require consideration, he said.

Schäuble had recently suggested an alternate plan by Berlin and Paris to implement the tax within the euro zone alone. But that idea is opposed by the Netherlands, Luxembourg and Ireland. If such a tax were to come into play, then all 27 EU members must agree, at the risk of an exodus by the financial industry, Luxembourg Finance Minister Luc Frieden said at the Brussels meeting.

Meanwhile the German government is under pressure by the opposition to push for a financial transaction tax. Both the center-left Social Democrats (SPD) and the environmentalist Greens have made it a condition for their vote on the European fiscal pact in the German parliament, the Bundestag. Without their support, Chancellor Angela Merkel's coalition won't be able to get the pact, which is meant to help solve the European debt crisis through stricter budgetary discipline, through parliament.

Late on Tuesday, Merkel sought to dampen hopes for a swift agreement on the tax. Details still need to be discussed, she said after a meeting in Rome with Italian Prime Minister Mario Monti, who is also Italian finance minister and took part in the Brussels meeting. At the end of the month, the finance ministers would meet informally once again to discuss possibilities, she said, renewing her call for EU-wide regulation.

"Naturally the EU would be best advised to do this together," she said. Implementing a financial transaction tax for only part of the EU could distort competition, she said. Monti backed Merkel's call for the proposed tax to apply to all 27 EU members.

German commentators on Wednesday consider the long road ahead for a financial transaction tax in the EU.

"The topic will be deferred for now. A consensus is not in sight. … And so begin the deliberations over 'alternatives,' which the German finance minister has now called for. Even when he doesn't want to admit it, Schäuble's position is anything but comfortable. He needs votes from the opposition for the fiscal pact, and the Social Democrats insist on the introduction of a financial transaction tax, which won't happen in the EU. The junior coalition partner, the (pro-business) Free Democrats, will only agree to a Europe-wide solution, and avoid involving themselves in a nuanced process. (No one is talking about a global tax any longer; this much realism exists at least.) This is what one calls a predicament."

"The German position is not as strong as it could be, because the chancellor discovered her love for this financial transaction tax a bit late. And even when the ranks can be closed within the coalition, it would do nothing against the veto threats from Great Britain and other countries -- because of the requirement of unanimity -- regardless of what's to be made of London's stance. Once again, energy really needs to be invested in the search for a regulation which has a chance of approval. It sounds banal, but isn't that simple."

"Berlin, Paris and Brussels are determined that if necessary, the tax, which is so popular with the people, should be imposed only within the euro zone. The few critics will yield sooner or later. The European Commission estimates it will bring in some €50 billion. But the belief that the transaction tax would mainly affect banks and speculators is naïve. Just like every sales tax, this charge will also be passed on to consumers."

"Above all, the politicians must be aware that their tax plans will cause major disquiet on the financial markets. The relative quiet of late has come at a dear price. In finding a solution for the current -- politically caused -- debt crisis, banks play a central role. Anyone who uses them as a scapegoat for our times out of populist motives is intentionally leading citizens astray. Instead of always searching for new sources of tax revenue, politicians would do better to save more rigorously -- in both debt-laden and prosperous countries alike."

"Amid the uproar, the question of just what a transaction tax would actually achieve in practice is getting short shrift. Certainly the tax wouldn't end speculation on financial markets or solve government budgetary problems. It also wouldn't be a penalty for banks, being passed on in part instead to citizens and businesses. And yes, some institutions would move certain business activities to other parts of the world."

"All of these arguments are compelling -- but they still shouldn't stop Europe from implementing the tax after 40 years of debate, in the worst case only in the euro zone, or even just a 'coalition of the willing.' It would be a step with powerful symbolism, a signal that politicians won't just stand by and watch as trust in the social market economy and democracy erode. Some try to dismiss this, because naturally symbols can't replace reforms. But that doesn't make them superfluous. On the contrary, without symbols, policy degenerates into mere administration."

"The financial transaction tax is neither a wonder weapon nor a cure-all. It's a chance for regulation whose time has come. Politicians must use this chance -- instead of destroying it through tactical deals or silly palaver."

"Chancellor Angela Merkel has come away from the financial transaction tax struggle with a bloody nose. First the European Commission took her side. France was in on it anyhow, and now so are Italy and Spain. But Estonia, Cyprus and Malta, plus a few others, are resisting. They're hindering the big euro countries from taking the appropriate measures in reaction to the financial crisis by introducing an anti-speculation tax."

"It sounds absurd, and it is. The astonishing thing is not a few die-hards still remain, it's that the financial tax has so much support today. A short while ago it was a crazy idea from outsiders like the activist network Attac, the Association for the Taxation of Financial Transactions and for Citizens' Action. Now the four biggest EU nations and the European Commission president are for it. The naysayers have neither the power nor the arguments to seriously block it. … The financial transaction tax is overdue and will happen sooner or later." 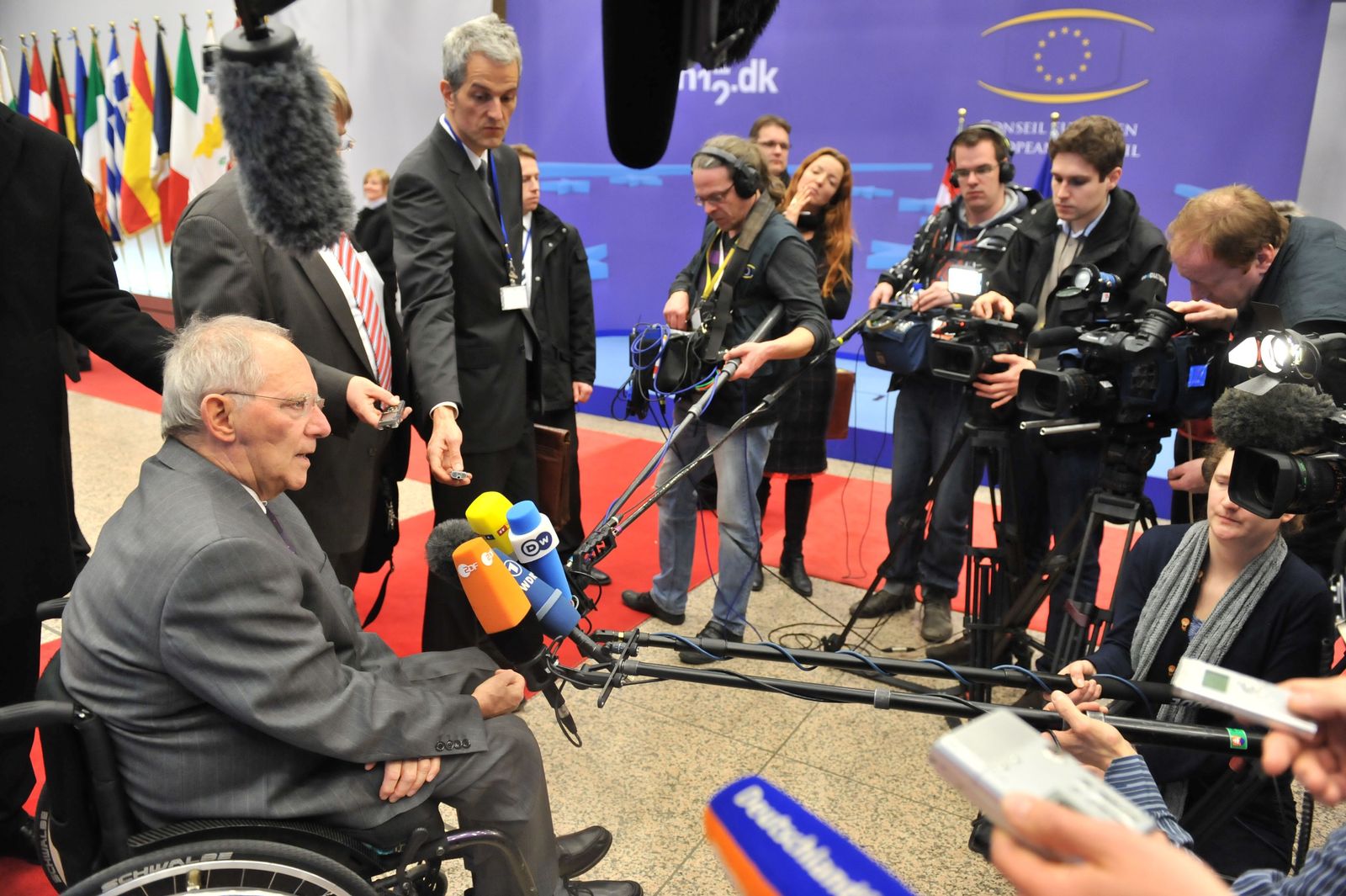 German Finance Minister Schäuble with journalists at the euro-zone meeting on Tuesday.