The results of Sunday's first round of the French presidential election had barely been announced when attention already began shifting to the runoff on May 6. Current President Nicolas Sarkozy's chances of victory seem slimmer than ever, especially after the psychological blow of becoming the first incumbent president to lose in the first round since the start of the Fifth Republic in 1958.

But Sarkozy isn't throwing in the towel yet, and the campaign over the next two weeks is expected to be a tough one. Observers were quick to point out that both Socialist Party candidate François Hollande, who won the first round with 28.6 percent of the vote, and Sarkozy, who received 27.2 percent, will make efforts to woo supporters of the right-wing populist Marine Le Pen. She shocked France by getting almost 18 percent of the vote, the best-ever result for her National Front.

European politicians, including German Chancellor Angela Merkel and European Commission President José Manuel Barroso, also reacted to the National Front's good showing with concern. A spokesman for Merkel described the National Front's result as "alarming" but said that it would be "more or less cancelled out" in the second round. Barroso warned that the crisis in Europe had provided "political ground for populism to develop." 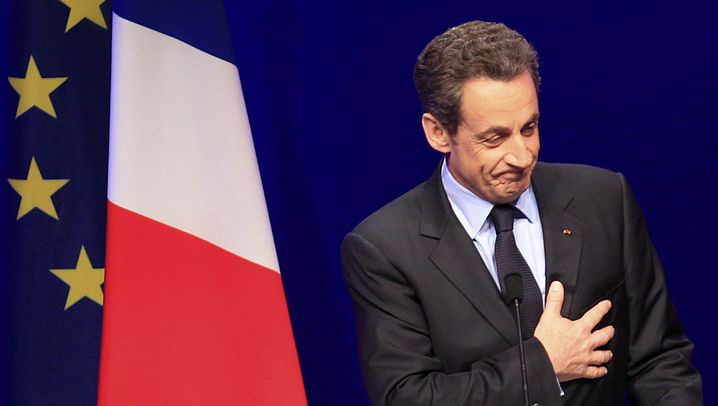 Sarkozy in particular is expected to try hard to win over Le Pen's supporters. "I've heard you. I'll draw all the consequences," he said on Monday, addressing Le Pen's around 6.5 million voters. Observers expect Sarkozy's campaign in the remaining two weeks to shift even further to the right. Already ahead of the first round, the incumbent had made clear overtures to the far-right camp with rhetoric against immigrants and Muslims.

Le Pen, for her part, is not expected to endorse either candidate in the runoff. She may even be hoping for a Hollande victory, which could cause Sarkozy's conservative Union for a Popular Movement (UMP) -- which has only been held together by the desire to show unity during the election campaign -- to split into separate factions.

Hollande, meanwhile, has already been endorsed by Jean-Luc Mélenchon of the Left Front, who won 11.1 percent of the votes in the first round. But even if he wins the runoff, Hollande will face a hard task as president, given the disillusionment with mainstream politics which has become widespread among the French during Sarkozy's presidency.

The government in Berlin was quick to stress that German-French ties would continue to be good, no matter which candidate won. Merkel's spokesman said that the chancellor still supported Sarkozy in the election, but that she would "work very well together" with whoever won. German Foreign Minister Guido Westerwelle said that the French electorate's choice would naturally be respected. "But it is good that the runoff is taking place between two democratic candidates who support Europe and the German-French friendship," he said, adding that Germany would work closely together with whichever president the French people chose.

On Monday, German commentators mull over the consequences of the first round results.

"The silent majority that Sarkozy had appealed to in recent weeks has remained silent for now. His rival, the Socialist candidate Hollande, won a victory in the first round of the French presidential election. This in itself came as no surprise: The polls showed Hollande as the favorite. After this result, it will be even more difficult for Sarkozy to reverse the trend which has been obvious for months."

"The incumbent president had hoped for a surprise in the first round of voting. If he had managed to come in first, it would have given his campaign new hope and new life over the next two weeks. Among the Socialists, doubts might have grown that the uncharismatic Hollande could actually manage to become the second left-wing politician to become president in the history of the Fifth Republic. But so far, his strategy of focusing on the incumbent's poor track record and the general dislike of Sarkozy as a person has paid off."

"Sarkozy failed to take advantage of the euphoria of 2007 and his party's dominance in parliament to take steps to modernize France. Isolated reforms, such as raising the retirement age to 62 years, were not enough to reach that goal. France is weaker now than it was five years ago, both internally as a society and externally as an economic power. It would be too simplistic to blame the euro crisis alone for that."

"Nothing is bitterer than disappointed love. After five years of Sarkozy, many French no longer believe in the power of politics to change things. They suspect that the state of their country means they will have to make greater sacrifices for less pay -- something that creates fear, frustration and anger. That is the reason why many voters support the anti-European, nationalist demagogues of the radical parties."

"The moderate alternative, the Socialist candidate Hollande, may win the runoff election in two weeks' time. But he too has hardly been able to convince his compatriots. They doubt that he can reform France while at the same time meeting the expectations of his left-wing electoral base. For his voters, Hollande is the lesser of two evils, not their first choice."

"Even if the identity of the new French president will only be revealed after the runoff in two weeks' time, our sympathy already rests with Socialist Hollande, who came out clearly ahead in the first round. On May 18, he will, according to all forecasts, take office as the head of state of a country which is slipping into mediocrity, and whose people believe neither in reforms nor in continuing with 'business as usual.' Primarily, they are deeply disillusioned."

"The new president must catch up within a much shorter period of time with reforms that Germany has, albeit with a number of setbacks and confusion, been implementing since 1998. At the same time, he must restore the faith of impatient investors, whose confidence in French government bonds is dwindling. Furthermore, he must live up to the expectations of his supporters, who expect a swift change of political direction."

"Certainly, Hollande has not yet won the election. Sarkozy has not admitted defeat and for the next two weeks, he will focus his energies entirely on a purely negative campaign. But two-thirds of French people are sick of him as an individual. And the same majority considers his track record to be abysmal. Sarkozy's only chance is to undermine Hollande's credibility with permanent attacks, so that his voters stay home on election day."

"French President Nicolas Sarkozy, along with his supporter German Chancellor Angela Merkel, were longing for a surprise result, but it wasn't to be. Sarkozy had hoped to be able to generate momentum by winning the first round, which might, contrary to all expectations, have led to victory in the second. Merkel had been hoping that she could continue to count on Sarkozy for support of her frugal approach to European fiscal policy. But the big winner of Sunday's first round election is Sarkozy's Socialist challenger Hollande, who is now expected to win the runoff against Sarkozy unless he does everything wrong."

"The president had made himself too unlikable. His promise to use a second term to do those things that he neglected to do during his first term didn't sound convincing enough."

"There was, of course, one surprise in Sunday's result -- and it wasn't a pleasant one. The right-wing populist candidate Marine Le Pen out-performed even her father, who advanced into the runoff stage in 2002. It is a blemish on democracy -- a blemish that illustrates Sarkozy's failure in the ugliest manner possible. In an attempt to lure Le Pen's supporters, Sarkozy had verbally attacked immigrants and Muslims. Le Pen herself couldn't have done any worse. She can only rub her hands in satisfaction." 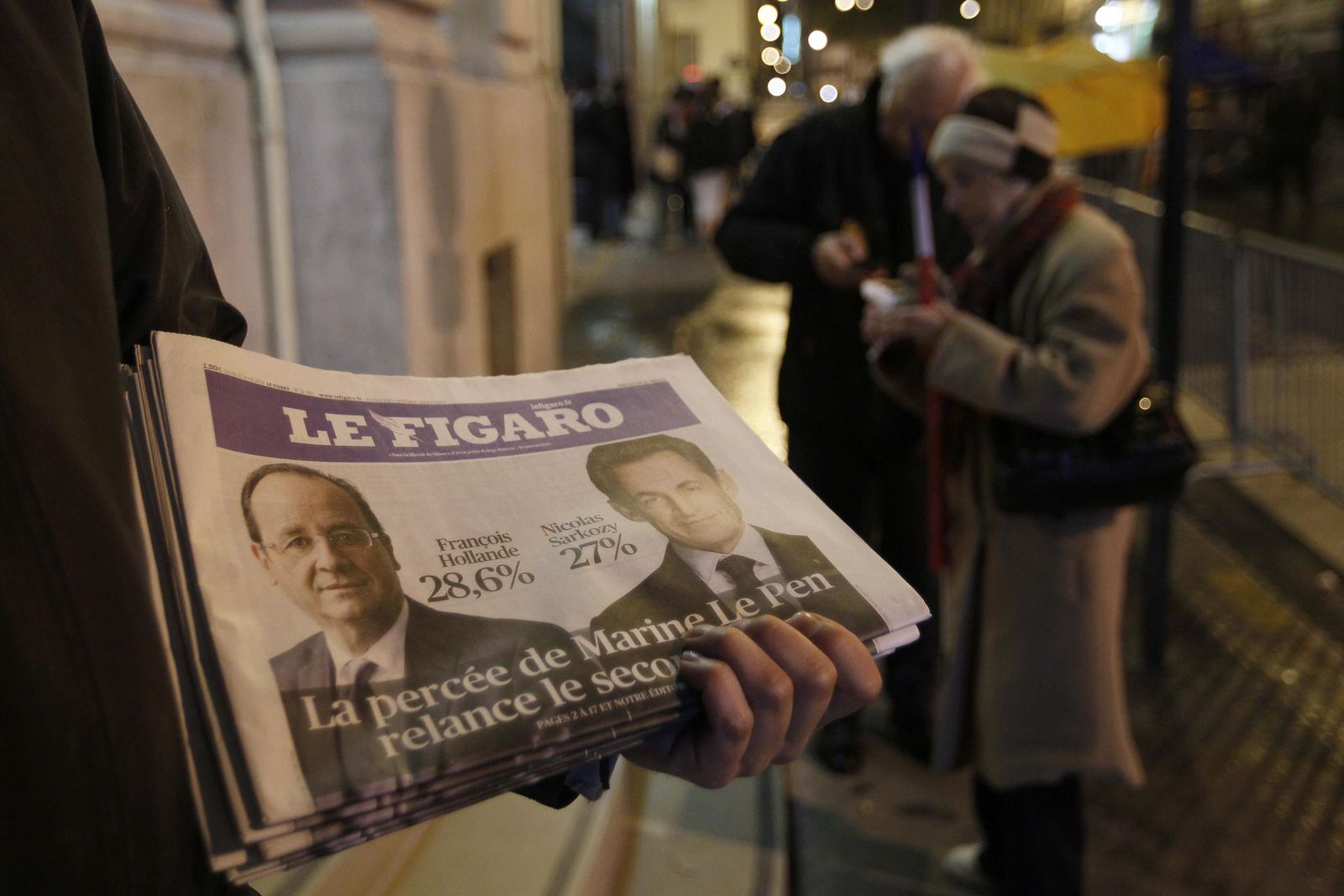 A newspaper seller holds copies of Le Figaro on Sunday evening in Paris.