Europe's leaders convening in Brussels on Thursday for an European Union summit are under intense pressure to come up with a new plan to save the euro, but they seem as divided as ever.

Chancellor Angela Merkel used uncommonly strong language on Tuesday when she rejected the idea for common euro bonds by saying Europe would not share total debt liability "as long as I live."

Their ideas would entail a dramatic loss of national sovereignty through the establishment of a central authority with the power to demand changes in individual members' national budgets. They would also involve a "medium term" move towards euro bonds, as well as a banking union with a single authority that would insure banking deposits and have the power to shut or recapitalize banks directly, with help from Europe's permanent bailout fund, the European Stability Mechanism.

Merkel's partners are pushing her to accept some form of collective debt issuance to ease the pressure on ailing states such as Spain and Italy, whose bond yields have risen to unsustainable levels in recent weeks.

German commentators say EU leaders will have to grasp the nettle and agree to at least the basic framework of a complete overhaul of the euro system if they want to save the single currency. Many agree with Merkel that euro bonds are the wrong answer, and that American calls for Germany to throw money at the problem won't solve the crisis, either. All countries will have to accept a loss of sovereignty to make the currency work in the long term -- and in the medium term, says one commentator, the European Central Bank should take a bigger role in tackling the crisis.

"Politicians like to dodge answers to the big questions because they are so risky. But politicians must now answer the euro question before it resolves itself with the collapse of Europe's currency: How much are you prepared to pay to keep the currency? The honest answer is this: If Europe's strong west and north want the euro, they will have to pay more for it. It will be expensive, not just for German taxpayers. At the very least, the wealthy regions of Europe will have to take on higher risks on behalf of the ailing states. Before that, the taxpayers will have to answer the question of whether they want to keep the euro. Is this currency the best one for them? The honest answer is yes."

"For economically strong countries like Germany, the euro opened up the markets of their neighbors for a lasting boom. To sever all the financial ties among the 17 member states after a euro collapse would cause immeasurable damage that would threaten Germany's jobs miracle. That's why it is the best thing to save the euro with transitional transfer payments."

"But ... every policy of providing aid must follow the logic that it tackles the cause of the crisis -- otherwise it will just cement the problem. Aid must only come in return for reforms, and that means economic modernization and that governments must no longer manage their deficits on their own. The model used so far, under which the individual states behave sensibly and make savings without being forced to, has failed. The euro can only be saved with a system of coercion. Brussels must have the power to decide on government spending in Italy, Portugal or wherever."

"That is the dilemma ahead of the EU summit on Thursday. The ailing euro states clearly need more help, but it is equally clear that this help mustn't cement the old mistakes."

"Due to this dilemma, the reality is more complicated than American demands imply. It's not just down to the stingy Germans who could solve everything by paying more."

"The chancellor shouldn't agree to aid that she cannot withdraw again if reform pledges are broken. Common debt, financed by euro bonds, cannot be nationalized again. If the German saver becomes liable for Spanish bank accounts, he won't see his money again."

"The aid instrument of choice is a different one: the European Central Bank could ease the financial pressure on Spain and Co. as far as necessary until the countries are stable again."

"Of course the ECB wasn't set up to provide this kind of help, but in truth it's been buying junk (government) bonds since 2010. Using the ECB for a quick rescue mission until Europe has developed into a stabilitiy union -- that is the way to finally get over this crisis."

"If the whole thing becomes reality, national governments will no longer have full power over how much they borrow. In the light of the public debt crisis -- which for the past two years has gripped politicians, citizens and financial markets and according to leading policymakers has plunged the EU (and the global economy) into an existential crisis -- this form of debt control is probably unavoidable. But it effectively means giving up national budget autonomy; the core power of parliaments would be transferred to a Brussels authority."

"One has to know that. But one could and should already have known when monetary union was launched that the euro can only achieve its expected stabilitiy if the member states maintain budget discipline and if they reform their economies so that they can withstand competition in the 21st century. That is why the debate about mutualizing debt via euro bonds is misleading, because it only continues the borrowing practices of the past."

"The four EU politicians propose a complete reconstruction of the monetary union into a real budget and economic union. At its core is a banking union with a powerful banking supervisory body (in which the ECB will be involved), a common deposit insurance for private accounts, and an institution, financed by banks, to save ailing banks. And that is the right thing to do: A currency union can only survive if the member states jointly vouch for it -- one will have to discuss what form that should take. It is good that the highest authorities have initiated a debate on the concept -- for the politicians, but for the citizens as well. Everyone must now be made aware that a bigger mutualization of budgets and finances must inevitably entail a loss of sovereignty for national governments."

"This is a warning to the chancellor and the other government leaders who don't like to relinquish their sovereignty. No one needs grand speeches calling for 'deeper political union' that aren't followed up by concrete policies. The leaders should agree to the grand outlines at the EU summit -- and leave the details to be sorted out by the finance ministers. All that won't affect the current battle against the crisis. The firefighting goes on."

"For the first time there's a plan on the table that tries to find a delicate balance between greater common liability and valid guarantees that it won't be abused. Things are going to get serious at this summit, the changes debated will go to the core. That isn't a bad precondition for the EU to finally show the determination it has claimed to have for the past two years, but has shown too rarely."

"The government leaders, and at some point all Europeans, will have to come clean on whether they trust one another to an extent that justifies sharing liability for the debts of others and curtailing national sovereignty. One has to take a deep breath to imagine saying yes to these steps." 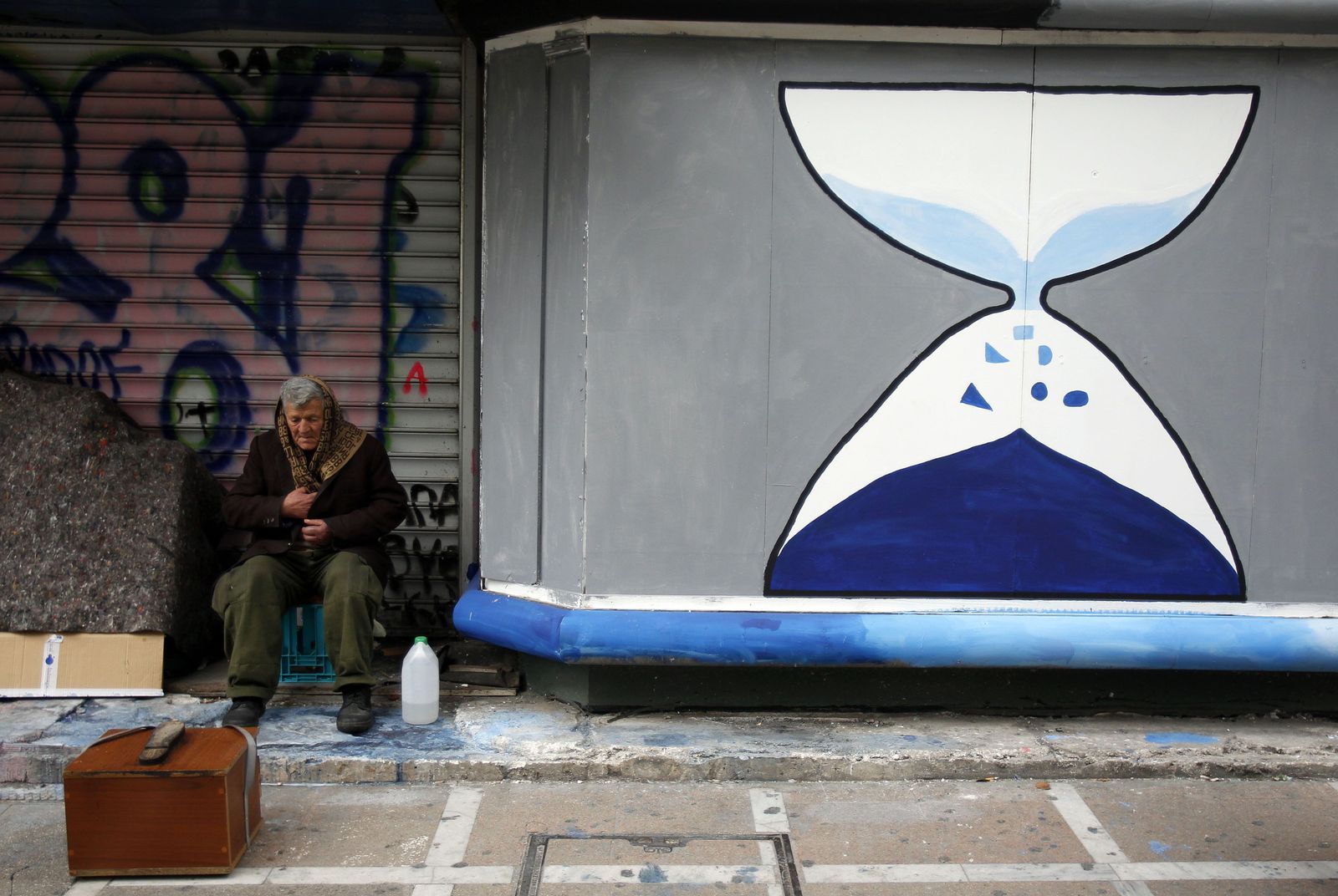 A shoe shiner tries to keep warm next to graffiti depicting an houglass in Athens: "Things are going to get serious" at this week's euro summit in Brussels.