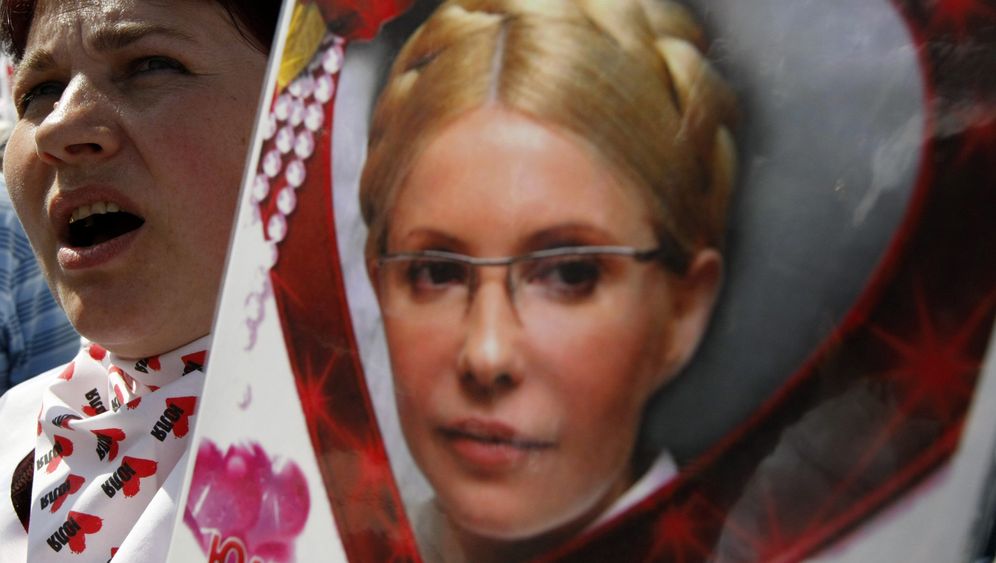 The conflict between the European Union and the Ukrainian government over its treatment of jailed opposition leader Yulia Tymoshenko appears to be entering a new, more intense stage.

German President Joachim Gauck has decided to cancel his planned trip to a summit in Ukraine in May, and on Thursday German Chancellor Angela Merkel indicated that she might not travel to the European Football Championship, which Ukraine is co-hosting in June. There have been calls for Germany to boycott the tournament in protest over the Ukrainian government's treatment of Tymoshenko.

On Friday, Ukraine was shocked by a series of attacks in the eastern city of Dnipropetrovsk, Tymoshenko's hometown. Four explosions went off in rapid succession there, injuring at least 27 people, including nine children. The first blast was caused by a bomb hidden in a trash can near a tram stop. The second, which happened 30 minutes later, was near a cinema, and the third on a busy street. A fourth blast was also heard in the city center.

It was initially unclear who was behind the explosions, or if they were related to the Tymoshenko case. The Ukrainian public prosecutor's office described the explosions as a "terrorist attack." A similar attack occurred in Dnipropetrovsk around half a year ago, but the perpetrator of that attack has not been caught.

Meanwhile, doctors from Berlin's Charité university hospital expressed their concern about Tymoshenko's condition at a press conference on Friday, calling on Ukrainian President Viktor Yanukovych to allow her to travel abroad for treatment. Hospital head Karl Max Einhäupl said that he believed successful treatment of the politician was only possible in Germany, given the chronic state of her condition. Tymoshenko suffered a slipped disc while in prison but has refused treatment from prison doctors out of concern that she could be poisoned.

Einhäupl said that Tymoshenko's condition had become more dangerous as a result of her current hunger strike, which has now entered its eighth day. Earlier this month, a team of doctors from the Charité examined Tymoshenko in the prison in Kharkiv where she is being held. A second visit is planned in the coming days, the doctors said.

Also on Friday, around 2,000 Tymoshenko supporters held a rally in the Ukrainian capital Kiev. Members of her party also blockaded the Ukrainian parliament in protest.

Tymoshenko is currently serving a seven-year sentence in Kharkiv, the northeastern Ukrainian city that will also host the June 13 soccer game between Germany and the Netherlands during the European Football Championship.

Last October, a Kiev court found Tymoshenko guilty of abuse of office in connection with a gas contract she negotiated with Russia. International observers consider the verdict to be politically motivated.

The Tymoshenko case has put a strain on the relationship between the Ukrainian government and the EU, which has reacted by indefinitely delaying an association agreement with Kiev that would bring the country closer to Europe.

On Friday, German newspapers take a look at Germany's position against the Yanukovych administration.

"When Ukraine was awarded the European Football Championship together with neighboring Poland, the country still seemed to be on track to become a democracy governed by the rule of law. And even under the current president, Viktor Yanukovych, the country insists it is a candidate for a future close partnership with the European Union. That would not only be in the interests of Ukraine but also of the EU. A democratic and prosperous Ukraine is the dream of the country's western neighbors, especially Poland. A chaotic Ukraine that is hostile toward the West is, by contrast, their nightmare.

"In this situation, the West can only pursue a dual strategy of exposing abuses and offering incentives. The politicized judiciary to which Tymoshenko and others have fallen victim must be exposed. But the incentive to return to democracy and the rule of law must also remain. In this context, the association agreement with the EU is ready to sign (if Ukraine changes its course)."

"But for that to happen, it is necessary for the West to constantly send signals of its disapproval. Those signals make it impossible for the Ukrainian leadership to pretend to their own people that the West accepts their behavior. It is therefore a good thing that President Joachim Gauck is shunning the summit of Central European presidents in Crimea. German politicians should also avoid going to the Germany games in Ukraine during the European Football Championship. That would send a strong signal."

"Gauck's decision to cancel his trip shows Yanukovych that the West, or Germany at least, doesn't want anything to do with him as long as he treats his former rival in a way that is unacceptable in Europe. Such signals are probably more effective than dark insinuations about the fate of the association agreement with the EU. After all, it also suits the EU if that agreement is ratified -- it is not in the EU's interests to let Ukraine fall back into the arms of Russia."

"Hence, the EU should only take diplomatic steps that show the Ukrainians that the West knows how to distinguish between a bad ruler and his people. Gauck's cancellation is appropriate in that respect."

"Gauck is showing courage in the way he implements his idea of freedom in reality, through awareness, clarity, a willingness to engage in conflict and sympathy. The fact that Gauck responded without hesitation to the violation of human rights in Ukraine is a strong signal -- and is also a signal to his own country that we cannot be indifferent to what happens in Eastern Europe."

"The fact that Yanukovych has stuck around a dozen of Tymoshenko's former followers -- some of whom are also ill -- in jail lends weight to the impression that the president is taking revenge on his political opponents. But Ukraine is not just any old state on the other side of the world -- it is considered a possible candidate for EU membership. Therefore, it is correct that Germany is sending a clear signal."

"One can only hope that the German government takes such a clear position, not only in its dealings with Ukraine but also in relation to other autocrats."

"Many people believe that the European Football Championship should never have been awarded to such a politically unstable country. But then the example of Ukraine is proof of the short half-life of political and moral standards during periods of historical upheaval. When the co-hosting of the European Football Championships was awarded to Ukraine and Poland in 2005 and 2007, the decision was cited as a signal of the new era ushered in by the Orange Revolution. There were hopes that the post-Soviet state would be able to free itself from the grip of old dependencies. It seemed to represent a preliminary step towards acceptance into the EU. Since then, however, the European ambitions of many Ukrainian citizens have been destroyed, and the European Championship threatens to become a vehicle that will strengthen the existing relationships of power and corruption."

"By canceling his planned trip to Ukraine, German President Joachim Gauck has proven that even in diplomatic relations there is an ethical line that should not be crossed."

In a guest commentary for mass-circulation tabloid Bild, Ukrainian world heavyweight boxing champion and democracy campaigner Vitali Klitschko advises sports fans on how to behave during the European Championships:

"I would ask all fans to travel to the European Championships in Ukraine and support their team, regardless of the tragic situation of Yulia Tymoshenko."

"The Ukrainian people do not deserve to be internationally isolated. The fault lies only with the ruling politicians and with president Yanukovych. Do not give these people a media platform, particularly not during the European Championships."

"In the case of Tymoshenko, we are fighting for her release and speaking to a lot of international leaders in business, politics and media, with the hope of putting pressure on the government, which is responsible for the imprisonment, sentencing and gruesome treatment of Tymoshenko and others."