Japan can finally breathe a sigh of relief. After more than a decade of economic stagnation, the country's economy is growing again, fuelled by the massive stimulus measures taken by new Prime Minister Shinzo Abe.

But the Japanese curse has not been eradicated. Many economists say it has merely moved. To Europe. And economic data released on Wednesday will have done little to counter that conviction.

The European Union statistics office on Wednesday noted that nine of 17 euro-zone member states are now in recession, with France being the newest significant member of that club. Furthermore, the common currency zone, with bloc-wide declines in economic output for six straight quarters, is now struggling through its longest recession ever, worse even than the downturn in the immediate wake of the 2008 financial crisis.

The currency area's persistent stagnation has raised concerns that Europe could be facing a "lost decade" like the one Japan recently lived through. Klaas Knot, head of the Dutch central bank and member of the European Central Bank board, is just one of many significant voices sounding the warning.

Strategy May Not Be Working

Tellingly, Japan's recent up-tick in growth has come as a result of Abe's injection of €90 billion ($116 billion) into the economy despite the country's huge sovereign debt burden of over 200 percent of gross domestic product. Europe, meanwhile, remains focused on austerity and structural changes as its preferred strategy in dealing with persistent challenges facing the euro and high debt in many euro-zone member states.

France's new membership in the recession club is just the latest indication that the current strategy may not be working. Indeed, it seems likely that pleas by French President François Hollande, under extreme pressure for his not altogether adept handling of the economy, for greater economic stimulus will only grow louder. The European Central Bank likewise hinted recently that it was willing to loosen monetary policy further, cutting the euro-zone interest rate by a quarter point at the beginning of this month.

At the same time, however, ECB head Mario Draghi urged that countries not "unravel" their progress on reducing deficits and debt. European Commission President Manuel Barroso likewise demonstrated on Wednesday that the focus remains on restructuring rather than stimulus. He demanded that Paris present a "credible reform program so that France can regain its competitiveness." He added: "The truth is that France has lost competitiveness over the past 20 years." Germany, too, has shown no interest in backing away from austerity.

German dailies take a closer look at the economic miasma that has befallen the euro zone as well as at the most recent critical case across the border in France.

"We Europeans are gazing longingly across the Big Pond and wondering why we have not been granted (the same positive economic news as the US). And the answer suggests itself: Because we may very well have gone too far with austerity."

"The comparison between the US and the EU is currently a comparison of two economic doctrines that could hardly be any different. The Old Continent has chosen a brutal strategy which, on the drawing table, works like this: You cut your way to health, reduce the salaries of those employees you don't fire. That increases competitiveness and you can then grow again, faster and more balanced than before. That one slides into a recession at the beginning is part of the plan. But the fact that it is lasting so horrifically long leads one to suspect that Europe's path is making the Continent sicker rather than healthier."

"European leaders should attempt to protect the economy by slowing the state's retreat. A long-term, ambitious plan for cutting spending remains necessary. But it should be shallower and should be connected to the cyclically adjusted deficit. The fact that economically liberal institutions like the International Monetary Fund and the Office of Economic Cooperation and Development are of the same opinion should not scare us off."

Barroso's observation about French competitiveness "is essentially a demand that Hollande, against the wishes of his left-wing critics, launch a courageous reform program to boost the economy. That would be necessary and desirable, and not just for France."

"Because if the French lose their courage, if their economy is left behind and if their political leadership remains weak and indecisive, then that is bad for Europe. Paris is fond of complaining about austerity and its allegedly harmful effects on growth. But where are the ideas or the visions for how the EU can exist in our highly competitive world? There are none. The French disillusionment is also bad for Germany, which threatens to lose its primary partner. ... At the beginning of his second year in office, President Hollande has to admit that things cannot continue as they are. Germany cannot do everything on its own. And even a strong chancellor needs a strong partner."

"Driven by their fetish of 'competitiveness,' a part of the European Commission and German Chancellor Angela Merkel … are trying to better position Europe globally by way of reducing hard-fought employee rights and social standards in all countries. Cuts in unemployment benefits, reductions in worker protections, lower pensions, expansions to limited work contractions … and weakening the unions: Those are just some of the ideas that are on the table. European Union countries are to pledge to reform their social and labor systems so that they conform to the market."

"What should be done to counter such plans? ... So far, alternative models for how to stimulate Europe's economy and fairly tax wealth exist only on paper and must be finalized. When it comes to linking European protest movements and coordinating salary demands ... the unions are hopelessly behind. And European, and particularly German, Social Democrats (and the Greens in Germany) have not emerged as credible opponents to austerity. On the contrary."

"But if the neo-liberal and post-democratic restructuring of Europe is to be stopped, only frontal opposition will prove effective. The existence of Europe is at stake." 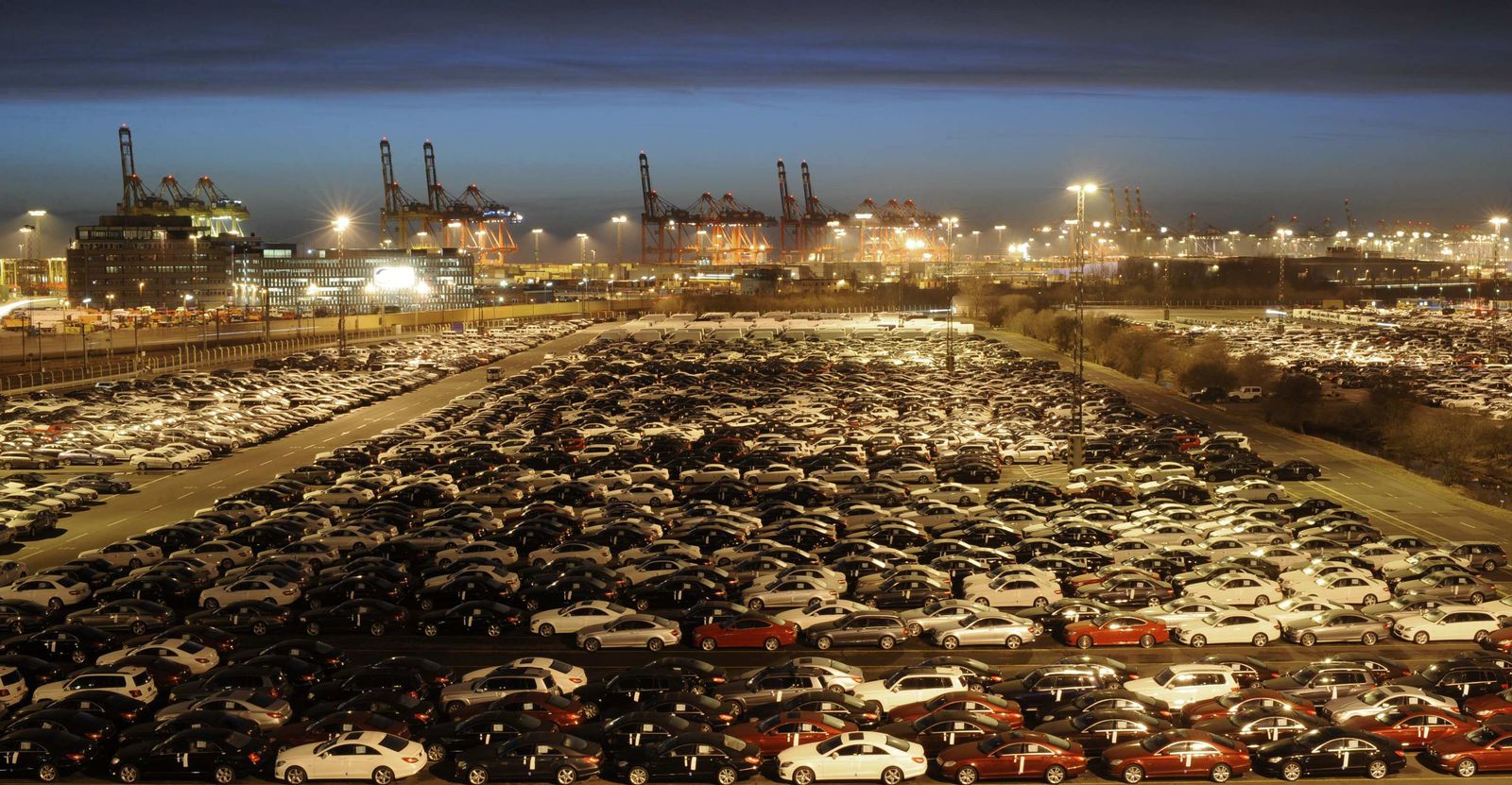 The German economy is still growing, but only barely. Here, the port of Bremerhaven.