The sleepy German town of Karlsruhe became the unlikely setting for a key chapter in the euro drama on Tuesday.

Market players in fast-paced financial centers like London, New York, Frankfurt and Paris spent hours staring at their screens, with mounting confusion and increasingly glazed eyes, waiting for news from a 10-hour hearing held by Germany's Federal Constitutional Court that could determine the fate of Europe's currency.

All they wanted was a quick yes or no from the court, which convened to weigh a request from plaintiffs that it pass a temporary injunction barring a German law on the permanent euro rescue fund and the EU's fiscal pact from coming into effect, pending the court's final decision on the matter.

The court didn't oblige, and indicated that it might take up to three months, rather than the expected three weeks, to rule on whether to impose the injunction.

The plaintiffs, including the opposition far-left Left Party and a group called "More Democracy" representing 23,000 signatories, argue that by signing up to the €500 billion ($610 billion) European Stability Mechanism and the fiscal pact enforcing debt reductions, Germany will jettison too much sovereignty and undermine the power of its democratically elected parliament to determine what happens with taxpayers' money.

Finance Minister Wolfgang Schäuble had urged the panel of eight judges at the hearing not too wait too long, arguing that a delay in launching the ESM could lead to further turmoil in financial markets. The ESM was due to have gone into operation on July 1 but can't start until Germany has finally ratified it.

But now it looks as though Europe will be left on tenterhooks until the autumn on whether it can go ahead with its crisis-fighting strategy agreed by EU leaders in painstaking negotiations dating back to last year.

The court decided to take its time because its ruling on the temporary injunction in this case will be tantamount to a final decision.

If the court rejects the injunction, thereby permitting the German president to sign into law the bills passed by parliament on June 29, they can no longer be revoked, even if the court were to decide months later that the laws are in fact in breach of the constitution.

That is because the ESM and the fiscal pact are part of international treaties. Once they are ratified, Germany will be bound by international law to adhere to the legislation.

Most German media commentators writing in Wednesday's newspapers say the court is right not to let the government and financial markets badger it into taking a swift decision. They also point out that in past rulings on the euro crisis, the court hasn't blocked the government's actions beyond requesting greater parliamentary involvement in bailout decisions, and has shown a pragmatic awareness of what is at stake for Germany and Europe.

"It's not inconceivable that the constitutional court could split apart the EU at a critical point. But it's very unlikely, given the rulings Karlsruhe has issued over the last 60 years. It will make a clear and possibly sharp statement about the need for parliament to have a say in taking on liability in EU programs. But the judges have always recognized the political intentions on which the controversial plans were based. The judges have always indicated that they are by no means bent on setting the legal status quo in stone for ever."

"In the Bundestag, the speed of a decision has unfortunately become more important than its quality. That mustn't serve as an example for Karlsruhe. It is good therefore if the court takes its time -- even for a preliminary decision, because it would in this case prejudge its final decision."

"Karlsruhe must find ways and means for continuing to build Europe in a way that doesn't destroy elementary features of the constitutional state. The success of this search is of vital importance for Germany and for the EU. It is more important than a brief round of applause from the markets for a speedy decision."

"It's true that if Karlsruhe were to force Germany to back away from the euro bailout fund there would be major turmoil. After all, the ESM together with the fiscal pact was created to prevent even worse things from happening. And it is difficult to argue against horror scenarios -- basically the only counter-argument is to present an even worse scenario. After all, a rescue of the euro at any price could spell the end of the euro."

"To prevent this process from destroying responsible, nationally accountable policymaking, Germany must at all times have its guiding hand on this bailout fund. The fact that the constitutional court is taking the time it needs amounts to the first decision in the case: a sign of calm against the diktat of hectic European decision-making and chronically nervous markets."

"Europe will have to wait three months for the German ruling rather than three weeks. It sounds harmless but it could turn into a life-threatening endurance test for a fragile currency union. From a domestic German point of view, it's legitimate to take this time for deliberation. After all, the court faces one of the toughest decisions in its history."

"German taxpayers are liable for at least €300 billion through the ESM and the current bailout programs. A sum equal to all the money the national government spends in one year on unemployed people and pensioners, on roads and nurseries, is being put at risk for banks in Madrid or public officials in Athens. These commitments are so binding for German lawmakers that future generations will barely be able to influence anything and their voting rights will be undermined. The plaintiffs don't want to accept such an infringement of democracy."

"From outside, though, the facts look different. Monetary union is a European project that was initiated to a key extent by the Germans and which was shaped in line with their political visions. Now the tensions in the euro zone are threatening the standard of living in large parts of the continent. The Spaniards haven't only met all their deficit-cutting requirements. They are also pushing ahead with the desired changes at a speed no one had thought possible, just like the Italians, the Irish and the Portuguese."

"But their governments still have to pay horrendously high interest rates to creditors. They are paying the price for the doubts about the survival of the euro zone. These burdens are undoing all the austerity and reform efforts. This mistrust can only be overcome with the solidarity of all members of the monetary union."

"If the Germans were now to be prevented by their constitutional court from doing so, Europe would face an economic disaster that would engulf even the biggest euro member country. The support is therefore in the national interest and is well justified beyond any altruistic considerations."

"The center-right coalition and the opposition Social Democrats and Greens voted for this support in the German parliament because they see the risks entailed as smaller than the danger of doing nothing. That is a plausible weighing of risks that -- with all respect -- even judges are no better at doing than elected politicians." 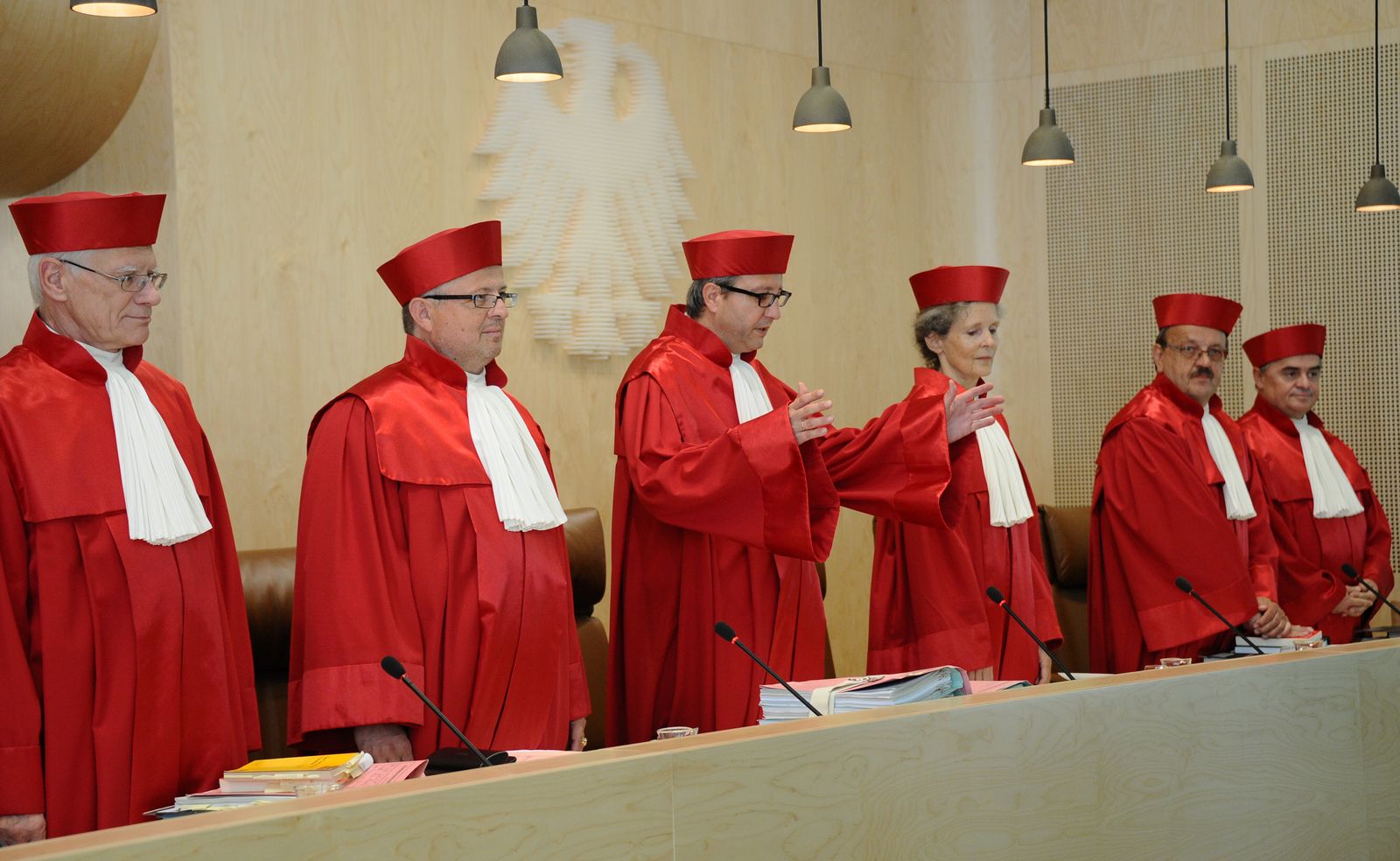 The judges of the Federal Constitutional Court won't be rushed into a ruling.