One year ago, the mood among Germany's Social Democrats (SPD) was one of elated optimism. In May 2012, Socialist Party candidate François Hollande won the country's presidential elections, opening up the possibility that a right-to-left changing of the guard might be possible in Germany too. Just weeks after his victory, Hollande invited the SPD leadership to Paris to allow them to bask in his popularity.

On Friday, SPD chancellor candidate Peer Steinbrück is once again in Paris. But even as the general election campaign in Germany ahead of the vote this fall has begun to heat up, the mood on the Franco-German left has cooled. With Hollande's public opinion poll scores plummeting, his country's economy in trouble and his government mired in scandal, he looks to have very little sparkle left to lend to his cross-border political ally.

And Steinbrück's campaign too seems to have reached an impasse. A new poll in Germany indicates that, were Germans able to vote directly for candidates (rather than for political parties), only one in four would cast their ballot for Steinbrück, against 60 percent for Chancellor Angela Merkel. Furthermore, only 32 percent approve of the job he is doing, his lowest such score since he entered federal politics in 2005, according to a survey released on Thursday evening by German public broadcaster ARD.

Taken together, the travails facing the two politicians amounts to a fading of hopes, particularly among euro-zone member states struggling under the ongoing euro crisis, that Hollande's election would mark a resurgence of the European left -- and an end to Merkel's austerity-first approach to the common currency's woes.

Hollande as a Risk

Steinbrück tried to put a brave face on the situation on Friday. Hollande, he noted, had only been in office for 11 months and cannot be expected to have taken care of all the problems "that his two conservative predecessors didn't address in the last 10 to 15 years." He also said that a successful Hollande is in Germany's interest so that the Franco-German partnership can once again take up its traditional role as the motor of Europe.

But even the SPD has become concerned about identifying itself too closely with Hollande. As difficult as the French president's relationship with Merkel is -- a product of conflicting approaches to the euro crisis but also the result of Merkel's open support of former President Nicolas Sarkozy in last year's French campaign -- Steinbrück and his party are beginning to see Hollande more as a risk than a potential boon in the run up to the German vote.

For one, Germans are generally supportive of Merkel's handling of the euro crisis thus far, with the Thursday ARD survey indicating that only 33 percent of those polled agree with the statement that "Berlin doesn't care enough about how people in crisis-stricken euro-zone member states are doing." And Hollande himself appears to have had little luck in proving himself as an effective crisis manager. His administration has been unable to meet deficit reduction targets, many analysts believe that France could become the next euro-crisis hotspot and unemployment in the country has risen close to record levels in recent months.

Still, the pair of scandals is the last thing that a reeling Hollande administration needs. Furthermore, Steinbrück himself has not always been overwhelmingly impressed by his French ally. Merkel's finance minister from 2005 to 2009, Steinbrück does not approve of Hollande's introduction of a 75 percent tax on top earners in France. He recently referred to it as a "prohibitive tax" and said he would never introduce such a law in Germany.

Despite the subdued mood between the two leftist camps, however, Hollande made sure to roll out the red carpet for Steinbrück on Friday. The SPD candidate was given top level meetings with both Socialist Party head Harlem Désir and Prime Minister Jean-Marc Ayrault.

Hollande, too, took an hour out of his schedule to meet with Steinbrück. But the pair decided to forego a joint appearance on Friday. Following the tête-à-tête, Steinbrück strode out of the Elysée Palace alone -- and rushed right past the media gathered outside.

With reporting by Veit Medick in Paris 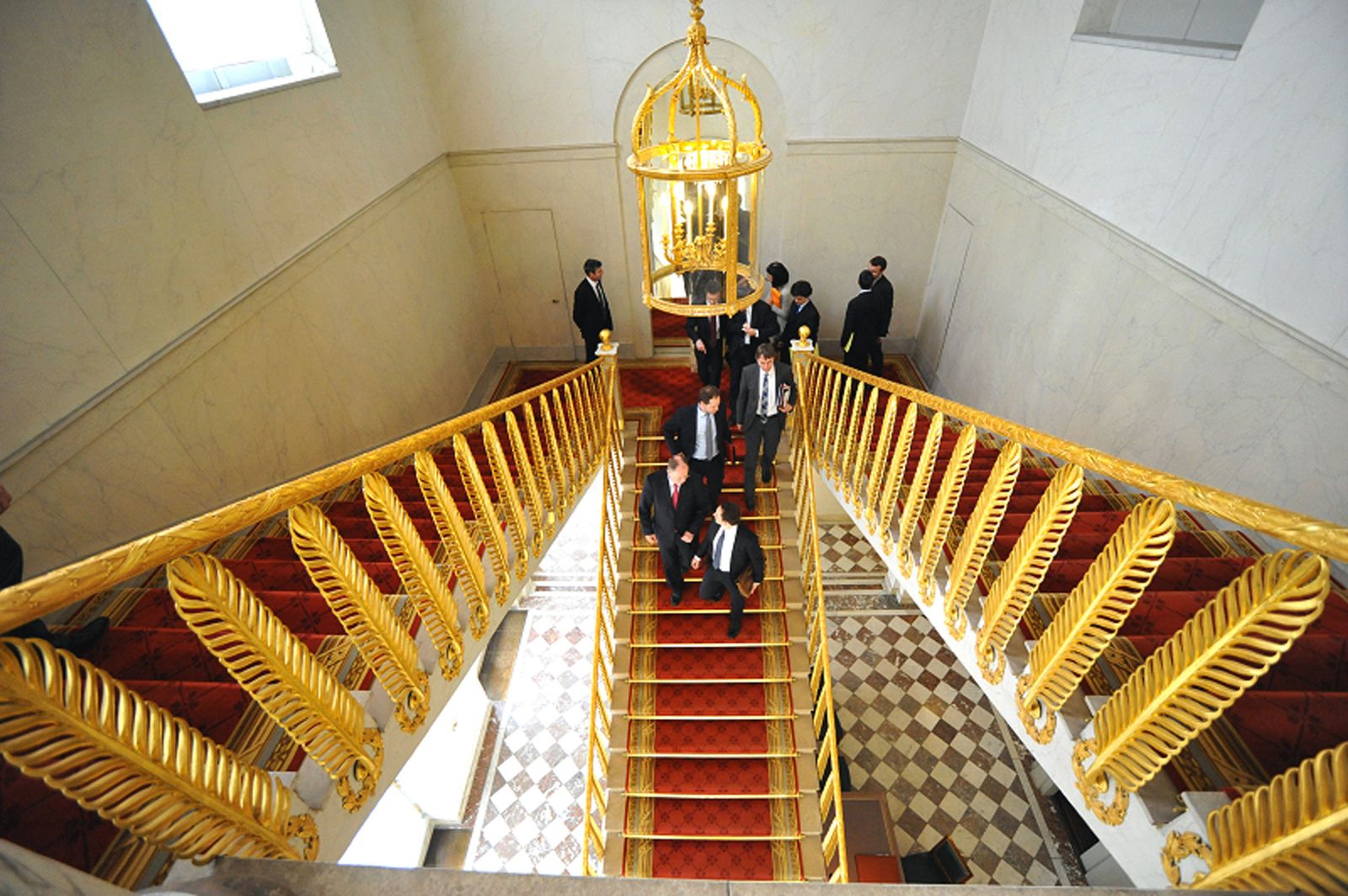