The euro has failed, though more politically than economically, according to an article in the September edition of US magazine Vanity Fair. "Conceived as a tool for integrating Germany into Europe, and preventing Germans from dominating others, it has become the opposite," financial journalist and author Michael Lewis writes. "For better or for worse, the Germans now own Europe."

The fact that a reunited Germany has weathered the Western world's financial crisis with ease, at least so far, has made its neighbors and friends uneasy. In the political salons of Washington and Paris, from Brussels to Madrid, and inside political broadsheets and think tanks, people are asking whether the new Germany is altering its foreign policy. Is Berlin turning away from the European Union, or is it the opposite, that it wants to use the currency to gain control of the entire continent -- something it couldn't do with weapons?

Geostrategists point to the emergence of a power imbalance, along with possible new conflicts between rival countries. In a guest commentary published by The New York Times last week, Former British Prime Minister Gordon Brown criticized Germany's approach. "Germany's recent failure to act from a position of strength endangers not only the country itself, but the entire euro project that Germany has spent decades developing," he wrote. Other commentators complain that Germany is once again veering towards unilateralism, and some, mainly in Britain, are even referring to a "Fourth Reich." But at the heart of this debate remains the question: Where is Germany headed?

In Washington, Chancellor Angela Merkel is seen as an uncertain ally. The Americans question whether she has truly left her East German past behind, or if she is rediscovering it -- at least in terms of Germany's interests. "Europe's Economic Powerhouse Drifts East," a headline in the The New York Times claimed in July.

Conservative writer Ariel Cohen has even suggested that a "New Axis" has formed between Germany and Russia. The situation calls to mind the Italian seaside city of Rapallo, where both countries met in 1922 to sign a treaty of cooperation that indicated mistrust in the Western victors of World War I, he said. Conspiracy theorists have easily found fodder to justify this idea. Did not Germany recently join Russia and China in withholding their votes in the United Nations Security Council decision to allow NATO intervention in Libya? Didn't the German defense company Rheinmetall just construct a training center for Russian troops to the tune of €398 million ($575 million)? And didn't Germany just pledge to give up nuclear energy without consulting its European neighbors, which the Americans fear will lead to dependence on Russian gas?

"Right now there is a lot of uncertainty about Germany's possible turn towards the East," says Europe specialist Heather Conley, from the Center for Strategic and International Studies. Berlin's is on the brink of a new era in foreign policy based more on interest-driven politics than the perceived selflessness of a pan-European paymaster, an image that developed during former Chancellor Helmut Kohl's era. "During the G20 summit in 2010 in South Korea, Germany was suddenly on China's side and against the US when it came to reducing export surpluses," Conley says. "That scared a lot of those who prefer Germany's traditionally trans-Atlantic orientation."

In light of its strength, Germany needs to start asking itself a question that has long worried American politicians: As an export powerhouse, how does the country search for new markets in Russia and Asia without snubbing its traditional allies? Those allies include the other European Union nations, and their concern about Germany is growing.

The failure of "la Merkel" to phone French President Nicolas Sarkozy about her decision to phase out nuclear power has also been poorly received. For months, she "hasn't stopped shirking her European obligations," says Edouard Tétreau, a professor at the elite business school HEC Paris.

The paradox of Germany's role is that the country is simultaneously too strong and too weak to lead Europe, says a research director at the Center for International Studies and Research in Paris, Anne-Marie Le Gloannec. While the country may be globally oriented in economic matters, its policies are too inward-looking, she says. For decades, Europe was practically Germany's reason of state. But since reunification the country has "fewer reserves and even less patience to keep the European system running," Le Gloannec says.

Among France's right-wing politicians, there are warnings that Germany could become a superpower if Europe's debts are bundled. "That would be a dead-end," says Jacques Myard of Sarkozy's center-right UMP party. "The debts are enormous and Germany would demand guarantees. We'd be under Berlin's command."

All Hail the Conquerer?

Political scientist José Ignacio Torreblanca, a Europe expert for the European Council on Foreign Relations in Madrid and a regular commentator for newspaper El País, says many Spaniards fear Germany is no longer EU-oriented. Instead, Berlin wants the rest of Europe to follow its example and become more German, he says. The trust of Europeans in Germany's solidarity has eroded. Germany is forcing its economic model on other EU nations "with the logic of a conquerer against the conquered."

Prosperous Germany's apparent plan to instruct other EU nations on how they should handle their finances has displeased many in Europe. "The government is trying with all its might to export the German concept of budgetary policy," says Daniela Schwarzer, Europe expert for the German Institute for International and Security Affairs says. Still, Merkel's counterparts across Europe have put up little resistance.

Politicians in countries like France, Spain and Italy fear credit downgrades and negative market reactions, and have thus avoided resisting pressure from Germany to make savings. "The necessary debate over whether the German debt brake model makes sense for other countries is not taking place," says Schwarzer. Perhaps commentators abroad are also speaking on behalf of overwhelmed politicians when they unleash their frustrations on the Germans, then. 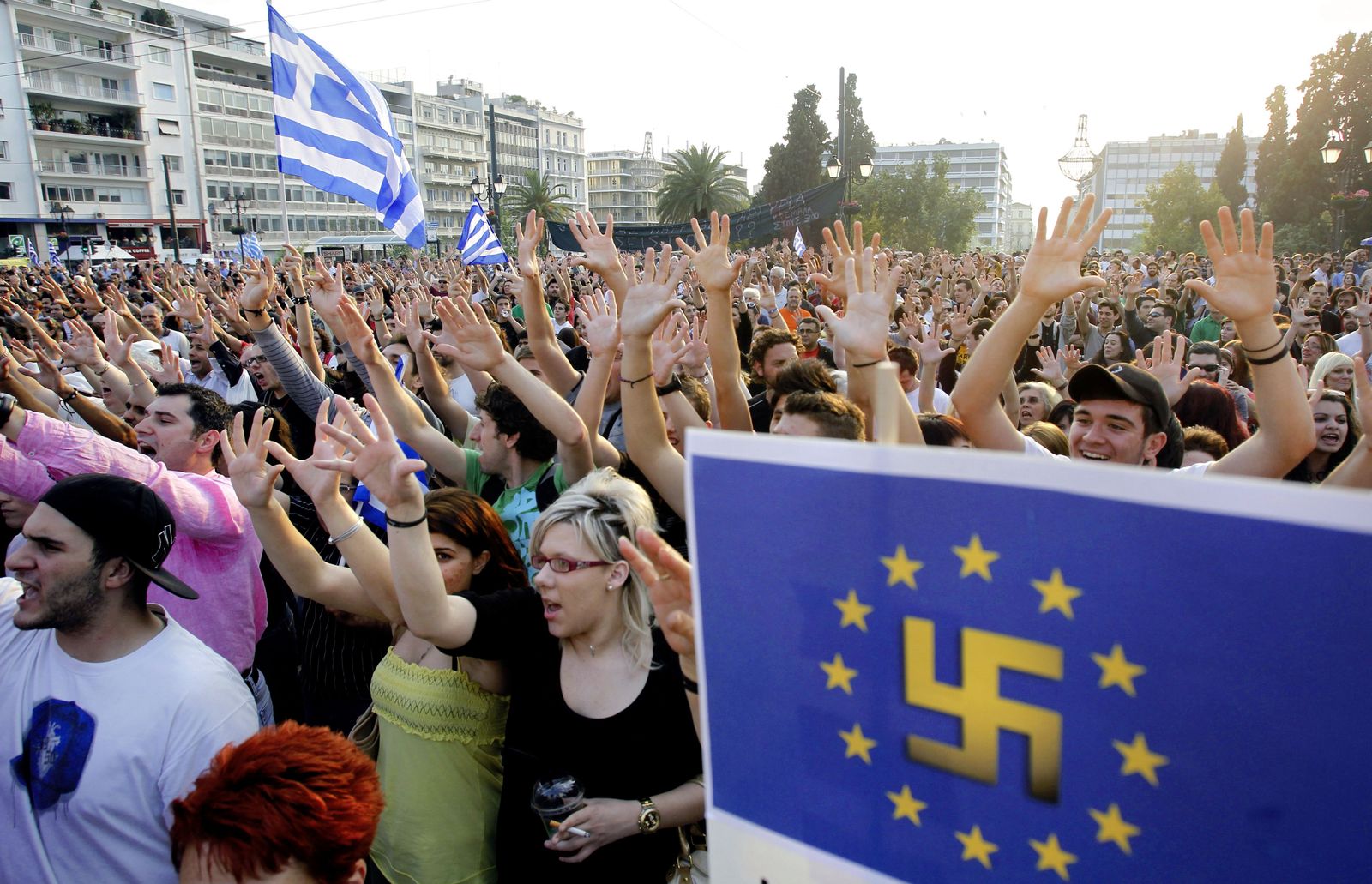 Protesters in Spain aren't happy with Germany's drive to dictate their austerity measures.