Germany and other important international creditors are not prepared to extend further loans to Greece beyond what has already been agreed, German newspaper Süddeutsche Zeitung reported on Monday. In addition, SPIEGEL has learned that the International Monetary Fund (IMF) too has signalled it won't take part in any additional financing for Greece.

The Süddeutsche Zeitung cited an unnamed German government source as saying it was "inconceivable that Chancellor Angela Merkel would again ask German parliament for approval for a third Greece bailout package."

Merkel has had difficulty uniting her center-right coalition behind recent bailout decisions in parliamentary votes and would be unwilling to risk a rebellion in a another rescue for Greece, the newspaper reported.

Meanwhile, German Economy Minister Philipp Rösler said on Sunday he was "more than skeptical" that Greece's reform efforts will succeed. "If Greece no longer meets its requirements there can be no further payments," he said in an interview with German public broadcaster ARD. "For me, a Greek exit has long since lost its horrors."

Athens wants to soften the terms of a €130 billion ($157 billion) bailout, the second rescue package for Greece, agreed to last March with the European Union and the IMF, to lessen their impact on an economy going through its worst recession since World War II.

Athens must reduce its budget deficit below 3 percent of GDP by the end of 2014, from 9.3 percent of GDP in 2011 -- requiring almost another €12 billion in cuts and higher taxes on top of the €17 billion successive governments have cut from the budget shortfall.

The left-right coalition of conservative Prime Minister Antonis Samaras is under intense public pressure to ease the burden on Greeks. Samaras said on Sunday that Greece was in a "Great Depression" similar to the one in the US in the 1930s.

Athens has conceded it had slipped "in some respects" in implementing the cuts and reforms required by its creditors. Finance Minister Yannis Stournaras made the admission following a meeting with senior officials from the so-called "troika," made up of the European Commission, the European Central Bank and the IMF, which has been checking the country's accounts this month.

Greece argues that its reform efforts were slowed by the two national elections in May and June and wants its lenders to give it two more years to achieve the budget goals to avoid an even deeper economic slump. But its lenders have opposed the idea because it would require even more financial aid.

'Greece Must Catch Up'

SPIEGEL has learned that the troika expects that granting Greece more time would require additional aid of between €10 billion and €50 billion. The troika's report on Greece's reform progress could determine whether the country gets its next instalment of €31.5 billion in aid under the second aid package. If it doesn't get the instalment, Greece risks running out of cash within weeks.

German Finance Minister Wolfgang Schäuble made guarded comments about Greece on Monday. Asked if the country would have to leave the euro if the troika inspectors filed a negative report on its reform progress, Schäuble told German newspaper Bild: "I won't pre-empt the troika. If there have been delays, Greece must catch up. When the troika submits its report, the Euro Group (of euro-zone finance ministers) will discuss it."

But even if the next tranche of aid weren't paid out and the Greek government were forced to declare bankruptcy this autumn, it is unclear what would happen. EU treaties don't give the bloc the power to evict a country from the single currency union. 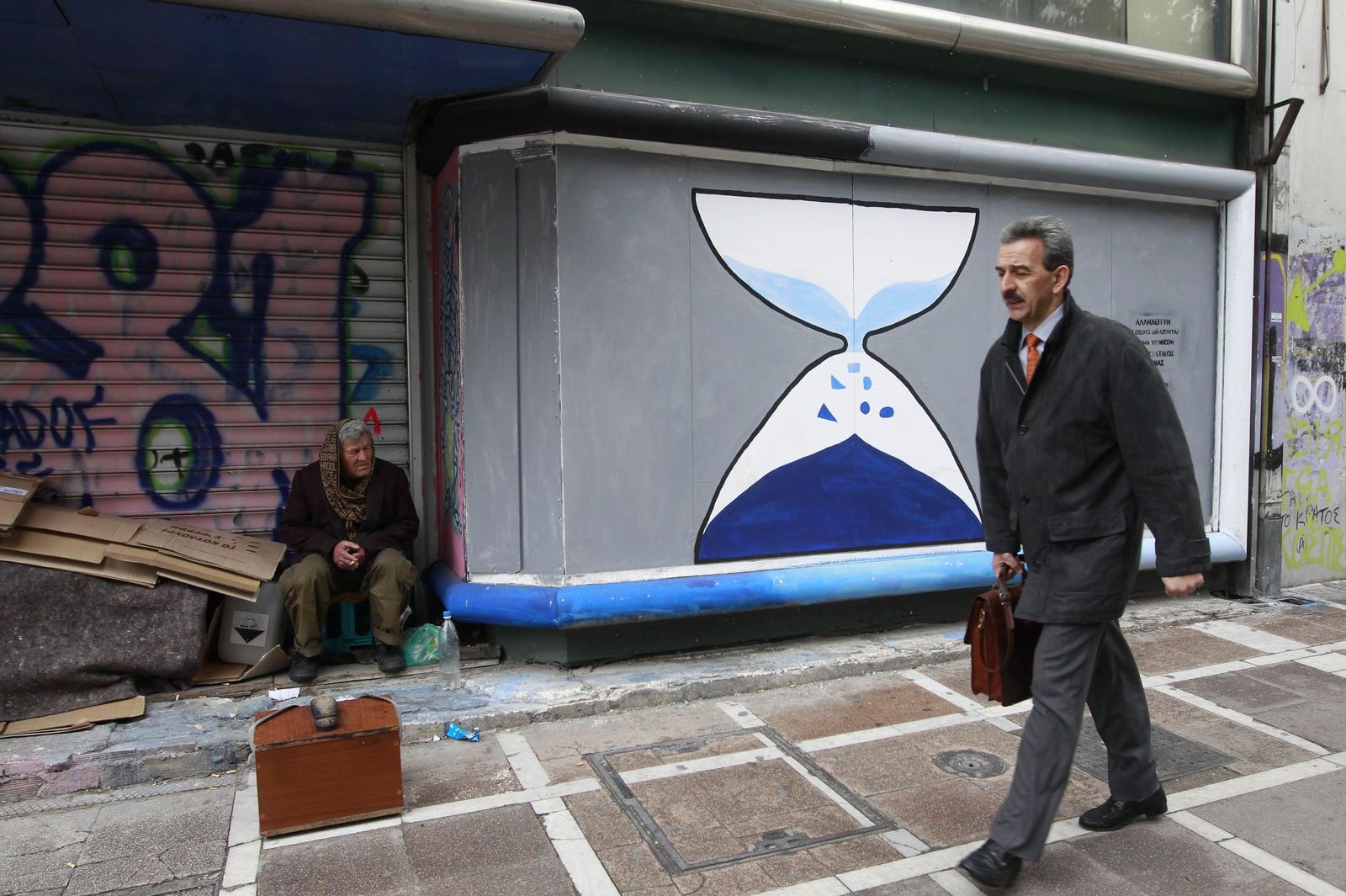 A street scene in Athens. Greece is in its fifth year of recession and has fallen behind with budget cutbacks and reforms demanded by international lenders.