The conflict was never really that far away. Right in the middle of the European Union, in the most popular destination country for German vacationers, the Spanish government and Catalan separatists have been sparring heavily with each other. The German government has always tried to stay out of the conflict. Officials have stated repeatedly that what is happening in Catalan is a domestic conflict that needs to be solved peacefully and within the scope of the Spanish constitution.

Now this: Catalan separatist leader Carles Puigdemont is sitting in a German jail after his arrest on Sunday by German police as he was traveling back from a speech in Finland to Belgium, where he has been staying for months now. Police conducted the arrest after Spain issued a European Arrest Warrant. Suddenly, Germany, which only swore in its new government just days ago, is right at the center of the battle between the Spanish central government and Catalan independence efforts.

A Case for the Judiciary

Officially, the government in Berlin is maintaining its position that it will not interfere politically in the domestic conflict -- especially when it comes to the currently pending court proceedings relating to Puigdemont's possible extradition. And in this special case, German federalism may actually be helpful to the federal government. The universal line in Berlin is that the judiciary in the state of Schleswig-Holstein will be responsible for deciding on whether to extradite Puigdemont.

Puigdemont on March 22 in Helsinki, Finland

The 55-year-old former president of Catalonia has become a symbolic figure for other separatists across Europe, but in Spain, the central government views Puigdemont as a man guilty of several crimes. Following the referendum on Catalonia's independence in October 2017, an act the central government in Spain considered illegal, proceedings have been opened against Puigdemont on charges of "rebellion" and "sedition." Many of his fellow separatists are currently in jail in Spain.

German Chancellor Angela Merkel's spokesman, Steffen Seibert, said on Monday that the Spanish government has repeatedly pointed out "that Puigdemont and others aren't being sought for their political views, but for concrete criminal matters." The conflict over Catalonia, he said, must be "solved within Spain's legal and constitutional systems," which is why the German government has supported the actions of the Spanish government in this conflict. "Spain is a democratic constitutional state," Seibert said.

German Justice Minister Katarina Barley of the center-left Social Democratic Party (SPD) on Monday referred queries to the justice authorities in Schleswig-Holstein. And German Foreign Minister Heike Maas of the SPD, who was on his first trip to Israel since taking office, and officials at the Interior Ministry also offered no comment.

But even if German officials are playing it cool, the latest developments in the Puigdemont case are indeed politically explosive for Berlin.

The German government is convinced separatist movements pose a threat to the cohesion of the European Union. So far, at least, Berlin has rejected taking on a mediating role in the crisis. And there are no signs that the new government is likely to view this any differently than the outgoing one, even if some in the coalition are gently encouraging a mediation mission. "The increasing militancy of a part of the independence movement does not bode well," Rolf Mützenich, the deputy head of the SPD group in the German parliament, told SPIEGEL. "The German government could take an active role in mediation efforts at the European level."

Mützenich is highly critical of Sunday's arrest. "The judges will no doubt conduct an in-depth legal review of the case while considering the leeway available to them," he said. "But politically, I consider Puigdemont's arrest to be questionable," added the SPD politician, a foreign policy expert, who also said his skepticism is based on the role played by some elements in the Spanish judiciary. "Certain Spanish judges appear to be following political guidance. But lasting peace in the conflict with Barcelona can only be obtained if the central government is serious about it and prepared to make compromises." He said the EU needs to finally step up and use its options for making "the consequences of their actions clear to all involved."

The Tone in Berlin: Stay Out of It

You get an altogether different view if you speak to representatives of the conservative Christian Democrats (CDU), who share power with the SPD as the senior partner in Germany's coalition government. CDU domestic affairs and legal expert Volker Ullrich warned against allowing the situation to get "politically charged." He said German politicians should not intervene in the extradition proceedings.

It will be hard enough just preventing that impression. From a legal perspective, there are no objections to Puigdemont's arrest, "but it creates big political problems," Alexander Graf Lambsdorff, the foreign policy point man for the business-friendly Free Democratic Party (FDP) told the Augsburger Allgemeine Zeitung newspaper. He said the extradition proceedings would make Germany a party to an internal Spanish conflict -- a development that Belgium, where Puigdemont had been staying, has itself tried to avoid at all costs.

Fellow party member Bijan Dir-Sarai, the foreign policy spokesman for the SPD's party group in parliament, said that Germany could not take sides in the conflict. "What we are dealing with here is a legal matter, not a foreign policy issue," he said. Meanwhile, Omid Nouripour, a foreign policy expert with the Green Party, viewed the situation similarly. "Whether Puigdemont will be extradited will be determined by the judiciary -- politicians need to stay out of this."

The most critical comments came from Andrej Hunko, the European policy spokesman for the far-left Left Party's parliamentary group. He said Puigdemont's arrest had been a "disgrace" and ordered the separatist leader's release. But the party appears to be alone on that point. 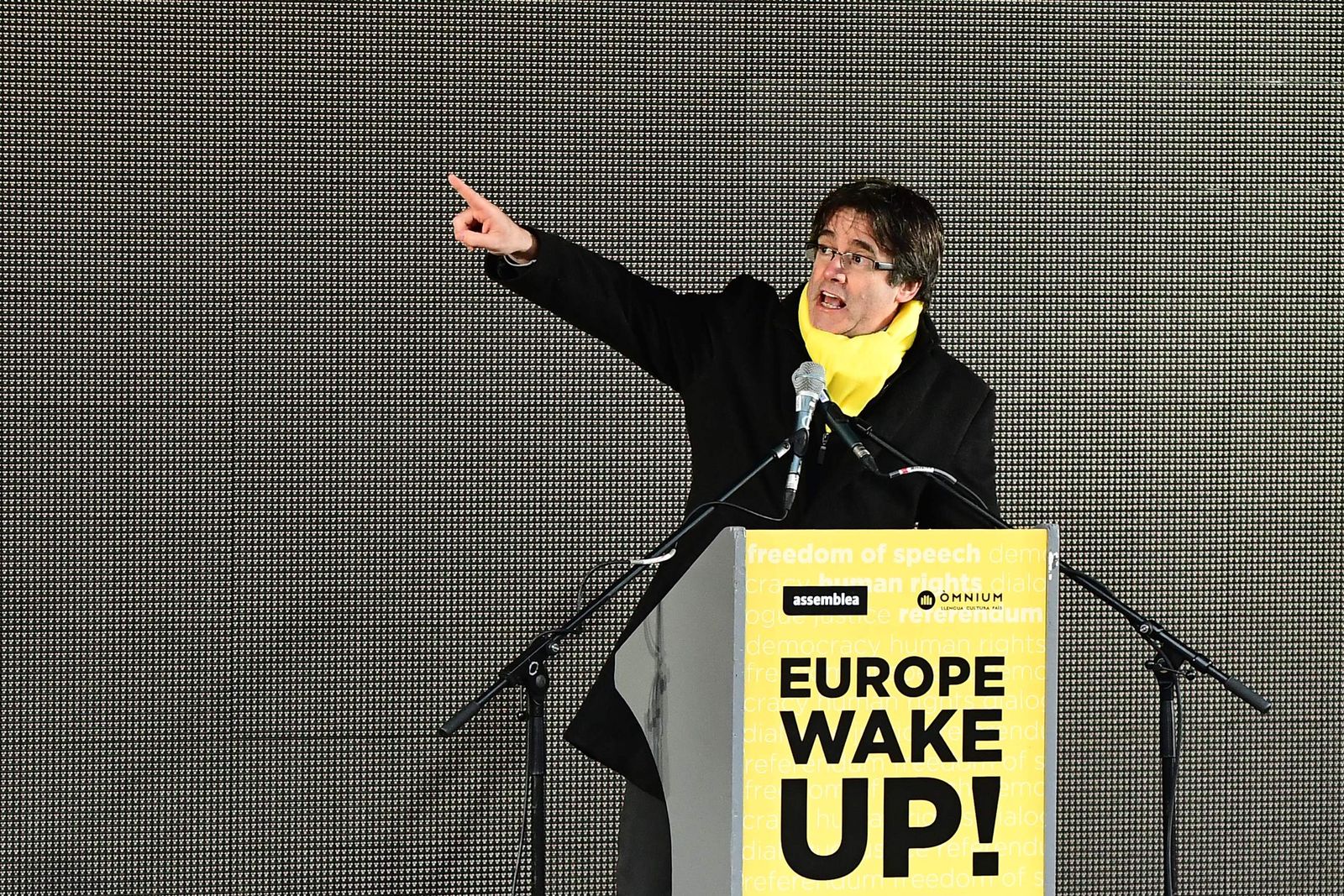 Carles Puigdemont during a protest in Brussels in December 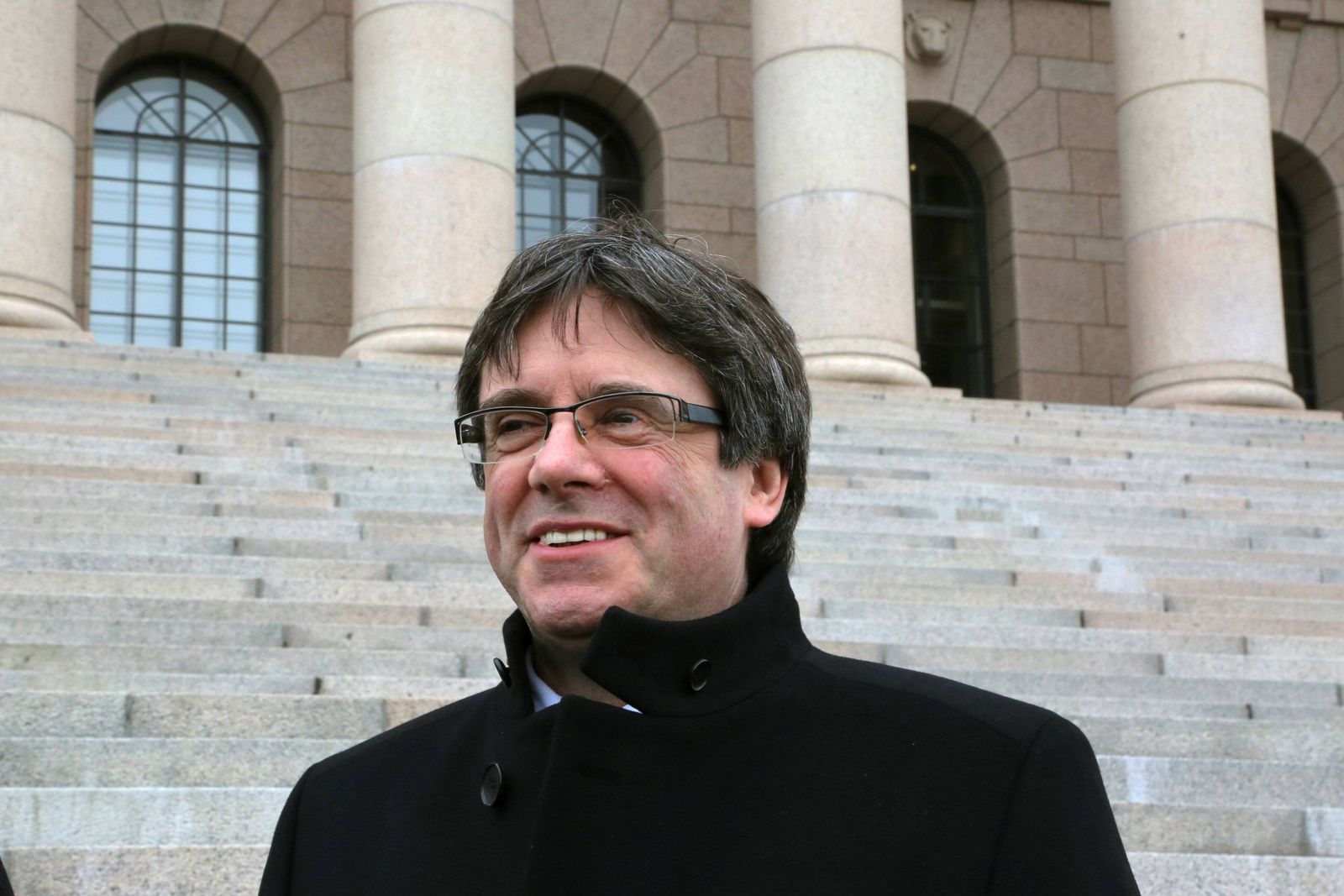 Puigdemont on March 22 in Helsinki, Finland