There was the spring of 2017, when he accused the German government of adopting Nazi methods. Or when he explained to "his" compatriots, Turkish-Germans, in the German election that they shouldn't vote for the center-right Christian Democrats (CDU), because they were "enemies of Turkey." Or when he stayed silent after the Turkish press depicted German Chancellor Angela Merkel with a Hitler moustache.

Now, members of the German government are describing another president's behavior as "outrageous" and "primitive" -- not Recep Tayyip Erdogan but Donald Trump, who picked a quarrel with Turkey and imposed duties and sanctions on the country, sending the Turkish lira into a tailspin.

Government officials argue that everyone knows the Turks don't allow themselves to be intimidated like that. Ultimately, Trump will fail to secure the release of the imprisoned American pastor Andrew Brunson, they argue, and he will instead poison relations between Turkey and the West.

Now, it's Trump of all people who is pushing Germany and Turkey back together.

The looming collapse of the Turkish economy is a genuine dilemma for the German government. It doesn't want the Turkish economy to fall deeper into crisis, no matter what. "If Turkey becomes unstable, we'll have a huge problem in Europe," claim sources close to Merkel. They are worried about potential consequences for the eurozone and the German economy, about the 3 million Turks living in Germany and about the possible unraveling of the deal with Ankara that is preventing more refugees from making their way to Europe.

If it becomes necessary to act, officials in the German government argue, Germany will be at the front of the line.

On the other hand, the German government has little inclination to help a man who only recently compared them to Nazis. Hardly anything would be less popular among the Germans than sending taxpayers' money to the autocrat in Ankara.

When Andrea Nahles, the head of the center-left Social Democrats (SPD), raised the possibility of German aid for Turkey, it was followed by a prompt denial from the government. German Finance Minister Olaf Scholz of the SPD also had little enthusiasm for the idea.

The fact of the matter is that many in Berlin believe Nahle's suggestion was premature, but not fundamentally incorrect. Government spokesperson Steffen Seibert also didn't broadly exclude the possibility of aid for Turkey. For the time being, everyone is pinning their hope in Turkey's "self-healing powers." But if they don't suffice, it seems clear that Berlin won't simply sit back and watch.

For now, German aid to Turkey has been restricted to rhetorical assistance. German politicians are outdoing one another in stressing Turkey's immense importance as a partner for Germany and Europe. Chancellor Angela Merkel also emphasized Germany's interest in a stable and "prosperous Turkey."

In Ankara, the government happily took note of Berlin's fawning words, which noticeably calmed the markets. "Merkel's words were worth gold to us," says one of Erdogan's advisers.

At the same time, the German government set in motion an unprecedented round of phone calls and visits. Finance Minister Olaf Scholz demonstratively invited his Turkish counterpart and Erdogan's son-in-law Berat Albayrak to Berlin. Even before President Erdogan embarks on his visit with full military honors to Berlin in four weeks, Foreign Minister Heiko Maas (SPD) will travel to Ankara. He will meet with his Turkish counterpart Melvüt Cavusoglu and Parliamentary President Binali Yildirim and possibly even Erdogan himself. Economics Minister Peter Altmaier (CDU) is planning a visit to Turkey a few weeks later.

The German government wants the softer new approach to Turkey to send a message -- to Donald Trump and the markets. But for Merkel, any German support for Erdogan puts her in an awkward position. Since the refugee deal, the chancellor has been accused of having allowed herself to be blackmailed by Erdogan. When she visited the Turkish president during her election campaign, widespread criticism followed. And when she didn't condemn Erdogan's charge against Jan Böhmermann -- a German comedian who wrote a purposely insulting poem in 2016 targeting the Turkish leader to test German censorship laws -- many people assumed it was a concession to the man keeping the refugees from entering Europe. It doesn't help the chancellor that voters with Merkel's CDU are particularly critical of Erdogan.

This makes Turkey even more satisfied with Merkel's handling of the crisis. Erdogan's adviser says the president feels validated in his assumption that, when in doubt, the Germans won't leave the Turks hanging. He is convinced that, given the millions of Syrian refugees his country has taken in, he can place pressure on Germany. "If Turkey sinks into chaos, it's not the U.S. that will suffer, but first and foremost Europe," says a Turkish government politician.

At the same time, Erdogan doesn't want to portray himself as a supplicant, making it unlikely he will publicly ask the German government for any financial aid. The symbolic support from Germany is, for now at least, more important to the Turkish leader.

Government experts believe financial aid for Ankara is theoretically possible, but not bilaterally and without conditions. The line right now goes that direct financial aid cannot and will not happen. "We have few tough instruments for helping Turkey," says one official who is involved. In the Finance Ministry, officials are also saying that the European safety net, the European Stability Mechanism, cannot be used to help the country because Turkey isn't a member of the eurozone.

In the coming talks with his Turkish counterpart Albayrak, Scholz wants to urge Turkey to seek assistance from the International Monetary Fund (IMF). People in the ministry argue this is the normal channel for dealing with the kinds of turbulence Turkey is currently experiencing.

People close to Erdogan are excluding the possibility that the president will ask the IMF for a bailout. Erdogan has repeatedly boasted of having revived the economy after the dire 2001 crisis and of making Turkey independent from the West. If he asks for help from the IMF as his predecessor did, it would be tantamount to an admission of failure. "Erdogan would be more willing to accept a national bankruptcy than to submit himself to the IMF," says a Turkish government politician.

That's why officials in Berlin are looking for other ways to help the Turkish economy. Finance Minister Scholz, for example, could imagine the Europeans adopting joint measures to spur investment in Turkey. Plenty of opportunities exist, especially in the tourism sector.

The summer 2017 decision to limit the state guarantees for exports to Turkey has been lifted, and the Foreign Ministry also recently downgraded warnings for people traveling to Turkey. The German government has also requested that the Turkish government convene a meeting of the German-Turkish Economic Commission, which was founded in 2013 but has never held a meeting.

Since economics is half psychology, the German government wants to do everything in its power to calm the financial markets. It is worried the stability of the eurozone might once again be jeopardized as a result of the Turkish economic crisis. For German banks, the lira's weakness doesn't pose a huge risk because they only have about 21 billion euros in outstanding loans to Turkish companies. But it is dangerous for Spanish financial institutions, which have lent 69 billion euros. The first euro crisis was caused by, among other things, bankrupt banks with bad loans on their books.

But the German government also wants something back in return for its support. It has communicated to Ankara in various ways that the seven Germans still being held in Turkey for political reasons, partly without charges, must be freed. The lifting of the ban on Turkish-German journalist Mesale Tolu leaving Turkey on Monday is being viewed as an early sign of compromise by the German government, and as an indication that further decisions in this vein can be expected in the near future. If that happens, German government sources say, it is also feasible that Germany would stop blocking negotiations in the EU for a customs union with Turkey.

It remains questionable whether Erdogan will be willing to make concessions under pressure. The president suspects that his power will erode if the economic situation further deteriorates. But he still doesn't have the will to raise interest rates or to reduce state expenditures, as most economists are suggesting. Erdogan wants to be able to boast of growth numbers in the regional elections in early 2019, and is blocking any reform that might curb growth for this reason. He believes he can sit out the crisis.

His people also make it clear that Erdogan will not back down in a fight with Trump. To release pastor Andrew Brunson, who has been in jail since 2016 because of purported links to the Kurdistan Workers' Party (PKK) and preacher Fetullah Gülen because of outside pressure would be a sign of weakness, which is unfathomable for the Turkish leader. As such, the Turkish government is lining up allies in Europe and Asia with the goal of isolating Trump in the conflict.

In this respect, Germany holds special importance for Turkey, and Erdogan is demonstratively seeking to close ranks with the German government. As a first step, he has instructed all his ministers to dial down their verbal attacks against Germany. "Erdogan is a pragmatist," says a Turkish government politician. "He knows that he can't go up against Europe and the U.S at the same time."

Finance Minister Scholz also believes the newfound proximity to Turkey is necessary for geopolitical reasons. He believes the Europeans need to show President Trump that they will not allow the U.S. to create disruptions in their own backyard without a fight. 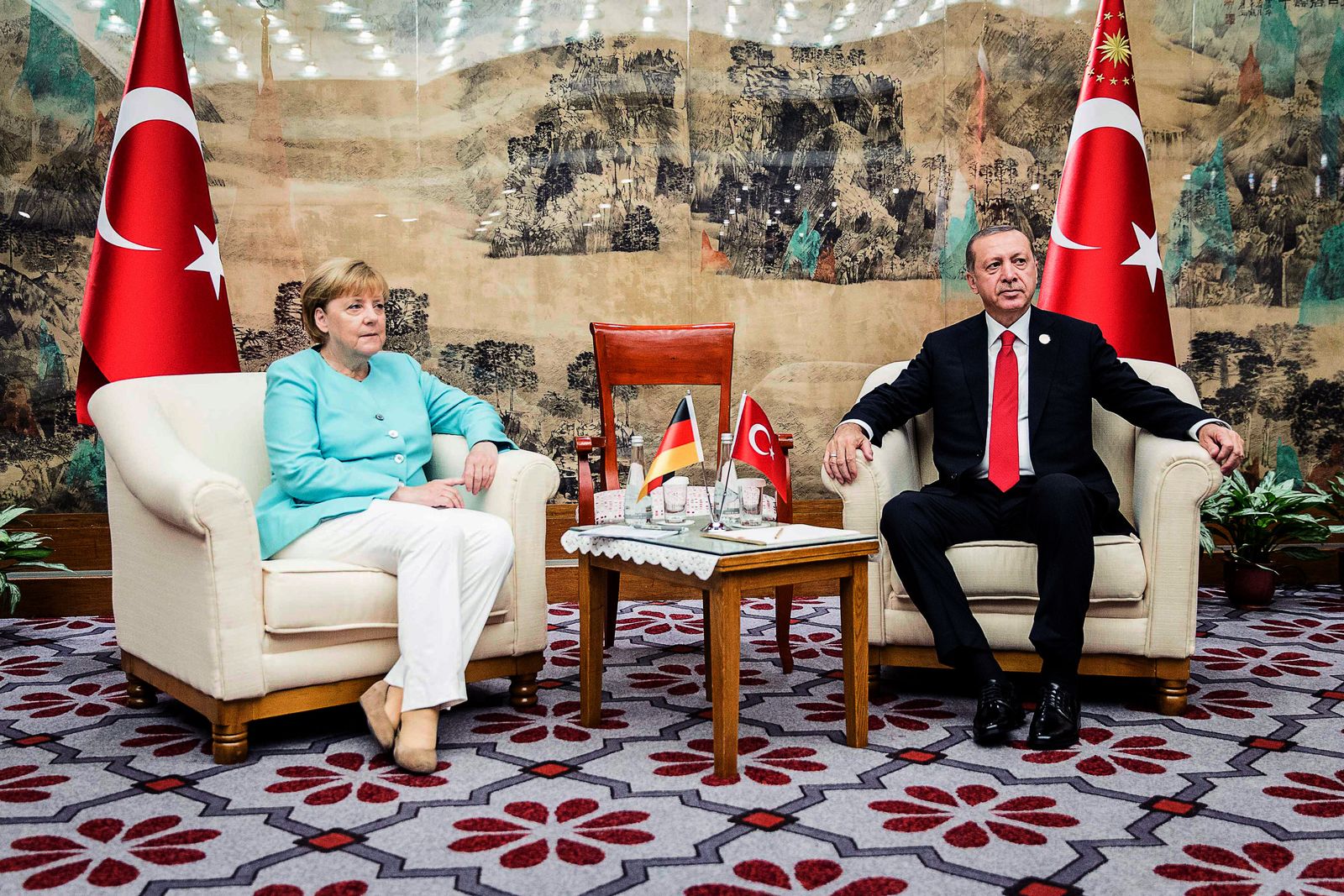 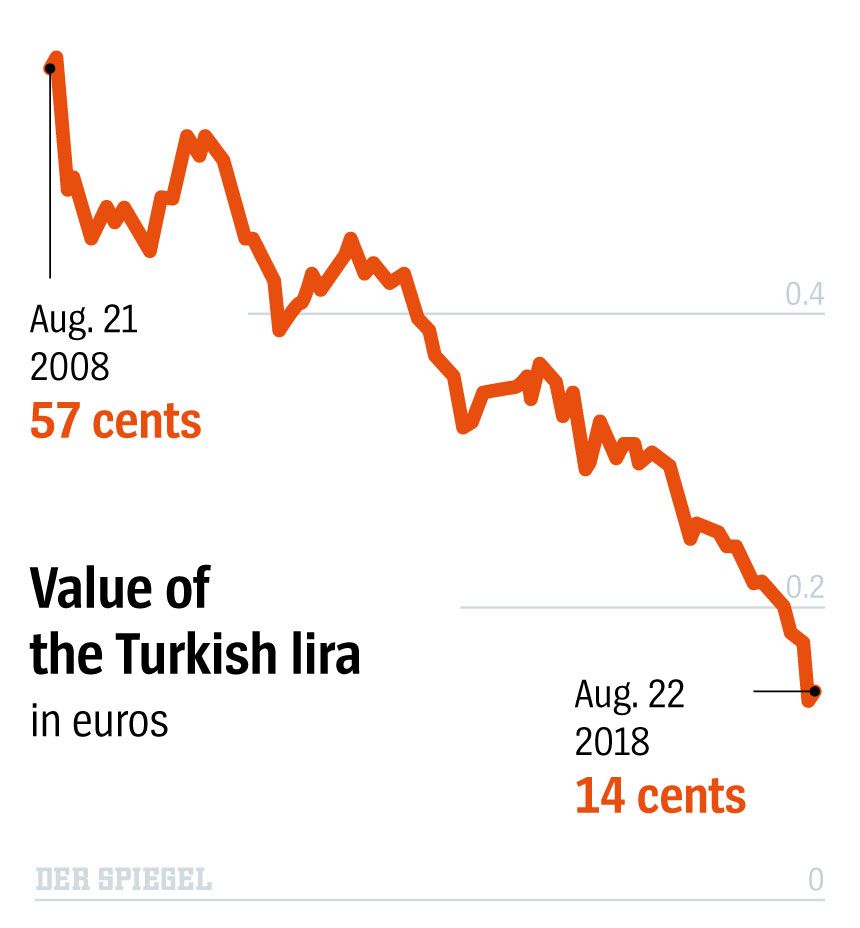