The German Foreign Ministry on Monday denied allegations that it was attempting to influence Britain's plans to commemorate the 2014 centenary of the outbreak of World War I.

A spokesman for the ministry confirmed reports that it had sent an envoy to London in early August to discuss the centenary ceremonies. But he added: "There was no intervention of any kind in how our friends and partners intend to shape their commemoration of World War I."

The Daily Telegraph reported on Sunday that the visit by Andreas Meitzner, a German diplomat tasked with coordinating European commemoration plans for the centenary, was prompted by German concerns that the ceremonies might have an excessively "declamatory tone," placing more emphasis on victory rather than reconciliation.

The Daily Mail even reported that the envoy had been sent to prevent WWI victory celebrations altogether.

The Foreign Ministry spokesman told SPIEGEL ONLINE that Meitzner had met his British counterpart Andrew Murrison to exchange ideas about the planned commemoration.

The Daily Telegraph reported that Norman Walter, the spokesman for the German embassy in London, had said the UK should place less emphasis on who caused the war, and focus instead on the subsequent achievements of the European Union in preserving peace. The embassy declined to give a comment to SPIEGEL ONLINE.

Perhaps unsurprisingly, there are major differences in the way Germany and Britain commemorate World War I.

For Germans, the memory is tainted not just by defeat and the chaos that followed, but by the crimes of World War II. The death in 2008 of Erich Kästner, the last veteran believed to have served in the German Imperial Army, was largely ignored in Germany. By contrast, when Harry Patch, the last British veteran to have fought in the trenches, died in 2009 at the age of 111, there was live TV coverage of his funeral in Wells Cathedral.

It was a similar story with the discovery in 2011 of the remains of 21 German soldiers in an underground shelter in Alsace. The news got little attention in Germany. Had those men been British, it would have dominated the front pages and TV documentaries would have traced their descendants.

Yet despite those differences, the German and British war graves commissions insisted on Monday that they're in total agreement about preparations for commemorating the centenary.

"We work very closely with the Germans, and we are on the same page in terms of what we want to achieve," the spokesman for the Commonwealth War Graves Commission, Peter Francis, told SPIEGEL ONLINE. "Not only do we want to commemorate what was and still is a deeply personal event, we also want to inform and educate our younger visitors about the realities of war."

Indeed, the respective graves commissions are putting their heads together to make sure that British and German graves across Europe are maintained to a similar standard. There will also be joint educational initiatives for younger visitors.

Fritz Kirchmeier, the spokesman of the Volksbund Deutsche Kriegsgräberfürsorge, the German War Graves Commission, said: "My general sense is that both Germany and the UK are placing a strong emphasis on Europe. Naturally, different nations have a different take on the war, but Britain is sensible enough not to conduct a full-blown victory ceremony." 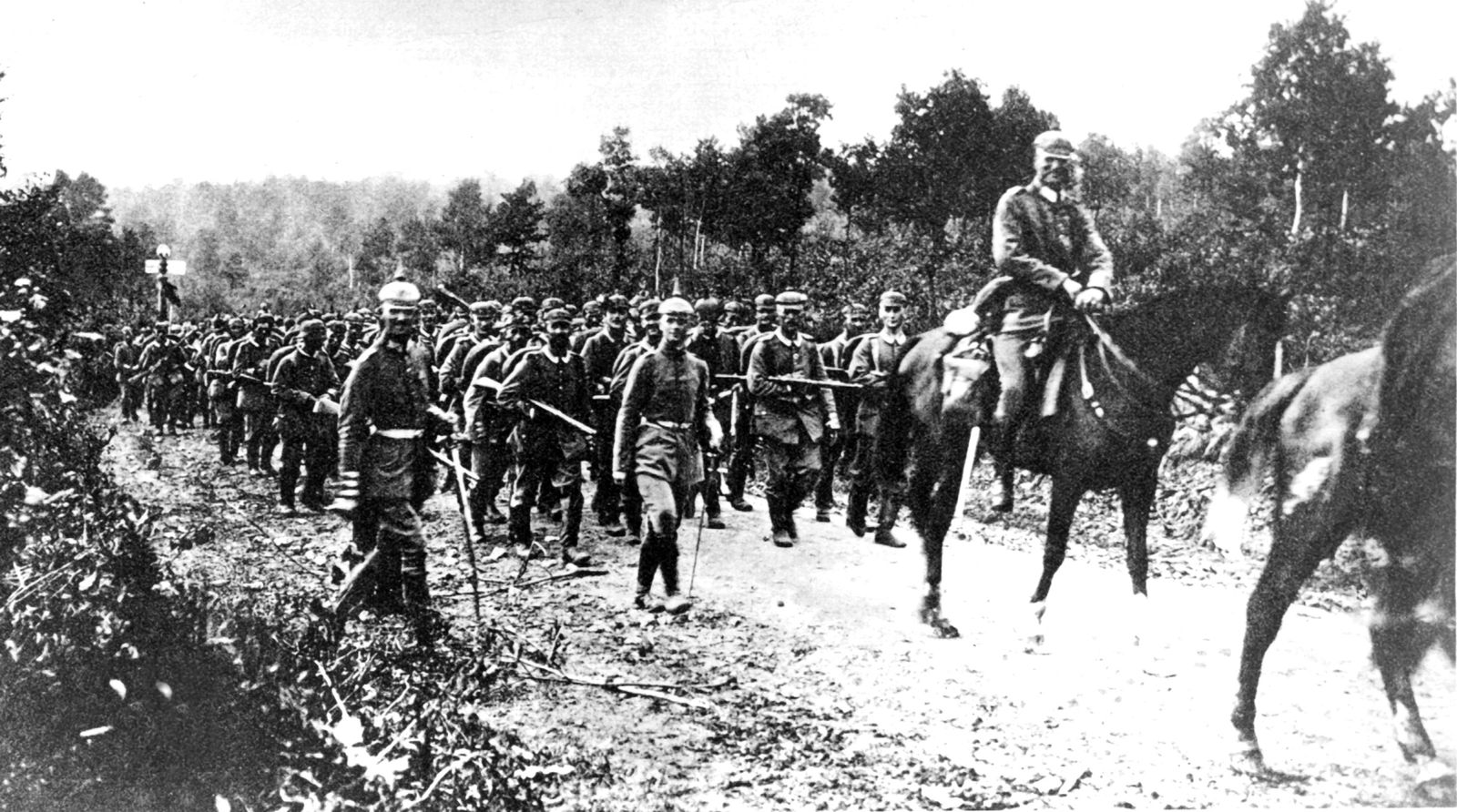 German troops advancing into France in August 1914. Germany says it isn't trying to influence the way Britain commemorates the event.