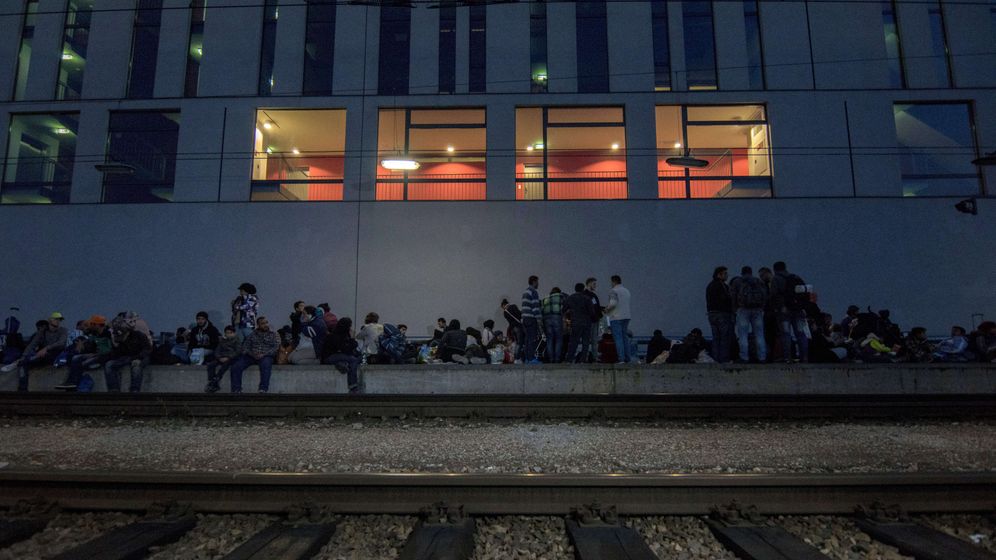 Evrim, a refugee from the ravaged Syrian city of Aleppo, has wrapped herself in a wool blanket, her red sweatshirt no longer offering sufficient protection against the cold. The young woman with dyed-blonde hair would rather spend the night in front of Vienna's Westbahnhof Station than sleep in an emergency shelter. She is planning on taking the very first train to Germany the next morning.

"We heard that Germany has closed the border," Evrim says. But she doesn't really want to believe it. She heard the news from Mohammed, who is also from Aleppo and is part of the group of 15 Kurds from Syria she is traveling with. The group coalesced on the refugee trail, which leads from Turkey across the Western Balkans to Hungary and beyond. Mohammed, for his part, heard the news from a British journalist who had interviewed the group in the early evening right after they crossed into Austria from Hungary. "Maybe he misunderstood (the journalist)," Evrim says.

But he wasn't mistaken. On Sunday evening, Germany introduced temporary border controls along its frontier with Austria in response to the massive numbers of refugees that have been making their way to Germany in recent weeks. Officials from Germany's 16 states sounded the alarm back on Thursday, warning that refugee hostels were full and that they could no longer process the huge numbers of newcomers.

The temporary border controls -- which could last as long as two weeks, according to Bavarian Interior Minister Joachim Herrmann, who spoke on public radio on Monday morning -- are intended to give Germany a chance to catch its breath while at the same time ratcheting up the pressure on other European Union member states to accept a quota system for the distribution of asylum recipients across the bloc. EU interior ministers are meeting on Monday to try to find a solution.

Graphic: The refugee route to Europe.

German Interior Minister Thomas de Maizière made the announcement on Sunday, soon after hundreds of federal police officers began making their way to Germany's border with Austria. In his statement, de Maizière said that the Dublin Regulations, which require that refugees register and remain in the country where they first set foot on EU territory, remain in effect -- even if Germany, along with Austria, Hungary and other member states, had largely ignored the requirement in recent weeks. "I demand that all European member states again adhere (to Dublin) in the future," the German interior minister said. Refugees, he added, "can't simply choose" in which country they want to apply for asylum.

To ensure that refugees don't merely change their route and find their way to Germany by way of the Czech Republic, border controls may also be introduced along that frontier as well. "The task is to prevent illegal border crossings," Saxony Interior Minister Markus Ulbig told public broadcaster MDR Info on Monday. "That means that controls may be introduced."

For the refugees, that means that Austria, suddenly, is no longer just a transit country. It could become their new home. But the 15 Syrian Kurds in front of the train station want to hear nothing of the sort. "We will wait as long as it takes for Germany to reopen its borders," says Evrim. "We are Kurds. We are stubborn."

That seems to be the viewpoint of most migrants. Around 10,000 of them arrived in Austria from Hungary on Sunday, but only a few dozen of them applied for asylum in the country. The overwhelming majority want to move on. But why to Germany?

"My husband is there," says a young woman from the Kurdish town of Afrin in Syria. She has lived for the past two years in Turkey, like all of those in the group. Her husband left a year ago and received asylum in Germany. But because he only was able to get an appointment at the German Embassy in Ankara in 2016 to apply to bring his family to Germany as well, his wife decided to make the trip herself, with the help of migrant smugglers.

Sixteen-year-old Mohammed, who is traveling with his sister, says: "My brother lives there." His brother, Mohammed adds, has been in Germany for the last four years and is going to university there. He advised his siblings to join him. "We were in Istanbul for the last two years," Mohammed says. "But we don't have a future there. I won't be able to go to university in Turkey. It's hard enough just to go to school."

There are at least 1.7 million Syrians currently living in Turkey, but according to Turkish law, they do not have refugee status. Rather, they are seen merely as guests who enjoy temporary protection -- and they are not allowed to work. Furthermore, more than 80 percent of them do not live inside a refugee camp, meaning that they receive no support. Their situation is becoming increasingly difficult. It is a similar plight to the one facing Syrians who have found refuge in Jordan and Lebanon.

Evrim is the only one in the group who does not have family in Germany. "Germany can't just close itself off," she says. "Where should we go? What should I do in Austria? I don't know anything about Austria. We are foreign there. I want to go to Germany. There are so many Syrians in Germany. We aren't foreigners there." The fact that there may not even be a cot available to her in Munich doesn't dissuade her. "Thus far on this trip, nothing has been easy or free."

The meeting of European Union interior ministers on Monday will go a long way toward determining whether EU member states are willing to accept a quota system, such that Germany does not continue to bear the brunt of the influx. De Maizière on Sunday sketched out a scenario involving the establishment of reception/registration centers in Hungary, Italy and Greece, from which refugees could then be distributed across the bloc. Eastern European countries, however, have thus far resisted the proposal.

On Monday, Bavarian Governor Horst Seehofer, who has been extremely critical of Chancellor Angela Merkel's handling of the refugee influx and who invited Hungarian Prime Minister Viktor Orbán to visit Bavaria to discuss the crisis, insisted that the reintroduction of border controls was necessary to "bring order back to the entire system." Speaking prior to a meeting of senior party leaders in Munich, Seehofer said: "Every logical person" saw that the situation couldn't continue as it had in recent days. But, he added: "We remain a humane and helping state."

Meanwhile, German Transportation Minister Alexander Dobrindt said that refugees will still be brought into Germany using special trains. "There will certainly be some (trains) arriving in the coming days and weeks," he said.

Evrim, meanwhile, is making plans to continue her journey. She has heard that Austrian trains were heading to towns near the border with Germany. She didn't know if they would take refugees along, but she wants to try. "I have been on the road for 17 days. Ten of those days I spent in Greece. If we can somehow get close to the border, then we'll just continue on foot to Germany." 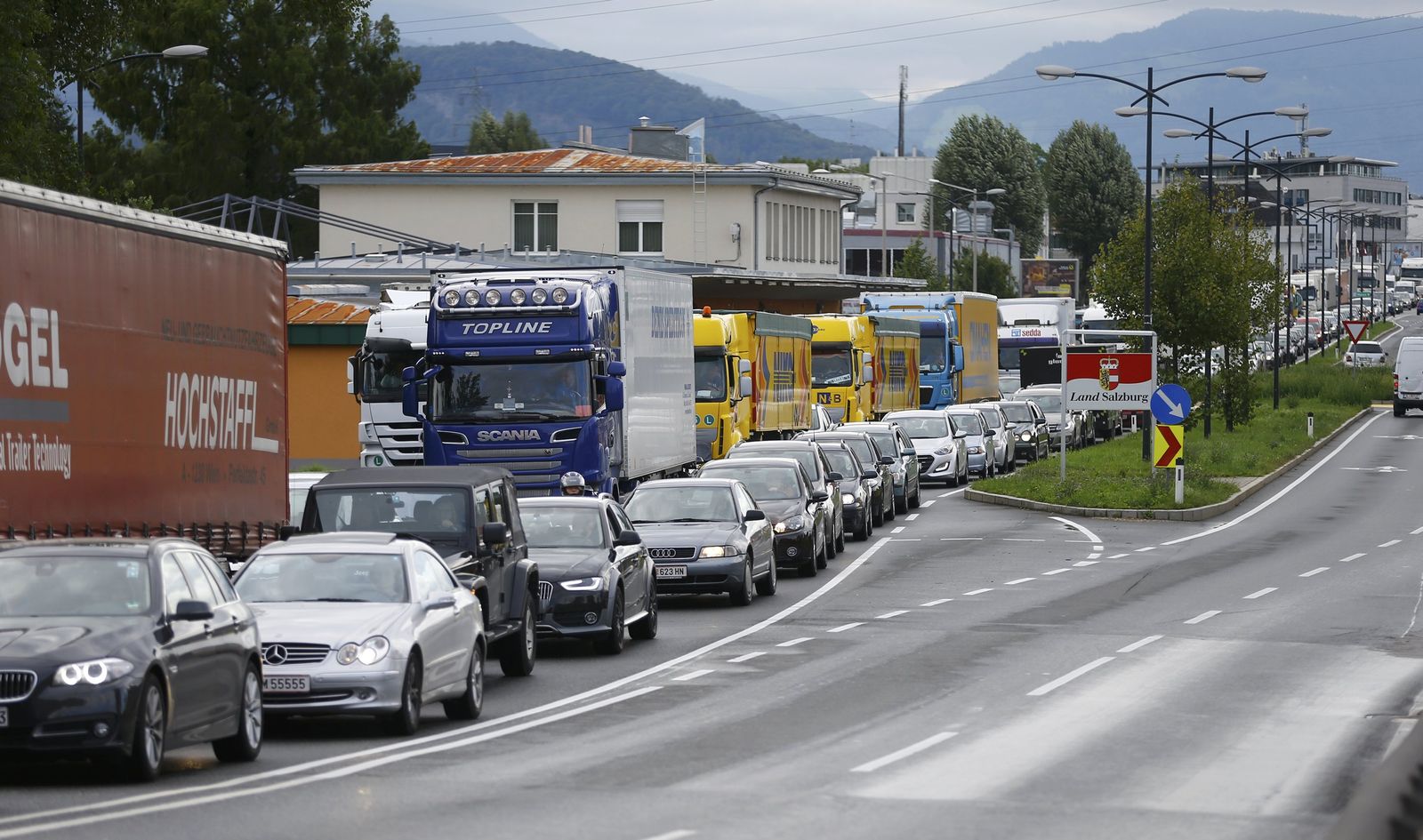 The introduction of border controls on Sunday between Germany and Austria resulted in long traffic jams between Salzburg and Munich. Train travel was likewise temporarily suspended, but resumed again on Monday morning. 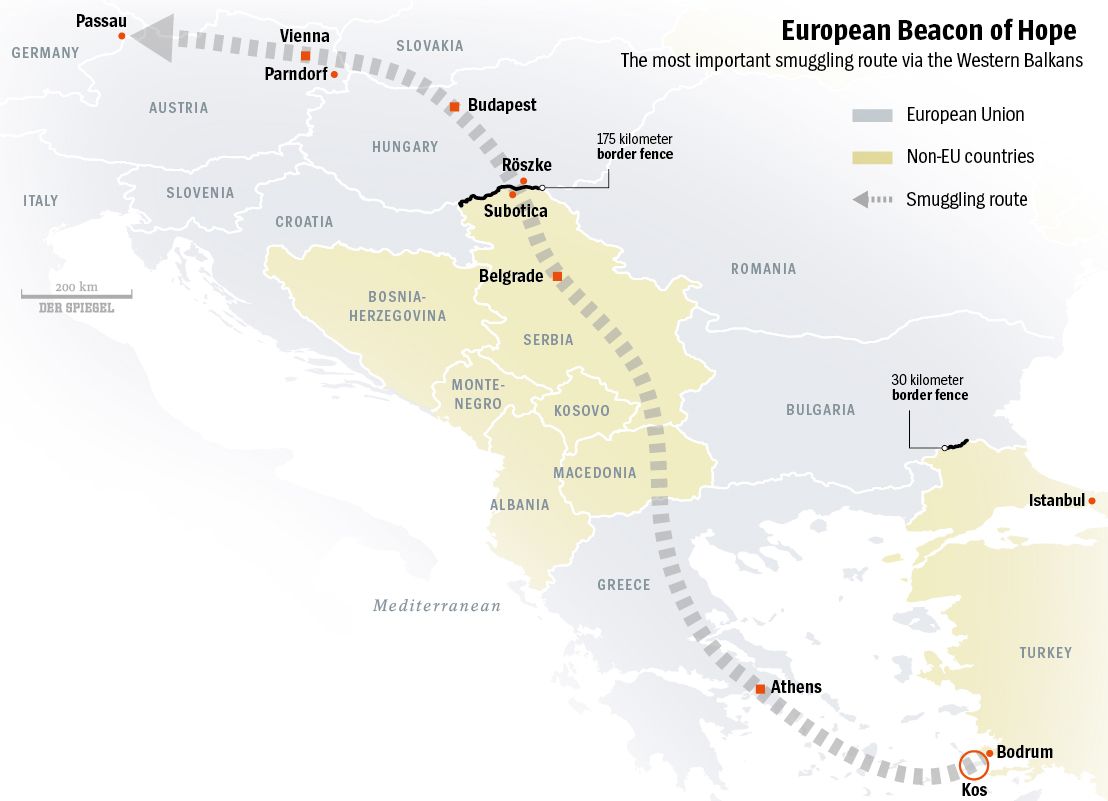 Graphic: The refugee route to Europe.