Moria. It’s such a small word. But those five letters have the power to destroy the self-image we have of ourselves as Europeans. Or, to be more precise, the self-image of those Europeans who can identify with the fundamental values of the European Union. This includes, first and foremost, respect for human rights.

When the fired raged on Wednesday in the refugee camp on the Greek island of Lesbos, online videos showed people panicking, but also some singing "Bye-bye Moria!” Let’s hope the latter are right. The conditions at the camp are so shameful that it needs to disappear. It’s not just that the asylum-seekers are miserable at the camp: Moria is a declaration of moral bankruptcy. Also for the European Union.

How is the EU now supposed to appear as an authority on the international stage? How is a German or French foreign minister going to be able to criticize the Chinese government for its disregard for human rights? Or, for that matter, the Russians, Saudis or Iranians?

Any despot could rightly respond: Perhaps you should worry more about the fact that you have children living in barracks without running water or electricity.

If it wants to play a guiding role on the international stage, Europe cannot squander its credibility on moral issues. In military terms, the EU is a dwarf compared to China and the United States. And economically, both powers can easily compete with Europe. The EU's only distinguishing feature is its "soft power.” Political scientists describe this as a form of power wielded by a country that isn’t based on military or economic strength, but on its ability to exert influence through exemplary function and reliability.

The U.S. had this soft power, flanked by the hard power of its army. Now the U.S.’ reputation as a soft power has taken a beating as a result of, among other things, the torture scandal at the Abu Ghraib prison camp, where U.S. guards tortured inmates to death, and the treatment of prisoners at Guantanamo. And, of course, due to Donald Trump, who is the source of one scandal after the other in his country.

Although evacuating the migrants from Lesbos would be a compelling first step, that will not be enough to ensure that the EU remains a serious voice on human rights internationally. The German government cannot hide behind a call for a "European solution” as long as it is clear that many governments have no interest in accepting refugees. Berlin should set an example by taking in at least a few thousand of the migrants stranded on Lesbos.

Furthermore, the EU needs to finally adopt a coherent asylum and migration policy. Because as long as there are wars and poverty, people will continue trying to get into Europe.

Europe cannot squander its credibility on moral issues if it wants to play a guiding role on the international stage.

To be sure, managing immigration is complex, and the interests of the 27 EU member states are in part diametrically opposed. And Europeans don't always take it well when the continent offers refugees from Syria or Afghanistan a new home.

But there are solutions that migration experts have long recommended: They champion the establishment of humane reception centers at Europe’s external borders with good health-care provisions, not massive cesspools like Moria. Asylum applications could be reviewed there within a matter of weeks. It would also be worth trying to negotiate further, EU-wide repatriation agreements with African countries for rejected asylum-seekers to make even clearer that those who don’t have the right to stay must leave. Those who are granted asylum would however be assigned to a country within the EU. Given that some countries will refuse to take in refugees, a system of "flexible solidarity” will inevitably have to apply. But that also means that those countries that refuse to do so would also have to make a financial contribution for providing assistance to refugees. Many politicians are already demanding that now.

In the coming weeks, European Commission President Ursula von der Leyen is planning to finally present a proposal for a European asylum system. Few believe she will succeed with the initiative. The EU isn’t known for its solidarity-based solutions on this issue. One thing is certain though: The system cannot remain as inhumane as it is now. 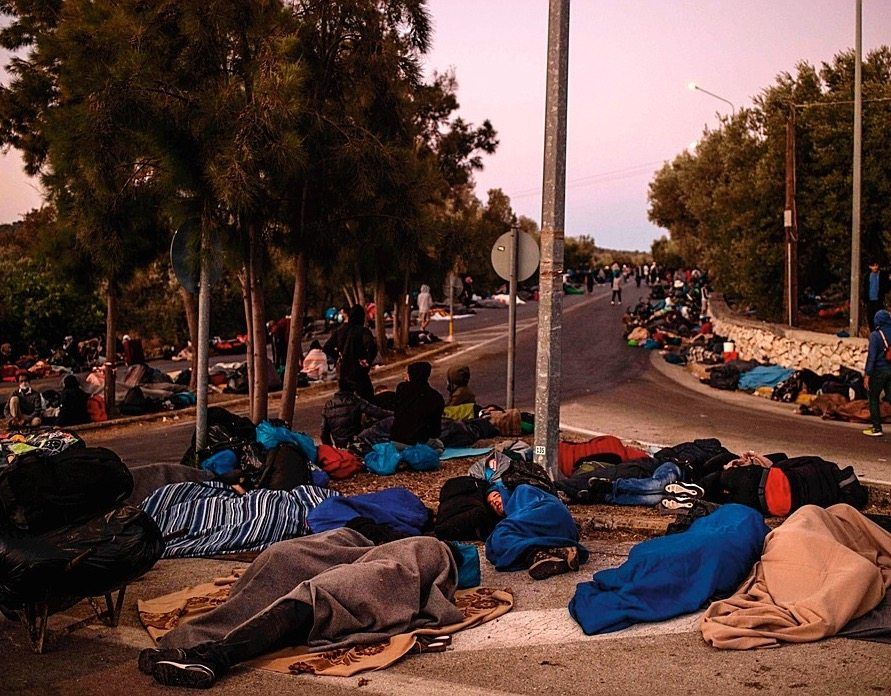 An inhumane system: Homeless refugees from Camp Moria sleep next to a road on the Greek island of Lesbos