As Heiko Maas disembarks from the German military plane at the Goma Airport in the Democratic Republic of Congo, he is greeted by two men in white. One of the men sprays the German foreign minister's hands with a disinfectant, while the other holds a thermometer to his temple.

Every air traveler must undergo the infrared fever test. It's part of an effort by the Congolese authorities to assert control over a virus that has been threatening the region for more than a year: Ebola.

The first epidemic of the fatal fever between late 2013 and 2016 cost more than 11,000 people in West Africa their lives. In Congo, around 2,200 people have died since summer 2018. The World Health Organization (WHO) declared the outbreak a "public health emergency of international concern."

Unlike in West Africa, the epidemic hasn't spread regionally so far. But the danger has not yet been averted. And since many Germans are helping out in the areas of infection, protecting them -- and, should they themselves become infected, treating them -- has become a matter of great urgency for the German government. Thanks to the initiative of the German Foreign Ministry, German citizens who have contracted the dangerous disease could soon be flown home for treatment for the first time.

In With Malaria, out With Ebola

There are now two Ebola vaccines, but comprehensive immunization in Congo still remains elusive. One reason is that some infected areas are under rebel control. One WHO representative in Goma told Foreign Minister Maas that hygiene standards in many Congolese hospitals were catastrophic. "You go in with malaria and come out with Ebola," he said.

To this day, two-thirds of sick people still die from the disease there. The danger of the disease spreading on both a national and regional level is "very high," according to the situation reports published every week by the Foreign Ministry's health service.

In order to guarantee German doctors and other aid workers the best possible treatment in an emergency, the government in Berlin would like to fly them back to Germany. But there's one problem: "The federal government currently has no means of evacuating German citizens suffering from Ebola to Germany while maintaining German treatment and occupational safety standards," says Gerhard Boecken, 60, a tropical medicine specialist who has headed the Foreign Ministry's health service since 2015.

Prior to his current job, Boecken spent eight years working in Africa. Even as a medical officer for the German navy, he pushed for a transport solution for infected soldiers.

During the first major Ebola epidemic in West Africa in 2014, the government hastily commissioned Germany's flagship airline, Lufthansa, to convert an Airbus A340 for this purpose. The plane was named after the late German physician and Nobel laureate Robert Koch. In about three months, the eponymous German medical research institute, Berlin's Charité hospital and Lufthansa, along with the German Foreign Ministry, transformed the large-capacity Airbus aircraft into a flying, isolated intensive care unit.

But plane got decommissioned almost a year later because it proved to be too expensive. Maintenance alone amounted to around 1 million euros ($1.1 million) a month, partly because a Lufthansa crew had to be on standby around the clock for emergencies.

Since then, the Foreign Ministry has been working on a plan for how to provide German aid workers with maximum protection at a reasonable cost. One idea is a mobile, modular evacuation unit.

Frank Hartmann is the Foreign Ministry's crisis management officer. The 54-year-old and his staff offer around-the-clock support to German citizens all over the world, whether they're affected by natural disasters or political earthquakes or kidnappings.

The crisis reaction center is located in the basement of the Foreign Ministry, behind vault doors 50 centimeters (19.7 inches) thick. (The building in central Berlin housed Germany's central bank from 1876 to 1945.) Inside, the walls are adorned with maps of crisis areas, one of which shows the area affected by Ebola in Central Africa.

"The medical workers on the ground have been providing support for over a year despite extremely difficult circumstances," Hartmann says. "If they fall ill, it is crucial they be evacuated from the crisis area so that they may receive the best possible treatment."

Hartmann has a copy of the project sketch for the "infection transport module" on his desk. The system consists of three containers: The first, marked in red, is the treatment module. In it, patients would receive intensive medical care on the flight back to Germany. This is connected to a second container, marked in yellow. This is the airlock where doctors and medical workers would don protective suits before entering the treatment module, and it's where they would be decontaminated after leaving the red area. A third module, marked in green, would serve as a preparation and storage room.

A modular solution has many advantages, Hartmann explains. Four meters long and 2.4 meters wide, the containers would fit into any standard cargo plane. Smaller aircraft could also be used, such as for landing at airports with shorter runways or on sand, allowing patients to be picked up directly from remote areas. This would save precious time; it doesn't take long for Ebola to destroy large parts of the body. Patients can die in as little as 10 days.

Another advantage of the modules is that upon arrival in Germany, patients would not have to be transferred to special ambulances, which can be cumbersome and would increase the risk of infection. The red module could be loaded directly from a plane's cargo bay onto a normal tractor-trailer and then taken to a special isolation station. This way, the patient would not have to leave the container from the point of pickup to reaching a special isolation station in Germany.

Nevertheless, transporting a patient with Ebola still poses enormous challenges for doctors, says Alexander Uhrig of Berlin's Charite university hospital. The 52-year-old runs the intensive care unit and the special isolation ward of the hospital's infectiology and pneumonology division. In 2014, he advised the missions flown by the "Robert Koch."

"Because the disease advances extremely quickly, the patient's life depends on us being able to treat them on the plane," Uhrig says. "Otherwise the patient would already be suffering from multiple organ failure by the time they reach Germany."

Given that the virus doesn't spread through the air, the risk of infection is generally lower than with influenza viruses. Ebola is transmitted through blood and other bodily fluids such as sweat, saliva, stool, urine or vomit from sick or deceased people.

"For medical personnel, the highest level of caution is therefore required at even a normal special isolation ward," says Uhrig. "In an aircraft that often makes unpredictable movements, the risk and strain on personnel increase. One has to be careful when using sharp objects such as syringes or scissors."

Doctors and nurses wear respirator suits with air filters and communicate via two-way radios. Because the oxygen content and humidity in an airplane's pressurized cabin at an altitude of 10,000 meters is lower than on the ground, they can't work for longer than three or four hours. On longer flights, more shift changes are required than in a conventional isolation station.

The most dangerous thing that could happen is a sudden drop in pressure. Inside the treatment tents onboard the "Robert Koch," there was negative pressure.

"At the time, we were in uncharted territory, technically speaking," says Peter Atzpodien, a senior account manager at Lufthansa Technik who is responsible for the company's government relations. "We had to find a solution to prevent the tents from tearing if the pressure dropped. If that happened, contaminated material would spread throughout the plane and and put everyone onboard in great danger."

The solution was an airbag that took up almost half of the aircraft. "If the pressure were to drop, the contaminated air would escape there," Atzpodien explains. The solution was one-of-a-kind. Lufthansa has applied for a patent.

The evacuation module has not yet been commissioned. For a long time, it was unclear which German ministry would be responsible for the project. The Health Ministry or the Defense Ministry made sense, but neither showed much interest. Officials from the Foreign Ministry, however, found a receptive audience at the Chancellery, particularly with chief of staff Helge Braun, who is also happens to be a doctor.

It's an unusual project for the Foreign Ministry, but Boecken and Hartmann are proud of it. There's also the fact that since the end of November, secure funding has finally been in sight. In November, a working group at the European Council, the body that represents the leaders of the member states, decided the European Union needed an evacuation unit like the one the Germans designed and agreed to finance it. The project is estimated to cost 10 million euros for the development and construction of the container modules.

The European Commission has put the project out to tender and Germany has made a bid on it. Considering its experience with the "Robert Koch" and the cooperation between the Foreign Ministry, Lufthansa Technik and Charité, chances are good that Berlin will be awarded the contract. From that point on, it would probably take another 18 months before the modular system would be ready to use.

But what happens if the Ebola crisis is solved by then?

There are other infectious diseases, Hartmann says. Take the lung disease SARS, for instance, which spread around the globe within a few weeks back at the turn of the millennium. Others, such as lassa fever, the pneumonic plague and the Marburg virus are also far from being eradicated. "With the mobile evacuation containers," Hartmann says, "we Europeans would be prepared for any eventuality." 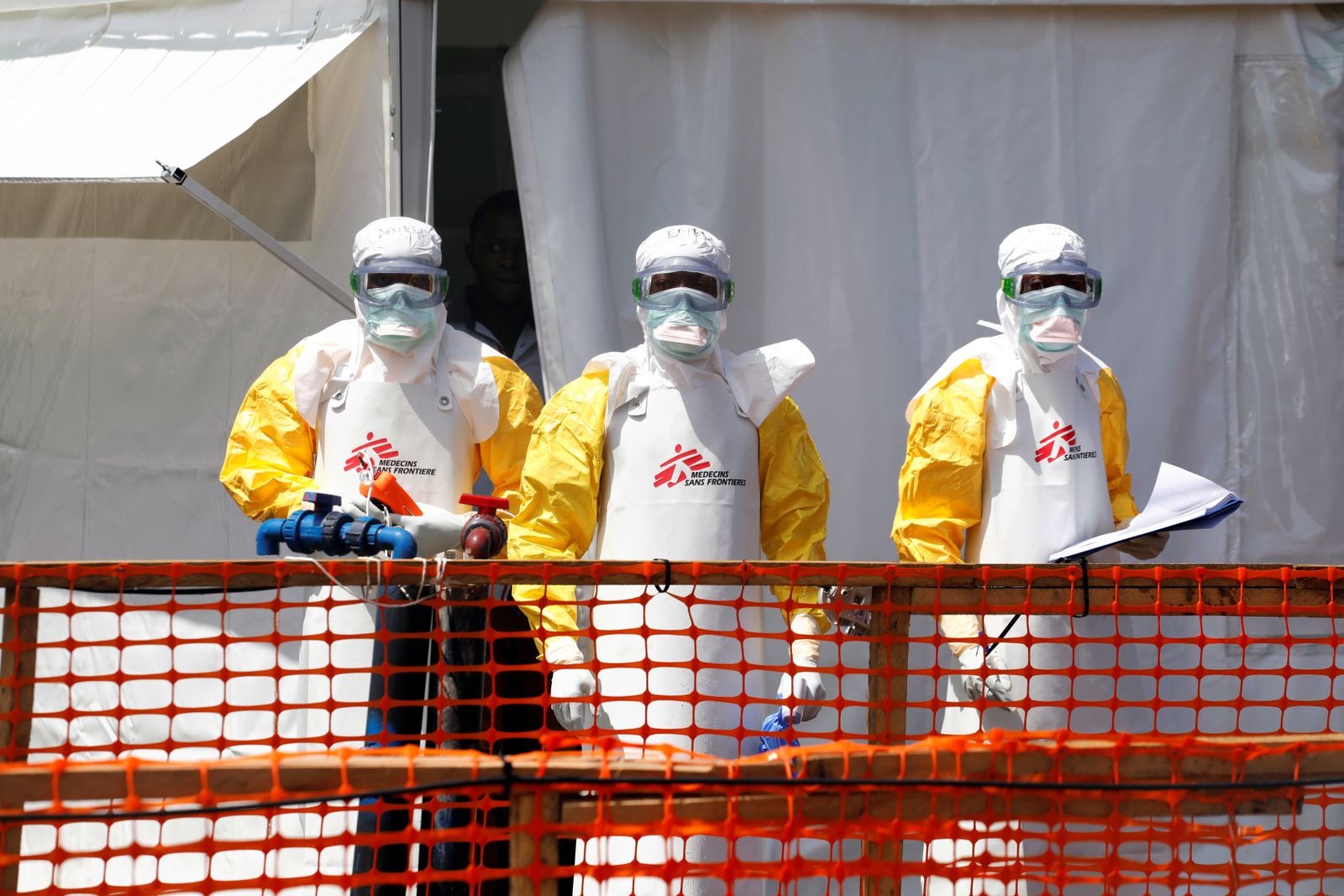