SPIEGEL ONLINE: Mr. Özdemir, you have been in Greece for talks for the past few days. Do you have the feeling that you, as a German, are still welcome there?

Özdemir: The Greeks know that there is more to Germany than just the Chancellery -- where for a long time people have been sticking their heads in the sand, hoping that the euro crisis will somehow solve itself. People are aware that we Greens also exist, in the opposition, and that we have a clear European vision. They also know that even within the ruling conservative Christian Democrats (CDU) there are isolated voices of reason, such as German Finance Minister Wolfgang Schäuble and certain CDU representatives in the European Parliament.

SPIEGEL ONLINE: You have just met with Greek Prime Minister Giorgios Papandreou. How did he see the situation in the run-up to the European Union special summit on Thursday?

Özdemir: He is the prime minister of a country in which the value-added tax rate has been increased by four percentage points to 23 percent, the public investment budget was reduced by 20 percent in 2010 and salaries have been slashed by between 20 and 40 percent. Besides, the devil is in the details: We are -- rightly -- calling for the Greek state to privatize its assets, but they are being sold off at bargain-basement prices. There is the danger that we will see a similar situation to what we had in Russia under Boris Yeltsin (ed's note: when a small group of oligarchs acquired state assets very cheaply during a period of rapid privatization). No one can have an interest in that happening. This means that Papandreou, to a certain extent, has his back to the wall, because the country has largely exhausted its possibilities for consolidating its finances. If Thursday's summit fails to produce a long-term solution that also serves to calm the markets, then there is the danger that the Greek government will be at its wits' end when it comes to the search for solutions.

SPIEGEL ONLINE: What impression did you have of Papandreou? Is he struggling to keep going, just like his country?

Özdemir: No, Papandreou and his people are taking very resolute action. I would also like to correct another widely held perception: Athens is not only pushing through its reforms because the German government was so stubborn -- that's nonsense. No, the Greek government is taking it very seriously, because the reforms are in the interest of the vast majority of Greeks -- to make sure that in the future they will live in a country where corruption is tackled and the state provides services rather than putting the brakes on the economy. But it's also clear that if a country is going to tighten its belt as much as Greece is currently doing, then it also needs the hope that things will improve. Simply implementing reform after reform without anything getting better afterwards won't work in the long term.

SPIEGEL ONLINE: What does this mean for the prime minister?

Özdemir: The crucial thing for Papandreou is that he comes home from the EU summit in Brussels with a sensible, long-term vision for his country. It's not enough just to save Greece for the next two or three months, only for it to then have to beg for the next round of aid.

SPIEGEL ONLINE: Did Papandreou tell you what he expects from Chancellor Angela Merkel?

Özdemir: I cannot play the role of messenger. He will have to tell the chancellor that himself. One thing is clear: Angela Merkel's friends in the conservative party in Greece (ed's note: New Democracy) will not do a better job of fixing the situation, should Papandreou fail. The chancellor knows that. That's why it is absolutely in her interests to strengthen the Greek prime minister's position. The markets will only calm down if the chancellor and her fellow European leaders send a strong signal that the EU will not allow anyone to fall. Part of that involves using images to send a signal in the media. For example, it would have been good if the German chancellor had paid a visit to Athens to show her solidarity, as US Secretary of State Hillary Clinton did.

SPIEGEL ONLINE: What specifically do you want to see from the chancellor at the EU summit?

Özdemir: I hope that she will finally push for determined action -- and put politicians back in the driver's seat. It is not enough to always be playing catch-up. The crisis is coming closer to home -- just look at Italy. You don't need to be a prophet to know how the financial markets will react if leaders at this summit only postpone finding a solution to the problem once again. The rating agencies are downgrading (euro-zone members) not based on facts but because the EU members -- particularly the euro-zone countries -- lack the competence to solve the problem. In my view, that means that Greece needs a debt restructuring.

SPIEGEL ONLINE: A haircut, in other words?

Özdemir: Yes, a haircut, whereby old bonds would be exchanged for new ones with longer maturities and lower interest rates. Greece's creditors would be well advised to take advantage of such an offer. In conjunction with that, there needs to be a stimulus plan to stabilize the Greek economy. Then Greece would have a chance to start paying off its debts and get back on its own two feet. The potential is there: When I look out the window, I see crumbling windmills. The country is lacking modern wind turbines as well as photovoltaic systems and modern, efficient networks to transport electricity. After all, there is an abundance of wind and sun in Greece.

SPIEGEL ONLINE: People in Greece are asking for help from the EU. What can Europe expect from them in return?

Özdemir: Greece will have to make sure that the reforms are not just passed, but also carefully implemented. That's not easy in a country where the bloated public authorities have focused on their own needs in the past. Greece also needs support for this new start. If necessary, one very pragmatic measure could be to send the country more experts from other EU countries, including Germany.

SPIEGEL ONLINE: The opposition center-left Social Democrats (SPD) in Berlin recently announced their proposal to combat the euro crisis. But we haven't heard much from your party on this issue. Are the Greens still recovering from their internal fighting over Merkel's plan for a transition to renewable energy?

Özdemir: You are forgetting that we Greens already discussed and decided on a comprehensive plan to rescue Greece and stabilize the euro zone at our special party congress in mid-June.

SPIEGEL ONLINE: But hardly anyone noticed that, because everyone was focusing on what the Green Party's position on Merkel's energy strategy would be, which was also being decided at that congress.

Özdemir: At the beginning of the Greek debt crisis in 2010, we took a responsible position and voted in favor of the first rescue package in the German parliament -- unlike the SPD, which abstained from the vote. If the Social Democrats are now showing greater interest in Europe once again, I can only welcome that.

SPIEGEL ONLINE: The Greens have already taken on the SPD -- your preferred coalition partner on the national level -- in a number of policy areas. Are you also now muscling in on their position as a pro-European party?

Özdemir: European policy has long been a crucial area for the Greens. In certain respects, we have adopted the legacy of (former German Chancellor Helmut) Kohl's European policy. If the SPD also wants to be part of that, then so much the better. Europe is such an important issue that we have to find cross-party solutions. Ms. Merkel is actually in a very comfortable position -- she is facing opposition parties which are pro-European, unlike in many EU countries. The question is whether she has the courage to set the correct course. Otherwise we will gladly take care of it after the next national elections in 2013. 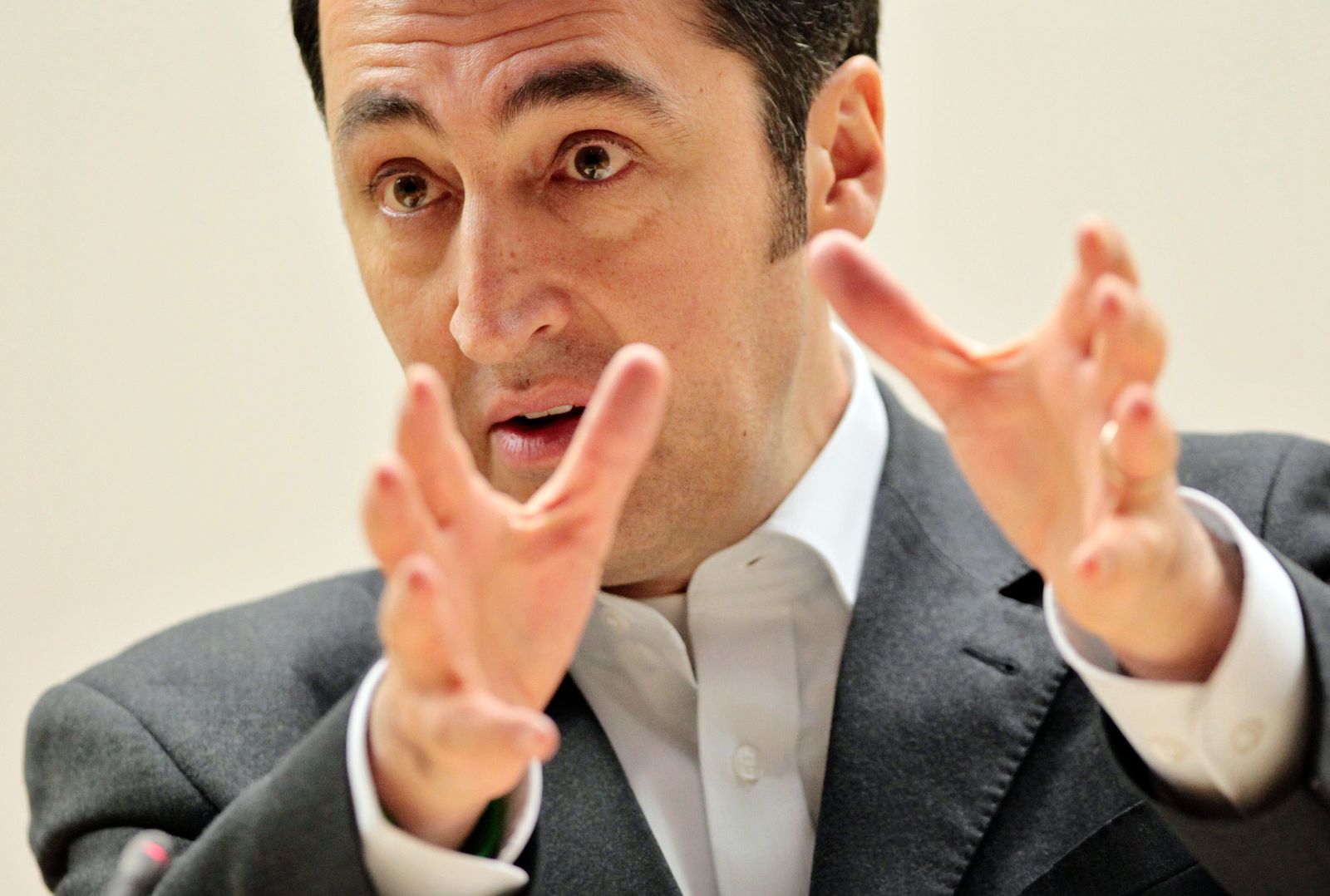 Green Party co-leader Cem Özdemir: "It's not enough just to save Greece for the next two or three months."