Some of the guests attending a ball organized by German companies high above the rooftops of Moscow brought along machine guns and pistols. It was a James Bond-themed evening and the weapons in question were, of course, toys. The party also featured a scantily clad woman slithering in a giant martini glass.

With champagne and cigars, the owners of mid-sized companies toasted the dazzling profits they earn in Russia. At the time, everything all was still rosy in the world of German-Russian business relations. The event took place two Saturdays ago.

Just days later, there is no longer much reason to celebrate. Relations between the West and Russia have sunk to the lowest levels seen since the Cold War because of the Ukraine crisis. The leaders in Moscow are preparing to take over the Crimean Peninsula -- a development that came an important step closer to reality on Sunday after 97 percent of those who turned out for a referendum voted in favor of joining the Russian Federation. The West is responding to the vote by imposing new sanctions on Russia, including the freezing of bank accounts and travel restrictions.

Germany has taken a leadership role in those efforts -- a role that Berlin has sought to claim for itself since the early days of the unrest in Kiev. At the beginning of the year, Foreign Minister Frank-Walter Steinmeier pledged that Germany would become more active in its foreign policy, and the current initiative is one manifestation of that aspiration.

But it is also becoming clear that those ambitions come with a price tag. Despite pressure from many European Union member states and the US, Steinmeier and Chancellor Angela Merkel initially managed to prevent swifter sanctions. They wanted to attempt to resolve the Crimean crisis through talks. The strategy ultimately failed because of Putin's intransigence.

Hitting Putin Where it Hurts

At a summit meeting the Thursday before last, EU leaders had already prepared for that potential outcome. Both the Americans and the Europeans have ruled out the possibility of a military response and instead want to strike Putin where he is most vulnerable: Russia's economic dependency on the West. They want to show the Russian president that the economic damage caused by sanctions will outweigh any regional political advantage won through his actions.

The main role here also continues to lie with Germany. The reason is simple: The country has very close business relations with Russia and has the greatest capacity to exert pressure. Still, German businesses would also be vulnerable were Russia to take retaliatory measures. Economic warfare could prove expensive for Germany. And this puts Merkel in a difficult situation since she may be forced to push through political measures that harm her country's business interests. Now that it has made a claim to leadership, Berlin can't simply retract it.

The sanctions the EU imposed against Russia on Monday in response to Sunday's Crimea referendum remain moderate. The plan involves freezing bank accounts and issuing travel bans against 21 Russian and Crimean politicians. If Putin continues to escalate the situation, however, more decisive action could follow.

In an address before parliament on Thursday, Merkel warned Russian leaders against destabilizing the situation in eastern Ukraine, also home to a large Russian-speaking population. She has threatened economic sanctions if this happens. "We will all be prepared and determined if they are unavoidable," she said. They are words she can no longer back away from.

The consequences would be serious -- for both sides. Last year, Germany and Russia had trade in goods of close to €77 billion ($107 billion). Russia primarily supplies petroleum and natural gas to Germany. Germany, on the other hand, exports mechanical engineering products, medicines, trains and automobiles to Russia. More than 6,000 German companies are registered in Russia and, together, they have invested €20 billion in recent years. German chemical giant BASF has holdings in Siberian gas fields and Russian gas monopoly Gazprom obtained natural gas storage facilities in the state of Lower Saxony in exchange. Without special chemicals from Germany, it would be difficult for Russia to refine its crude oil. It would be a shattering blow to supplies for Putin's massive country if Merkel were to turn the screws on Germany-Russian economic relations.

At the same time, Germany's business community would also have to assume some severe losses. All it takes is a mere sampling of businesses to see just how deep economic ties go between Berlin and Moscow.

Joe Kaeser, the recently appointed CEO of the multinational engineering firm Siemens traveled to Russia three times within his first 100 days in the position to arrange further investments. And building materials manufacturer Knauf alone employs more than 5,000 people in its Russian plants. All of that could now be at stake.

Indeed, even though serious economic sanctions have yet to be applied, the mere threat that they might has been felt. German retailer Metro wanted to take its Russian subsidiary public this year, but the plan is now imperiled. Volkswagen also wants to invest a further €1.2 billion in the expansion of its Russian plants. It is now uncertain whether this will happen. Last Friday, Germany's state-owned KfW development bank had planned to sign a contract together with Russia's government-held VEB bank for a €900 million investment initiative on behalf of mid-sized companies, but the German side cancelled the event at the last minute.

Will Russia Get Kicked Out of the G-8?

The next step could be Russia's ouster from the G-8, the group of the world's most powerful industrialized nations. The group's next summit is scheduled for June in Sochi. The first rounds of talks are already taking place between the so-called sherpa negotiators, but without the participation of representatives of the host country. Indeed, a new issue is pushing its way to the top of the G-8's agenda: The impact sanctions against Russia could have on the global economy. The British government has proposed that the seven remaining members instead hold a summit in London without Russia. Other participants welcomed the suggestion.

If Putin doesn't relent, Berlin is also considering cancelling planned German-Russian Government Consultations scheduled in Leipzig during April. At most, a "small, frosty format" would be conceivable, government sources told SPIEGEL. "Nothing else would make any sense given the current situation."

It is unlikely that such punitive measures would go unanswered by Russia; Putin has not been shy about threatening retaliation. A senator with his United Russia party is now calling for the expropriation of foreign companies doing business in the country. Moscow could respond by freezing bank accounts held in Russian banks as well as seizing assets.

But how high could the price get for the Germans if an economic war ensues and escalates? Corporate representatives and lobbyists are already busy drafting horror scenarios. They claim energy supplies could be at risk and that upwards of 300,000 jobs could be threatened. "I am very worried that we are going to unleash a downward spiral of sanctions and counter-sanctions that don't help anyone," said Eckhard Cordes, chairman of the Committee on Eastern European Economic Relations, an organization representing German business interests in the east. Cordes has called for greater understanding of Putin's position. "Many mistakes have been made in the relationship between Russia and the West, and those mistakes have not only been made by the Russian side," he said. Klaus Mangold, the chairman of the supervisory board of Rothschild Deutschland and Cordes' predecessor on the Eastern Europe Committee also opposes taking punitive measures against Moscow. "It would be a mistake if the West were to spark a new level of escalation following the Crimea referendum," he said. "Sanctions are the wrong approach."

So far, the government in Berlin hasn't taken much notice of voices of protest in the business community. "The Russian economy would be far more vulnerable to sanctions than German businesses," said one high-ranking government ministry official in Berlin. Nor do officials in Berlin believe that Russia would suspend its delivery of natural gas. "The Russians are dependent on income from the gas," one member of Merkel's cabinet told SPIEGEL. Besides, after a historically mild winter, Germany's natural gas storage facilities are well filled, meaning that the country's dependency on Russia is currently less than it might have been.

The German government is nevertheless hoping to prevent an economic war. This approach is also prudent out of domestic political considerations. A survey conducted by German pollster Forsa found that two-thirds of all Germans reject sanctions against Russia relating to the Crimean crisis. This helps to explain why both Merkel and Steinmeier want the conditions under which the third level of sanctions are implemented to remain as flexible as possible.

So at what point would the West accuse Moscow of destabilizing eastern Ukraine? It's a question that EU leaders will ultimately have to answer.

It's also an issue in which the fronts haven't been clearly drawn, as indicated by public statements made by EU leaders. Members of the German government are keen to point out that many Eastern European politicians speak in far less radical terms behind closed doors than they do when addressing their citizens. It makes sense, too. Countries like Estonia, Latvia and Lithuania purchase almost all their natural gas from Russia, and pressure from Putin could have a far greater impact on places like the Baltic states than on Germany.

In Berlin, all officials can do is guess at just how far Putin might be willing to go. Under the more optimistic assessment, the Russian president might offer a diplomatic olive branch following the annexation of Crimea to prevent a further escalation. However, high-ranking diplomats believe it is just as conceivable that Moscow might attempt to destabilize other regions like the Baltics or the Caucuses by using economic pressure or the presence of strong Russian minorities in countries in those places. It's a scenario for which the West still has no answer. 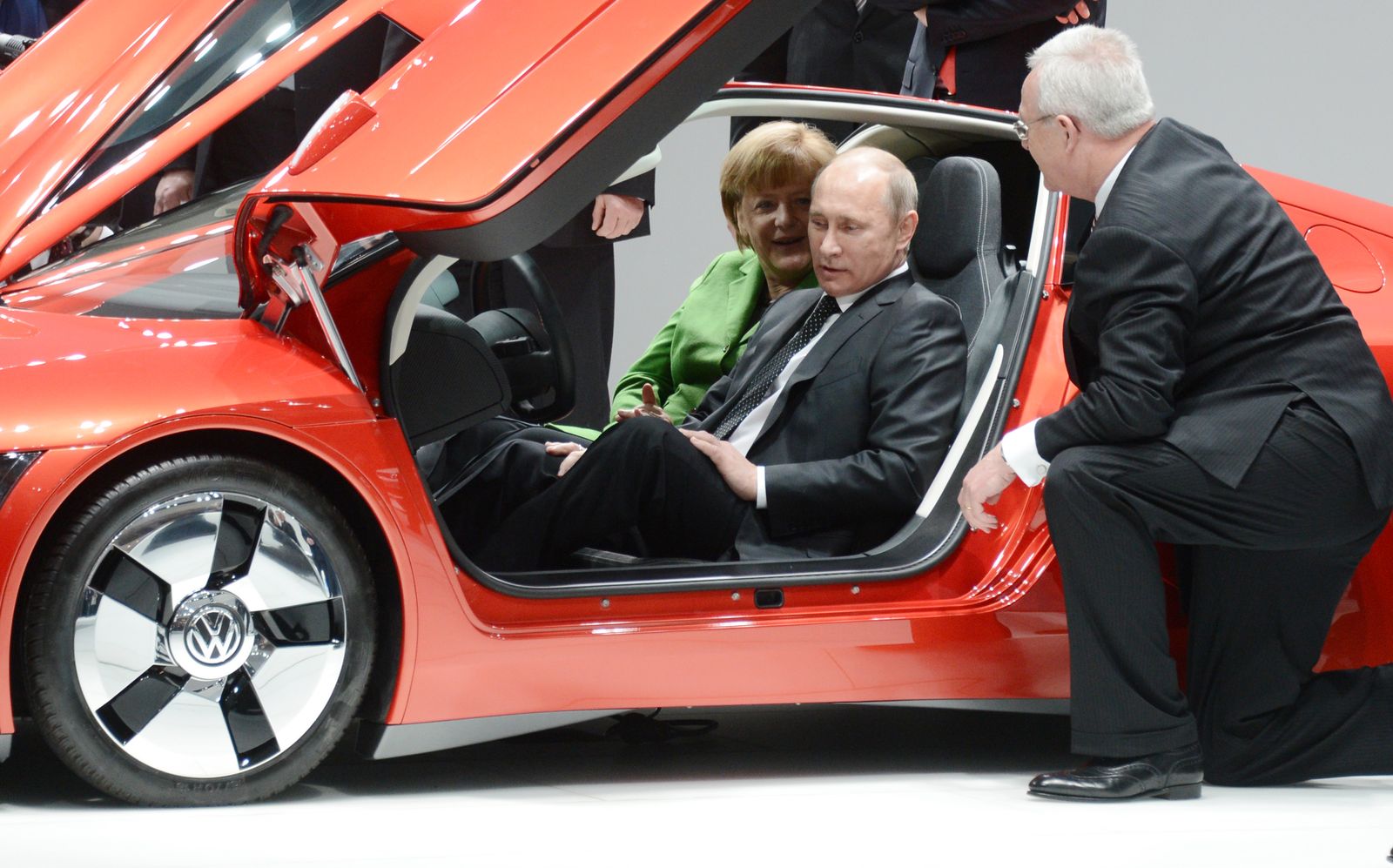 Angela Merkel and Russian President Vladimir Putin at the Hanover Trade Fair on April 8. The chancellor may be forced to make sanctions decisions that could negatively effect German businesses.