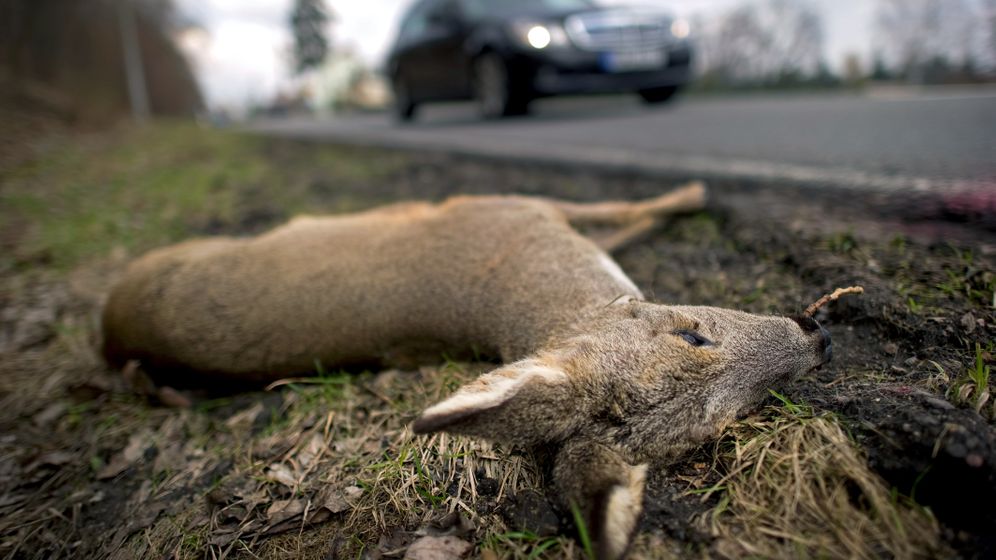 Bertram is dead. The roe buck was hit by a car on the L 95, a regional road near Willstätt in the southwestern state of Baden-Württemberg. The same thing happened to fellow deer Charlotte and Norbert. In the space of 14 months, Jutta, a doe, crossed the heavily traveled L 85, near the town of Bühl, more than 1,000 times -- accident-free. But then she too was hit.

Falko Brieger and Max Kröschel, two forest managers from the city of Freiburg, have affixed bright yellow GPS receivers to 45 deer. Once a week, the scientists drive from the Baden-Württemberg Forestry Testing and Research Institute to their test regions and read the movement data from the GPS collars. They want to know how often animals like Bertram, Norbert, Charlotte and Jutta head towards the road. What is their range? How often do they cross the road? And how -- and this is the most important question for the researchers -- can they be prevented from running blindly onto county, regional and federal roadways?

A car smashes into a wild animal on a German road over one million times a year. Collisions with foxes, badgers and rabbits rarely cause significant harm, at least to drivers and passengers. But collisions with deer and wild boar or, as was the case on Berlin's Ring Road last September, with a stately elk, can kill drivers.

There were approximately 200,000 accidents involving collisions with wild animals in 2012. They claimed 20 lives, seriously injured 615 people and caused about half a billion euros in insurance losses. According to horrific statistics compiled by hunters, about 20 percent of the wildlife killed throughout Germany each year is so-called roadkill, dispatched by the radiator of a speeding car instead of a hunter's gun.

In some regions, such as the heavily forested Waldeck-Frankenberg administrative district in the western state of Hesse, surprise encounters between wildlife and vehicles already account for a third of all traffic accidents. When an animal steps onto the roadway in the dark, drivers often have little time to apply the brakes. "It stood there as if it had just been beamed down," recalls Werner Hankel, a businessman who killed a deer with his Audi one night on the B 252, a federal road between the towns of Twiste and Berndorf. The accident caused €5,000 ($6,500) in damage to his car.

Although some animals initially survive a crash, they often sustain serious injuries. When it happens at night in his district, forest ranger Gerhard Thomas receives a call from the police. Then Thomas, a hunter from Kleve in the Lower Rhine region, hitches a trailer to his car and drives to the accident site. "The worst thing is the curious onlookers," says Thomas, "the 'friends of Bambi' who want to take a deer with an open fracture to the vet." Forest rangers and tenant hunters -- hunters who have had a hunting license for at least three years -- are required to shoot seriously injured wildlife.

This is one of the reasons hunters are especially keen to test methods of driving wildlife away from the side of the road. Over a million reflectors have been attached to black-and-white reflector posts throughout the country by hunters. When the light from a car's headlights hits the disks, they emit a bluish beam along the edge of the roadway -- in essence, a fence made of light that's designed to make animals hesitate before crossing the road.

In other locations, hunters spray expanding foam -- infused with the odors of lynx, wolves, bears and human beings -- onto trees and stakes on the roadside. These "perfumed fences" are also meant to induce animals into thinking twice before running into a deadly encounter.

One problem with these light and odor barriers: They have been used for decades, and yet the number of wildlife collisions still hasn't declined. "We only want to use measures that have proven to be effective," says Alfred Overberg of the road construction authority in the western state of North Rhine-Westphalia. He also fears that the reflectors, for example, could become detached from the posts in a collision and pose a threat to drivers.

So-called green bridges at some wildlife crossings are intended to make it easier for animals to safely cross major roads. Another seemingly effective measure: New systems that use infrared cameras to monitor the roadside and activate flashing road signs when an animal is approaching the asphalt. Measures like these, however, are far too costly to be installed on a large scale.

Although some carmakers have begun installing new safety packages in their vehicles, few drivers will be able to afford them. Volvo and BMW have designed their cars to detect, at a distance of about 100 meters (328 feet), wildlife on a collision course with the vehicle. Some BMW models come with a special headlight that flashes at an approaching animal. If the driver doesn't brake, a warning tone sounds. The "animal recognition" option costs about €2,000.

Two major research projects are currently underway to determine whether the most common prevention methods are effective. Falko Brieger and his fellow Freiburg forest managers are testing wildlife warning reflectors in the Baden-Württemberg region of Hegau and on the upper Rhine plain. The GPS collars are a critical part of the experiment, because, in the past, experts merely compared the numbers of wildlife accidents before and after a measure's implementation. Now, for the first time, they are studying the actual animals to determine whether they hesitate before stepping onto roads.

The researchers spent a year observing the collared deer before the luminous blue disks were installed. "We want to see whether the animals' crossing behavior changes as a result of the reflectors, so that wildlife accidents can be reduced," Brieger explains. The project will continue until 2014.

Christian Trothe of the Institute of Wildlife Biology in Göttingen, in central Germany, is studying scent fences and reflectors on 25 test routes in the northern state of Schleswig-Holstein. The project partners include the German Automobile Association (ADAC) and the German Hunters' Association (DJV).

"The measures work wonderfully on some stretches of road, but not at all on others," Trothe concludes. Now the forestry scientist wants to find out what the segments of road that have high accident counts -- despite reflectors and odor-emitting foam -- have in common. He hopes "it will enable us to provide individual recommendations for each district."

Hunters to the Rescue?

Meanwhile, hunters with the Environmental Hunting Association (ÖJV) would rather solve the problem with their weapons. "Most tenant hunters want a lot of game, so that there is enough there when they happen to have time to go hunting," says ÖJV Chairwoman Elisabeth Emmert. "In hunting grounds like those, there are too many animals." Emmert points out that there is a forested area in the northern part of the western state of Rhineland-Palatinate where an above-average number of deer are shot to protect young trees from being gnawed. "The number of wildlife accidents dropped to almost zero," says the hunter.

"If a hunting ground along the side of a road is attractive, it'll always be popular, even if there are fewer animals there," argues Torsten Reinwald of the DJV. "The main cause of wildlife accidents is the high volume of traffic."

But, says researcher Trothe, "shooting two deer and scraping 20 off the road isn't a very good record." When hunters tell him about the many animal collisions in their hunting grounds, he says that he often thinks to himself: "Then go ahead and shoot something!" 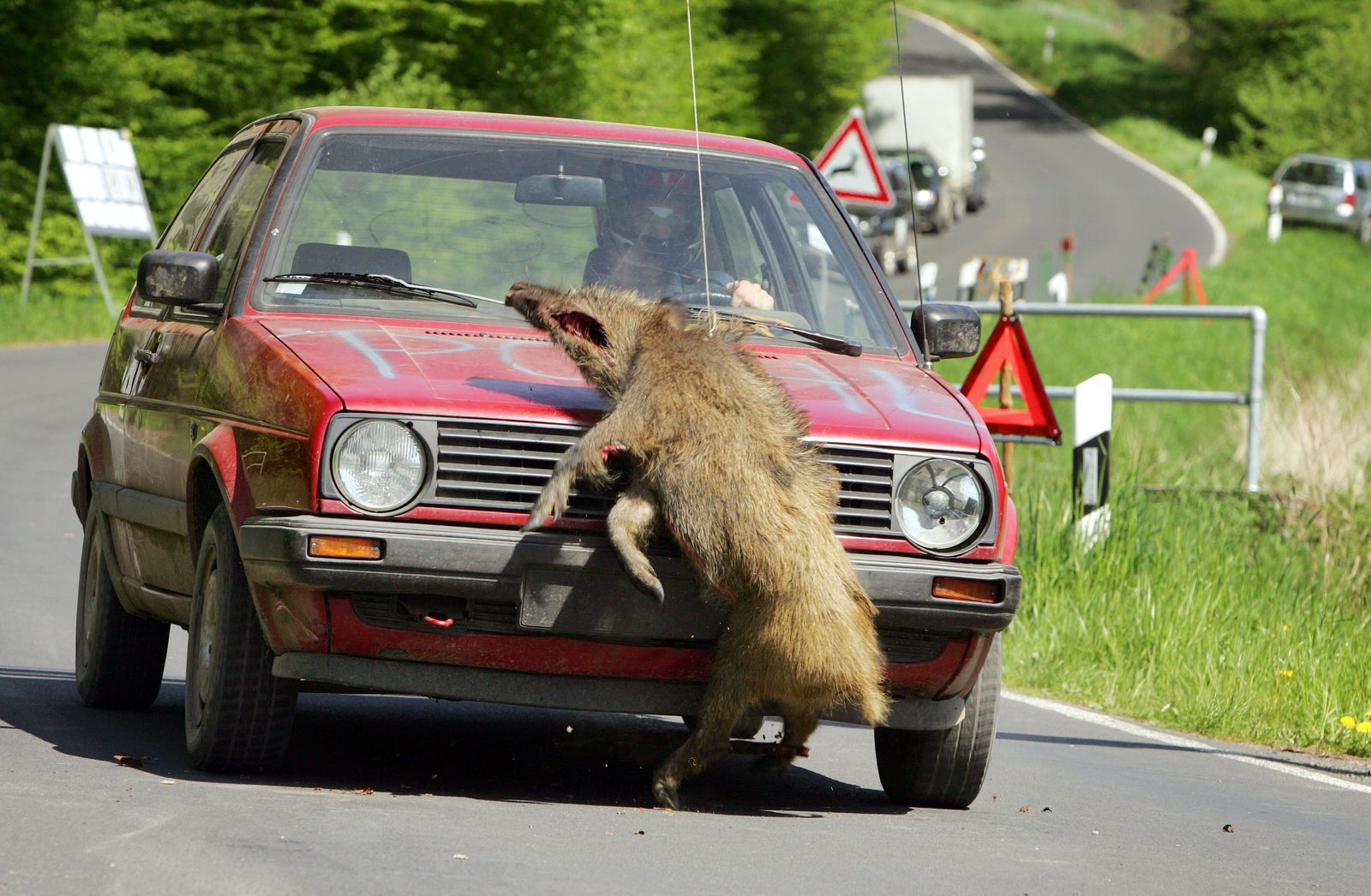 A test driver practices in a simulated encounter with a wild boar. Although some carmakers have begun installing new safety packages in their vehicles, few drivers will be able to afford them.