It's not easy to agitate Germany's usually serene Foreign Minister Heiko Maas, but it happened last Wednesday afternoon. The European Affairs Committee of the Bundestag, Germany’s federal parliament, was meeting to discuss the crisis in Belarus and what Germany's stance should be toward Russia, given his protection of Belarusian strongman Alexander Lukashenko. Maas was fiercely attacked from several sides.

Maas, a member of the center-left Social Democrats (SPD), the junior coalition partner to Chancellor Angela Merkel's Christian Democrats (CDU), first had to listen to a speech by far-left Left Party parliamentarian Diether Dehm, who defended Russia across the board. Then, he was attacked by Green Party lawmaker Manuel Sarrazin, for doing too little on the issue of Belarus. He accused Maas of "selling Belarus out" and giving Russia free hand, according to participants.

Furious, Maas blasted the Greens for their "smugness." But the foreign minister nevertheless seemed uncertain, and crucial questions remain unanswered: How does Germany intend to position itself on Belarus and Russia? What might sanctions look like? And what is the future of the German-Russian Nord Stream 2 gas pipeline project?

The only thing the government seems to agree on is that Germany needs to take a much harder line with Moscow. Not just because of Belarus: There is growing evidence that the Kremlin was involved in the poison attack on Russian opposition politician Alexei Navalny.

Scientists at the Institute of Pharmacology and Toxicology of the German Armed Forces have analyzed various samples from Navalny. Using fine diagnostics, they searched his blood and urine for any form of poison. Traces on a bottle that Navalny had with him were also examined intensively.

The institute claims that the substance administered is a further developed version of previously known Novichok compounds. The new poison is even "more severe" than previous forms, Bruno Kahl, the president of Germany’s foreign intelligence service, the BND, said in a confidential meeting.

The Organization for the Prohibition of Chemical Weapons (OPCW) is also involved in the investigations, and a delegation of the OPCW reportedly visited Charité University Hospital in Berlin, where Navalny is being treated, the weekend before last.

As such, the current assumption in Berlin is that Navalny must have been poisoned by a Russian secret service - either on his way to the airport in Tomsk for his flight to Moscow or once he arrived at the airport. Since it has been proven that the opposition politician was closely monitored by the domestic secret service, the FSB, there doesn’t appear to be any other possibility.

German security authorities suspect that the perpetrators planned for Navalny to die on board the plane. The pilot's rapid emergency landing in Omsk along with the antidote administered in the hospital saved his life. The Kremlin has vehemently denied multiple times having had anything to do with the attempted murder. Last Wednesday, the German Ambassador to Moscow, Géza Andreas von Geyr, was summoned by the Russian government for a "discussion.”

In recent days, German Chancellor Angela Merkel has ratcheted up her tone against Moscow. "We expect the Russian government to explain what happened in this case,” Merkel said. It was essentially her way of putting the ball back in Moscow's court and buying time. But what happens if Moscow doesn’t provide a satisfactory explanation? Would Berlin have to terminate the billion-euro Nord Stream 2 project shortly before its completion? In recent days, neither the foreign minister nor the chancellor has been willing to rule out that possibility. But they have very little support within their parties for taking such a step.

Even before the heated debate in the European Affairs Committee, Maas found himself faced with significant pushback for his unwillingness to rule out a suspension of the pipeline. And the criticism came from his own party group in parliament.

Florian Post, an SPD parliamentarian from Munich, spoke out against possible sanctions. He lamented a lack of proof that Russian authorities had ordered the poisoning of Navalny with Putin’s knowledge. "We would be shooting ourselves in the foot,” Post said. "Suspending Nord Stream 2 is not an option."

Although he is not opposed to sanctions as such, SPD party co-leader Norbert Walter-Borjans said he, too, is opposed to suspending construction on the pipeline. "We cannot simply stand by and watch this blatant violation of human rights. We need to show a strong European response," the SPD leader told DER SPIEGEL, and sanctions could be part of that response. "But Nord Stream 2 is something else. It's like a bridge with only the final stone missing. You don't leave it in ruins just because you have problems with each other now."

Carsten Schneider, a senior member of the parliamentary group, also called Nord Stream 2 the "wrong item.” Germany, he said, obtains its energy almost exclusively from "countries that are not entirely kosher.”

Within Chancellor Merkel’s center-right Christian Democrats (CDU), foreign policy pointman and candidate for party chair Norbert Röttgen has publicly called for the end of Nord Stream 2. But when the CDU parliamentary group met last week in a meeting also attended by the Christian Social Union (CSU), it’s Bavarian sister party, no one voiced support for his position.

On the contrary: Michael Kretschmer, the CDU governor of Saxony, had previously warned against focusing on the pipeline project, and he was supported by members of the CSU. CDU party leader Annegret Kramp-Karrenbauer merely said that the pipeline was "not a project of the heart."

Either way, it would be difficult to implement a government-ordered halt to the project. Some 94 percent of the approximately 2,460-kilometer (1,529 mile) pipeline has already been completed and permits have been issued by all the countries whose waters it travels through. Experts believe it would be necessary to create a special law banning the completion of construction that would have to be passed by German parliament.

"We would be shooting ourselves in the foot. Stopping Nord Stream 2 is not an option."

At best, the Federal Network Agency could delay the start of operations. The agency has to grant a permit to the company that is to take over operation of the pipeline in German and European Union territory. The agency could postpone permit issuance, but the authority is formally independent of the government.

Should construction be stopped, the German government could face potentially expensive lawsuits. So far, the Russians and the Europeans have been sharing the total costs of almost 10 billion euros. Russian gas giant Gazprom is covering one half of the construction costs, while five European companies - Wintershall, Uniper, OMV, Royal Dutch Shell and Engie - are footing the other half of the bill. Sources with links to Nord Stream 2 say that those companies are now looking into the possibility of compensation if the government moves to halt construction.

The demands could go even beyond that, however. Additional pipelines and compressor stations have already been built in Europe in anticipation of the new gas supplies. The gas arriving at the Baltic Sea coast is to be transported to Eastern and Southern Europe through these installations - and their operators could also make claims.

Against that backdrop, other sanctions – against individuals, institutions or certain sectors of the economy - seem more likely. Merkel is pushing for the sanctions to come from the EU level, with the bloc having plenty of experience with the tool.

German Ambassador to Moscow Geyr: The ball is now in Moscow's court.

EU sanctions programs are currently in place against 30 countries or against individuals from those countries. Between 1980 and 2014, 36 percent of all sanctions worldwide were imposed by the Europeans. With the exception of the United States, nobody has used sanctions as frequently as the EU.

After the occupation of Crimea in violation of international law, the EU moved to impose sanctions on Russia, imposing travel bans on 175 people and 44 institutions. The EU also froze assets. Furthermore, trade with Russia was restricted in several sectors of the economy and access to EU capital markets was closed off for certain Russian banks and companies. Brussels imposed bans on arms exports and imports and excluded Russia from sensitive technologies.

So far, though, there has been no ban on imports of Russian gas or oil. Given that this would increase prices for EU consumers, there would be little support for such measures within the EU. "An import stop for Russian gas would also hit Ukraine financially hard as a transit country,” Germany’s Economics Ministry has warned.

Most EU countries have agreed to impose travel bans and account bans soon for around 40 members of the regime in Belarus, including the country’s interior minister. Diplomats in Brussels fear that even more far-reaching measures, such as sanctions against Lukashenko himself, would only ensure that the ranks of those loyal to the dictator would close even tighter.

However, neither officials in Berlin nor in Brussels are in agreement on how effective sanctions can be. Speaking on a popular political talk show, German Economics Minister Peter Altmaier of the CDU said he knows of no case where sanctions "against states like Russia” have made a difference.

"Sanctions are a necessary part of the international policy toolbox for countries that seriously violate basic rules," says Johann Wadephul, deputy head of the CDU parliamentary group. He says Germany and the EU use them "as a clear sign of extreme political opposition.”

Officials within Germany’s Foreign Ministry,, though, are skeptical of punitive measures. Sanctions should not become standard nor should their use be increased, says a top German diplomat. The danger, he says, is that countries thus penalized could develop "resistance,” as to an antibiotic. Russia, for example, is trying to divert its trade flows and get high-tech goods from China that it is no longer able to obtain from the U.S. or Europe.

"With joint sanctions against Russia, the EU at least demonstrates unity,” says Sascha Lohmann, a political scientist at the German Institute for International and Security Affairs (SWP) in Berlin. When governments impose sanctions, they also protect themselves from complicity. "The European Union can’t simply stand by and watch events unfold in Belarus,” Lohmann says.

Julia Grauvogel, of the German Institute for Global and Area Studies, considers punitive measures against autocracies to be less effective than they can be against democracies. In the worst-case scenario, they can even stabilize the regime. "The sanctions reinforce the national sentiment of the population, and the population shows solidarity with the ruling classes,” the researcher says. She also see this danger in introducing further sanctions against Russia.

A 2018 study conducted for the European Parliament’s Subcommittee on Human Rights seems to support such skepticism. It found that individualized sanctions led "only in a few cases” to the desired result - i.e. a change in behavior.

Even as politicians in Brussels and Berlin seek the appropriate response to Russia’s actions, daily business is still continuing at the diplomatic level. On Friday, the Chancellery in Berlin invited representatives of Russia and Ukraine to a meeting of the "Normandy Format,” where the negotiations over the Minsk peace treaty for the Donbass region of Ukraine are ongoing. The meeting began at 1 p.m., with an evening snack at 9:30 p.m. Diplomatic sources said the Navalny case cannot be allowed to derail the possible ceasefire. 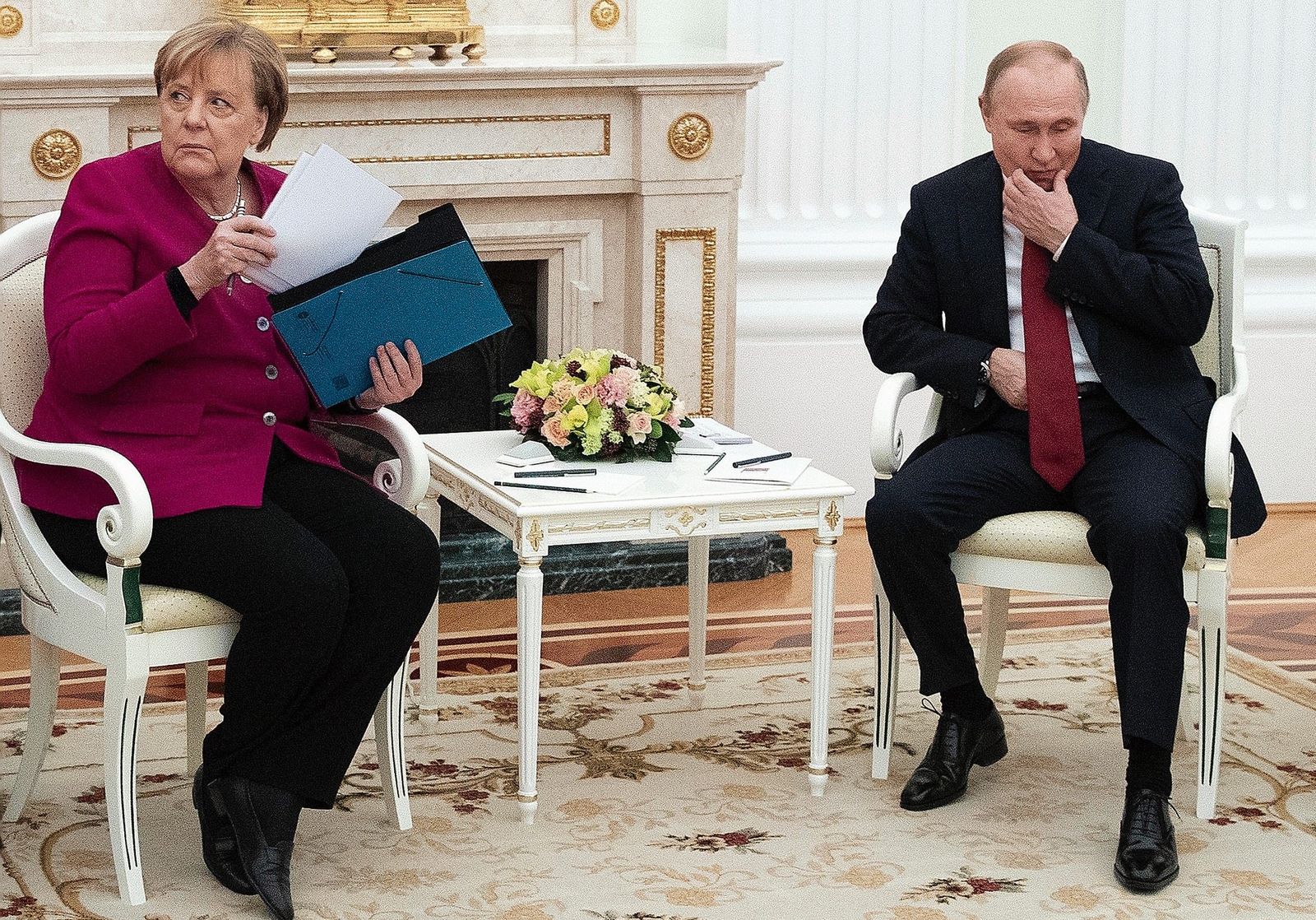 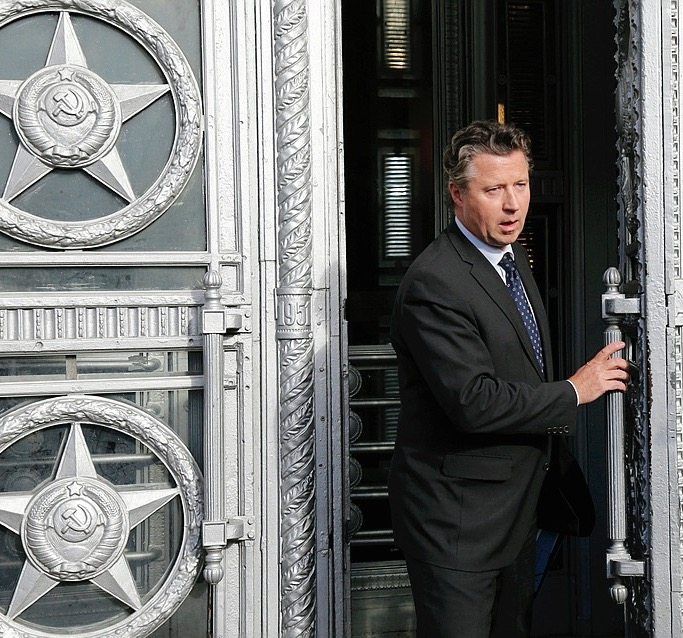 German Ambassador to Moscow Geyr: The ball is now in Moscow's court.