Amid extremely gloomy economic forecasts, Europe is bracing itself for a huge hike in unemployment, mounting budget deficits and, according to some, possible social unrest. The issues promise to loom large on Tuesday as European Union finance ministers gather in Brussels. And with some new member states facing severe budget difficulties, the 27 ministers are expected to double the amount of money it lends to some struggling countries. 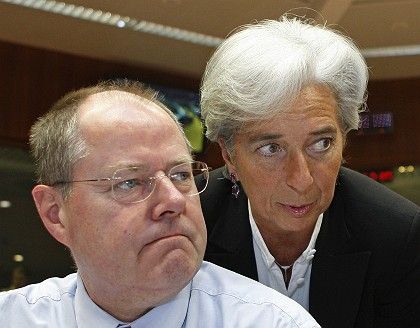 "It seems  the recession is at its worst, but hopefully next year we'll start coming out of it," Czech Finance Minister Miroslav Kalousek, who chairs the meeting, told reporters ahead of the meeting.

Greece's Finance Minister Yannis Papathanassiou called on his counterparts to work at returning to fiscal discipline as soon as the crisis over. "We have to return to the limits of the Stability and Growth Pact," he said on Tuesday.

The gathering comes a day after the European Commission said that the economy of the 27-member bloc would contract by 4 percent this year, more than double the prediction it made as recently as January. With exports and industrial output plummeting, unemployment is expected to soar to 11.5 percent by 2010 -- the equivalent of 8.5 million jobs disappearing over the next two years. Adding to these woes are the spiralling budget deficits as governments face mounting social welfare bills for the growing number of unemployed just as tax revenues shrink.

EU Economic and Monetary Affairs Commissioner Joaquin Almunia told a news conference on Monday that "the European economy is in the midst of its deepest and most widespread recession in the post-war era." However, he noted that the slump may be stabilizing. "We are no longer in a free fall," he told reporters. "But even if some positive signals are appearing, we do not have the critical mass of data to say we are out of the woods."

Luxembourg Prime Minister Jean-Claude Juncker, who is also president of the Euro Group made up of the 16 countries that use the euro as their currency, warned about the potential social fallout from the current economic crisis. "We are in the heart of an economic and financial crisis and we are headed towards a social crisis," he said after a meeting of the 16 euro zone finance ministers on Monday evening.

Juncker urged employers to hold off on shedding staff and instead cut working hours, warning that the euro zone faced a potentially "explosive" situation.

Nevertheless the euro zone finance ministers are resisting any increases to the amount they have devoted to stimulus packages in a bid to revive their flagging economies. "We need to first see the impact of the first round of measures," Dutch Finance Minister Wouter Bos said after Monday's meeting.

EU countries are constrained from spending more on boosting their economies by their widening deficits and mounting debts. This year, fully 13 countries within the 27-member bloc are likely to break EU deficit rules, which call for a maximum budget deficit of 3 percent of gross domestic product. All together, EU countries are likely to run a deficit twice the maximum allowed. This figure is expected to rise to 7.25 percent or €900 billion ($1,205 billion) next year.

The commission predicts that even normally fiscally prudent Germany will see its deficit surge to 3.9 percent of its GDP in 2009 and 5.9 percent next year. Germany has been badly hit by the near collapse in global trade and Brussels now expects its economy to contract by a huge 5.4 percent in 2009 as demand slumps for typical exports such as cars and machinery.

A first step towards dealing with the current recession and reducing unemployment involves the return to a fully functioning banking system. On Monday Brussels called on EU governments to move swiftly to clean up banks' balance sheets. Finnish Finance Minister Jyrki Katainen urged his counterparts to restore trust in the financial industry. "We have to solve the banking crisis first," Katainen told Reuters. "We cannot expect any recovery in the real economy before trust has returned to the banking sector."

Meanwhile, many EU states, particularly the newer states from Central and Eastern Europe, are struggling to balance their budgets and Brussels plans to help them out. During their meeting on Tuesday the finance ministers are expected to endorse plans to double to €50 billion the funds available to lend to countries in financial difficulties. The EU has already provided billions of euros in emergency loans to Hungary and Latvia and is now also about to help out Romania. Brussels is contributing up to €5 billion ($6.7 billion) to a much larger €20 billion ($26.48 billion) loan package approved for Romania by the International Monetary Fund on Monday.