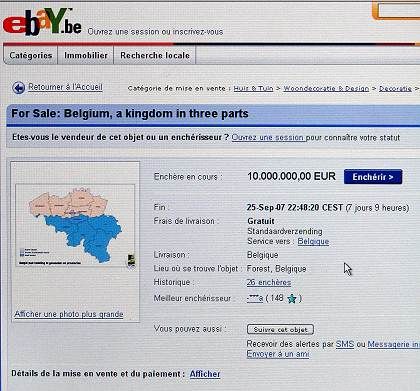 Belgium for sale. Any bidders?

Getting rid of old stuff -- no matter how run down, shabby or broken -- has never been easier. Just advertise it on eBay and before long the bids add up, the auction comes to an end, and your junk has a proud new owner.

But what do you do if the broken object happens to be a European country like Belgium? Apparently, that too can be sold on the Internet auction site. After 100 days of watching his country fail time and again to set up a government following June 10 elections, teacher Gerrit Six decided to put Belgium up for sale.

"For Sale: Belgium, a kingdom in three parts," the advertisement read. Six was also willing to throw in the king and his court at no extra cost -- though he did make sure the buyer was aware that supporting a monarch was not cheap.

"I wanted to attract attention," Six told the Associated Press. "You almost have to throw a rock through a window to get attention for Belgium."

Specifically, he wanted to shine the spotlight on the ongoing power struggle between the country's French-speaking Walloons and the Dutch-speaking Flemings -- a tug-of-war that is threatening to pull Belgium apart. The Flemings want more autonomy, primarily to force the poorer Wallonia region to become more accountable. The Walloons, for their part, would like to see a stronger federal government. Due to the complicated power calculus designed to hold the country together, the dispute has so far prevented them from being able to form a government.

According to recent polls, Belgians themselves are fed up. A poll Tuesday by the Belgian daily Het Laatste Nieuws showed that two-thirds of all Flemings think that the country is destined for a split sooner or later and almost half would welcome such a disintegration of Belgium. The newsweekly The Economist has been calling for a "praline divorce," in a two part reference to the country's famed confections and the so-called "Velvet Revolution" of then Czechoslovakia.

Six's eBay ad, placed on Saturday, claimed it would deliver the country free of charge but warned potential bidders that Belgium was not quite as good as new and that it came with over $300 billion (€220 billion) in debt.

"My proposal was to make it clear that Belgium was valuable, it's a masterpiece and we have to keep it," he told the AP. "It's my country and I'm taking care of it, and with me are millions of Belgians."

EBay itself decided to run the ad after seeing it for the humorous political send up it was. But it was pulled on Tuesday after someone actually made a bid of €10 million for the country.

The power struggle, though, continues with politicians of all stripes promising that there is no breakup pending. Indeed, it is far from the first time the country has faced calls for a split. Louis Michel, a Francophone politician, is so far unmoved by the gathering clouds. "One hundred days to form a government?" he asked rhetorically at a recent news conference. "We've seen worse."