Dockworker Nikos Georgiou first started unloading ships on the docks in the Greek port of Piraeus 24 years ago. Today the modern terminals, where in good years more than 1.5 million containers are processed, are proof positive that the economically devastated country is still capable of pulling itself back together. Nevertheless, there is little evidence of hope or confidence, at least among the dockworkers of Piraeus.

The Chinese have called the shots there for the last 17 months. The Chinese state-owned company Cosco acquired the rights to the container port for 35 years, with an option for an additional five years. The insolvent country is to receive €3.4 billion ($4.6 billion) in return, a significant contribution to Greece's battle against the crisis and a good omen for future financial support from Asia. But Georgiou takes a different view. "The conditions here are like something from the darkest Middle Ages," says the former dockworker.

Georgiou, 46, now the president of the influential dockworkers' union in Piraeus, says that the price for the China deal was too high for his fellow dockworkers. According to Georgiou, 250 people, or about one-sixth of all Piraeus dockworkers, have already been let go or forced into early retirement. Instead of employing experienced dockworkers at the going rate of €120 a day, Georgiou says that Cosco is only hiring unskilled laborers for €40-50 a day, without overtime pay for night or weekend work, of course, and certainly without any guarantee of employment. "The Chinese pay excessively low wages. If they didn't, they wouldn't be competitive," says Georgiou. "Meanwhile, we Greeks get the short end of the stick."

The union leader's concerns are understandable. In its search for solvent friends, the previous government under Socialist Prime Minister Giorgios Papandreou, which was replaced last week, hit pay dirt with the Communist leadership in Beijing. Now the world's newest major power, which has estimated foreign currency reserves of $3.2 trillion, is getting ready to snap up bargains in the upcoming privatization of Greek government-owned businesses.

Cosco, for example, wants to acquire another 23.1 percent of OLP, the Piraeus port authority. Beijing is the highest bidder for shares in Athens International Airport, in which the German construction giant Hochtief holds a 40 percent stake until 2026. The Chinese submitted the highest bid but also set the most conditions, say officials in the prime minister's office. At issue is a 20-year concession contract for the airport for the period from 2026 to 2046, for which the Greek government is asking €500 million.

Beijing has acquired a ship-to-rail transshipment facility near Piraeus, as well as a packaging center, and Chinese buyers are also interested in other ports, like the one near Timbaki and a port in southern Crete. In Thessaloniki, Greece's second-largest port city, the sale of a container terminal to one of three Chinese bidders was temporarily halted in the face of strong public protests against the plan.

The politicians in Athens find it difficult to understand the public's concerns. They see Chinese investment as a potential solution to their financial problems. Eva Kaili, a member of parliament with the Panhellenic Socialist Movement (PASOK), hopes that the Chinese will ultimately prevail in Thessaloniki. "We mustn't be afraid of investors," says Kaili.

Former Minister of State Charis Pampoukis, who resigned with Papandreou, even sees the Chinese stake in the Piraeus container port as "China's flagship investment in Greece." He hopes that "the Chinese government will continue to encourage its companies to invest in Greece."

"Good friends are there to help when someone is in trouble," Chinese Premier Wen Jiabao told his then-counterpart Papandreou in Athens this summer. Papandreou was overjoyed and promptly had his officials sign two dozen preliminary agreements. "The Chinese are coming," the Greek papers cheered.

It seemed to be a win-win situation for both sides. Athens would receive funds to plug its fiscal holes, while Beijing would gain new partners in the West and the access to a "gateway to Europe" for which it had been hoping.

Just how much of a blessing China's helping hands have been to date can be disputed. Whether all of the agreements have actually been implemented is just as unclear as the amount Beijing has invested so far in buying Greek government bonds. Wen Jiabao has repeatedly announced such purchases, but there is no precise information on exactly how large they have been and the total amount of Chinese investments in Greece to date.

"We are buying and holding Greek bonds," says a Chinese diplomat in Athens, "and we hope to buy more." When asked to elaborate, the diplomat smiles and says nothing.

Experts assume that China still has about 70 percent of its monetary reserves invested in US treasury bonds and only about 25 percent in euro-zone bonds, with the majority of those investments in low-risk German securities. Experts estimate that Beijing's purchases of euro-zone bonds from crisis-ridden countries like Greece and Portugal remain in the lower single-digit billion range.

Gao Xiqing, the president of the Chinese state-owned fund CIC, which invests the country's monetary reserves abroad, shares this assessment. "We are no white knights," Gao said in September on the sidelines of the International Monetary Fund meeting in Washington. "We have to save ourselves."

"No smart person invests in these kinds of bonds," Ma Weihua, the chairman of the partially state-owned China Merchants Bank, said at the World Economic Forum in Dalian, China. "We cannot sacrifice our interests to help others."

Learning From the Capitalist Class Enemy

What those interests are, quickly becomes apparent when Beijing's corporate bosses take advantage of the distress of Europe's debtor nations for strategically smart investments, an area in which the Chinese Communists have learned a thing or two from the capitalist class enemy.

For example, the governments of the two countries signed an agreement for a development fund that promises Greek ship owners the equivalent of €4 billion in loans, under the condition that they use the funds to have new ships built in Chinese shipyards. "No country in the world will help us out of pity," Constantine Yannidis, the president of the Greek-Chinese Chamber of Commerce, says almost apologetically.

'The Only Thing We Greeks Have Is Sun'

In June, the Chinese state-owned energy group Dongfang signed an agreement with Greek partner DTS for "long-term strategic cooperation" in the production of solar energy plants and wind turbines. The deal is worth more than €2 billion.

"The only thing that we Greeks have is sun," explains DTS President Vasilis Dritsas, "but the Chinese have the money." The deal, however, also came with painful conditions attached.

DTS will supply the Chinese with a patented technology that automatically orients solar modules to optimize the angle of incoming solar radiation, depending on the position of the sun. The thousands of solar panels that would be used for photovoltaic plants in Greece must be purchased from Chinese producers. But who would buy them, and with what funds? "We haven't seen any money yet," Dritsas admits.

Greece is pinning some of its hopes for future economic development on alternative energy sources, most notably solar technology. The Sky Solar Group, a Chinese company that develops alternative power plants, wants to acquire licenses and construction permits for 194 solar projects, each capable of producing 350 to 500 kilowatts of electricity, for a total investment of about €250 million. Once again, however, the Chinese have made sure that the deal works in their favor. Among other conditions, the systems and technologies have to be purchased in China.

Unlike his country's desperate politicians, Georgios Argitis, a professor of economics at the University of Athens, feels that the Chinese investments are likely to do more harm than good. "The gigantic, competitive Chinese companies will destroy an already weak production base in Greece," he says, and warns: "Europe must answer the geopolitical question of what role China should play on the old continent in the future."

But for now, the temptations of urgently needed help seem to outweigh the reservations. "The prospects are good. There's a lot of money in China," says the regional manager for Sky Solar in southwestern Europe, Zhang Ronghui, 36. "We are more competitive than the Europeans."

If a Chinese charm offensive were needed, the effervescent engineer would be the perfect spokesperson. Zhang, a computer scientist and educator who was born in Beijing, studied in Athens and has lived there for 16 years. She is familiar with both the Asian and the Greek mentalities, and she is polite and determined. "We don't believe that Greece will go bankrupt," says Zhang. "The European partners won't allow that to happen."

And if it does? "Then," says energy expert Zhang, "we'll be the last ones to go under." 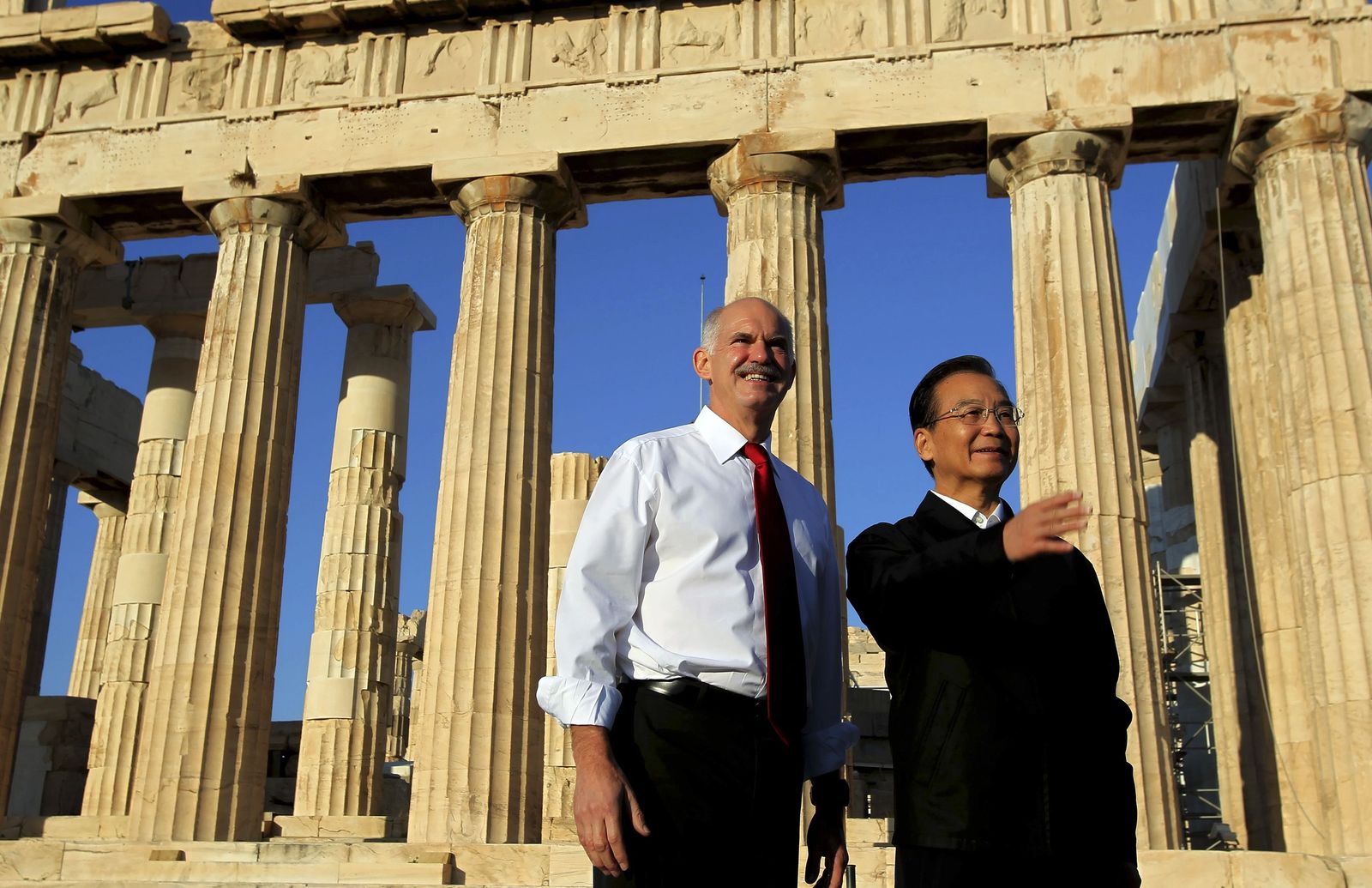 Former Greek Prime Minister George Papandreou with his Chinese counterpart Wen Jiabao in front of the Parthenon temple in Athens on Oct. 3.