When science-fiction writers envision the future of mankind, a number of ideas for improving the world repeatedly pop up. They include free, unlimited energy and spaceships traveling at the speed of light. And they include the creation of miniature computers that serve as universal translators, eliminating all language barriers.

The last of these dreams, at least, is something Google intends to make a reality. The man in charge of the project is a computer scientist from a small village near Erlangen, in southwestern Germany.

Franz Josef Och, 41, has long been focused on a single goal: to build the perfect translation computer, a machine that is so inconspicuous and fast "that you hardly notice it all, except as a whisper in your ear," a device that can promptly spit out any text, the content of a website or a conversation in any other language.

For Och, what could amount to trouble-free travel for tourists and a grim future for many interpreters is in fact much more: a path to artificial intelligence. Even as a teenager, he dreamed of machines that could simulate uniquely human attributes.

Och studied computer science and eventually earned a Ph.D., writing his dissertation on artificial intelligence. The Defense Advanced Research Projects Agency (DARPA), part of the United States Department of Defense, brought him to California. In 2004, Och received a call from Google co-founder Larry Page, who asked: Don't you want to scale up? Och was given his own department, Google Translate.

Exotic fantasies of the future are part of the Internet giant's business model, from the self-driving automobile to experiments on extending life expectancy. Although Google Translate has produced little to date, it is likely that no one has greater ambitions than Och and his team: They want to finally put an end to mankind's Babylonian mixture of languages.

The German computer scientist and his team have already made substantial progress. Google Translate can now translate text back and forth between 71 languages, be it from English into German or from Icelandic into Japanese.

For instance, when a SPIEGEL article is entered into the program, the user can obtain a French translation within a fraction of a second. Italian websites can be displayed in German with the touch of a button. A puzzling sign at a Japanese train station merely has to be photographed with a smartphone; the Translate app automatically recognizes the text in the image and translates it.

The Google service was used about 200 million times last year. And, so far, it has been free of charge. But multinational companies, in particular, would attach a great deal of value to an automated translation service; Google could almost certainly charge a substantial amount of money for the tool in the future.

For now, however, the company's goal is to perfect the service, and its path leads through the smartphone. The Translate team has developed an app that transforms smartphones into a talking translation machine, with the ability to handle about two dozen languages so far.

The app works very well, as long as sentences are kept relatively simple. For instance, someone who wants to tell a taxi driver in Beijing that he urgently needs to get to a pharmacy simply has to speak into his smartphone in, for example, German, and it promptly repeats the sentence in Chinese, correctly but in a somewhat tinny voice: "Qing dai wo qu yijia yaodian."

Och feels that the application is still "slightly slow and awkward, because you have to press buttons." The quality of the translation is also inconsistent. But only a few years ago, people would have said he was crazy if he had predicted what Translate could do today.

IBM laid the foundation for automated translation decades ago, but the project made no headway and was soon abandoned. For this reason, the first years at Google were "a pure research project" for Och and a handful of coworkers. Recently, however, they have made tremendous progress -- "a quantum leap," as Och calls it.

The Translate team, headquartered at Google's main campus in Silicon Valley, has grown considerably. It includes several German computer scientists, but not a single linguist. Och himself isn't exactly a talented linguist, either. On the contrary, he says, "I have trouble learning languages, and that's precisely the beauty of machine translation: The most important thing is to be good at math and statistics, and to be able to program."

Developing dictionaries, defining grammatical structures and all the rules that are normally fed into translation programs to mimic human translators hardly play a role for the Google team. In fact, rules often turn out to be too inflexible and are too much for the computer to handle. In English and in German, for example, adjectives precede the noun, whereas in French it's usually the other way around. As a result, a translation program quickly becomes "lost in translation."

Instead, Google emphasizes what it knows best: the sheer mass of data and statistics. "So what the system is basically doing (is) correlating existing translations and learning more or less on its own how to do that with billions and billions of words of text," says Och. "In the end, we compute probabilities of translation."

And the larger the mass of existing data, the better the system works. This is why the translation computer only became possible as a result of the Internet. The worldwide web offers an enormous wealth of existing translations.

The algorithms search through the clutter, gather data and learn along the way. For instance, when the program is tasked with translating a sentence from French into German, say, it searches for matching phrases that already exist and computes how to best compose a new sentence based on this information.

This often works well, but it is still far from perfect. Syntax, intonation and ambiguity remain a significant problem for automated translation programs. Often, the translations they produce are comprehensible, though barely, but are also a nightmare for linguists. The machine simply has no sense of aesthetics.

So does Google have to teach the program creativity to be truly successful? No, says Och, noting that it's really a question of "more effective learning." In other words, the computer needs to master the art of imitation.

The translations are generally better when, from the standpoint of the translation program, the languages are structurally similar in terms of grammar and word structure, and when there is a lot of data. The combination of English and Spanish works particularly well, whereas translating between English and Japanese isn't nearly as effective. "And, unfortunately, English and German happen to be among the difficult language pairs," says Och, "which really irks me."

But what exactly does Google plan to do with Translate? Does the company want to achieve a monopoly on human communication and supremacy over global interaction?

A Slice of Humanity

Och remains vague, saying that the business side of things isn't his department. But he is willing to say this much: "Machine translation makes a lot of information accessible for many people, and that makes many other things possible." The indirect benefit, he explains, is what's important. Google has taken a similar approach with its other products. Its search engine and email service are available at no charge, for now. But they also supply Google with hundreds of millions of users and their data.

At the same time, there is growing competition. A few weeks ago, Facebook acquired a small company that has developed a system for language entry and automated translation. The social network wants to use the system to facilitate communication among its users, of which there are more than a billion from upwards of 200 countries.

The European Union has developed its own automated translation program, called MT@EC, which is primarily designed to tackle bureaucratic jargon. Owing to budget cuts, the EU will likely have to eliminate 10 percent of its human translation workforce in the coming years.

Microsoft has also launched a translation project. Last fall, Rick Rashid, head of Microsoft Research's worldwide operations, unveiled the result at a conference in China. Rashid spoke in English, and a Microsoft computer simultaneously translated his words into Mandarin -- not in a tinny monotone, but in Rashid's own voice, assembled from previously recorded speech samples. At least it captured a slice of humanity. 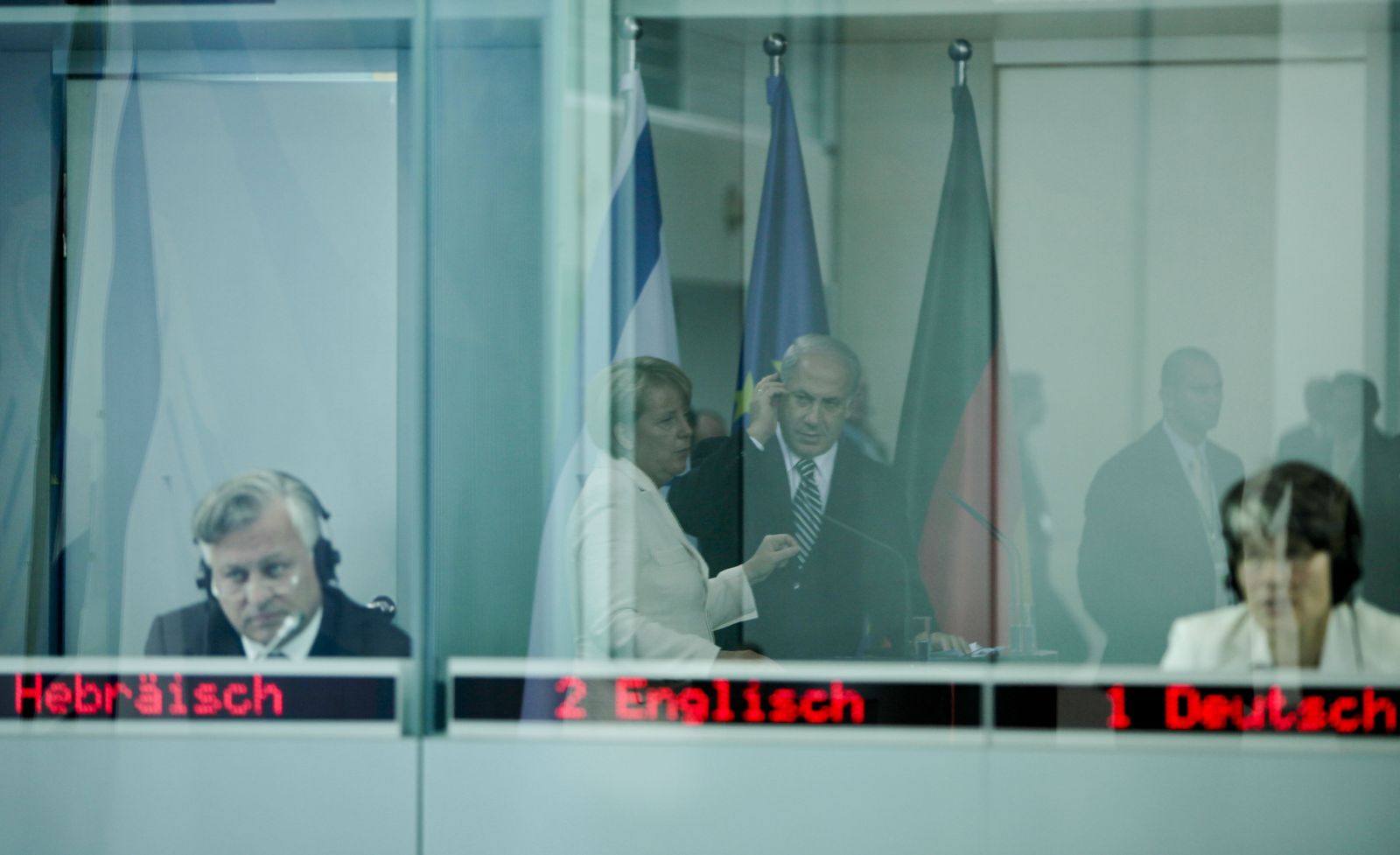 German Chancellor Angela Merkel and Israeli Prime Minister Benjamin Netanyahu seen in the reflection of the interpreter's booth at a Berlin press briefing in 2009.