Greece's magic number these days appears to be three. According to preliminary election results, the conservative party New Democracy (ND) is three percentage points ahead of the left-wing coalition Syriza. That means that ND head Antonis Samaras has three days to assemble his coalition. And there are indications that his government may ultimately include a trio of parties.

One of those parties is the socialist PASOK, led by Evangelos Venizelos. But following a meeting with Samaras on Monday evening, Venizelos said that the pair has not yet reached agreement. "We need to find a solution by tomorrow evening," he said, and added that he favored as broad a coalition as possible and asked that Greek President Karolos Papoulias call a meeting of leaders of the most important parties.

With talks already approaching conclusion, Venezilos' demand is notable. After all, a coalition between the ND and PASOK would be plenty to secure a functioning parliamentary majority of 162 out of 300 seats. The last elected prime minister, Giorgios Papandreou, governed with but a single-vote majority.

Still, it would make sense for Samaras to follow Venizelos' suggestion. PASOK is instable and rife with internal power struggles, the result of plummeting from 44 percent support in 2009 to just 12 percent today. Venizelos has even saw fit to threaten some particularly obstreperous members with ejection from the party.

But what is good for Samaras may not be good for Germany and Europe. According to a report in the Wall Street Journal on Monday afternoon, ND and PASOK will ask Europe for a two-year extension to the deadline by which they are to meet their fiscal targets. Citing officials involved in the preparation of the request, the paper reported that Greece would need an additional €16 billion in aid funding as a result, on top of the €130 billion Europe earmarked for the country earlier this year.

It is unclear how Europe would respond to such a request, though it seems clear that Germany would offer significant resistance. Chancellor Angela Merkel's coalition is anything but harmonious and internal bickering would almost certainly result, should she agree to increase funding for Greece. At the G-20 summit in Mexico on Monday, she said that Athens "must fulfil its commitments quickly," adding that "there won't be any changes to the memorandum of understanding" which laid out the conditions Greece must meet in exchange for bailout aid.

Still, the two-year extension was a significant part of Samaras' campaign platform. Furthermore, he was only a late convert to the European bailout conditions, and came around only after being subjected to immense pressure from conservative parties elsewhere in Europe. It seems likely that his party would be decidedly unhappy were Samaras to prove unable to fulfil his promise of an austerity respite.

First, however, the ND leader must assemble a stable coalition. One possible third party in the running is the Democratic Left. Having won 6 percent of the vote on Sunday, the party stands to receive 17 seats in parliament. Perhaps more importantly, the inclusion of the Democratic Left would mean the coalition would represent over 50 percent of all votes cast, providing it with a significant measure of legitimacy.

Such a move would also serve to stabilize PASOK. Many in the Socialist party already have great sympathy for the Democratic Left and its inclusion in the coalition would serve to bind those members tighter to the government. Venizelos on Tuesday was hopeful that such a partnership was in the offing. "Greece must and will have a government as soon as possible," Venizelos told reporters after a morning meeting with Democratic Left leader Fotis Kouvelis before adding that he was "optimistic."

A rapid conclusion to the ongoing coalition talks would stand in stark contrast to the confusion that prevailed following the last Greek elections, held in May. Despite international pressure, results from that vote made it virtually impossible for Greece's leading parties to form a government. New elections had to be called.

In the interim, there was fear that the anti-bailout leftist coalition Syriza might emerge as the country's strongest party, an eventuality that many feared would throw financial markets into chaos and lead to a Greek exit from the euro zone.

A return to such chaos remains a possibility. Greece appears to be returning to the two parties that have alternated leadership in the country since the end of military rule in 1974 -- the same two parties that are largely responsible for the dire straits in which the country now finds itself. If recent history is any guide, it likely won't take much to sour voters on their new leaders.

"Political leaders should be aware of the fact that this government is Greece's last chance to remain in the euro zone," wrote the center-left daily Ta Nea in a Tuesday editorial. "The Greek people are ready to reward the parties that manage to ease austerity and punish those that raise voices of dissent." 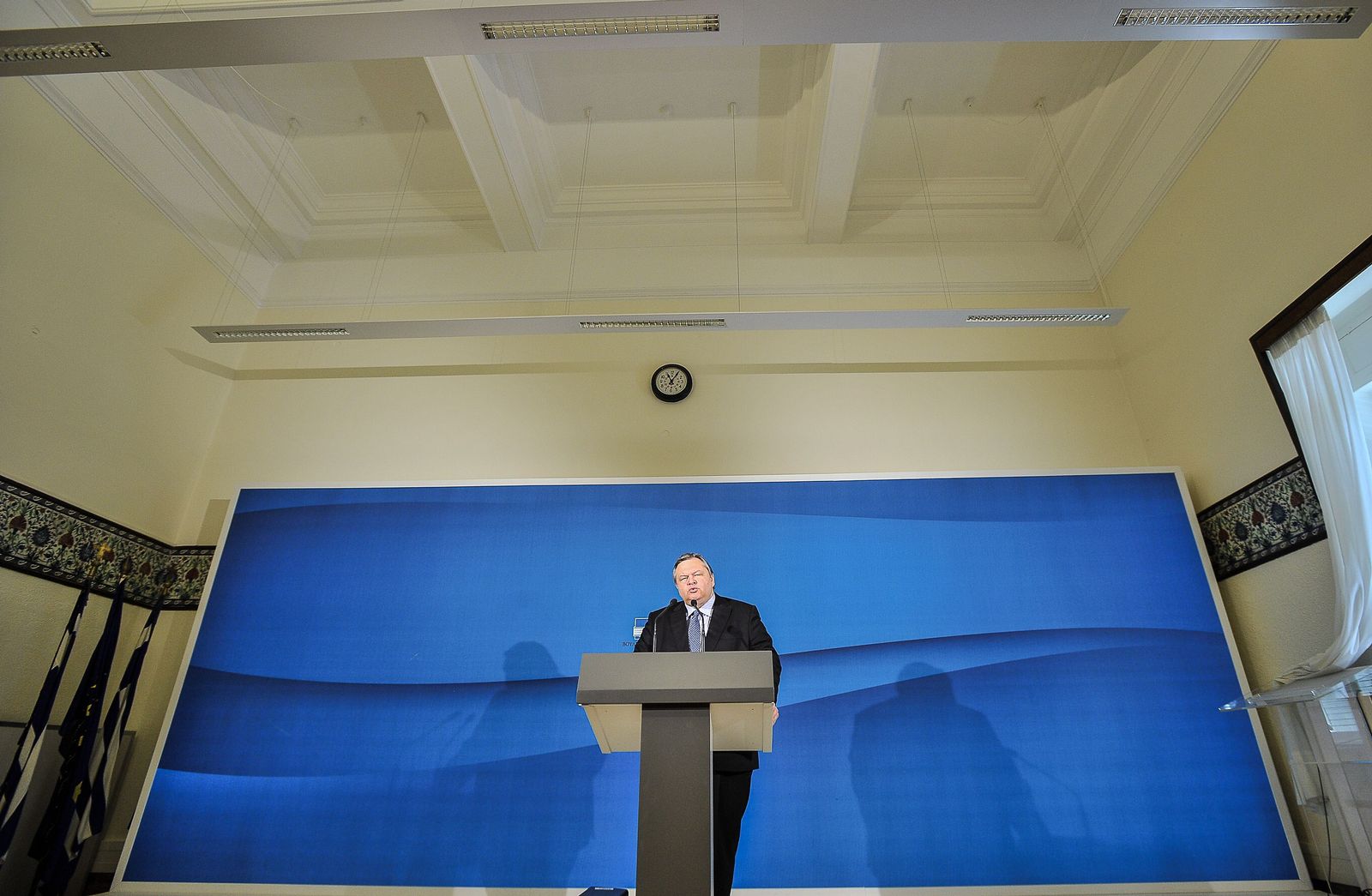 Evangelos Venizelos, head of the PASOK party, speaks to the press on Tuesday following talks with the Democratic Left.