The 2004 Olympic Games in Athens were easily the high point in the career of Kostaris Antonis, 45. "I had never before experienced such a thing, neither emotionally nor financially," he says. Antonis is sitting on his rooftop terrace, which looks out onto the Acropolis. His eyes glow in the sun -- and with the memory of Greece's grand success six years ago.

Antonis is the head of a mid-sized landscaping company with some 50 employees, depending on the season and demand. Prior to the Olympics, Antonis was able to beat out a number of other companies for contracts to beautify game venues in both Athens and Piraeus. Even today, he says, he is still "especially proud" of the honor. It also reminds him of a time when the world still seemed intact.

Today, Antonis still specializes in large projects with high visibility. But his pride has slowly given way to financial worries. "I don't know anymore how I'm going to go forward," he says.

He adds that clients owe him a total of €4 million ($5.4 million) for work already completed -- with most of the projects having been done for municipalities and other public entities. The northern city of Thessaloniki, for example, owes him €780,000, and there is no sign that it will pay him any time soon.

The open account stems for work done in 2006 to beautify venues for an international track and field meet. The contractor was the General Secretariat of Sports, a division of the country's Culture Ministry. But, so far, not a single cent from the job has landed in Antonis' account. "It bothers me and sometimes really gets me down," he says.

But it's not the only deadbeat customer on Antonis' books. Indeed, unpaid invoices have become the rule rather than the exception for his company, particularly when it comes to public contractors. He is also owed €180,000 for landscaping work done along some of the main roads in central Athens last year. The 2009 fiscal year has long since passed, but Antonis has seen no money from the project. He has repeatedly been told "there were parliamentary elections," whatever that's supposed to mean.

If he is lucky, he is able to use the outstanding invoices as collateral to secure bank financing. But being dependent on financial institutions during a crisis is hardly a comfortable place to be. Furthermore, he has to pay the interest himself and then try to get it back from the public creditors. "To be honest, there are moments when I think about just throwing in the towel," Antonis says. "It can't go on like this."

The situation Antonis finds himself in is something being felt across the entire country. Fear is widespread -- fear of a national bankruptcy or of losing one's own livelihood. Nobody quite knows what a Greek insolvency would look like, but everyone assumes that things are going to get worse -- or even completely horrible.

Even If It Hurts

Still, many in Greece have found a new cause for hope. Headlines, of course, are made by those who call general strikes and stage demonstrations in downtown Athens. But much of the population is now cautiously optimistic that Greek Prime Minister Georgios Papandreou, the country's recently elected leader, will be able to lead the country out of crisis with his brutally honest assessment of Greece's atrocious financial situation. On Friday, Papandreou is in Berlin for talks with Chancellor Angela Merkel. Prior to his visit, he asked in an interview for assistance from the German government -- Berlin, he hopes, will help Greece secure better credit rates on the international financial markets.

"The new government is showing a desire to impose order," Antonis says, full of praise, adding that he is convinced that "the words will be followed by action."

Even if it hurts. The drastic austerity measures that Papandreou announced on Wednesday -- and which were approved by Greece's parliament on Friday -- are even stricter than the ones that were originally envisioned. In all, the package of public-sector salary cuts, tax increases and pension freezes is worth €4.8 billion. "The days, weeks and months to come will not be easy," Papandreou said. He compared the situation with a "state of war." Unions responded promptly, threatening new demonstrations, general strikes and the occupation of government offices and agencies.

Indeed, in the coming weeks, how Papandreou interacts with his own countrymen will be one of the decisive questions. In addition to winning back the faith of the financial markets and the European Union, he must also win trust on the Greek street -- and increase it.

For now, surveys indicate that up to two-thirds of Greeks support the austerity measures passed by the Papandreou government. Support for his party, the Panhellenic Socialist Movement (PASOK), is at 48 percent, higher than it has been in decades. Still, the same figure illustrates a split in Greece -- between those who realize the time has come for belt-tightening and those who want things to remain as they have been, no matter what the consequences are.

Kostas belongs to the latter group. The 38-year-old tax official, whose job won't allow him to provide his last name, is vehemently opposed to the austerity measures. "It's not the civil servants that are the thieves," he says. "It's the others." For this reason, he participated in the recent labor disputes "on principle" as well as in last week's general strike. And he'll do it again, too. As he sees it, these are "defensive actions." "But a strike alone," he says, "can't block the state's way forward."

Including benefits, Kostas' after-tax income is €1,900 ($2,600) a month. His wife, likewise a tax official, earns the same. He says that, with the introduction of the reforms, he, his wife and their three-year-old son will have to make do with at least €500 less per month. "That is a huge problem for our household budget," he says.

Still, they are relatively privileged. They earn more than the average Greek salary of €700-€900 per month and, as civil servants, they can't be fired or laid off. And, the bloated Greek bureaucracy is a major part of the problem. One out of every four people working in Greece is an employee of the state.

The Art of Survival

As Alternative Foreign Minister Dimitris Droutsas says, the government finds it "only natural that there are also counter-reactions and resentment." He adds: "We have to convince our population that we will proceed in a way that is as socially just as possible. That those with less won't be squeezed, and that those with more will be asked to contribute more to the rehabilitation. It's an issue of credibility."

In essence, though, it's not merely a question of tax and pension system reform aimed at getting the country back on track. Rather, it is an offensive against an ingrained culture and mentality. It's about the art of everyday survival in modern-day Greece.

Such survival has long been dependent on who you know -- and how much you are willing to pay in bribes. The system is known as "fakelaki" -- a word meaning "little envelope" and which refers to the bribes regularly demanded of Greek citizens to "expedite" service. In reality, of course, no fakelaki often translates to no service. Sums of money stuffed in envelopes are passed across desks to secure appointments, documents and permits. It's a playful form of corruption that is firmly anchored in everyday Greek life.

In a recent survey, 13.5 percent of Greek respondents admitted to paying fakelaki; on average, they said they paid €1,450 ($1,970) a year. In reality, though, the numbers and sums could be much, much higher. In Greece, cronyism and bribery go together like gyros and tzatziki. As television sports reporter Dimitris Malisiovas says, there are two important things in a Greek's life: "knowing someone in the right position and tipping."

As one German who does business in Greece says, you "practically can't get a driver's license without some fakelaki," adding that you certainly won't get one on the first try. The way it regularly works, he says, is that you will have "two testers, each of whom gets €100." And for an important operation, you'll often have to fork over up to €4,500, even if the cost itself is already covered by medical insurance.

Officials estimate that, of the 25 million houses and buildings in Greece, 10 percent of them are completely illegal and 80 percent are partially illegal, expanded or renovated without a permit. Bribes, of course, cleared the way. Then there is the practice of collecting the pensions of those who have passed away. The most recent census found that pension checks of between 40,000 and 60,000 deceased people, some of whom have been dead for years, were still being cashed. As one civil servant explains, dead people are responsible for notifying the pensions office of their deaths themselves. 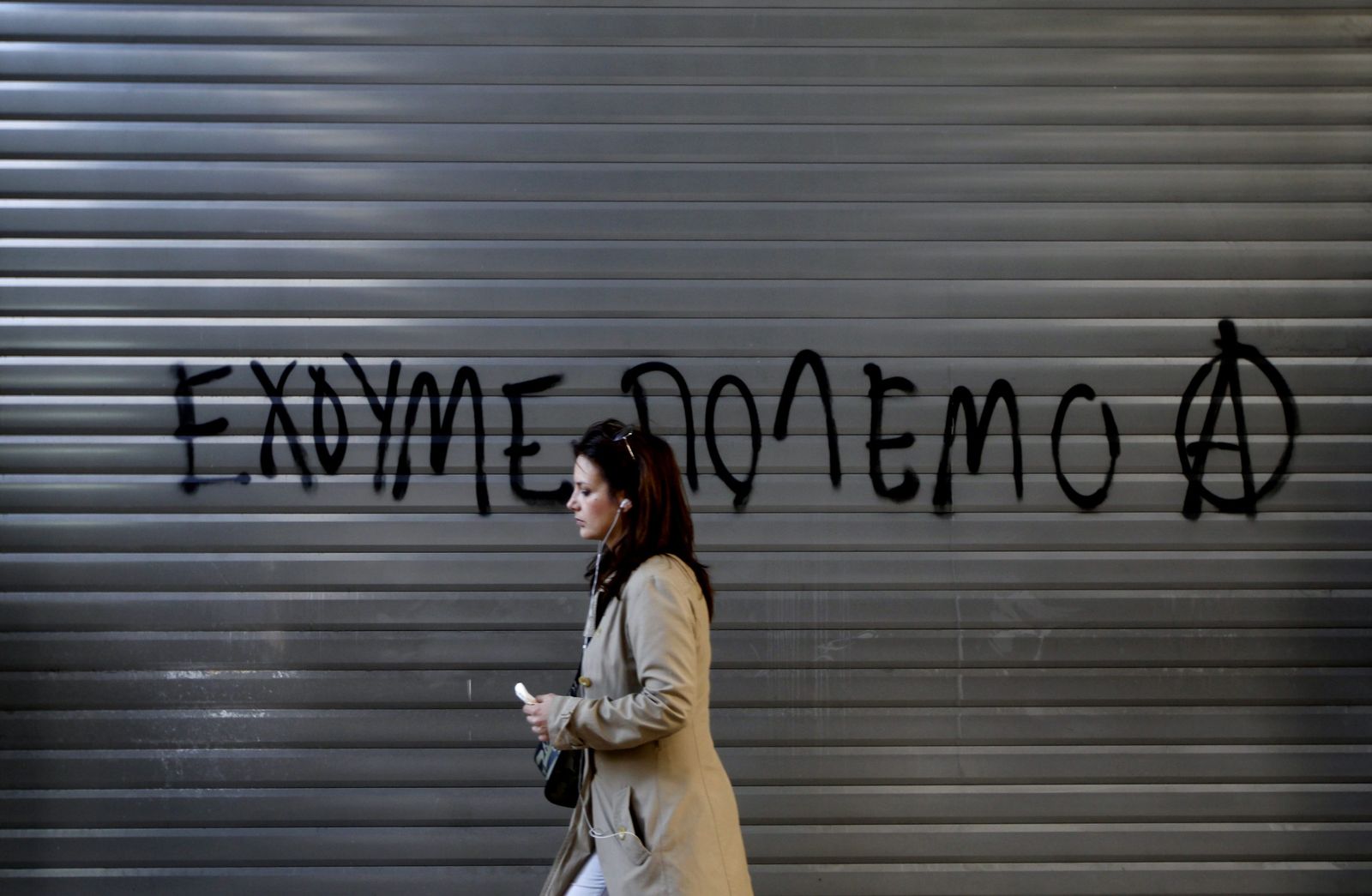 A woman in Athens walking by a slogan reading "We Are at War."