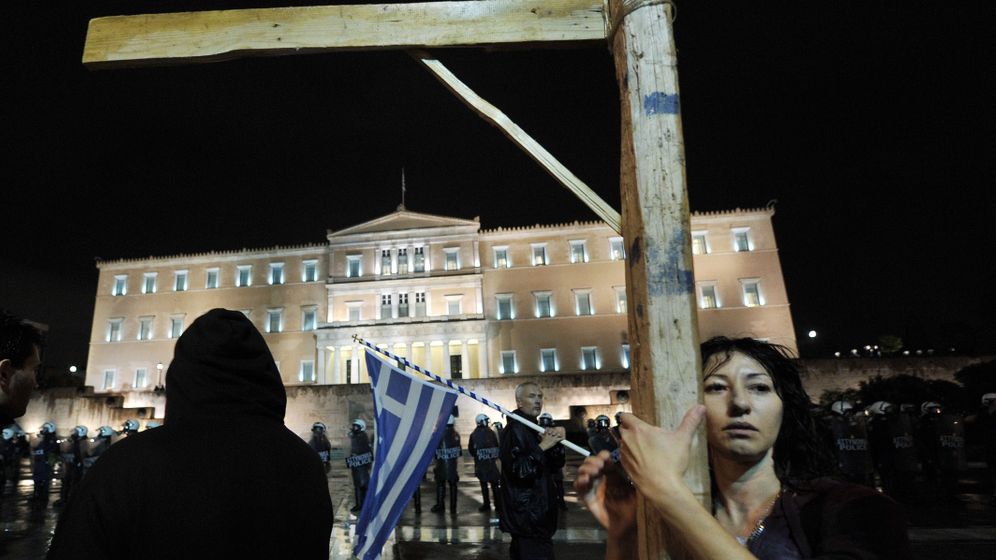 Residents of Athens on Thursday woke up to more chaos. For the third straight day, subways, commuter trains and taxis were on strike, leading to gridlocked traffic as those needing to get to work took to their cars.

The more significant bedlam, however, took place the previous evening in parliament and on the streets outside. Greek lawmakers passed yet another painful austerity package on Wednesday night worth €13.5 billion ($17 billion) over two years, an important step toward receiving the next €31.5 billion tranche of European Union aid money. But the vote revealed signs that Prime Minister Antonis Samaras' governing coalition could be fracturing, while 80,000 protesters demonstrating in central Athens reminded leaders that biting austerity is also taking its toll on Greek society.

Samaras did his best to exude confidence, saying the bill "will finally rid the country of drachmophobia." He added that "many of these measures are fair and should have been taken years ago, without anyone asking us to. Others are unfair -- cutting wages and salaries -- and there is no point in dressing this up as something else."

But, he noted, the alternative was a Greek bankruptcy -- looming, Athens says, as early as the end of next week should the EU continue to withhold funding.

The austerity package squeaked through with a 153 to 128 majority in the 300-member parliament. But Samaras, of the conservatives, and Evangelos Venizelos, who heads up the coalition-partner Socialists, saw several lawmakers jump ship and ultimately expelled seven of them from their ranks. Many other parliamentarians, part of a third coalition party, the Democratic Left, abstained from the vote. The result is a weakened government which could have difficulty passing controversial laws in the future. And the to-do list remains long, with labor market reform, stricter tax evasion laws and laws aimed at the shadow economy still to come.

Furthermore, despite the austerity package -- which included significant pension cuts, tax increases, an increase of the retirement age from 65 to 67 and a loosening of job protection laws to make it easier to fire civil servants -- Greece's stumbling economy means it is possible that more cuts may ultimately be needed to achieve the budgetary goals the EU has set for the country. The year 2013 is expected to be the sixth year running in which the Greek economy has been in recession, and unemployment is at the staggering level of 25 percent.

The demonstrations on Wednesday evening were largely peaceful, called by the country's largest labor unions. But as has often been the case, several dozen protesters began hurling Molotov cocktails and stones at riot police, who responded with tear gas, stun grenades and water cannons. The protests came after two days of paralysis in Athens with all public facilities remaining closed in the country, including public transportation, schools, post offices, museums and other tourist sites. Ferries likewise remained docked.

Still, the austerity package was a necessary step toward convincing the country's creditors that Greece is making progress toward budgetary health. Euro-zone leaders have continued to insist that no decision will be made on the next aid tranche until after the troika -- made up of the European Commission, the European Central Bank and the International Monetary Fund -- issues its next report in the coming days. But Wednesday's austerity deal has long been cited as an important prerequisite. Samaras has said that Greece will become insolvent on November 16 without additional funding.

The cuts promise to further increase the difficulties normal Greeks are facing. The average pension in the country will now be €617 ($787) per month and the average salary a paltry €950. The salaries of leading public servants have also been radically cut, with the army chief of staff now receiving take-home pay of just €1,872 per month and Greek ambassadors just €1,899.

Europe, though, continues to take a hard line. "Our Greek friends have no other choice," said Jean-Claude Juncker, head of the Euro Group, on the sidelines of a conference in Singapore. "And my impression is that Greek citizens continue to better understand the reforms that have been undertaken."