After days of difficult negotiations, the leaders of the parties that comprise the Greek coalition government agreed to implement new austerity measures required in order for the country to receive additional aid from the European Union and the International Monetary Fund (IMF), the office of Prime Minister Lucas Papademos announced on Thursday.

The highly indebted euro-zone country is close to insolvency, and the government in Athens appears to be willing to meet most of the demands made by the troika, comprised of the EU, IMF and European Central Bank (ECB), responsible for determining if Greece has fulfilled its aid requirements.

ECB chief Mario Draghi confirmed he had been informed by Papademos of the agreement. "A few minutes ago I got a phone call from the prime minister of Greece saying that an agreement has been reached," Draghi said.

Time is running out; and without a firm commitment of reform, Greece's European partners didn't want to release to Greece the second aid package, worth €130 billion ($173 billion). On Thursday evening, the euro-zone finance ministers plan to meet in Brussels in order to discuss the overall situation and the savings pledges made by Athens. The ECB's Draghi and IMF chief Christine Lagarde are also expected to participate in the meeting.

German Finance Minister Wolfgang Schäuble said on Thursday evening, however, that he did not anticipate that a final decision would emerge from the meeting. He also expressed skepticism that the agreement reached in Athens would be enough to secure funding. "The agreement, as far as I understand, is not at a stage where it can be signed off," Schäuble said according to the Associated Press. He said that any deal had to be sufficient to bring down Greek debt to 120 percent of gross domestic product by 2020 and limit the need for bailout money to the previously agreed €130 billion. "Those general requirements are not fulfilled yet," he said.

Europe had increased pressure on Greece in the final rounds of negotiations after earlier talks failed to produce a breakthrough. A spokesperson for European Commissioner for Currency and Monetary Policy Olli Rehn pushed all sides to hurry in order to prevent a Greek default. "We are in overtime," the spokesman said. German Foreign Minister Guido Westerwelle, of the business-friendly Free Democratic Party (FDP), also warned that time for a solution was running out.

"I hope that the meeting of the Euro Group takes place and that the new program is approved," Greek Finance Minister Evangelos Venizelos said on television. "The financial survival of the country in the coming years depends on the new program … It is a time of responsibility for everyone," he said earlier in the afternoon." If Greece doesn't obtain further billions in aid, then it will default in March. On March 20, government bonds with a value of €14.5 billion are set for redemption.

On Wednesday night, the party chiefs in Athens negotiated for seven hours. However, the meeting was broken off because the party leaders were unable to reach an agreement on pension cuts. Both the EU and the IMF had demanded that Greece cut its controversial supplementary pensions by up to 15 percent, but the measure had been met by massive resistance from unions -- who mobilized a general strike on Tuesday against the austerity course.

The Greek daily Kathimerini is reporting that the $300 million in savings originally set to come from pension cuts would now come from cuts in defense spending and elsewhere. Another government official told Reuters, "There will be cuts in other areas of public spending and we will see how we will minimize reductions in pensions."

Overnight, the party chiefs also agreed to reduce the minimum wage by 22 percent. They did not, however, agree to cut the vacation bonus that is the equivalent of two month's salary paid to many workers.

The country is also expected to eliminate 15,000 jobs in the public sector by the end of the year. And in the private sector, all wages are to be frozen for as long as it takes to reduce the current unemployment rate of 21 percent down to 10 percent. On Thursday evening, Deputy Labor Minister Yannis Koutsoukos, a member of the Socialist party, resigned in protest over the austerity deal.

On Friday morning, parliamentary leaders of Germany's leading parties are to converge at a special meeting of the Bundestag to discuss the Greek aid package. Citing sources in her party, German news agency dapd reported that Chancellor Angela Merkel plans to discuss the current situation with ranking members of the parties in parliament. 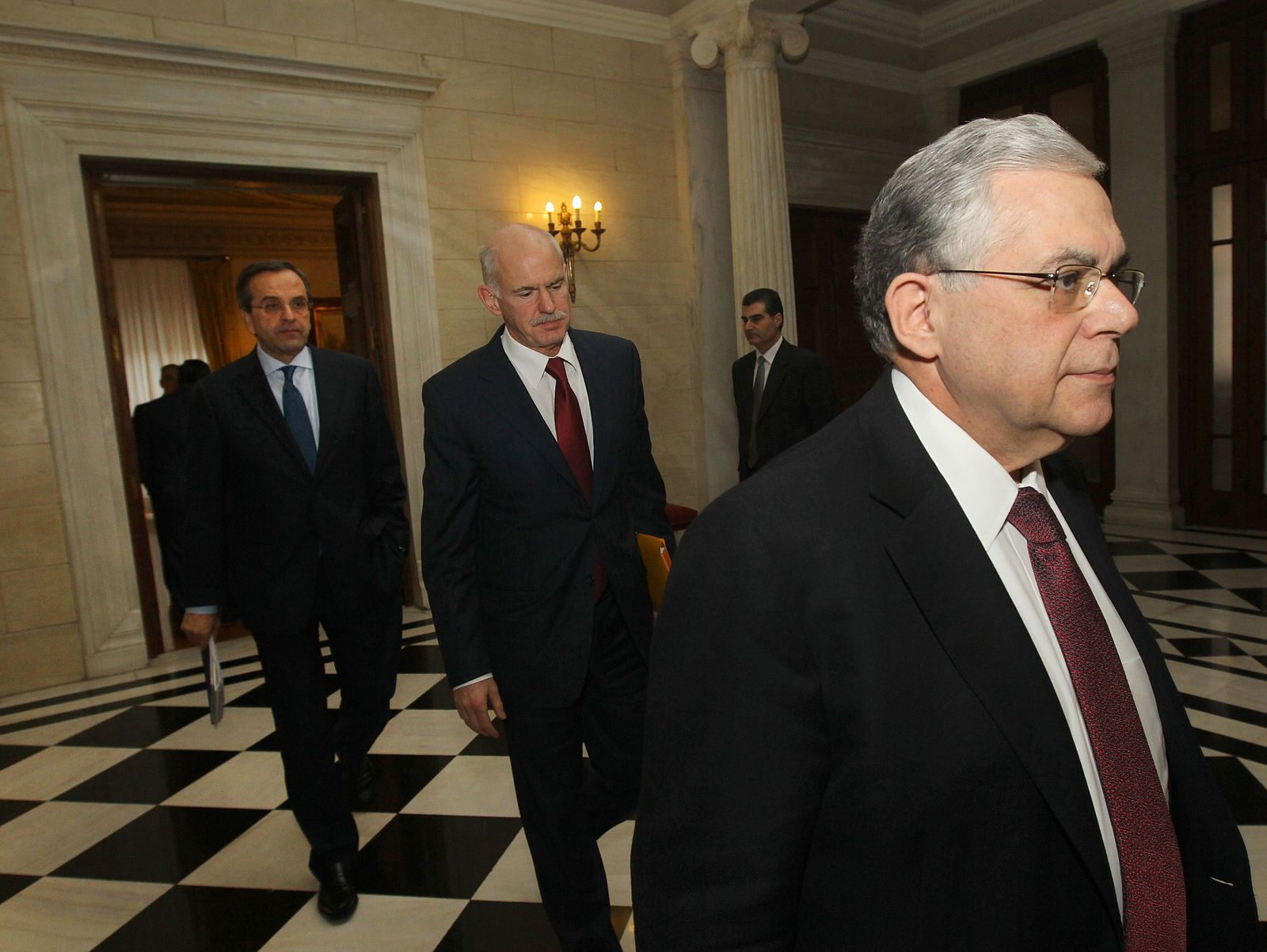