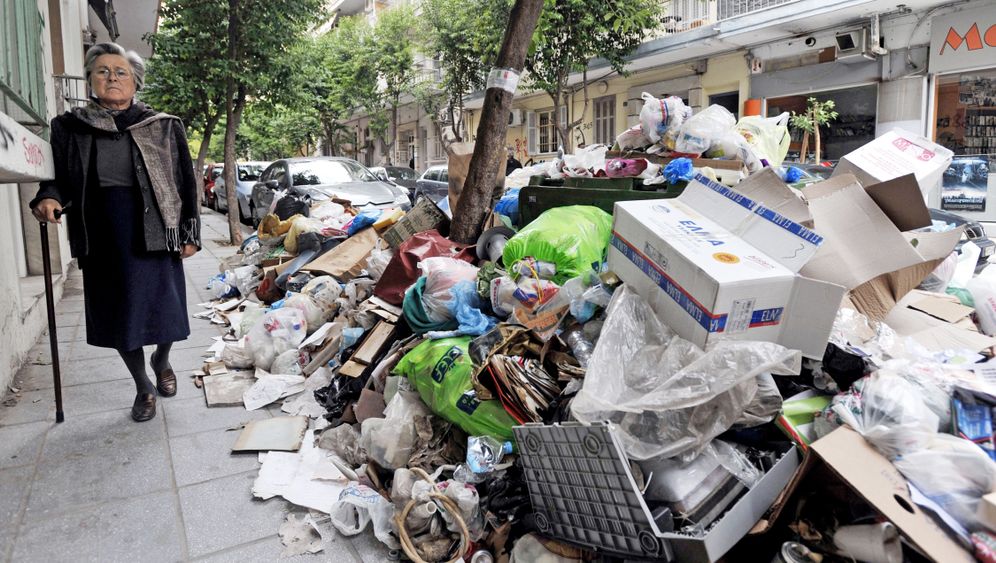 On a recent Thursday, the mayor of the northern Greek city of Thessaloniki was sitting in an enormous office in Berlin's Tempelhof district. He didn't mince his words. "Your city is clean, while ours is dirty," said Yiannis Boutaris, speaking in a deep and gravelly voice. "What works in your city doesn't work in ours." He had come to Berlin to learn how to change this deplorable state of affairs. And he wants to do it as quickly as possible.

Boutaris, 69, is a slim, wiry man with gold-colored, metal-rimmed glasses, a gold stud in his ear and spiky gray hair. He and his delegation are visiting the headquarters of the Berlin waste utility BSR. A projector hangs on the wall above him. Boutaris has just watched a PowerPoint presentation about Berlin's approach to the "recycling of biogenic waste to use organic residual material from residential waste." He now knows that the German capital generates 1.3 million tons of garbage a year, and that the city's 200,000 dogs present one of the biggest obstacles to keeping streets clean.

Dogs are the least of his problems in Thessaloniki, where the entire waste disposal system doesn't work. Boutaris raises his hands and says: "We need your help."

The fact that the mayor of Greece's second-largest city is making this request is a minor sensation in itself. Not a day passes on which one Greek paper or another doesn't discuss the supposed parallels between present-day conditions in the country and the Nazi occupation. And now a Greek politician is asking the Germans for advice on how to clean up his city?

It would be an understatement to say that relations between the Greeks and the Germans are in bad shape. The Greeks hate German Chancellor Angela Merkel even more than their own politicians, who don't dare to go out in the streets anymore. The Greeks believe that the austerity measures Merkel is demanding of them are making their lives increasingly impossible.

Boutaris is the most unusual politician in Greece, despite his insistence that he is not a politician at all. In fact, he says, he is the opposite of a politician, a businessman who has taken on a new project: running the city of Thessaloniki, where he has been mayor for almost exactly a year.

It's relatively uncommon for the international observers working for the so-called troika of the European Union, the International Monetary Fund (IMF) and the European Central Bank (ECB) in Athens to say something complimentary about a Greek politician. And it's almost unheard of for them to praise a Greek for his penchant for reform, as they are doing with Boutaris. In their reports home, the officials write that, since Boutaris came into office, Thessaloniki has been an "island of hope" and a "model for all of Greece." A member of the European Commission team in Athens says: "Boutaris is the exception, a beacon. Everyone else can learn something from him."

The widely praised politician is actually a vintner by trade. His Xinomavro, Syrah and Merlot wines have won gold medals in international competitions. He turned over his vineyard to his three children when he decided, a few years ago, to devote his full attention to the city.

Seven years ago he established the "Initiative for Thessaloniki," a sort of citizens' association. He began cycling through the city as part of a campaign for more public transportation and better upkeep of public spaces. He has been the mayor since January 2011 and is not affiliated with any party, although the center-left Panhellenic Socialist Movement (PASOK) supported him in the election.

"It took a while, but now I know how everything works here," says Boutaris, with a grimace of his wrinkled face. He is standing in front of a pin board in his office in the city hall, a dreary concrete block of a building. It's around noon on a February day. Janis Joplin's raspy voice is playing on the stereo. Tacked to the pin board behind him is a piece of white paper. Written on it, in English, is the message: "We're going to believe in honest things again."

"The good thing about the crisis," says Boutaris, is that the Greeks are being forced to change their way of thinking, and that the politicians' empty promises and irresponsible actions have come to an end. "There isn't any money left to buy voters," says Boutaris. As a result, he says, politicians actually have to do something.

Shortly after taking office, Boutaris traveled to Istanbul to launch a campaign to convince the Turks, Greece's traditional enemies, to pay a visit to "our old city." (Thessaloniki was part of the Ottoman Empire until 1912.) Since Boutaris's trip to Istanbul, Turkish Airlines resumed direct flights between the two cities, and the number of Turkish tourists has doubled within the last year. Tourism is an important source of revenue for Thessaloniki, where unemployment is at 25 percent.

But Boutaris can boast of his biggest successes in the reorganization of the city administration. Boutaris is voluntarily doing what Europeans have been demanding of the rest of Greece for the last two years with each new loan agreement, and what is now supposed to be achieved through international assistance: He is trying to make his city function more effectively.

In his first week as mayor, Boutaris hired an auditor. It was a novelty, and not just for Thessaloniki. "Now we know exactly how poor we are," he says. The city now has a budget and an accounting system, and all expenditures are carefully monitored -- not exactly a given in Greece.

'The City Was Rotten'

Thessaloniki's deputy mayor, Spiros Pengas, 43, is sitting in a café in the Museum of Byzantine Culture next to the city hall. "If the crisis hadn't happened, we wouldn't have made it," he says. "The city was rotten."

Thessaloniki was always seen as a stronghold of the conservatives and nationalists. Hellenization was pursued with particular zeal in the region, which was considered the "gateway to the Balkans" and was home to many different ethnic groups, which did not necessarily get along. The conservative New Democracy party controlled city hall for 24 years, holding the city hostage with its cronies.

During the election campaign, the local archbishop refused to allow Boutaris to kiss the cross during mass, even imposing an excommunication of sorts on the candidate: "As long as I am in office, you will not see the inside of city hall." A television crew recorded the incident, and when the footage was aired even conservative citizens were outraged over the archbishop's audacity. "People wanted change. They realized that things couldn't go on that way," says Pengas. Under Boutaris's predecessor, €51.4 million ($68.4 million) had suddenly and inexplicably disappeared from the city budget. No one knew what had happened to the money. A former prefect is now under investigation in the case.

Pengas, who studied political science in Munich, also never intended to be a politician. "I felt that there was too much of a divide between German theory and Greek practice," he says. Boutaris convinced him to change his mind and go into politics. His team includes many people like Pengas. They are young, most of them only half as old as Boutaris, and their roots are not in politics. One member of his staff was an analyst with the Bank of Greece, while another worked for a management consulting firm.

Boutaris presents a stark contrast to his predecessors. This is partly because he doesn't hide the fact that his life hasn't always been perfect. Boutaris is a professed alcoholic, after having been a heavy drinker for 10 years. Each year, in addition to his birthday, he celebrates the day he stopped drinking. He has been dry for 21 years now. He was once divorced, for seven years, and then he remarried his ex-wife. For Orthodox Greece, all of this unconcealed life experience is unusual. When his wife died in 2007, he had a unicorn tattooed onto his forearm, in remembrance of her "remarkable spirit." When he had decided that it was time to stop mourning his dead wife, he had a lizard tattooed on the back of his hand, a creature whose habit of molting was meant to remind him that change is in the nature of things.

Perhaps it is the constant view of the gecko on his hand that motivates him to take on issues that others have given up as hopeless long ago.

For instance, Boutaris has hired a personnel manager to evaluate civil servants and their work. French administrative experts, working on behalf of the EU's Task Force for Greece, are trying to implement the principle of performance-oriented work in the public sector throughout Greece. They are making little progress in the face of considerable resistance.

In Thessaloniki, Vassilis Kappas, 42, addresses reforms in the city administration. He says: "We have almost 5,000 employees here, but we only need 3,000." According to Kappas, many have never learned to work. In the past, voting for the right candidate was enough to receive a lifelong job as a civil servant. Cronyism had deprived the political system of its effectiveness. Kappas has developed a plan that reduces the number of directorates in city hall from 32 to 20. The city council is scheduled to vote on the proposal soon.

"Crazy things were going on here," like a system of fictitious overtime, says Kappas. Most city employees had accumulated hundreds of hours of overtime, but they had never documented the details. Now there is a cap on the number of possible overtime hours and how much employees can be paid for them. The success of the new rules is reflected in the city's expenditures, which dropped by 30 percent in 2011. The budget deficit, which normally doubled every year, shrank for the first time -- by 7.5 percent.

The mayor's opponents in the city council attacked him for his trip to Germany, while the Athens daily newspaper Kathimerini questioned his sanity for soliciting advice from the Germans, of all people.

But Boutaris also intends to ask officials in other countries how they dispose of their garbage and manage their ports. No one can repair or improve a broken system, he says. "It has to be discarded, and something else has to take its place," says Boutaris.

He takes a drag from his unfiltered cigarette. Speaking in a voice as raspy as Janis Joplin's, he says that everyone has to understand this fact -- both the citizens of Thessaloniki and all Greeks.