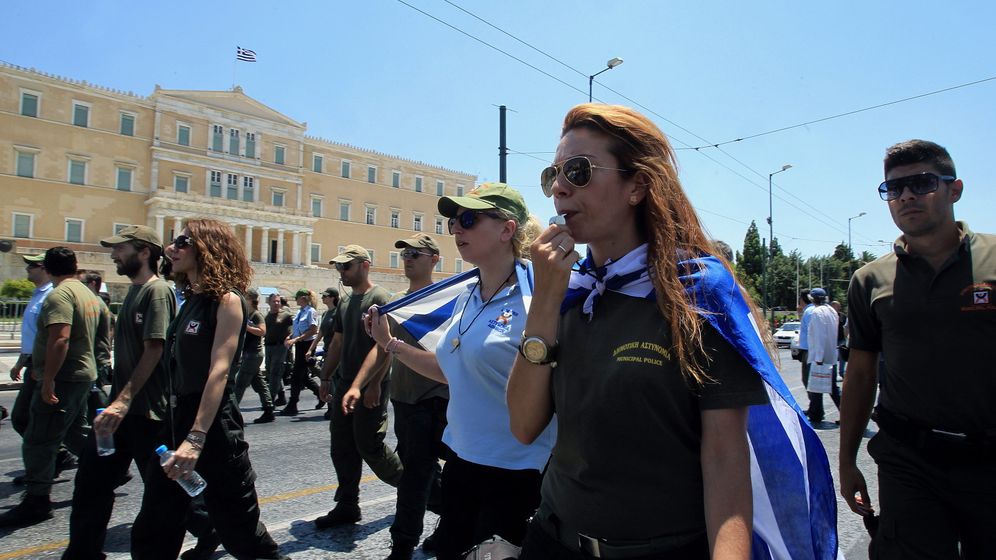 Photo Gallery: Anger and Despair on the Streets of Athens

After making a lot of money manufacturing swimming pools, Stelios Stavridis has redirected his entrepreneurial talents toward saving his country.

The 66-year-old Greek business executive with aristocratic features recently became the head of the country's privatization agency, which has been charged with selling off hundreds of government-owned real estate, companies, marinas and airports.

Stavridis is the third man to hold the position in only a year, but this doesn't reduce his professional confidence. He says he has just had "excellent" conversations with observers from the so-called troika, consisting of the International Monetary Fund (IMF), the European Commission and the European Central Bank (ECB), who regularly review the country's progress.

However, Stavridis also had to confess to the troika that his agency is unlikely to meet its goals for this year. The planned sale of the national gas company to the Russian Gazprom conglomerate fell apart at the last minute, and now a €652 million ($839 million) deal for the privatization of gambling company OPAP is also on the rocks, because the buyer feels that he is being cheated.

This means Stavridis will almost certainly fail to reach his original 2013 privatization goal of €2.6 billion. Because of these and other difficulties, the financing plan for Greece now faces a large shortfall of €11.1 billion by 2015.

Yet Another Debt Haircut?

Greece's euro partners have already pledged more than €230 billion in aid, and government spending has also been slashed by dozens of billions. Representatives of Greek business are now convinced that the country cannot survive without yet another debt haircut.

The subject is politically sensitive, especially in Germany, because this time a debt haircut would also affect public creditors, which already hold 80 percent of Greek sovereign debt. In other words, a large share of German assistance loans would be irretrievably lost.

German Chancellor Angela Merkel is still strongly opposed to a debt haircut, fearing that Greece's enthusiasm over reforms will vanish once financial pressure subsides. The country needs more than money alone to get back on its feet. Even the IMF is critical of the devastating effects of austerity programs on the country's economy. But that is only half the truth. The fact is that while Greece has drastically cut spending, efforts at structural reform are stagnating. This also hampers economic success.

When the troika observers first arrived in the country in 2010, they were surprised at just how overregulated the economy was, at how inefficient the entire government and judicial apparatus had become. Not even the estimated government deficit for 2009 was correct. When it was recalculated, 6 percent turned into 12.7 percent and eventually even went up to 15.6 percent.

Six austerity programs later, the deficit is expected to decline to about 4 percent for this year. Greece's euro partners attribute this success to the efforts of conservative Prime Minister Antonis Samaras. "The current government is finally strongly committed to bringing order to the state," says Panos Carvounis, a representative of the European Commission in Athens. "Things are moving."

According to Carvounis, the country finally has a complete picture of its revenues and expenditures, and Samaras has made progress with reforms of the healthcare system. The labor market has also been radically reformed. Greece's costly multi-employer collective bargaining agreements are now history, and the rules governing settlement payments to laid-off workers are no longer as stringent as they used to be.

This spring, because of these successes, it seemed that the country was out of the woods. Unit labor costs, seen as an indicator of a country's competitiveness, had declined by 10 percent compared to 2007, thanks to the easing of labor market regulations. Major corporations like Unilever, Philip Morris and Hewlett-Packard were announcing substantial investment plans.

During a visit to Beijing, Samaras overconfidently touted what he called his "Greek success story."

But what outsiders see as successful reforms come at the expense of ordinary Greeks. A few hundred meters from the office of EU representative Carvounis, a retiree shot himself to death last year because of financial problems. Surveys show that household income has plunged by almost 40 percent since the crisis began. Some 64 percent of young people are unemployed, and the healthcare system, after several rounds of austerity cuts, is on the verge of collapse. In many public hospitals, patients have to pay for their own bandages and swabs, while relatives are called upon to care for them, because of a shortage of nurses.

'Our Political System is Toxic'

In light of such conditions, the troika has often proposed that the wealthy be required to play a stronger role in financing the government. But even the Samaras administration shies away from challenging their influential lobbying groups. Greek ship owners, for instance, the country's most powerful business group, contribute little to the country's recovery. In fact, their ample revenues from shipping are tax-exempt.

"Our political system is toxic," says Antigone Lyberaki, 54, an economics professor at Panteion University in Athens. According to Lyberaki, the government apparatus and economic structure were destroyed by decades in which bribes and political relationships were more important than performance.

Over the years, powerful lobbying groups were able to secure privileges that they are now fiercely defending. For instance, when the government sought to eliminate overpriced licenses for truck drivers, the drivers shut down traffic throughout the country, and the military had to be brought in to bring supplies to hospitals.

It was only one of hundreds of bitter conflicts over the gradual liberalization of Greece's utterly overregulated economy.

An Uphill Battle to Reform

In the bloated administration, for example, many civil servants owe their jobs to political favors rather than to their own competency. Even Prime Minister Samaras awarded senior government positions to several supporters from his home district of Messinia after taking office.

By 2015, the government bureaucracy is required to shrink by 150,000 jobs, and another 15,000 civil servants are to be replaced by young, well-qualified candidates. But the government has long shied away from layoffs.

Instead, the government promoted early retirement programs and placed 2,000 civil servants into a so-called mobility reserve. Athens had promised the troika that the workers would be permanently laid off if no new jobs could be found for them within a year. But the government managed to find work for everyone in the mobility reserve, and a promised search for another 12,500 civil servants for the program petered out. Men like Odysseas Drivalas are the reason for this reluctance. The tanned former civil servant is the president of ADEDY, the umbrella trade union for civil servants. As the head of a union serving about 400,000 members, he thinks it is a "myth" that the government has too many employees. "We are planning another general strike soon," he says.

Men like Drivalas ought to be involved in the reform process, but chances of that are slim. Many union members support the leftist Coalition of the Radical Left, or SYRIZA, whose leader, Alexis Tsipras, warns against turning Greece into a "German colony."

The sometimes ludicrous conditions in Greece's government agencies are one of the main reasons the economy is doing so poorly. In one example, a fast-track process introduced in 2010 was intended to help entrepreneurs obtain all the permits they needed within 60 days, which was later changed to 45 days. But three of four major investors that completed this procedure are still fighting for their projects today.

"They overestimated the speed at which such reforms could be done," says Paul Mylonas, chief economist at the National Bank of Greece. Most of all, the reformers probably underestimated the old system's powers of resistance.

There is no shortage of ideas about how to move the country forward. Economist Mylonas, for example, is convinced that there is significant room for expansion in the shipping-related service sector, especially in areas like "logistics, insurance and storage." EU representative Carvounis wants the tourism industry to focus more on visitors interested in culture and mountain biking. The country, he says, is "almost empty for six months" every year.

But these are the kinds of plans that require a long time to implement. "Ninety percent of our companies are only three to five people," says Mylonas. "We cannot be competitive on this basis."

These conditions make the troika's forecasts for future development seem delusional. It expects the country to generate 3.5 percent growth in 2017, while the national debt is forecast to decline from 175 percent of GDP today to "substantially below" 110 percent by 2022.

Even chief privatizer and professional optimist Stavridis admits that he and his fellow Greeks have "huge problems." But, he adds, "I am 100 percent certain that we will win."