For all of the uncertainty surrounding Greece's future in the euro zone and the mixed messages regarding the political and economic reform process in the country, the math is actually relatively simple. Current plans call for Greece's sovereign debt to drop to 120 percent of gross domestic product by 2020. But the country's debt load is 169 percent of GDP and it is expected to rise to 179 percent by the end of next year. In absolute terms, that is almost €350 billion ($451 billion).

Paying that down will require nothing short of an extended economic miracle in the Mediterranean country, an eventuality not looking terribly realistic following five years of economic shrinkage and a sixth on the horizon.

The other option? Another partial default. That, indeed, would seem to be the conclusion that Greece's main international creditors have come to. According to information received by SPIEGEL, representatives of the so-called troika -- made up of the European Central Bank, the European Commission and the International Monetary Fund -- proposed just such a debt haircut at a meeting last Thursday held in preparation for the next gathering of euro-zone finance ministers.

The proposal is not uncontroversial. At the beginning of this year, a similar debt relief plan resulted in just over €100 billion being shaved off of Greece's mountain of debt. But that money all came from private investors. This time around, public creditors would be involved, meaning that taxpayer money from those countries which have stood behind Greece would vanish off the books.

Not a Glowing Report

Several countries, including Germany, are opposed to such a plan, with representatives from a number of euro-zone member states saying they didn't want to write off the money they have loaned to Greece as emergency aid. The European Central Bank, which holds some €40 billion in Greek debt, would also not participate as the bank is not allowed to directly assist member states in such a manner.

Nevertheless, the ECB has said it is prepared to make available the profits it has earned from Greek sovereign bonds. The profits were generated by virtue of the fact that the ECB purchased its holdings of Greek bonds at below market rate, yet it receives the full return when those bonds mature.

The discussion over the debt haircut, however, is only one element of ongoing talks in Athens ahead of the troika's release of its next progress report. It is almost certain that the evaluation will come to the conclusion that Greece should receive the next tranche of aid money, worth €31.5 billion. Otherwise, the country would slide into uncontrolled bankruptcy by the end of next month. The money, however, may be put into an account that can be quickly blocked, so as to maintain pressure on Greece to continue down the reform path.

Still, it is not likely to be a glowing report. According to a draft report, Athens has only introduced 60 percent of the reforms demanded by the European Union. The paper notes that 20 percent of the requested reforms are currently under consideration. A further 150 measures have also been proposed, including loosening laws governing hiring and firing and those relating to minimum wage requirements.

The troika has already agreed to give Greece two extra years to meet its austerity goals, a delay that will likely result in a need for up to €30 billion in additional aid, according to the ECB and European Commission. The IMF believes the funding gap will be closer to €38 billion. The final troika report is to be presented no later than November 12. 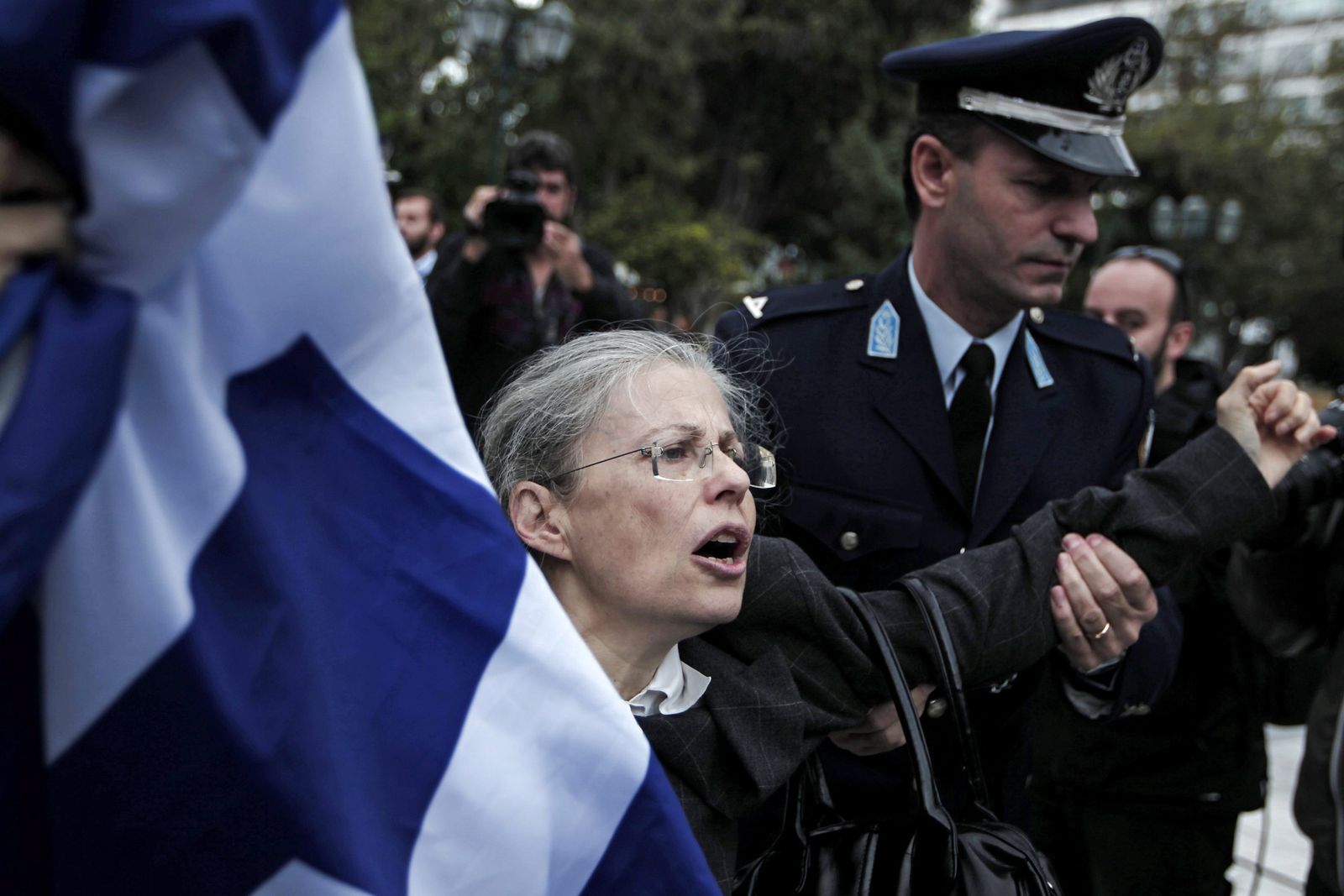 Police detain a woman at a weekend demonstration in Athens.