Alexis Tsipras, the leftist leader who could hold the whole of Europe to ransom if he wins the Greek election on June 17, breezed into Berlin on Tuesday to tell Germans they don't own the euro zone, and that they will endanger the whole currency block if they insist on stringent austerity for his recession-hit country.

The 37-year-old leader of the Radical Left party (Syriza), which came second in the May 6 election and is expected to emerge as the strongest political force in the repeat vote, reiterated his determination to abandon the radical budget cuts that were imposed on Greece in return for international aid -- a move EU leaders and German politicians in particular have warned could force Greece out of the euro.

The charismatic leader had visited Paris on Monday as part of a tour to convince a skeptical European public that he is not bent on wrecking the euro. In Berlin, he was hosted by Germany's opposition Left Party, which agreed a six-point program with Syriza calling for an end to austerity, taxes on banks and the rich and economic stimulus measures.

He didn't get an audience with Chancellor Angela Merkel. But his message to her, conveyed via more than 200 journalists packed into a building just a few hundred meters from her chancellery building, was loud and clear. He had no intention of "blackmailing" the German people, he said. But then he appeared to do just that, saying the bailout terms would have to be renegotiated, or else.

"There is only one path for Europe -- implementing our strategy," he said, speaking in Greek through an interpreter. "Mrs. Merkel recently said -- and I agree with her -- that if one country leaves the euro zone, the next day the financial markets will seek out other countries to evict. And there are countries that have much bigger deficits than Greece, such as Italy with €2 trillion in debts."

He said his party would work out a contingency plan for dealing with the "catastrophe" of a Greek exit from the single currency. But he added that he was committed to preventing that from happening.

'With Austerity, Greece Will Soon Need a Third Bailout'

"We all have a duty to prevent a catastrophe," he said. "The possibility of the dissolution of the euro zone is not a temporary storm, it would be a historic, very negative development for the entire world.

"If Syriza wins the election on June 17, it won't mean we will leave the euro, on the contrary it offers a big chance for us to save the euro. If the austerity continues, Greece will need a third bailout in a few months, and a further debt restructuring, and that could enforce a return to the national currency.

"We are proposing a way to save the euro. Our possible election victory offers the prospect of stabilizing Europe, not causing more instability as feared," Tsipras added.

But EU leaders beg to differ. Officially, euro zone governments say they're not talking about a Greek exit from the euro zone. But it's a different story behind closed doors. Finance ministers meeting in Brussels last week threatened to evict Greece if it broke its reform agreements, SPIEGEL has learned.

German Finance Minister Wolfgang Schäuble last week ruled out a renegotation of the strict terms of the €130-billion second bailout for Greece. "The Greeks can't have their cake and eat it too," Schäuble told German radio. "There is no comfortable way to solve Greece's problems. If Greece wants to remain in the euro zone -- and we all want that -- then that is the path that can help Greece," he said, referring to continued reforms and austerity measures linked to the bailout.

However, Germany has become increasingly isolated with its stance since Socialist François Hollande won the French presidential election this month. Hollande wants a greater focus on growth measures and last week made comments on Greece that appeared to oppose Germany's position. "I do appreciate the suffering the Greek people are going through today," Hollande told a news conference in Berlin on May 15 after his first meeting with Merkel. "The Greeks should know that we will reach out to them through measures to support growth to allow them to remain in the euro zone."

Hollande has also said he will propose the introduction of jointly-issued euro bonds -- a taboo for Merkel -- at an informal EU summit in Brussels on Wednesday. Italian Prime Minister Mario Monti is expected to back him.

Tsipras said fear of the aftermath of a Greek euro exit could spur Europe to rethink its position on austerity. "We hope and expect that people can become aware of their mistakes and make changes," he said. "Of course we have high hopes and expectations regarding this break of the German-French axis that followed the defeat of Nicolas Sarkozy in the French election.

"Issues the left had formulated a long time ago are now being discussed at the level of the G8, such as euro bonds and direct loans from the European Central Bank," said Tsipras, referring to Saturday's meeting of the group of eight leading economies at Camp David. "The fact that the G8 is talking about it is a big victory for the people of Europe."

The G8 on Saturday issued a bland communiqué about the need to balance growth with budget consolidation. But it was evident that Germany's partners believe that austerity isn't working, and that Europe must do far more to boost growth and job creation.

"I think the developments in Greece can provide momentum in this direction," said Tsipras.

He left no doubt that if he wins in June, Greece won't quit the euro without a fight. "The euro zone has no owners or landlords, we're not tenants in the euro zone, we're equal partners, and no one should take on the role as owners," he said, in another apparent swipe at Germany. "The treaty says no country can be evicted from the currency union.

"Austerity has evidently failed because Greek society has been destroyed, the production base has been dissolved. Our country has been in a deep recession for the fifth consecutive year, this has never happened in Europe in peacetime."

German taxpayers were having their money thrown "into a bottomless pit" in Greece, he said -- because bankers were getting most of it, and the Greek people weren't seeing any benefit.

"If we had had a different bailout program from the start that wasn't based on strict austerity but on growth and job creation, the Greeks could get back on their feet and pay back the debt," Tsipras said. "If you're giving a patient a drug that's making him worse the solution isn't to increase the dosage but to stop giving the drug.

"If the patient can't be cured the disease will spread to the whole of Europe and we all carry a historic responsibility to prevent this." 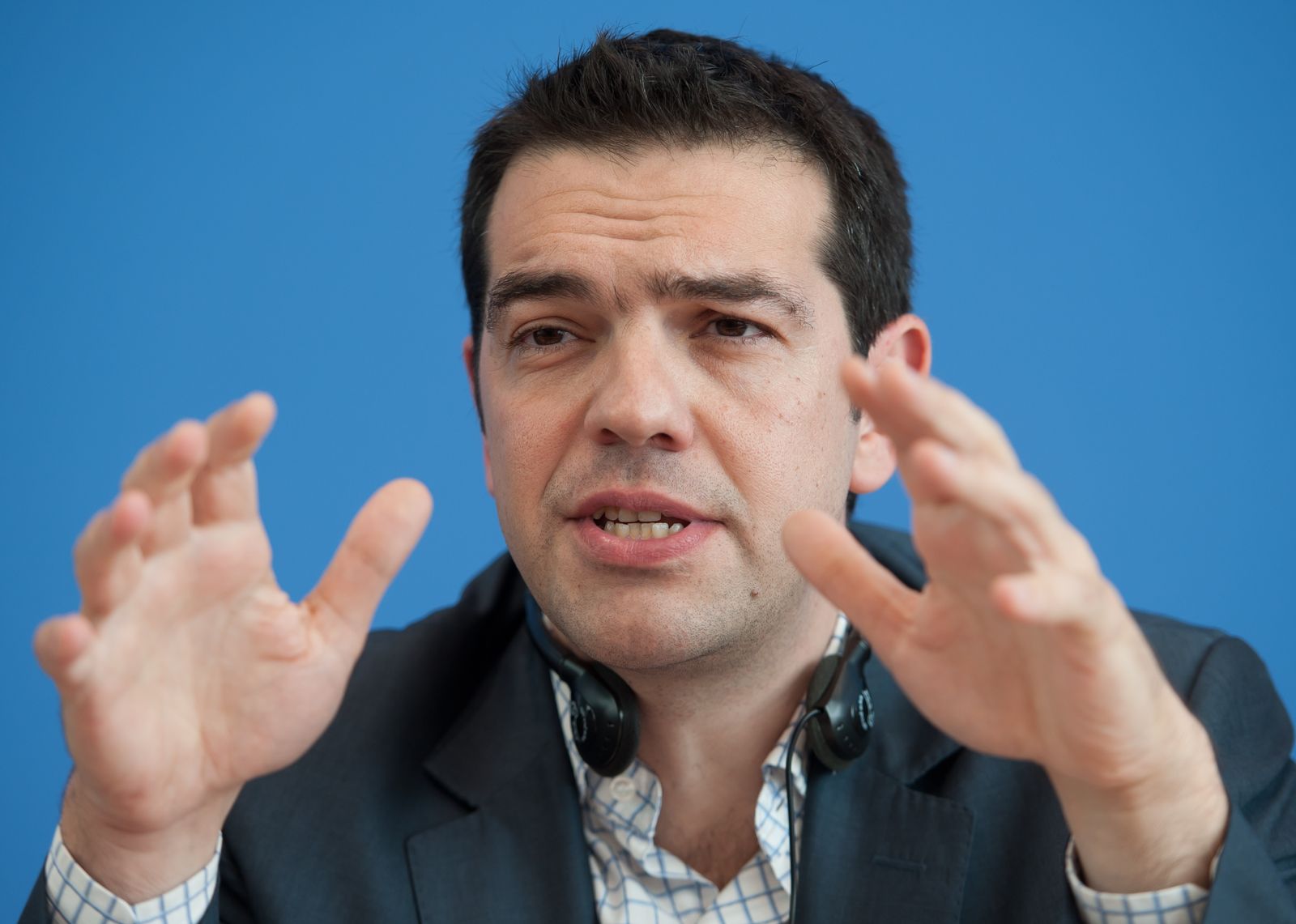 "We all have a duty to prevent a catastrophe," said Alexis Tsipras in Berlin.