Tsipras, the 37-year-old rising star in Greek politics, lays his Ray-Ban sunglasses on the table. It's Tuesday afternoon, and he looks exhausted. Indeed, he has a packed schedule: first Paris and then Berlin, where he met with Gregor Gysi and then with Jürgen Trittin and Sigmar Gabriel, senior officials in Germany's Left Party, Green Party and Social Democratic Party, respectively. Tsipras was the surprise victor when his Radical Left (Syriza) party took second place in May 6 general elections in Greece. Because leaders were unable to form a coalition government, a new election will be held on June 17. Most believe that Tsipras will attract even more votes in this second election.

Tsipras' tour through "Europe's two most important capital cities," as he put it, was primarily about cultivating his image. The civil engineer, already politically active in high school as a member of the Communist Youth of Greece, numbers among the strongest critics of the EU-International Monetary Fund (IMF) strategy for Greece, which calls for radical budget cuts and austerity in return for international aid. Should he win the June 17 election, Tsipras plans to ditch the terms of the bailout agreements struck with its creditors. On the campaign trail, one of his slogans has been that Greece is in danger of becoming a "German colony." But he toned things down in Berlin, saying: "We want to persuade, not blackmail."

SPIEGEL: Mr. Tsipras, is Berlin really as bad as you always say back home in Athens whenever you rail against theevil Germans?

Alexis Tsipras: Berlin is my favorite capital city in Europe. It's too bad that I'm always here only briefly. I'd like to have more time.

SPIEGEL: You might be Greece's prime minister the next time you come to Berlin. If that happens, will Greece still be a member of the euro zone?

Tsipras: Of course. We'll do everything we can so that Greece can retain the euro. We're trying to convince our European partners that it's also in their interest to finally lift the austerity diktat. We need policies that don't destroy the Greek economy but, rather, allow for renewed growth. If the austerity course isn't changed, it will result in the complete destruction of the Greek economy. That would indeed be a danger to the euro.

SPIEGEL: But even some parts of Syriza, the leftist alliance you lead and which came in second place in the May 6 election, have been calling openly for a return to the drachma.

Tsipras: That's only a minority. In each party, no matter whether big or small, there are different orientations, different opinions. Then there will be a vote, and the majority decides. What's more, this minority among us isn't in favor of an exit from the euro, for example; it just wants to ensure that Greece can also survive, with the help of another currency, for example, if others have completely ruined our national economy.

SPIEGEL: Which "others" do you mean? The Greek economy is already in a shambles.

Tsipras: What I mean by that is if our economic foundation is completely destroyed and the decisions of an elected Greek government are not responsible for it but, rather, certain political forces in Europe. Then they too will be guilty, for example Angela Merkel.

SPIEGEL: Are you seriously claiming that the reforms which Europe is demanding as a precondition for loan assistance are the reason for Greece's miserable situation?

Tsipras: If we are once again pushed and blackmailed into an austerity program that has so obviously failed, then it won't be long before Greece is in fact no longer capable of paying its creditors. The result will be a halt in payments, one into which we were practically forced. This would not only be dangerous for Greece, but for the entire European economy. These days, the financial systems of all countries are so closely intertwined with each other that one can't limit the crisis geographically. It's a problem of all countries and of all national economies.

SPIEGEL: If Greece ultimately exits the euro, you will also bear some of the blame. You promised your voters the impossible: retaining the euro while breaking Greece's agreements with the rest of Europe. How can such a plan find success?

Tsipras: I don't see any contradiction in that. We simply don't want the money of European citizens to vanish into a bottomless pit. The fact that there is financial assistance is the principle of European solidarity and a mark of being part of a community. That's good. But we think these resources should also be put to sensible use: for investments that can also generate prosperity. Only then will we in fact be able to pay back our debts.

Tsipras: That's not correct; we naturally also take a critical look at ourselves. We bear significant responsibility for our situation. We've accepted politicians who have destroyed our country's manufacturing base and created a corrupt state. We have elected the very people who have stashed their money away abroad and not only allowed tax evasion to occur, but also fostered it. Of course we are responsible for that; we allowed it all to happen. But we also have the responsibility to change exactly that right now.

SPIEGEL: Given your dependence on financial support and your rejection of vital structural reforms -- such as that of the public administration -- already agreed on, how do you propose doing so?

Tsipras: We're not opposed to reforms. We're only saying what so many economists, what many German newspapers and what even former German Chancellor Helmut Schmidt are saying -- and what the OECD has now reconfirmed in a study: The austerity policies we've been implementing for two years -- the policy of solely relying on drastic belt-tightening -- have failed. We now find ourselves in the fifth year of the recession. This year too, our economy will once again contract by at least 6 percent.

SPIEGEL: Is that the complete truth? Even Alekos Alavanos, your old mentor and the former Syriza floor leader in parliament, has called on you to finally be honest with your fellow Greeks.

Tsipras: Alavanos left the party some years ago because he didn't share our conviction about remaining within the euro zone. It's fairly odd that I now have to justify myself for the fact that we -- like the vast majority of the population, incidentally -- want to stay within the euro association.

The political reality is simple: The austerity programs, as constructed thus far, have failed, partly because they've been based on a false model, namely, that of domestic devaluation. But we're not an exporting country. It is much more the case that most of what we produce, we consume. Our ability to compete doesn't only depend on labor costs, as so many people say; they also depend on other parameters, such as the infrastructure and the mind-set of people and politicians. We really do long for a bit more meritocracy …

SPIEGEL: The concept of merit-based remuneration hasn't made it all that far in Greece. Instead, there's widespread corruption, cronyism and clientelism -- not exactly an advantage when it comes to competitiveness.

Tsipras: I am aware of the problems the Greek state has. It was systematically run down by the politicians of ours who were in power. And many Greeks share in the blame: They've supported this system; they've sustained it by continually electing the same politicians. But this can't be the cause of the crisis but, rather, at most it is a symptom. The financial and debt crisis isn't purely a Greek problem -- otherwise, there wouldn't be high government deficits in other countries, as well, such as in Italy, Spain, Portugal and Ireland. So there must be other causes. That's why we have to analyze the structure of the community, its architecture. Also that of our common currency, the euro.

SPIEGEL: Do you see in François Hollande, France's newly elected Socialist president, a new ally in the battle against the austerity diktat coming out of Germany?

Tsipras: Hollande is clearly a great white hope for us. Now, ideas and arguments that haven't been listened to will once again be heard and discussed, such as a stronger role for the European Central Bank or the introduction of euro bonds. We can't just treat symptoms, or we really will stumble over Greece. That doesn't help anyone. If our country exits the euro zone, all of Europe is in danger. We mustn't fool ourselves about that.

SPIEGEL: The most recent talks in Athens aimed at forming a government failed because you refused to join in any coalition. At the moment, opinion polls indicate that your Syriza alliance is running neck and neck with the conservative Nea Dimokratia (New Democracy) party. Who would you like to partner with after the new elections on June 17?

Tsipras: We would, of course, like to have a left-wing coalition. And we'll do everything we can to make things add up in our favor this time. 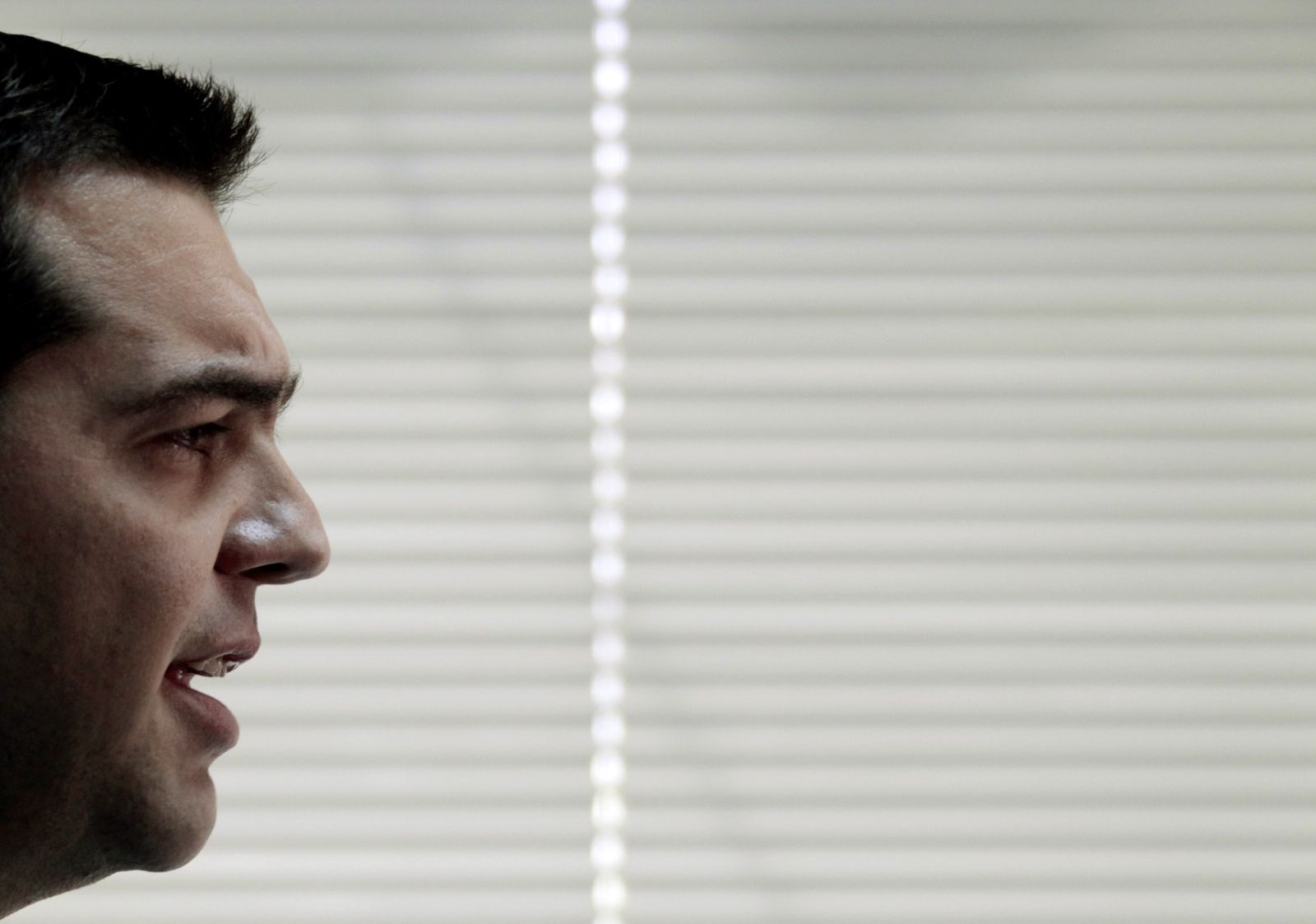 Syriza head Alexis Tsipras: "We'll do everything we can so that Greece can retain the euro."