The atmosphere was tense at the courtyard of the Thessaloniki city hall. Dozens of municipal workers in Greece's second-largest city staged a protest Monday morning against the planned lay-offs of 27,000 civil servants. "I have been working for the city for 22 years," said one of the city administration's 4,000 employees. He requested anonymity for fear of jeopardizing his position even further. "I fear for my job. All of us do."

A few hours later, city workers and journalists packed inside city hall to observe the city council meeting. The meeting ended with a decision to disobey the central government. Mayor Yiannis Boutaris had submitted the motion -- a refusal to send the Interior Ministry a list of workers ripe for dismissal. City administration and unions, so often enemies, were united.

Public sector lay-offs are a key condition set by Greece's international lenders for receiving further aid. Thousands of civil servants are to be placed on reserve for one year with reduced salaries. If they prove to have no useful function, or if they find work in the private sector, they lose their jobs. According to a report by the troika representing Greece's international public lenders comprised of the European Commission, the European Central Bank and the International Monetary Fund, 27,000 civil servants are to be placed into the mobility scheme over the next 12 months.

As SPIEGEL ONLINE reported earlier this week, the troika expects 2,000 public sector employees to be part of the scheme by the end of the year, and insists on concrete lists of people. Previous promises by the government to create a labor reserve failed miserably: While 15,000 employees should have been placed on reserve by the end of this year, fewer than 100 were transferred -- most of them part-time employees.

That resistance to shrinking the public sector is not going away. In a rare show of unity in Greece's infamously partisan politics and tense labor relations, both the national union of municipal employees, POE-OTA, and the Central Union of Municipalities, KEDE, have built up an anti-lay-off campaign. Starting on Monday, municipal workers occupied local government offices in Athens, Thessaloniki and other major cities. In some municipalities, protesters used wooden boards to seal off the personnel offices that hold the names of city workers.

Thessaloniki Mayor Yiannis Boutaris won accolades from the European Union and the press as a rare modernizer in Greece, yet he was among the first to rebel. "Both the government and the troika need to realize that such measures decapitate an already castrated local administration," he said at Monday's city council meeting.

Boutaris' position comes as a surprise to Nikolaos Tachiaos, a liberal politician who served as deputy mayor of Thessaloniki: "It is disappointing to see that even mayors like Boutaris who sponsor a modernizing agenda refuse to send the lists," he told SPIEGEL ONLINE. "Was it not Boutaris who said last year that the city of Thessaloniki can operate 'with half the staff?' The message they are sending is that there is a huge gap between words and actions in Greece."

The head of the Central Union of Municipalities, Kostas Askounis, says no other branch of government in Greece has done as much cost-cutting as the cities, and that any further cutbacks will give the fatal blow to already overstretched local authorities. "More than 3,500 staff have left since 2010," he said. "Do they want to totally destroy us? Who will teach children in municipal kindergartens? And was it not Angela Merkel who praised local authorities during her visit to Athens? How are we supposed to perform the 200 additional responsibilities the law gives to municipalities in 2013?"

Tachiaos is not convinced. He says local authorities were loaded with redundant and often unskilled employees as part of rampant cronyism in local administration in the 1980s and early 1990s.

"Municipalities would hire literally everybody who came knocking," he said. "The workers who are targeted for the reserve scheme are people with low skills, who took on permanent posts by the mayors through back channels. And they are the same people who booed the city council politicians who appointed them."

Rebellious Greek mayors are undeterred by the criticism. They could even go as far as submitting their resignations en masse -- an idea to be discussed and decided on at an upcoming union meeting. 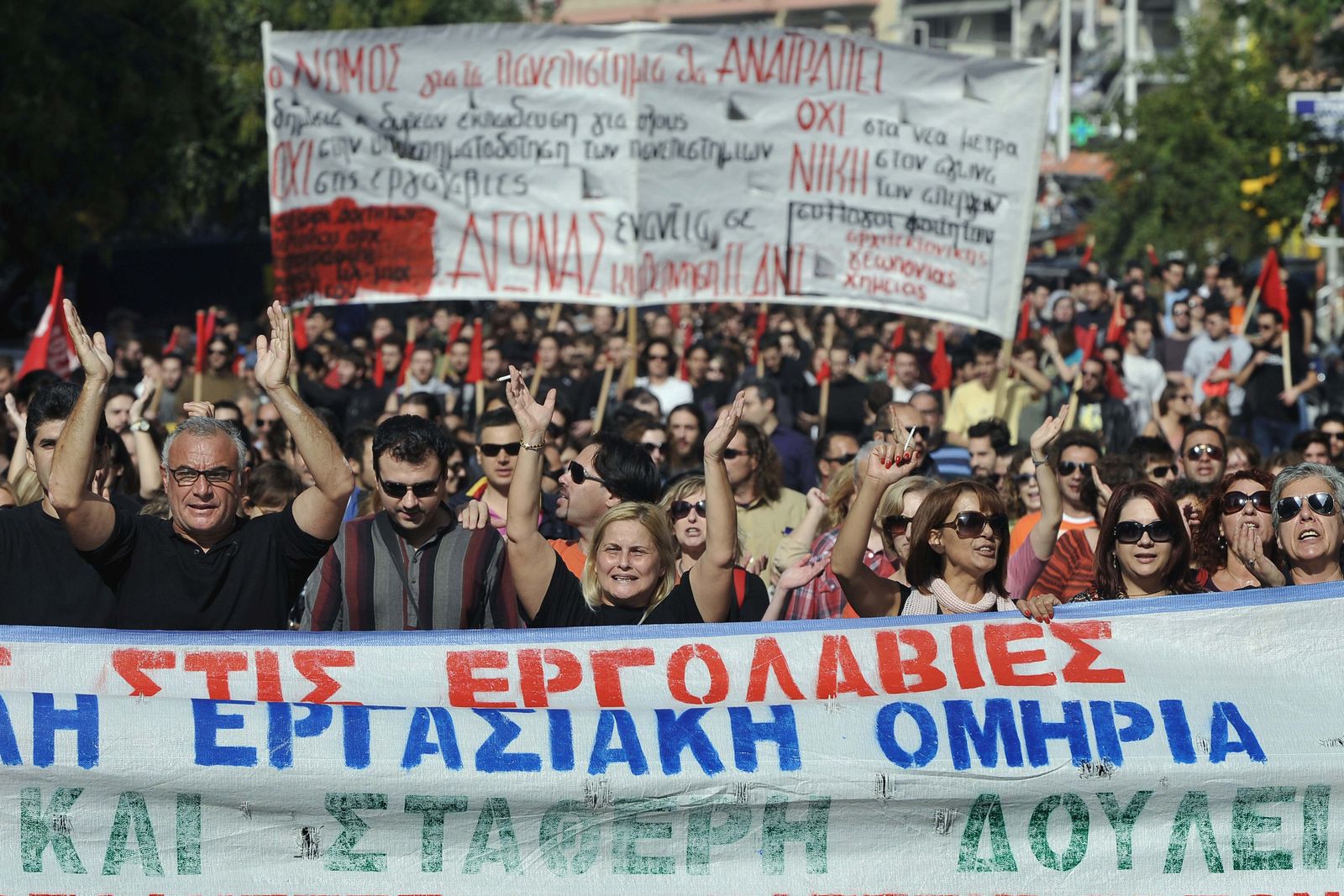 Greeks have been highly resistant to the austerity measures demanded by international creditors.