Just imagine: A country finds itself mired in an existential crisis and diametrically opposed political parties are tasked with putting together a government.

This is exactly the challenge Greece currently faces. The conservative Nea Dimokratia (New Democracy) and the socialist PASOK parties have tried in vain to convince the radical left-wing Syriza to join in forming a viable government. Every attempt at negotiation with the country's second-strongest party has failed, and Greece now faces a new election in June.

The biggest issue in the vote will be the question of whether the people of Greece want their country to continue implementing the strict austerity measures they agreed to in exchange for European Union and International Monetary Fund bailout money, or if they want to simply leave the euro zone.

SPIEGEL ONLINE invited representatives from two political camps in Greece that are the polar opposite of each other to debate the issue. Stefanos Manos, who leads the pro-business Drasi (Action) party, and Despoina Charalambidou, a member of parliament with the radical left-wing Syriza party, met over Skype to express their views.

Dressed in business attire, Manos logged in from his elegant Athens apartment, while Charalambidou connected from her office in one of Thessolaniki's working-class districts. The politicians argued bitterly, but were surprisingly united on several points.

SPIEGEL ONLINE: Ms. Charalambidou, Mr. Manos, some 80 percent of Greeks want to keep the euro. At the same time, there is a majority against the EU-imposed austerity measures. Would it be possible for Greece to remain in the euro zone if it reneged on its contracts with the European Union and the International Monetary Fund (IMF).

Manos: If tomorrow we were to say, "Hello, we want to take back our agreement," then we'd be out of the euro. We could of course try to change the austerity package and its conditions. But for that we need at least a primary surplus -- that is, a budgetary surplus after interest on loans has been deducted. To achieve this, we must first implement drastic reforms.

Charalambidou: In Syriza we say that the agreements with the so-called troika (of the European Commission, the European Central Bank and the International Monetary Fund) must be immediately dissolved. The bailout plan damns the Greek people to poverty, unemployment, and drives them to emigrate. The debts weren't created by simple workers and thus shouldn't be paid by them either. Not a single euro of the aid money will be used for salaries, pensions, the health system or education. The money is being used to stop up debt drains and pay loan sharks. The warning "austerity measures or the drachma" only serves to frighten the Greeks.

Manos: Ms. Charalambidou proves just how far apart wishes and reality are in Greece. The illegal mountain of debt of which Syriza speaks came about almost exclusively because Greeks have lived beyond their means. Only when we admit this can we begin to slowly rebuild our economy. If we denounce our obligations to our European helpers, then we are both deceiving and damaging ourselves. And then we'll be out of the euro and the European Union.

Charalambidou: But why should we always rely on the same creditors? We live in a globalized world and could get loans with better conditions from other partners. What about Russia and China, for example?

Manos: This is yet another case of wishful thinking. You wouldn't get a single ruble or yuan from either country before Greece implements reforms. Furthermore, with European help we're getting money at conditions the market would never grant. If we don't fulfill our austerity obligations, then not even Hugo Chavez will give us money ...

SPIEGEL ONLINE: ... the president of Venezuela. Still, the troika's tough savings strategy doesn't seem to be taking hold. Should it be altered?

Manos: Apart from interest payments, we must manage to bring in more than we spend. Then we can cut taxes, revoke agreements -- and do everything that Syriza head Alexis Tsipras and Ms. Charalambidou dream of. And how can we do this? By cutting back on everything that we don't need and doesn't do anything for us.

Charalambidou: I agree with you that we must first achieve order. But that doesn't change the fact that right now Greece has more than 1 million unemployed. I am one of them. In the last year I lost my job in the clothing industry. For one year I received unemployment benefits of €460 ($586) per month. Recently that was slashed to €360. I have desperately searched for work -- and there simply isn't any. My son moved to Germany after two years of looking for work without success. My daughter works part time -- 12 hours a week -- despite having a higher education and foreign language competency. You, Mr. Manos, along with the other backers of the austerity measures, are supporting the destruction of the lives of workers and pensioners, along with Greeks leaving the country and firms and shipping companies paying far too little in taxes.

Manos: I am aware that these are issues, but I also believe that I can better represent the interests of workers than Syriza leader Tsipras. Many of these problems have come about because the socialists didn't want to make cuts in the public sector. And Mr. Tsipras beats the same drum. The public sector is a monster that is devouring tax money. Meanwhile, small firms are being forced to shut down because they are paying too many taxes.

SPIEGEL ONLINE: Many people are now saying it makes no difference if Greece has the euro or the drachma if they are still poor and unemployed either way. They are citing economists who say Greece could improve its exports and get on its feet more quickly with the weaker drachma. What is your opinion?

Manos: If we leave the euro, everything will get worse. Greece would hardly be able to get more credit. Everything would get more expensive with the devaluation of the drachma. Think about it: Almost everything we consume is imported. And what do we have to export? We have always been weak in exports. We have lost our competitiveness, and that is the bitter truth. It is not enough -- as the troika urges -- for us to cut wages. Why are the Germans and Swiss doing so well? Because they produce desirable products. We have no top products. We need a change of culture, and these changes are the good things about the austerity policies.

Charalambidou: This is not about the euro for us. We are interested in making a dignified life possible for the people. We don't want Greece to revert back to the way it was in the 1960s, when people emigrated to Germany for a chance at a better future.

Manos: I agree with you 100 percent on this point. How do you plan to achieve this?

Charalambidou: We need tax equity -- especially when it comes to the taxing of shipping companies and rich businesspeople.

Manos: With Syriza, you have a realistic chance of getting into government. You should adjust your wishful thinking to reality.

SPIEGEL ONLINE: Would you bet that Greece will still be in the euro zone a year from now?

Manos: If Greece's people continue further down this path of denying reality, ruled by wishful thinking, then we'll be out of the euro within a year.

Charalambidou: I don't dare make a prediction here. We want a different Europe in which the people play the main role -- not the political and economic elites. 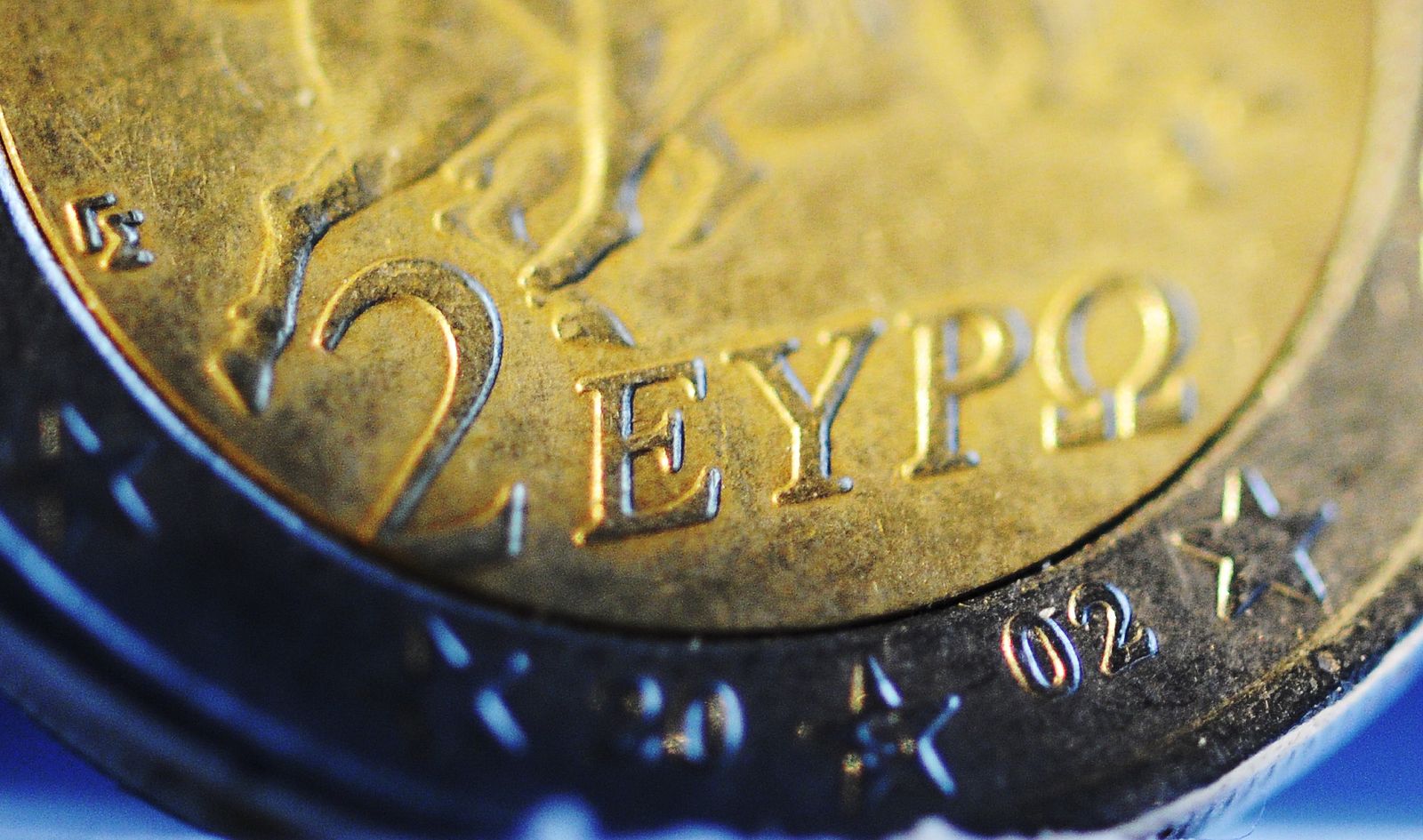 A Greek euro coin. Are the country's days as a member of the euro zone numbered?