Time is running out for Greece and its international creditors. If an agreement isn't found by June, the country will face insolvency. The new Greek president, Prokopis Pavlopoulos, has now told SPIEGEL ONLINE his views on the conflict: He rules out the possibility of a Grexit and promises that all the loans made to Greece will be paid back, but he is also critical of past austerity programs.

"Some of the measures imposed on us go beyond EU law," Pavlopoulos said to SPIEGEL ONLINE at his official residence in Athens. "We want to be equal members of Europe."

Among other things, the law professor feels that international lenders' criticisms of the minimum wage and other labor rights in his country are problematic. Pavlopoulos pointed out that in Germany, too, there is a minimum standard of living. "We are not asking for anything more than for the Greek people to enjoy what Germany's Constitutional Court considers as an established social right for the German people," Pavlopoulos said. He also claimed that parts of the austerity programs "were not at all growth friendly, but rather would lead the Greek economy to a recessionary course."

Pavlopoulos is a member of the conservative Nea Dimokratia party and has been in office since March. Earlier in his career, he served as an advisor to former Prime Minister Konstantinos Karamanlis, who led Greece as it transitioned from a military dictatorship to a European democracy. The comments mark the first time the new president has expressed his views on the euro debt dispute to any German media organization.

"Greece in the late 1970s fought a great battle to join Europe," the president noted. For him, he said, it was "not conceivable to see Greece outside of Europe." He also said that he views a Grexit, Greek's possible exit from the euro zone, as unthinkable. "The thought of Grexit does not even enter my mind," he said.

Although Greece is under tremendous financial stress, with the government now forcing hospitals, universities and public agencies to hand over their savings to the central bank. Pavlopoulos stated that his country would fulfill all of its obligations. "We pay everything we owe to the last euro," he said. "We need to keep a balanced budget and gradually decrease our debt." The president also expressed optimism that the dispute over Greece's debt can still be resolved. Pavlopoulos said negotiations for a new bailout program are "entering the home stretch."

After last week's meeting of the Euro Group once again failed to deliver an agreement, most EU politicians do not share this view. Pavlopoulos suspects a power shift to be part of the problem. "My view is that, increasingly, it is the technocrats who make the decisions and not the politicians," he said.

Pavlopoulos argues that Greece's accession to the EU was made possible in large parts by former German Chancellor Helmut Schmidt and former French President Valéry Giscard d'Estaing despite the reservations of the European Commission. He said the situation was similar when Greece later joined the euro zone. "I believe that, on, certain issues, Europe should sometimes operate on political decisions, bypassing technocrats, when the technocratic viewpoint is contrary to the grand, long-term goals of the EU," he said.

But unlike her predecessors, German Chancellor Angela Merkel now has to justify multibillion-euro bailout loans to Greece. In light of Greece's dramatic budget situation, Merkel and her Finance Minister Wolfgang Schäuble do not want to rely on vague reform promises. This has led many Greeks to view the German officials as dictating austerity.

Pavlopolous had criticized German policies in the crisis before he became president. In an essay, he accused Germany of placing political and economic interests above the greater goal of European integration. He also suspected that Angela Merkel lacks understanding for the European idea because of her roots in former East Germany.

In his new role, Pavlopoulos has adopted a more conciliatory tone toward Germany. "I believe they want a European Germany and not a Germanic Europe," he said of Merkel and Schäuble. He stressed the "very good" personal relations he had with Schäuble, who used to be his counterpart when Pavlopoulos was Greece's interior minister. Pavlopoulous added that, "I have always been a free thinker, I believe I can speak my mind freely addressing a country that I have great esteem and love for, like Germany."

The Greek president said he is also planning talks with his German counterpart Joachim Gauck. "I will expedite as soon as possible my visit to Germany," he said. Pavlopoulos said he also wants to use the visit to discuss the matter of German reparations payments for Nazi war crimes, which he has long supported. Gauck had asked forgiveness for German war crimes during a visit to Greece last year, athough he did not openly support the call for reparations.

Pavlopoulos called Gauck's statement a important one. But he added that both he and respected German legal experts consider Greece's claims to have "legal validity and it is also our right to use a legal process to satisfy them." He said the two countries should find a common forum to decide the issue, like the International Court of Justice in The Hague. "This is how civilized countries settle their differences," he said.

At the same time, Pavlopoulos clearly denied threats from other Greek politicians to confiscate propery in Greece owned by the German state. "Let me stress that no reasonable person in Greece is thinking about Greece taking unilateral actions," he commented. The Greek president said the seizure of German property was not a consideration. "Such talk is nonsense," he said. Pavlopolous also said he would be open to the idea of a trust fund through which Greek Nazi victims could receive individual compensation. "In principle, this is something we can discuss."

Prokopis Pavlopoulos, 64, has served as the president of Greece since March. His election was backed by the leftist Syriza alliance as well as conservative political parties. Pavlopoulos studied constitutional and administrative law in Paris and has taught as a professor at the University of Athens. He has been an advisor to several conservative Greek prime ministers and has occupied senior posts in a number of Greek governments, including stints as government spokesperson and interior minister. He is seen as a champion of the EU project. 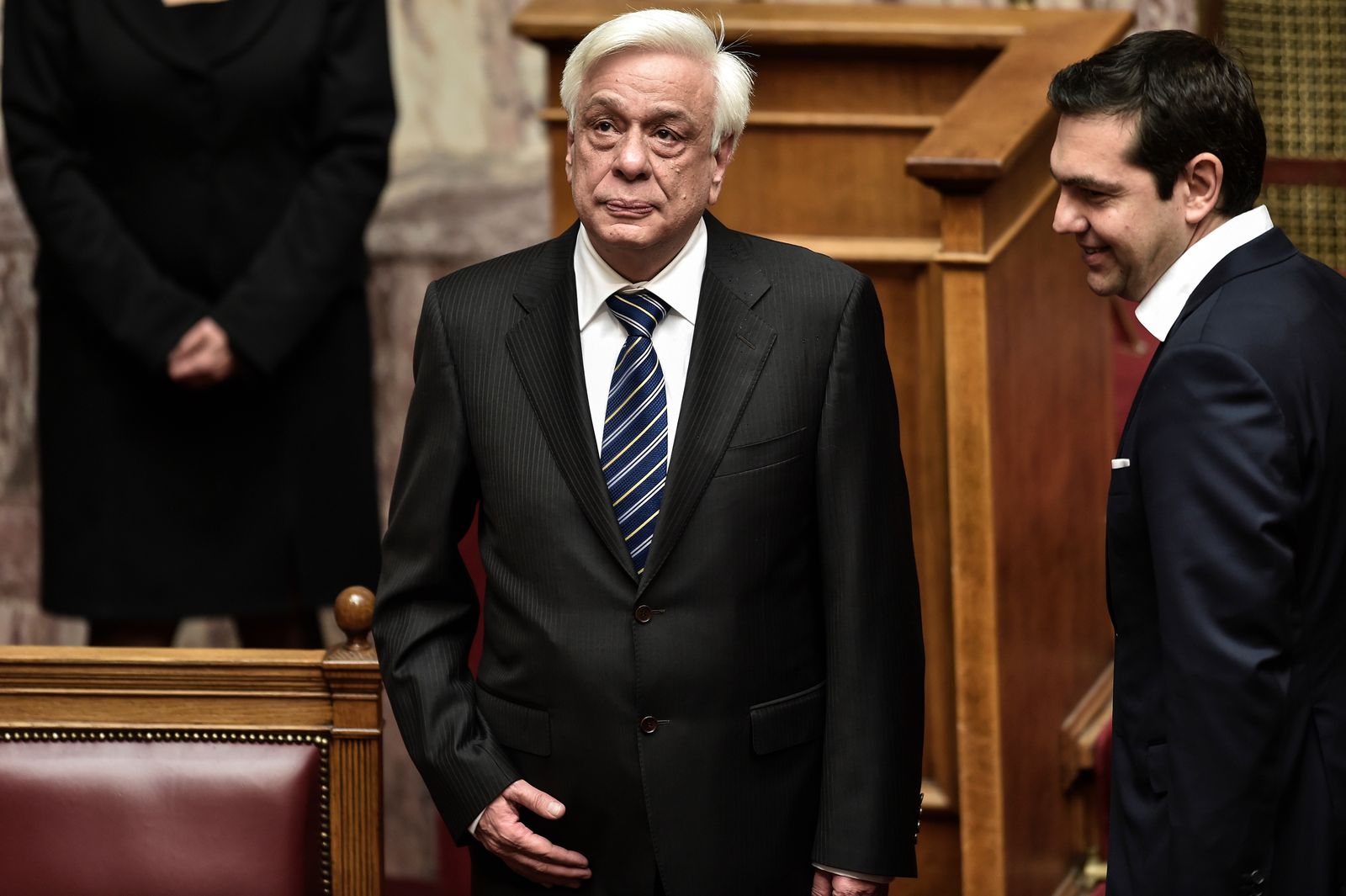 Greek President Pavlopoulos and Greek Prime Minister Alexis Tsipras: "My view is that, increasingly, it is the technocrats who make the decisions and not the politicians." 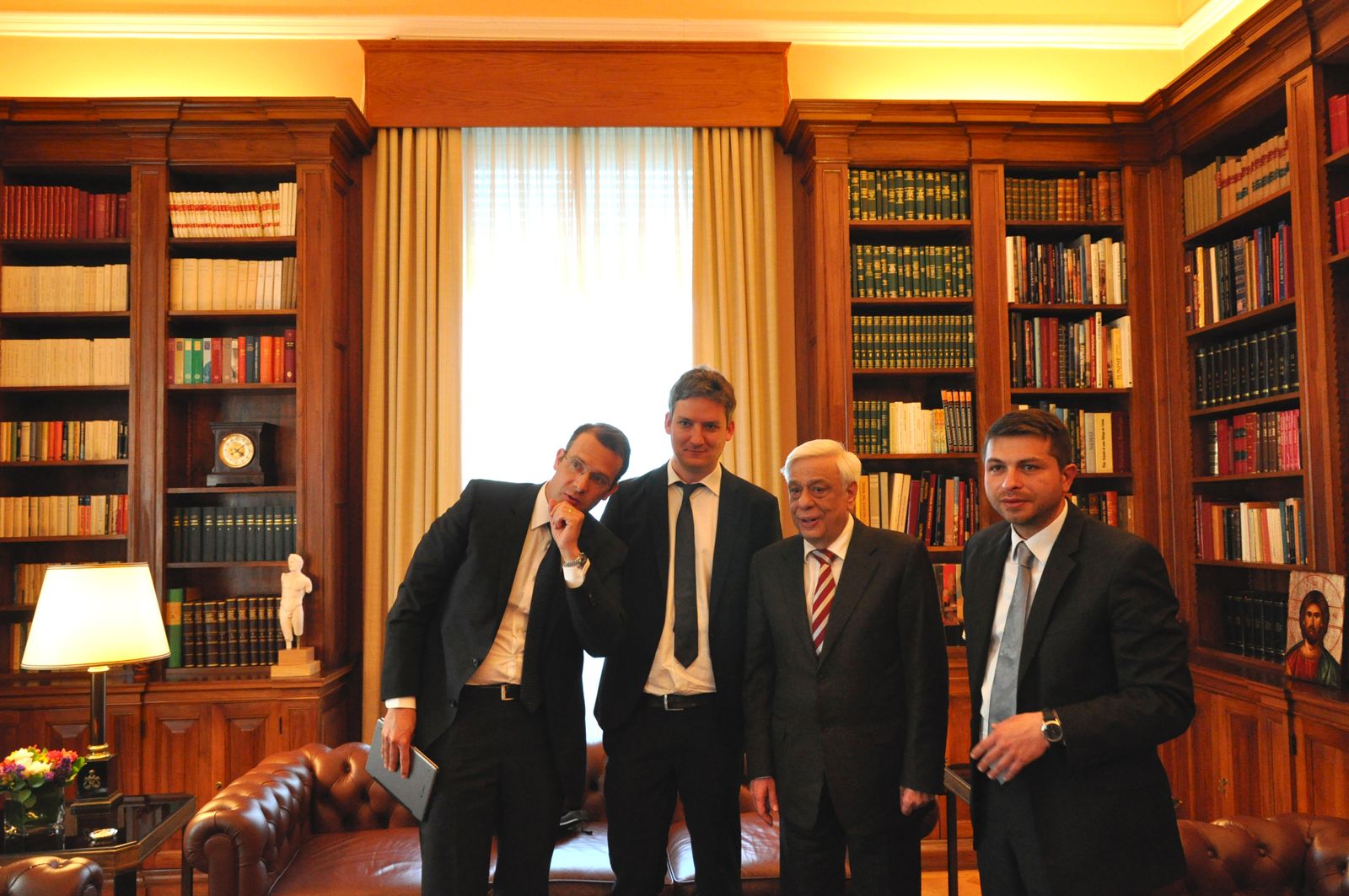