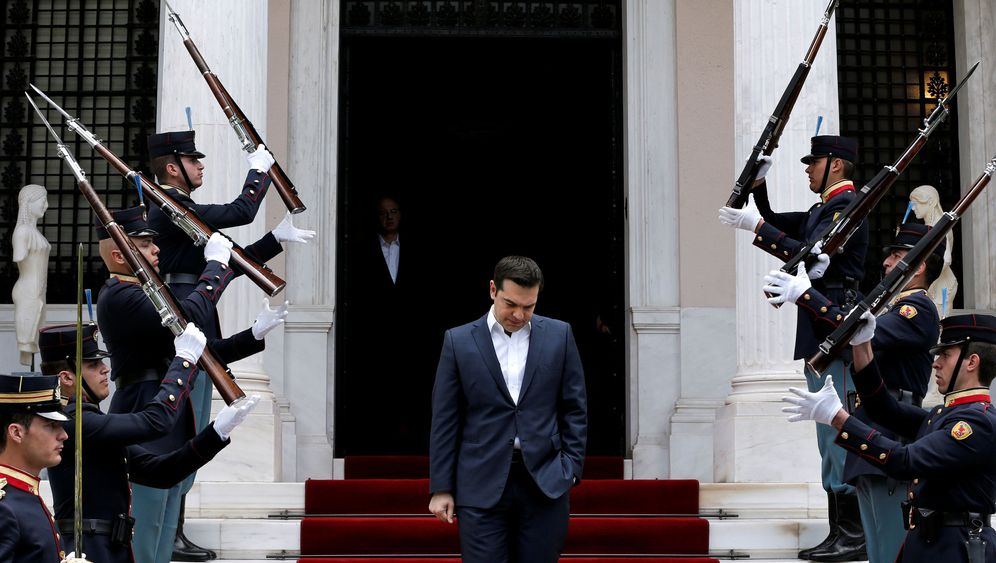 The neighborhood around Villa Maximos could be out of a fairy tale: There's an avenue lined with bitter orange trees in front of Alexis Tsipras' official residence, and the National Garden, with benches for couples, is located just next door. It has been reported that the Greek prime minister and his cabinet used to take calm strolls here. After his victory in early 2015, Tsipras had ordered that security barriers in front of parliament be torn down. "We don't need a police state," he announced. In other words: the 11 million Greeks who love us will take care of our security.

Today, 21 months later, the neighborhood has changed. Two riot police buses now seal the avenue leading to Villa Maximos. Officers stand watch in front of it around the clock.

The people's love of Tsipras has turned into anger. Because of their diminishing salaries, air-traffic controllers, doctors and teachers are standing up to the government. About four weeks ago, retirees tried to topple the police buses, their faces full of anger and disappointment. When police officers drove the seniors back with tear gas, an outcry swept across the country: Hadn't Tsipras promised that things like this would never happen again, they asked?

Alexis Tsipras, the rebel, and his left-wing Syriza Party took power in January 2015 with the purpose of ending the austerity program and giving the Greeks their dignity back. He wanted to negotiate a reduction in Greece's debts and he called for an end to austerity policies. After his election, people danced in the streets.

In the time that has lapsed since, however, Tsipras has broken most of his promises. In August 2015, he accepted a third relief program from the creditors, and received billions in exchange for Greek spending cuts. Now he's raising taxes, cutting pensions, selling airports and ports. The Greek economy is still in dire straits, the unemployment rate is at 24 percent and further savings measures are still to come.

At the last EU summit in late October, Tsipras sought to obtain debt-relief measures, though didn't succeed. But on the domestic front, he desperately needs a success.

According to a poll that, of all places, appeared in Avgi, the Syriza party's own newspaper, 90 percent of Greeks are unhappy with the government's work. Even leading Syriza politicians are already predicting the next political crisis.

So where has Tsipras led his country? Is he a traitor or a tragic hero trapped in government policies dictated by the creditors?

Many Sides to Please

Answers were supposed to come at a party conference two weeks ago in southern Athens. About 3,000 Syriza delegates assembled in the hall, hoping to experience the new Tsipras. The prime minister went on stage at 8:25 p.m. Tsipras didn't seem tired, his tone was calm, his posture straight. He addressed his audience as "comrades." And then he tried to portray his defeats as victories.

He claimed that this past summer it had been a "difficult but necessary decision" to continue cooperating with Brussels and sign the third aid package. A withdrawal from the eurozone, he said, would have been the worse alternative. "Grexit was and is not a progressive plan," he said. As a result, despite all of his pledges, he had been unable to end austerity policies in the country, he said.

Tsipras had, in fact, fought hard. His battle with the creditors briefly brought Greece to the edge of the abyss: At times, Greeks could only withdraw 60 euros per day from their bank accounts, and stun grenades flew in the country. During the referendum that followed, the Greeks clearly voted against further austerity measures -- but Tsipras put himself above the vote and accepted the aid program: 86 billion euros if Athens adhered to all the conditions. In order to allow a debate of his plan, Tsipras announced new elections in September 2015 -- and won again.

The generously inclined would argue that even for a politician, the kind of mutability shown by Tsipras would be unconventional. To satisfy disappointed voters, he is fighting to persuade creditors -- Germany in particular -- to ease Greece's debts. By the end of the year, he would like to see a decision in his favor.

Greece currently has debts totaling over 320 billion euros, which represents 183 percent of gross domestic product. It's unimaginable that the country will ever be able to pay back its debts. In order to improve conditions, creditors could, among other things, extend the periods of the loans. That's what Alexis Tsipras believes, and that might even be enough to calm voters.

But German Finance Minister Wolfgang Schäuble in particular has so far refused. He doesn't want to talk about debt relief before 2020, and definitely not before Germany's federal elections, which will likely take place in the fall of 2017. Every discussion weakens Athens' willingness to carry out reforms, he argues. The International Monetary Fund (IMF), which is despised in Athens because of its calls for tough reforms, is Tsipras' ally because officials there believe it is unrealistic that Greece will simply "grow out of its debts." Now the hope is that American President Barack Obama will step in to help when he visits Athens and Berlin in mid-November.

'Nothing Changes in this Country'

"After seven years of crisis, it's time that the people finally feel some relief," says Dimitris Papadimoulis. Few Syriza members are as familiar with the debt negotiations as the politician. Papadimoulis is a founding member of the party and one of the vice presidents of the EU Parliament. Anyone who wants to talk to him needs to walk through massive doors in one of the EU's offices in Athens -- it's like entering into a high-security wing.

The current aid program is scheduled to end in 2018. "By then Greece is supposed to be back on its feet again," says Papadimoulis. Given the current mountain of debt, however, few believe that will be possible. When asked what will happen if lenders refuse to negotiate, Papadimoulis responds, "Mr. Schäuble absolutely wants the IMF to be involved in the aid program. This means he will have to accept a compromise in terms of debt relief."

Still, debt relief alone will not suffice to lift Greece out of the crisis. What the country needs is investment. When Tsipras took over the government, he wanted to stop all privatization projects -- but he has since shifted positions and is now searching for investors, even though a number of his ministers are continuing to fight against privatizations.

Hellinikon, a former airport located in southern Athens, will soon be the site of casinos, restaurants, malls and hotels. The privatization is part of the aid program, and it is hoped that the around 8 billion euros in planned investments there will also create as many as 10,000 jobs. The airport is seen as a litmus test for whether Syriza is making foreign investment possible.

Odisseas Athanasiou, the clean-shaven head of Lamda, a Greek business whose parent company belongs to a Greek-Chinese-Arab consortium, welcomes guests in front of a model of his megaproject. Does he understand the critics who complain that Greece is simply selling off state property -- and that the meager revenues generated through these privatizations are simply flowing into the endless pit of debt? Of course, he explains, the site hadn't been expensive at 915 million euros, but "Greece should instead ask itself why we were the only bidder."

In the context of the sale, many Greeks see Tsipras throwing the country's treasures to foreign investors as the people continue to suffer. Maria Nikolaidou, a 41-year-old engineer and mother, hoped he would provide real change: "Next time I won't go vote, nothing changes in this country," she says.

Nikolaidou and her husband, likewise an engineer, are unable to go on vacation with their children and they are no longer saving for their retirement. There simply isn't enough money. Tsipras had a "clear mandate," Nikolaidou says, "to end austerity and the national degradation." She adds, "It broke my heart that he was just as weak against the creditors as his predecessor."

Alexis Tsipras can't seem to please anybody. At home, people complain about tough reforms, while outside the country, people deride Greece for not undertaking them quickly enough.

Panagiotis Lafazanis is one of the those who watched, firsthand, as Tsipras grew up politically -- and who no longer speaks with him. He sits in a meeting room near Omonia Square, in the offices of a new party he heads called Popular Unity. Lafazanis served as a minister under Tsipras until July 2015. A month later, he and 24 other lawmakers left the party in protest over Tsipras' decision to accept the third aid package.

"Tsipras made a mockery of our radical positions," says Lafazanis. "He betrayed the left-wing idea, and turned against everything he used to stand for." When Tsipras took power, Lafazanis says, he was still calling for a debt haircut. He argues that the debt relief Tsipras is currently seeking won't go far enough and that he is likely to meet a brick wall when it comes to creditors.

"The government is in a state of freefall," says Lafazanis, who believes snap elections will be called in the coming year. If, in the meantime, he should happen to run into Tsipras on the street, he says he will switch to the other sidewalk. "There's nothing left to say, from a political and from a human perspective."