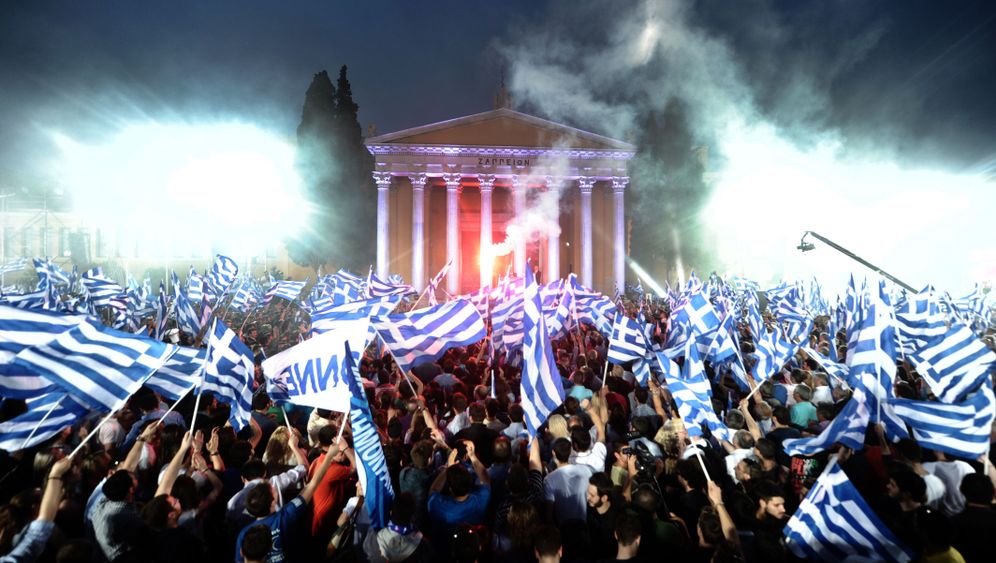 Photo Gallery: The Leading Candidates in the Greek Election

Aris Stefopoulou has had enough of Greece's political system and all its protagonists. "When you have such a ruling class, you don't need any other enemies," the 39-year-old high school teacher says.

Although there might not be any reliable forecast of the outcome of the Greek elections on Sunday, one thing can be said for sure: Disenchantment is a fairly widespread feeling in Greece these days. The main question to be posed on May 6 is how this displeasure will express itself.

For the first time, Stefopoulou will not cast his vote for either of the two major parties, the socialist PASOK party or the conservative Nea Dimokratia (New Democracy or ND) party. Instead, he will back a smaller splinter party. Whether it is left- or right-wing, he doesn't know. But it doesn't matter. Rather than casting a ballot based on principles, he is voting out of protest.

Stefopolou is standing in his garden in Akrata, a small city on the southern Peloponnese peninsula, gruffly pulling lemons off a tree. "I'm so sick of the same lies, the same song and dance," he says. "It's been decades already."

Even now, in the crisis, politicians still haven't come to their senses, he continues. "And how can they?" he asks, answering that it's all they know how to do.

Greece's ruling class is overwhelmingly made up of career politicians, and many of their parents were the same. Indeed, many of them have literally inherited their mandates.

Whether in Akrata or Athens, there is massive resentment throughout the country directed at the dynasties that have been dividing power among themselves in the country for decades.

Whoever thought or hoped that the crisis would abruptly alter the political landscape has learned something else in the shortest election season in the history of the Hellenic Republic: Old habits die hard.

Even outside of the two major traditional parties, it is overwhelmingly the same faces involved in the election. Sometimes they are wearing the garb of a new party; sometimes they have only issued new and more pointed slogans adapted to the circumstances.

Almost all of the would-be beacons of hope who so loudly pledge a different, better future have close ties to with the "old system" that helped launch their careers. Many also come with the old system's baggage: misgovernment, clientelism and corruption. Almost all have played a role in putting Greece where it is today.

Interim Prime Minister Loukas Papademos has called this election a choice of destiny that will determine "the future of Greece for the coming decades." But, given these circumstances, the tragic thing is that Greece actually doesn't have any good choice. It's no coincidence that "dilemma" is a Greek word.

Genuine Prospects Look Different Than This

Or they can vote for one of the numerous "anti-memorandum parties" both on the right and left of the political spectrum -- bodies that want to withdraw from the loan agreements that have been made with the country's creditors. As an alternative, these parties are offering things such as a debt moratorium, an exit from the EU and continuing along a well-worn path by taking out further loans. Genuine prospects look different than this.

The dilemma is also a Greek one because, even though most Greeks are opposed to the belt-tightening of the troika -- made up of representatives of the EU, IMF and European Central Bank charged with monitoring compliance with the austerity measures and structural reforms tied to the country's bailout loans -- almost the exact same number of them are committed to retaining the euro as the national currency. While the outcome of the election is uncertain, there is no question that it will have major implications for EU policies going forward as well as for the austerity course being championed by Germany.

To defend their bases of voter support -- or, better yet, what's left of them -- ND and PASOK have sent their most distinguished members into the race. The duel between ND's Antonis Samaras and PASOK's Evangelos Venizelos is also a bit of a charade in that both of the veteran professional politicians are trying to walk an almost impossible tight rope by suddenly claiming to stand for change and a break from the past.

Samaras has held three ministerial posts for ND over three decades, while Venizelos has held eight for PASOK since 1990. Now they have to wait and see if they can jointly secure at least 40 percent of the vote in this completely fractured party landscape. Doing so would allow them to form a coalition capable of governing and to keep the pledges they've made to international creditors.

Polls continue to put ND in the lead and, as its head, Samaras has been actively and perhaps ill-advisedly open about his pretensions to govern alone. In January, Samaras allowed himself to be celebrated as the future prime minister when polls put his support at 40 percent, but now that figure has dropped to 25.5 percent. He could still end up heading the government, but it's much more likely that he would do so as the head of a ND-PASOK coalition.

Samaras' falling number in the polls can probably be mainly attributed to his flip-flopping. Indeed, how are voters meant to understand how someone can vociferously lead the charge against the first bailout package for Greece and then simply approve the second one? Samaras merely answers the charge by saying, "One can't compare them with each other." Not surprisingly, he doesn't sound very convincing.

"He has made the biggest back-stepping in post-junta history, and now Samaras is Schäuble's pet child and the desired partner of PASOK," complains Panos Kammenos, referring to German Finance Minister Wolfgang Schäuble. Kammanos was once an ND minister, but now he heads the right-wing Independent Greeks party, a nationalist splinter group that is based on anti-German and anti-EU resentments and is predicted to win 11 percent of the vote. Many of those votes could be taken from Samaras, as Kammanos has won over a number of voters with moves such as calling for an entry ban into Greece against IMF mission chief Poul Thomsen. "Listening to Samaras' campaign speeches, one would think there had never been a crisis," writes the Athens daily Kathimerini.

"I say no to new taxes, no to pension cuts," Samaras has repeatedly said, for example. In doing so, he is being true to form as "Mr. Ochi," or "Mr. No," as the international press once dubbed him for having long rejected every compromise while George Papandreou was prime minister and he was the opposition leader.

"I have always known that the troika's recipe is no good," Samaras now says from the podium. But he still signed it. Indeed, it is precisely this sort of flip-flopping on issues that has given him a reputation for being a power-hungry opportunist.

Even with its debt haircut, Greece is still on the hook for €320 billion. The economy is now in its fifth year of recession, and unemployment is higher than it has been since the 1970s. No end to this downward spiral is in sight.

Even so, politicians -- whether on the left or the right, from parties small or large -- are pretending to be alchemists. "Greece is rich," some can be heard shouting into the bullhorns. "We have natural resources, sun, wind," they say, arguing that the country's large wealth is simply not being correctly exploited.

And that's precisely the crux of the matter. Of course, there is the constant complaining about how pro-growth measures need to be introduced and the country needs to become more competitive. But, if there's one thing this election season has shown, it's that, beyond these complaints, there are few if any ideas about how all of that could look in concrete terms.

Sure, people say that Greece could become a pioneer in alternative energy. But how's that supposed to happen? To reach the same level as Germany, for example, the country would first have to pump trillions of euros into R&D and infrastructure.

Empty campaign promises are by no means a uniquely Greek phenomenon. But a reality check could turn out to be even more disillusioning here than elsewhere.

As things stand, a quarter of all Greeks are still undecided about whom they will vote for.