For all the hullabaloo and vehement rejection by many of my compatriots of what is considered the "Germanification of Greece" (under the pretense of saving the country from bankruptcy), Greeks are showing increasing signs of not only becoming more like the Germans, but also of enjoying the transformation.

There is not a single Greek who hasn't poked fun at the archetypal German shopper, who, as the anecdote goes, visits his local supermarket and buys one slice of watermelon and exactly four tomatoes. In pre-crisis Greece, such behavior, especially in food shopping, would be frowned upon and considered a source of great embarrassment. The average Greek would go out of his way to avoid demonstrating any kind of thrift, even in the cases of households where four tomatoes would make much more sense than two kilos of tomatoes that may ultimately end up in the garbage.

Since the early 80s, Greeks were conditioned to favor as a role model the luxurious living of the ancient Sybarites of Magna Graecia over the Germanic lifestyle of the ancient Spartans: an apparent hallmark of progress which signalled an end to the deprivation that had been the hallmark of long stretches of modern Greek history.

Consumption became the major source of self-esteem for Greeks, who were spurred on by the expansionary policies of socialist leader Andreas Papandreou. He famously doubled the salaries of public employees after being elected. The trend continued with inflows of EU cohesion funds, which intensified the global economic boom of the 90s.

The development culminated during the first decade of the twenty-first century, when cheap credit flooded Greece after the introduction of the euro and led to such banking products as those now nostalgically remembered by credit starved Greeks as "sea-loans" (i.e. private loans to pay for fancy vacations). Spending had become part of our national identity -- and the major pillar of an economy that owed its "economic miracle" to private and public consumption.

How times have changed. Consumption was thrown off its pedestal by the crisis, with Greeks increasingly subscribing to the value of Germanic thrift. According to recent polls, more than eight out of 10 Greeks have cut down their private spending and turned to cheaper products. Taverns are empty on Saturday nights, more and more people have started using wood for heating, car sales have dwindled dramatically and cafeterias, bars and restaurants that used to charge astronomical prices (€6 for a cup of coffee) are now offering "happy hours," periods of reduced prices and other incentives to lure customers.

It is no coincidence that one of the most successful commercials currently on Greek TV (ironically by the German retailer Media Markt) uses the following catchphrase: "There is a such thing as a free lunch."

One could counter that for hundreds of thousands of Greeks, the unemployed, the poor, the ones who have been devastated by the crisis, cutting back on spending is a necessary evil rather than a sign of transformed mentality. But conspicuous consumption is currently rejected even by those Greeks who are still in a position to spend. To them, heavy consumption is -- to paraphrase Talleyrand's disapproving remark on the execution of the Duke of Enghien -- worse than a mistake: it is a faux pas.

Nowadays, people who make purchases they would have gloated about to friends and relatives back in the pre-crisis era, go to great lengths to explain their sin, usually by downplaying the cost ("I got this new flat-screen TV with a 50 percent discount and a bonus toaster!"). It is also increasingly considered a cardinal sin to buy fancy things (I know of someone who hides his recently purchased iMac computer whenever he is expecting visitors).

Middle-class people have no problem queuing outside discount stores they would not have deigned to give a second look pre-crisis, and I recently saw a well-dressed man feeling quite comfortable with two sacks of potatoes on his shoulders -- one of the many Greeks enjoying the dramatic drop in the price of the vegetable after producers and consumers decided to get rid of middlemen in what Greeks now call "the potato movement."

People also take a sense of pride in demonstrating to others how the crisis has affected them, and many social gatherings in Greece would now remind filmgoers of a memorable scene from Richard Curtis's Notting Hill, in which the protagonists are having a "misery contest" over dinner, with the one producing the saddest act winning the prize of the last brownie.

So the German-inspired troika treatment might have been ineffective in salvaging the wreckage of the Greek economy, but it has been more influential on our mentality.

I vividly remember my discussion with a German minister in Berlin a year ago. When I suggested that perhaps Germany should take measures to stimulate private consumption in order to boost the economies of the periphery, he told me that such an effort would be futile.

"Even if you raise the salaries of the Germans, their private spending will remain a flatline," he explained. One would be inclined to wonder what will happen to Europe if its population of spenders is decimated and only producers survive. Who will play the part of the consumer? Here's hoping the Chinese will keep up their love of Mercedes and BMWs and can overcome their lactose intolerance to become diehard fans of feta cheese. 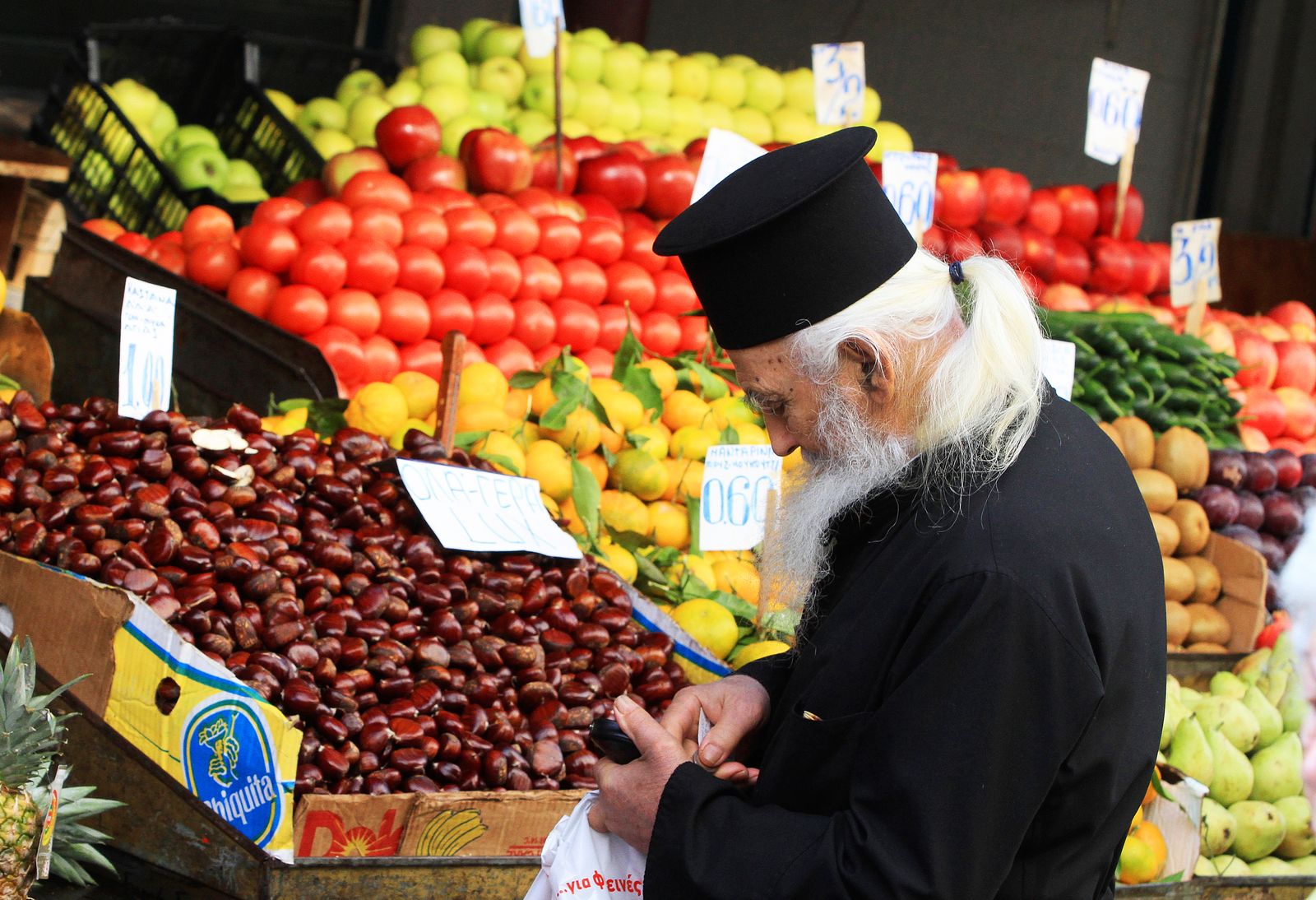 An Orthodox priest shopping in Athens. Formerly it was only the Germans that rationed their groceries.