Joanna Stavropoulos is not proud of what she has done. "I had a guilty conscience when I withdrew my money from Greece," says the 43-year-old. Of course she knew what would happen if everybody does the same: Greece's banks would be threatened with collapse. But she says she had to think of her two-month-old daughter, Josephina, who is currently asleep on Joanna's shoulder.

Increasing numbers of Greeks are following Joanna Stavropoulos' example and emptying their accounts. They are afraid that Greece may leave the euro zone and return to the drachma.

Stavropoulos is one of the few people who know very well what this scenario would look like in concrete terms. As a journalist and NGO worker, she has traveled all over the world, most recently in Haiti and Iraq. "I have been to countries where banks closed," she says. She was in Argentina, for example, when the government declared a national default. She has also lived in Zimbabwe, where three-digit inflation destroyed the currency. Joanna is sure that Greece could face the same thing if it returns to the drachma. "My country is going downhill," she says.

There is still little sign of panic in Greece, and there has not been a stampede to the banks. Nevertheless, people are withdrawing hundreds of millions of euros from the banks every day. In May alone, outflows totaled €5 billion. According to official figures, €80 billion has been withdrawn since the start of the crisis.

Christiana (not her real name) can see the capital flight every day with her own eyes. The 46-year-old, who wishes to remain anonymous, works as an asset manager at a large Greek bank. "It's not just that it is increasing," she says of the withdrawals. It's not only major customers who have been taking out money in recent months, she explains, but all kinds of clients, from account holders with a few hundred euros to the bank's most important private customers. "Naturally, the wealthy ask particularly often what they should do with their money," she says.

Rich Greeks have long been moving billions to countries such as Italy or Switzerland, or buying luxury properties in London. But overall, according to estimates by the Greek central bank, only about one-fifth of the total money withdrawn has gone abroad. Many customers have left their money in the bank itself, Christiana says -- but in a safe deposit box rather than in their accounts. "It's currently impossible to find a free safe deposit box in a Greek bank," she says.

Those customers clearly don't want to be surprised by a currency reform. There has long been speculation over how that could work. The banks could close over a weekend, take stock of the euro holdings in their accounts and prevent further transfers to foreign accounts. Euro bills which are already in circulation would be marked with stamps. The export of unmarked bills would be prevented at the borders. Within a short time, the drachma could be reintroduced.

If it gets that far, Marianna's clients want to be prepared. Like Christiana, she also works as an asset consultant at a Greek bank, And like Christiana, she does not want her real name to be used. Her clients are lawyers, doctors or top managers. "On average, they have between €200,000 and €300,000, which they can withdraw at any time," Marianna says.

She has noticed the increasing capital flight during the last three months. Last year, her clients mainly moved their money to London or Cyprus. But now the latter country is also at risk of collapse itself because of its bloated banking sector. "Now they prefer Germany and Switzerland," she says.

Quite a few wealthy clients also tell Marianna that they are keeping their money at home. Many people are apparently doing the same thing. Greeks now have around €50 billion stashed at home, reports the Greek newspaper Ta Nea, citing the Greek Finance Ministry. Burglaries are increasing as a result. In Crete, they have gone up by 700 percent within two years. Burglars recently stole €50,000 in cash from a house of an old couple in Athens.

The crisis may now increase the social divide in Greece, just as it has done many times in recent years. While members of the upper class have long managed to stash their money in safe places, a possible currency reform and the subsequent devaluation would probably hit many low-income earners unprepared.

Even a cosmopolitan woman like Joanna Stavropoulous has been overwhelmed in her attempts to come up with the right strategy. In 2010, as the signs of Greece's economic crash intensified, she moved her savings to a Spanish bank. Then Spain's economy got into trouble. She moved her money back to Greece -- until the next bout of bad news. She has paid more than €100 ($125) in bank fees alone, she says, due to the constant movement of her money.

When her daughter was born, Stavropoulos paid €12,000 for the birth, a sum that is not considered unusual in private Greek clinics. Now, she has barely any money left. She has invested the last of her savings in foreign currency, hoping that they will hold their value if Greece returns to the drachma. 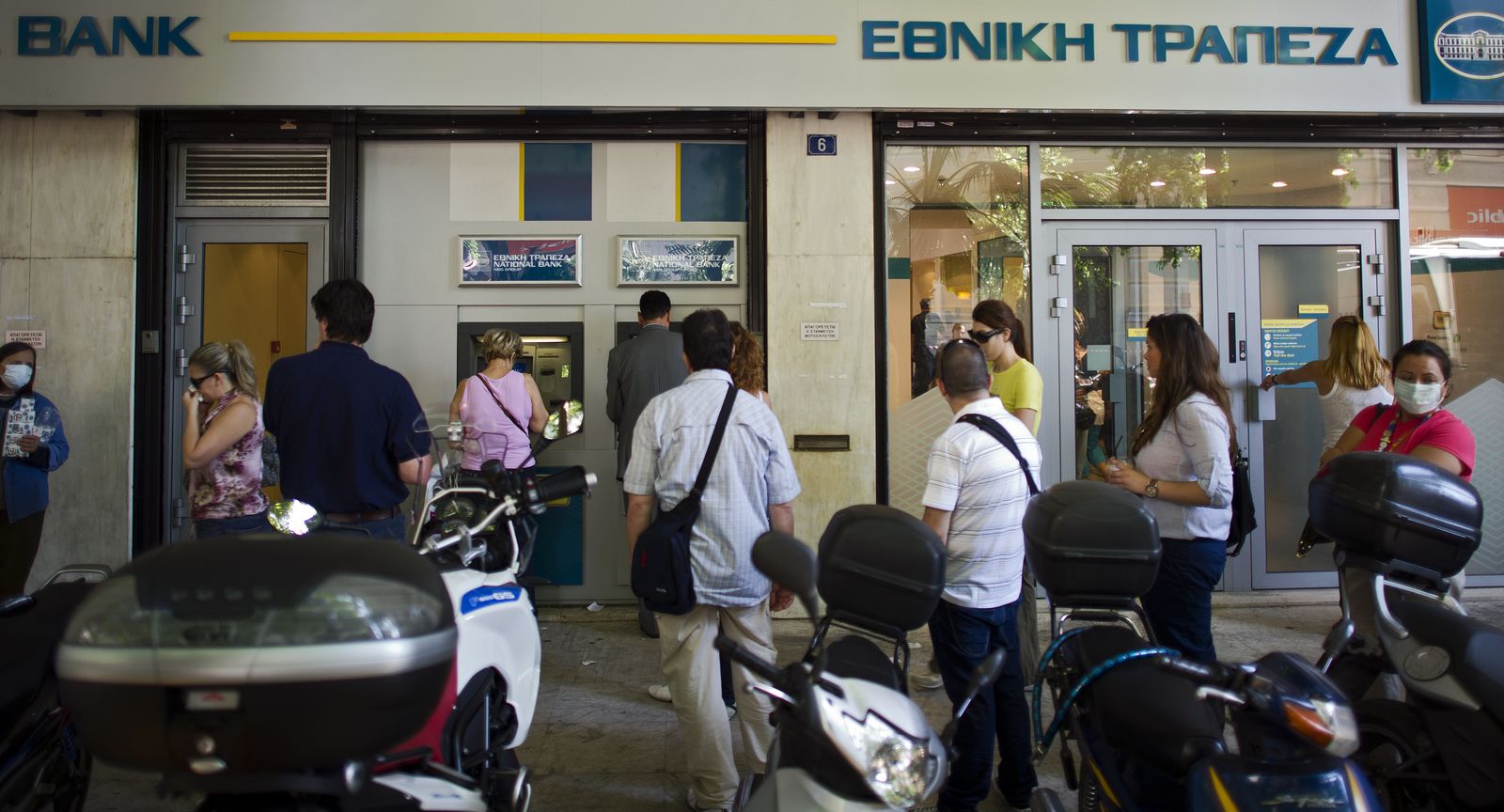 Greeks have already taken billions out of their bank accounts (June 2011 photo).