For a politician proud of his green credentials, it was a photo opportunity made in heaven. A forest of wind turbines reaching more than 35 kilometers (22 miles) into the distance, each one jutting 115 meters (380 feet) into the sky. Thanet, the world's biggest wind park, was opened at a site off the British coastline near Kent on Thursday.

British Energy Secretary Chris Huhne did not want to miss his big chance to witness the scene. The Liberal Democratic politician and Vattenfall chief Øystein Løseth took a boat from the port of Ramsgate out into the North Sea. The park, consisting of around 100 huge turbines, lies 12 kilometers (7.5 miles) off the coast.

The park has a capacity of 300 megawatts in optimal wind conditions, enough to power over 200,000 homes. That is significantly less than the energy produced by a nuclear power station, but the energy industry is still very excited about the launch. According to the industry association Renewable UK, Great Britain is now producing more offshore wind energy than the rest of the world combined.

Since 2008, the windy island has been the world's leading offshore energy provider. Thanks to Thanet, national output has risen by one-third. British wind farms in the North Sea and the Atlantic now have a capacity of 1,340 megawatts, compared to 1,100 megawatts in all other countries.

At the start of the year, the Labour government announced subsidies in the double-digit billions for offshore energy projects. The extra impetus was much needed because the United Kingdom seriously lags behind the rest of Europe when it comes to renewable energy. Only 6 percent of British electricity comes from sun, water and wind -- in Germany the figure is about three times as much. If they want to hit the European Union goal of producing 20 percent of the energy mix from renewable sources by 2020, then the British will need to make an effort to catch up soon.

But following the recent change of government, it is unclear as yet what will happen to the island's offshore aspirations. Environmental groups like Greenpeace fear that the Liberal-Conservative government will slash spending on renewables as part of its cost-cutting drive. The extent of any cuts will be made public on Oct. 20 when Chancellor George Osbourne announces the results of a government spending review.

Meanwhile, Energy Secretary Huhne underlined his support for wind energy at the Liberal Democrat party conference this week. "Forty miles from here, at Gwynt y Môr, they'll start building a new offshore wind farm next year, big enough to power a third of the homes in Wales," Huhne said. "I want to see this again and again round Britain's coasts."

According to Renewable UK, there is still a £60 million ($94 million) fund available, designed for the expansion of ports. Investors like Siemens have signalled their interest in an offshore investment once the necessary infrastructure is in place.

Offshore wind energy is seen as a silver bullet in Great Britain, even though it is a comparatively expensive energy form. The technical demands are far higher than for wind parks built on land. An investment costs at least €3.5 million ($4.7 million) per megawatt of energy capacity -- and that price is rising. In addition, the energy produced is far from constant. Because of the variable wind strength, one has to build three times the capacity one actually needs, according to Ian Parrett, analyst at the British energy consultancy Inenco.

So it is little wonder that the sector has suffered during the financial crisis. Many electricity providers have shied away from making big investments. During the first half of the year, US turbine manufacturer Clipper sold only 43 turbines, compared to 127 in the same period a year earlier. In order to survive, the firm has gone to its leading shareholder for help. And due to weak demand, another turbine manufacturer, the Danish company Vestas closed its factory on the Isle of Wight in England last year.

But experts still predict further growth for the market in Britain. Many projects are already being planned. Thanet will also soon lose its status as the world's biggest wind park. In 2012, the first 175 turbines from the London Array wind park are expected to link up to the national grid. With a final size of 340 turbines, this project, in the Thames Estuary, is going to be more than three times bigger than its little brother in Kent. 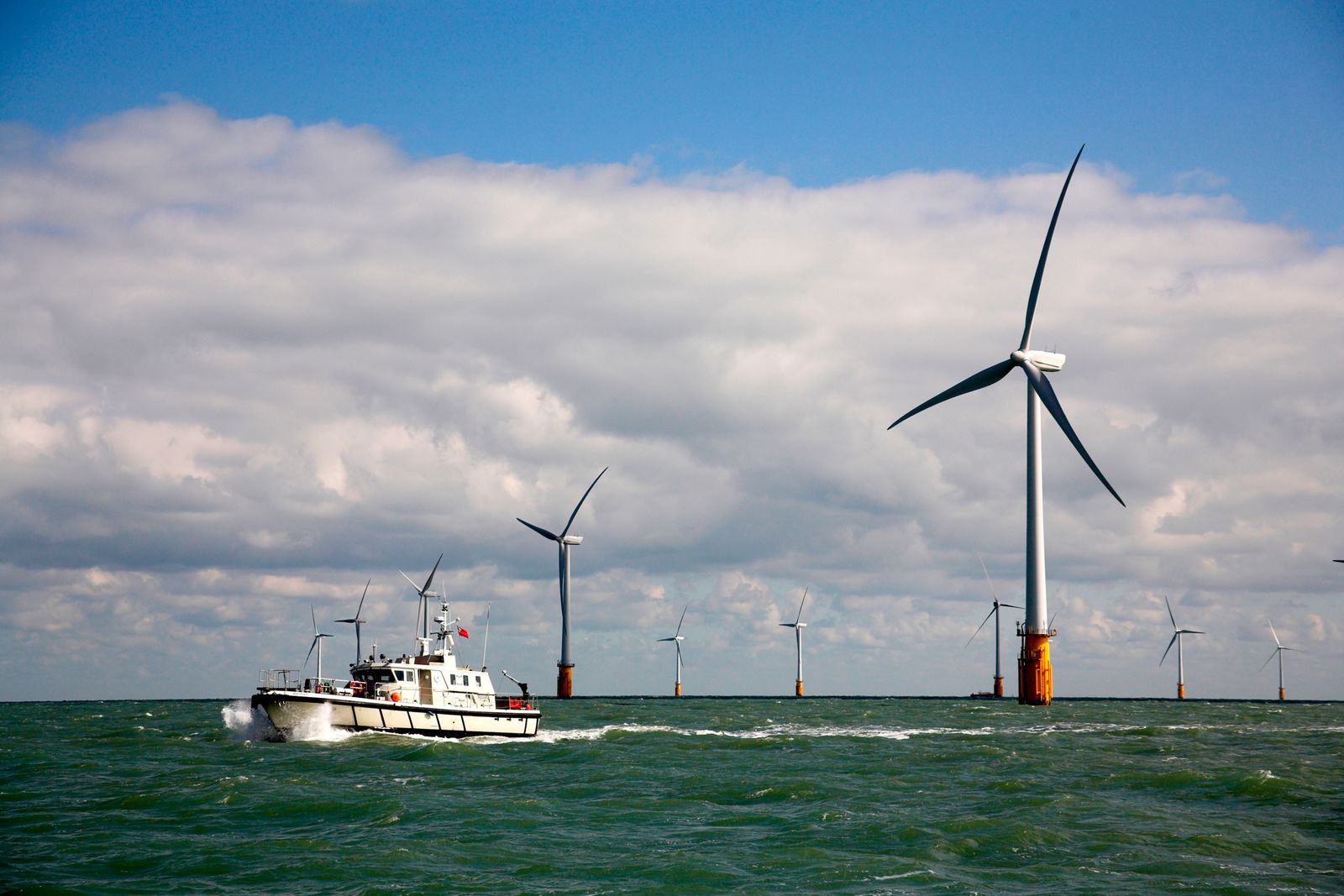 Vattenfall's Thanet Offshore Wind Farm, off the southeast coast of England, currently the largest offshore wind farm in the world.