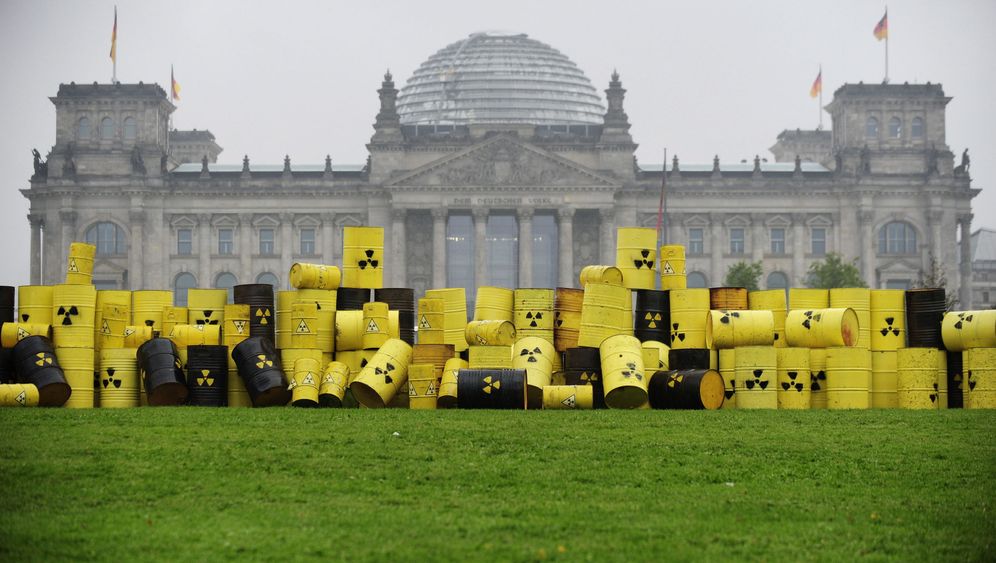 Photo Gallery: No Thanks to Nuclear Power

The helpers counting ballots in Brighton's Pavilion constituency spent eight hours completing their task, running into the early morning hours. It turned out the country had done more than just vote Labour Party Prime Minister Gordon Brown out of office -- that had been widely expected. It had also produced a major political surprise: Caroline Lucas, 49, became the first member of the British Green Party to land a seat in the country's parliament, the House of Commons.

The head of the Green Party of England and Wales, who was a member of the European Parliament for 10 years, scored a direct mandate in parliament representing a precinct that had long been a bastion of Labour Party supporters. "The people of Brighton Pavilion have made history," a jubilant Lucas said after her election. Commentators spoke of a "historic breakthrough" for the Greens.

Lucas, a trained journalist and mother of two sons, is a veteran supporter of Britain's anti-nuclear movement. The Green Party leader still fights for "a world without nuclear energy" today despite, or perhaps because of, climate change.

Her party's line is clear, as is the political relevance of that line. In national terms, only around one percent of voters gave the environmental activists their votes. Despite this, German pro-nuclear energy politicians, such as former Labor and Economics Minister Wolfgang Clement, a member of the Social Democratic Party (SPD), have recently taken more of an interest in Britain's Greens. Clement says on television talk shows these days that it was from the British Greens that he learned that "the problem of climate change cannot be tackled" without nuclear power. Appropriately, astonishment and alarm ensued.

It seems that Clement had not researched the subject adequately. Or that he had mistaken former Greenpeace director Stephen Tindale or futurist and environmentalist James Lovelock for party spokespeople. They see nuclear energy as an effective means in the fight against climate change. Only "fanatic Greens" would deny this, Lovelock has said. However these two are on their own, politically speaking, and risk being thrown out of their party.

The actual Green Party line couldn't be any more different. "Uneconomic, unsafe, unpopular and unnecessary" in the fight against global warming is what Lucas has written about nuclear energy. With that sentiment, she is in line with Europe's other Green parties. Nuclear energy doesn't fit into the plan for a sustainable future, German Green Party politician and anti-nuclear activist Rebecca Harms has said. "It is insanely expensive, with immense risks and the most poisonous trash of all time," Harms concludes.

But Is The Green Stance Having Any Effect?

Harms is the chairwoman of the Greens/European Free Alliance, the Green Party group in the European Parliament. As such she is tasked with uniting members of parliament from 14 countries, some of whom are not at all green on many issues. "But our 'no' to nuclear energy is undisputed," she says. This is why there will be many green-friendly protestors from neighboring countries among the tens of thousands who plan to converge on the German capital city of Berlin on Saturday to protest against the new policy by conservative German Chancellor Angela Merkel's government to postpone the phaseout of the country's 17 nuclear power stations by 12 years on average.

Among them will be representatives of the French Green party, Les Verts, and its smaller, more radical offshoot, Europe Ecologie. With their strict rejection of nuclear energy, the realists in Les Verts and the fundamentalist environmentalists in Europe Ecologie together rose to become France's third-strongest political force in regional elections earlier this year. Around a quarter of the French voted for them. Nonetheless, this has not changed France's role as an atomic energy superpower. With 58 reactors, France produces almost half of the electricity from nuclear energy produced in the European Union.

The Greens' situation in Finland is also relatively hopeless. After being outvoted in a 2002 vote to build the third reactor at the Olkiluoto facility, the then-environment minister, Satu Hassi of the Greens, resigned. Her party, then-part of the national government, walked out of the coalition as a result of the vote.

In the run-up to the next election, the environmentalist party didn't change its course, but its leaders did shift their strategy. The Greens have been back in power with the Center Party, the National Coalition and the Swedish People's Party of Finland since 2007. Today, the coalition is massively promoting the construction of new reactors, with the fifth due to come online in 2012 and two more reactors recently approved. Anything seems possible at the moment. The Green Party voted against the initiatives in parliament, but still remained loyal to the coalition government.

Hassi, who has since been sidelined from national politics to the European Parliament, continues to rail against nuclear power in her homeland. "Finland is becoming a test dummy for big European power companies and the nuclear industry," she says. Back home, though, the Green Party continues to stick with the government.

Elections for the national parliament this coming Sunday in Sweden will likely determine the future of nuclear power in that country. With support for her currently at around 34 percent, Swedish Green Party leader Maria Wetterstrand is the country's most popular politician after current Prime Minister Fredrik Reinfeldt. She is also ahead of Social Democratic leader Mona Sahlin, whom Wetterstrand would like to see unseat Reinfeldt.

For his part, Reinfeldt would like to approve the construction of up to 10 new nuclear reactors to replace an identical number of older ones at the same locations. With a slight majority, Reinfeldt's administration voted in June to overturn a non-binding referendum that took place in 1980 to phase out the country's 12 nuclear reactors by 2010.

The Greens' Wetterstrand has opposed the new legislation, saying that it "could mean Sweden will be making itself dependent on nuclear power for 100 more years and there will be 100,000 years of consequences for future generations who will have to take care of the waste." Her Green Party co-chairman, Peter Eriksson, says that Sweden should stay the course with its nuclear withdrawal. Sahlin has said that if the Social Democrats and Greens attract enough voters to form a government that they would like to return to the original phaseout plan.

Her preference would be to follow the example of the Austrians, who in 1999 voted for a second time to remain entirely nuclear power-free. "There is no safe way to utilize nuclear power," the Austrian Green Party argues. "A change of energy policy is the only sensible alternative."

Even among the new Eastern European members of the EU -- often better known for being oriented towards economic growth than for their environmentalism -- saying "no thanks" to nuclear power also seems to be part of the genetic code of the slowly burgeoning Green parties there. Polish environmentalists regularly make the pilgrimage to Gryfino, a city on the German-Polish border, to set up an inflatable power plant in protest in the town square. The Polish government is considering approving the construction of the country's first nuclear power plant there. Meanwhile, the Greens in Hungary are also united on the issue, despite a difficult generation change that has been happening within the party.

With such a united front in Europe, dissenting Greens must increasingly resort to rabid means to defend themselves. Chicco Testa, 58, long served as the head of the Italian environmental protection organization Legambiente and was one of the organizers of the "no" lobby during the Italian nuclear power referendum of 1987. Today he is the managing director of the Rothschild bank, sits on the boards of several Italian firms and is campaigning side-by-side with Italian Prime Minister Silvio Berlusconi to revoke the 1987 decision to close the country's last nuclear power reactor by 1990.

The Italian Nuclear Forum, a group established in July by industry, academics and government officials which is hoping to pave the way for construction of new nuclear power plants in the country, appointed Testa as its president. Italian geologist Mario Tozzi recently accused Testa of a conflict of interest, telling him on a TV talk show that he stood to profit from plans to build nuclear power plants. Testa's response to one of the men he once fought side-by-side with to rid Italy of nuclear power? "Don't you dare say that I profit from this, because I will smash your face in."