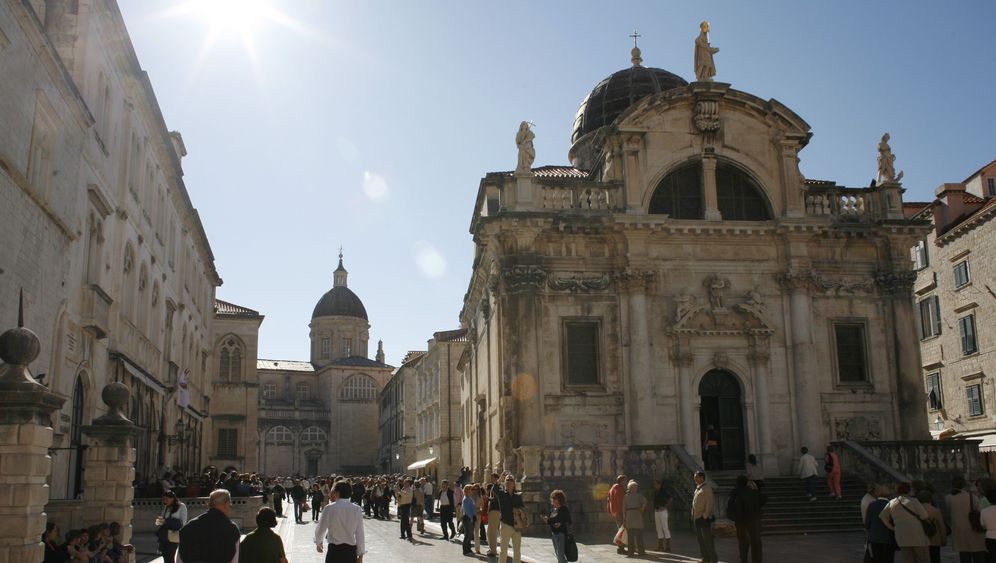 German discount supermarket chain Lidl is welcoming Croatia, the European Union's newest member, by slashing prices. Large billboards across the country read: "Welcome to a Union of low prices. More for you!" On the shelves, the company offers "permanent EU markdowns." Croatia's accession to the EU on July 1 is expected to practically pay for the bargain strategy. When the barriers on the border come down next week, 20 percent duties on EU products will also be eliminated.

Since their products will become significantly more competitive overnight, producers and dealers throughout Europe are preparing a marketing offensive in Croatia. German companies, in particular, will profit from the change. They are mesmerized by the prospect of 4.4 million new customers who are especially fond of German brands like Miele, Volkswagen and Adidas.

However, it is unlikely that the small country itself will benefit from EU accession in the short term. A deep economic crisis has battered Croatia for the last five years. Government debt is growing rapidly, and two rating agencies have already downgraded Croatian bonds to junk status. As such, the country will probably have to be subsidized from EU coffers for the foreseeable future.

And even in the relatively young nation on the Adriatic Sea, enthusiasm for Europe has cooled considerably, with little evidence of optimism. Polls show that only 39 percent welcome the accession to the EU, which the Croats fought for through 10 years of tough negotiations with Brussels. "We feel like an uninvited guest who shows up too late for the party," says a banker in one of the street cafés in Zagreb, the capital.

Of course Croatia, part of the Habsburg Empire for centuries, belongs to Europe. But the hope that the fulfillment of a long-cherished dream would also bring Western European affluence to the country has fizzled. "There won't be a miracle," Croatian President Ivo Josipovic has warned.

In fact, the dream of Europe is likely to become a nightmare for many. More than half of young Croats are unemployed, and the overall unemployment rate is about 20 percent. Tough competition from the EU will drive many obsolete companies out of business once and for all.

At the job center on Zvonimirova Street in downtown Zagreb, the women behind the counters efficiently process long rows of people. A young woman standing in line says she has to report to the job center once a month.

Krunoslav Ostojic, 43, is reading the employment ads outside the job center. He was born and went to school in Germany, and he later fought in the Yugoslav civil war. "I love my country," he says, "but I have to live." The job center once found him a position as a taxi driver for a company that was three months behind in paying its employees' wages.

Ostojic is waiting until July 1. "Then I'll leave," he says. A roofing company has offered him a job in Goslar, a town in the northern German state of Lower Saxony, but he is having problems with his German work permit. While Bulgarians and Romanians will be allowed to work in Germany without restrictions starting in 2014, the Croats will have to wait at least another two years.

Milan Končar lost his job as a logistics expert with Končar, an electronics company, in April. Next month, his unemployment benefits will decline to only 35 percent of his last after-tax wages, and after a year the benefits will cease altogether. His former employer is a semi-governmental company located in park-like surroundings in Zagreb. Končar's business includes building hydroelectric plants, generators and streetcars.

The future looks grim. Many Croatian companies have already lost the fight. Because of the relatively high wages and lack of investment in Croatia, they are hardly competitive in Europe. Even Greece, Bulgaria and Romania are in better shape, according to World Bank statistics.

Still, Croatia has a long industrial tradition and many well-trained workers. "In the medium term," writes Deutsche Bank in a new study, EU accession could give a new boost to the Croatian economy through improved access to European markets, provided the country finally addresses its structural problems.

On the other hand, Croatia doesn't sufficiently exploit its potential. Corruption remains widespread, and parts of the political elite defend their old perks. A third of the workforce is still employed in the public sector. Entire stretches of countryside are also uncultivated, partly because of bribery among regional officials.

Only the food sector has a promising future. Croatian tangerines ripen four weeks earlier than elsewhere in Europe. Cherry lovers consider Maraska cherries to be the best in the world. The Istria region produces about the same number of truffles as Italy. Nevertheless, Croatian products hardly make it onto the European market. In fact, the country so richly blessed with natural beauty regularly becomes a net importer of food products during the main tourist season.

The loyal German, English and Italian tourists, the most reliable suppliers of euros for Croatians until now, demand entertainment. Tourism experts like Gunther Neubert, managing director of the German-Croatian Chamber of Commerce and Industry, believe that hiking vacations and gourmet tours could provide an additional source of revenue outside the main season in July and August. But entrepreneurial vigor is often met with suspicion in Croatia.

Tourism and agriculture alone will not be enough to maintain a stable standard of living in Croatia, though. The EU negligently overlooked the structural problems during accession negotiations. Even a government representative says: "The economy urgently needs to be de-bureaucratized." But experience has shown that the desire to change quickly wanes after a country has joined the EU.

Money from EU funds will be needed once again. This year, the EU is already setting aside €655 million ($860 million), or about 1.5 percent of the country's gross domestic product, for Croatia. Some €13.7 billion has been earmarked for adjustment measures between 2014 and 2020. The Croats have established a separate ministry, run by the deputy premier, to handle the distribution of EU money. They want to use the fresh capital to renovate their railroad lines. And, in five years, the EU flag will also be flying in front of many new sewage treatment plants.

But will this kind of aid help the country advance? Even more important to Croatians than sewage plants is the funding for a bridge over the Adriatic Sea. Dubrovnik and a strip of land along the coast are cut off from the rest of Croatia because Bosnia-Herzegovina wanted its own access to the sea during the peace negotiations to end the civil war. And because it will be some time before Bosnia becomes an EU member, goods and people must now cross the EU external border twice to reach Dubrovnik.

That's why Croatia wants the EU to finance a bridge leading from the enclave on the Croatian peninsula of Pelješac off the coast of Dalmatia. It would mean that Croats would no longer have to travel through Bosnia, a country they view with hostility. Brussels experts are even seriously considering a tunnel. After all, sometimes you've got to treat yourself.